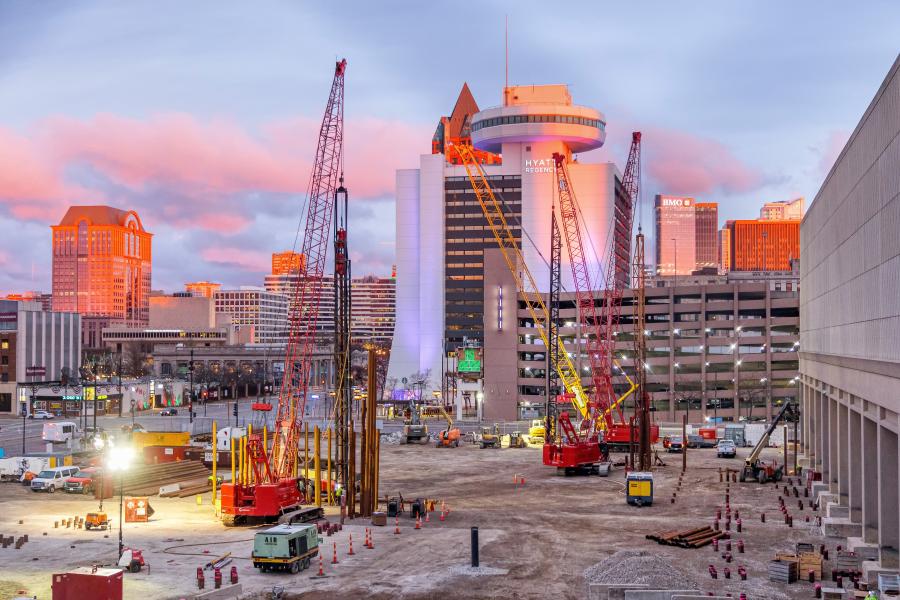 In Milwaukee, site work is well under way on a $420 million undertaking that will double the square footage of the Wisconsin Center. (C.D. Smith Construction photo)

In Milwaukee, site work is well under way on a $420 million undertaking that will double the square footage of the Wisconsin Center. The expanded facility is expected to be completed in the first quarter of 2024. 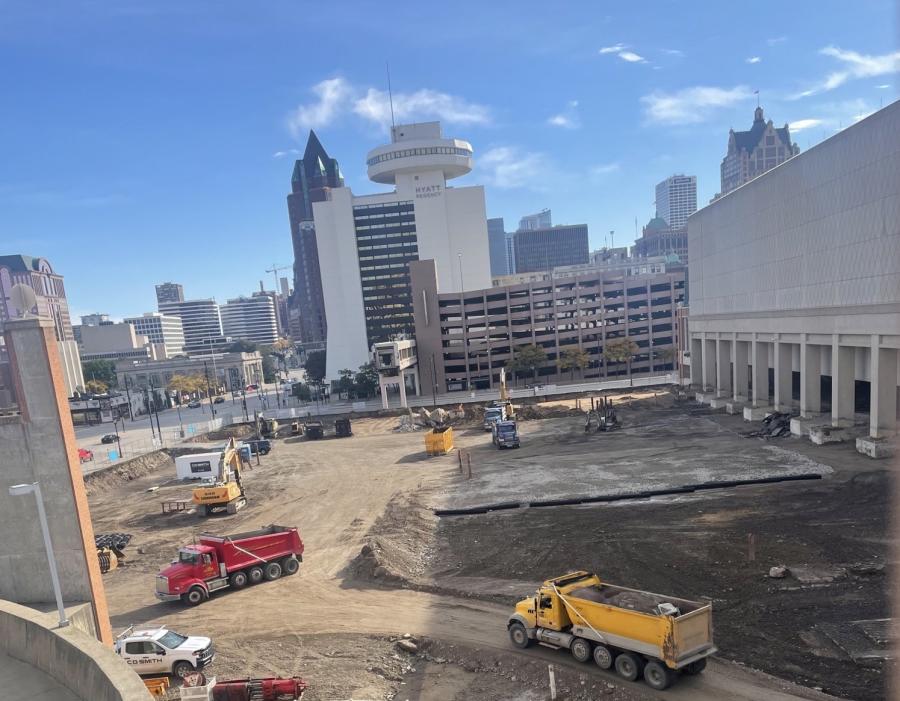 "While of course we would love to welcome bigger conventions and clients into Milwaukee, the real purpose of the expansion is to allow the Wisconsin Center to enhance what we already do really well. By doubling the square footage, the Wisconsin Center will be able to host multiple, simultaneous and overlapping events, which will in turn create an increase in hotel occupancy and a steadier use of Milwaukee's restaurants, bars and other world-class amenities."

The Wisconsin Center will offer 52 flexible meeting rooms; 300,000 contiguous sq. ft. of exposition hall; two ballrooms (including a new rooftop space with outdoor terraces and city views); 22 loading docks; and a sophisticated Wi-Fi and IT infrastructure.

The changes are expected to generate $12.6 billion in economic impact over 30 years. More than 2,300 full-time equivalent jobs will be created directly linked to the expansion, which is happening at a critical time.

"At the height of the pandemic, the Wisconsin Center expansion project was cued up and shovel-ready. We are prepared to pump more than $100 million in construction wages into the city that we love and be positioned as the most desirable convention destination in the nation as the world comes out of the pandemic.

"The Wisconsin Center sales team is working hand-in-glove with CAA ICON, the owner's rep, to ensure that our clients are as worry-free as possible, while enjoying our brand of bold, proud, experience-obsessed service. Once the expansion is significantly constructed, the south building will undergo its own renovation, ensuring that clients have a seamless experience, whether they're in the north or south side of the facility.

"In fact, the expansion project was awarded a ‘Focus on the Future Growth' award from the Metropolitan Milwaukee Association of Commerce. The senior leadership team at the Wisconsin Center District is so proud to participate in this project, not only for what it will mean for our business, but more importantly what it means for the position of the city we love as a must-see destination for meeting and event planners from around the world.

"We have a world-class architectural team out of Atlanta, and EAU locally, plus the construction management team of Gilbane-Smith on board. These groups are deep in the fabric not only of exceptional spaces, but of Milwaukee as a superb, captivating and buzzworthy destination. The expansion of the Wisconsin Center will fold into the vision of downtown Milwaukee beautifully." 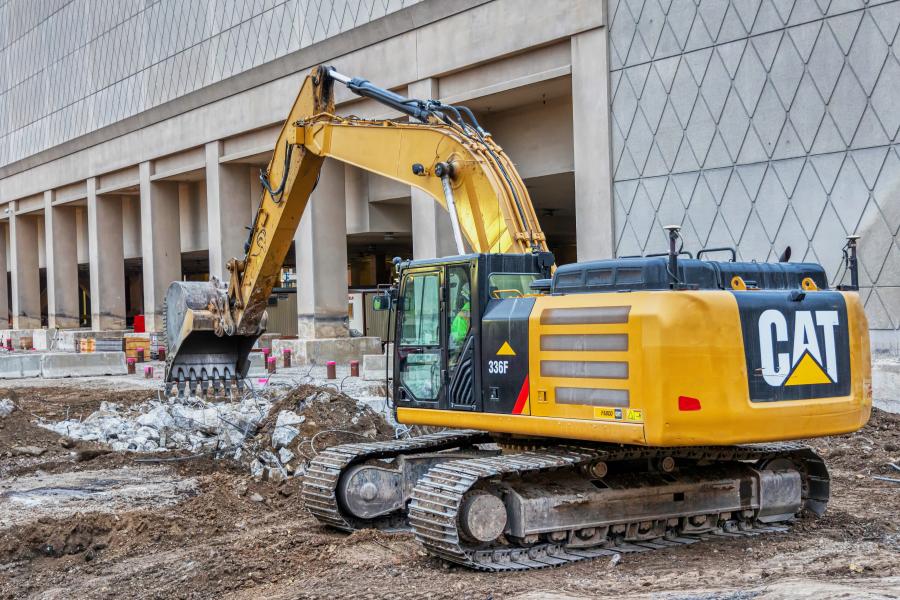 According to officials with CAA ICON, with any addition to an existing property, the challenge is to maintain convention center operations during construction and to limit the amount of utility outages and disruptions to the existing facility. The other major concern is that the existing site for the expansion has the remaining foundations from the original convention center still on site and underground, so from a design perspective, the goal is to design around that.

The site previously served as an asphalt parking lot. Crews have been working on the removal of existing grade beam foundations, as well as the existing skybridge structure to the adjacent Hyatt Hotel. They've also been performing overall site excavation.

As for demolition, one skybridge has been removed, and another is being designed and built in the same location, but at a lower elevation. Workers have already dealt with the existing parking lot and associated power and lighting.

The skybridge is being removed in two phases, with one of the sections being crunched/munched and the other section across the road to the Hyatt being separated on the Hyatt side and lifted out of the place by a crane to the ground, then processed on the ground. The overall project is approximately 30 months in duration.

Onsite material that can be recycled include concrete and asphalt. The goal is to achieve LEED Silver status and crews are doing so, in part, by selecting building materials that have recycled properties.

Cold weather, rain and wind are conditions that could affect the project, but the elements are planned for when building in Wisconsin.

Approximately 38,000 cu. yds. of dirt/material will be moved during construction. The existing site and parking lot was built up high over the old/existing concrete slab for the existing convention center. This lot was removed, and the site excavated several feet below the old slab to new design depths.

The concrete and steel activities will be the most time-consuming part of the project, due to the volume and high level of detailing involved. Construction milestones include the start of deep foundations in mid-November, and the completion of steel erection in spring 2023. 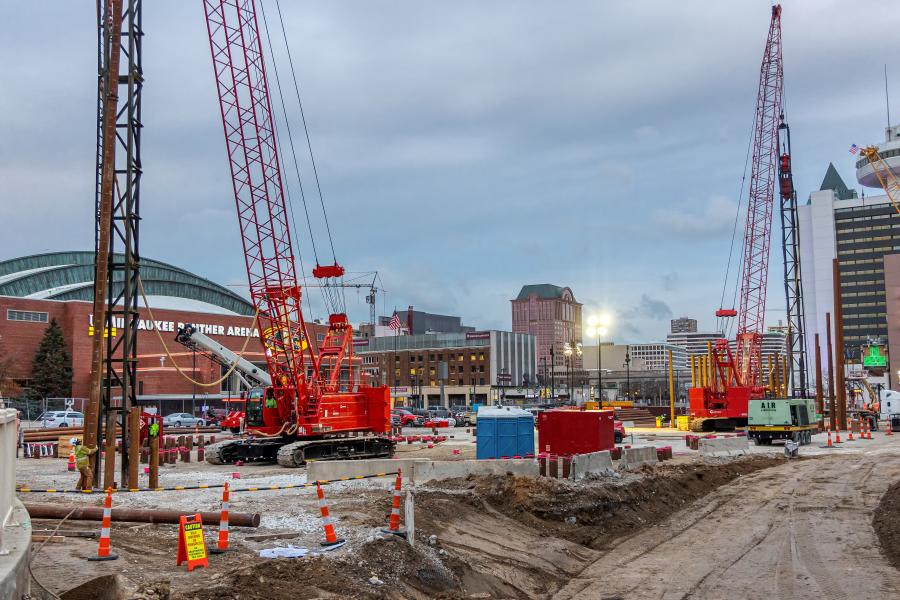 One of the other major challenges tied to the project buildout is that workers are building up and underneath the existing third floor exhibition hall with a new parking structure and meeting rooms. This involved a large exterior drywall soffit removal, as well as relocation of existing underfloor floor drains, air lines, water lines and heaters. Part of the expansion also calls for the removal of the north exhibit hall exterior wall, which is precast concrete. A new temporary exterior wall will be built within the exhibit hall first, then the existing precast wall panels will be removed.

While much work remains. Maio and others involved in the project are pleased to see their vision one step closer to becoming a reality.