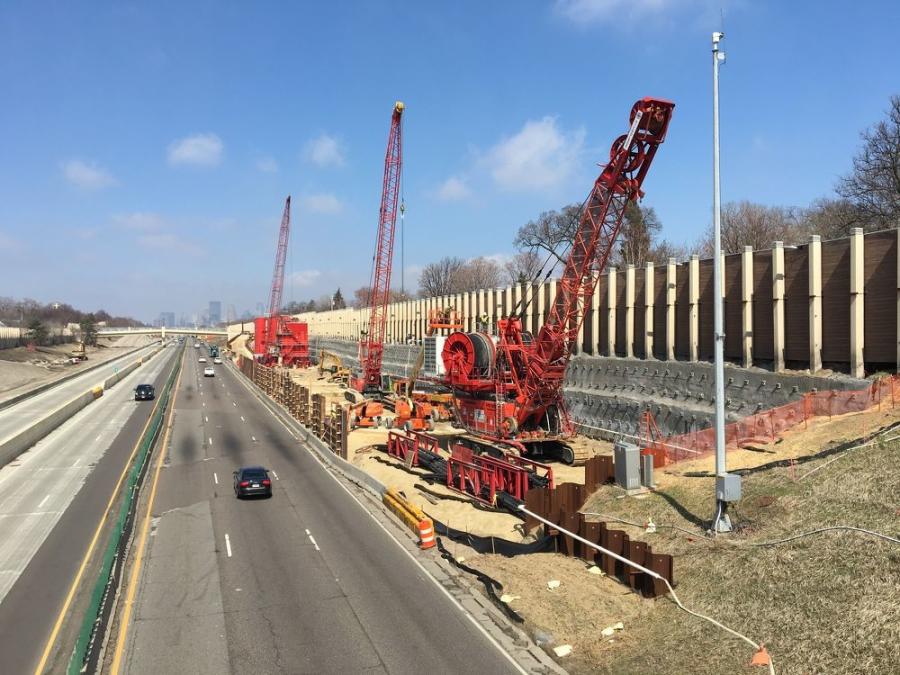 The Minnesota Department of Transportation is overseeing a $64.5 million project that will use giant underground stormwater tanks designed to ease flooding on a busy freeway in south Minneapolis. (MnDOT photo)

The Minnesota Department of Transportation (MnDOT) is overseeing a $64.5 million project that will use giant underground stormwater tanks designed to ease a dangerous condition. The completed undertaking will help reduce frequency and severity of flooding on a busy freeway in south Minneapolis.

The project is a joint venture between Kraemer North America LLC of Burnsville, Minn., and Nicholson Construction Company of Cuddy, Pa. (KNJV).

"This is a major project for MnDOT," said Aaron Tag, MnDOT metro west area engineer. "We are using construction techniques that have not been used before. The work area is small and adds to the challenges."

The tanks are being built to store water during extreme rain events.

"The tanks are 80 feet deep and 40 feet wide. They will collectively be able to hold 4.5 million gallons of water. That is equal to seven Olympic-sized swimming pools."

The effort is partly in response to June 2010 flooding that affected I-35W near 42nd Street, when a downpour left the interstate impassable. Some motorists pushed stalled vehicles to safety, while others waited for the water to recede.

MnDOT has budgeted the next four years to have the tanks built and put in place. Work started in the fall of 2019. It coincides with major construction already taking place on I-35W, including a new pedestrian bridge at 40th Street, according to Tag.

"The two projects are working closely and coordinating efforts. The supervising engineer for MnDOT is overseeing both projects. They are looking at opportunities to be efficient and avoid conflicts."

Construction is taking place on the east shoulder of I-35W northbound and between 40th and 42nd. The entire project access was constructed on an early work package of $8,000,000 late last year, so that the primary construction package could begin in January 2020. 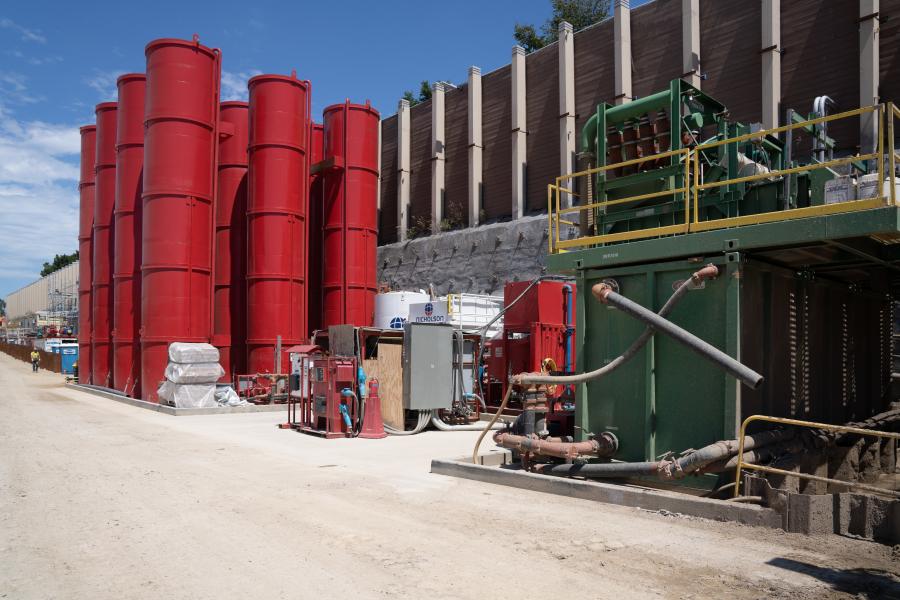 Project access is highly limited on the 72-ft. wide by 1,200-ft. long site located between 2nd Avenue South and the freeway shoulder. The work calls for constructing the concrete-lined stormwater storage tanks 47-ft. diameter by 84 ft. deep, built using diaphragm wall construction techniques. Temporary stormwater storage of 4.5 million gal. will allow for prevention of flooding on I-35W for up to a six-year storm event.

According to Aaron Rosenbery, project manager, KNJV, the biggest overall challenges on the job are constructing the diaphragm walls in extremely dense layered cobbles and boulders located under an intense layer of sand and clay above.

The project was designed and planned to have no impact on traffic. Tasks completed so far include mobilization and 80 percent of diaphragm wall construction.

"Diaphragm wall construction is the sole focus at present," said Rosenbery. "Once diaphragm walls are constructed, there will be a four-week demobilization program for this equipment and new work will begin immediately involving jet grouting lower and upper passageways, which is required in order to perform future tunneling between tanks.

"Depressurization wells will be installed after jet grouting and then dewatering testing will be done prior to excavation of the interior of tank cells. The depressurization is needed in order to excavate the six tanks — two at a time — in the dry. There's approximately 36,000 cubic yards of interior mass excavation planned."

Obstacles to the project are dense layered obstructions, which are difficult to excavate with the hydrofraise equipment and Stein-Greifer grab tools. 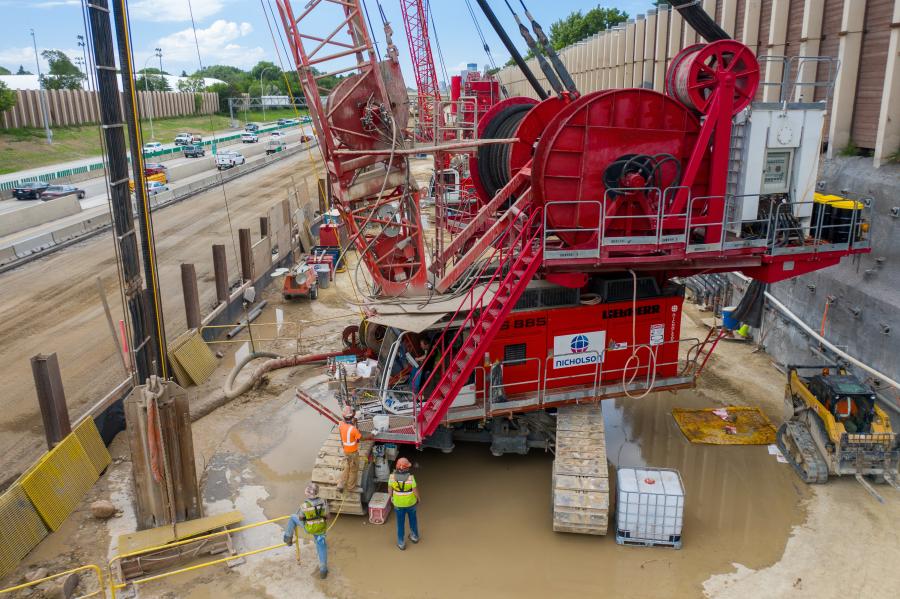 Challenging soils require the use of multiple chisels and drop hammers to break up boulders, along with substantial spare cutting teeth and bits for repairs to cutting wheels and clam jaws.

Two full-time welding crew members are utilizing Miller D400 welders to repair and maintain cutting equipment. One full-time mechanic is set up to support the diaphragm work with a 2019 F750 Ford mechanics truck supplied with a Miller Trailblazer welder.

During adjacent traffic operations, pinned barrier was installed along the I-35W northbound shoulder, as well as a joint venture-designed H-Pile and wooden splash wall to both avoid drivers' curiosity and allow for job site containment of materials.

"This piece of equipment is the result of a long-term partnership between the crane manufacturer Liebherr and French deep foundation group Soletanche Bachy. The transportation between the yard in Pennsylvania and the job site needed a fleet of 10 flatbeds, plus a special permit for the base machine. The machine is equipped with the latest technology concerning the monitoring of excavation verticality: Enpafraise 7.

Rosenbery noted that the Liebherr hydrofraise 885 setup is 140,000 lbs., with the two Stein-Greifer clam shell tools weighing 40,000 lbs. each.

Another main equipment type involves slurry management. Slurry is one of the main focuses for a diaphragm wall. This project called for a slurry mixer ABM; five sets of tanks for slurry storage representing a storage capacity of 160,000 gal.; a dozen different pumps to manage slurry circulation; a desander Sotres 450 able to treat 120,000 gal. an hour; a desilter Derrick to treat the silty materials and to finish a Derrick centrifuge from Clean Slurry Tech.

The monitoring of the slurry utilizes a remote electronic sensor system. All of the storage is equipped with the new system. 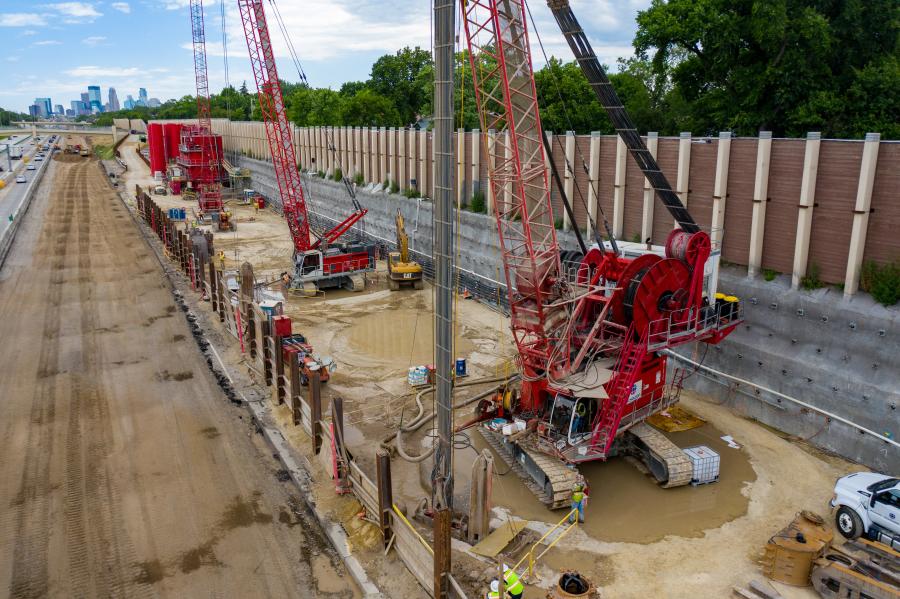 Prep work consisted of creating the platform to receive the heavy machinery between a steep hill and the highway. To achieve this, a soil nail wall was built to extend the width of the job site. This was part of a previous contract also run by KNJV. An access ramp also was built from the upper road to the jobsite elevation with a sheet piles retaining structure.

"A pump station will be constructed on the northern end of the sixth tank constructed and will allow for the safe removal and pump out of the storage tanks into the I-35W stormwater system, once the storms have passed," said Rosenbery. "A monitoring system will ensure that the storm water system can handle the 4.5 million gallons of discharge at a rate of 72-hour removal."

During construction of diaphragm walls, a standard crew of six quad axle dump trucks are used to haul/transport spoils off site. During nighttime operations, a crew of three quad axle trucks are used.

During future tank excavations, the crews will run double 10-hour shifts to ensure an efficient and timely excavation sequence.

During D-Wall operations, double shifts are being utilized in order to maximize efficiency of crews and also to avoid the onset of cold weather during late fall.

"The most time-consuming part of the work is the patience needed for the removal of the heavy and dense sands, soils, cobbles, boulders and layered obstructions," said Rosenbery. "The nearly continuous repairs and parts replacements are a constantly monitored situation." 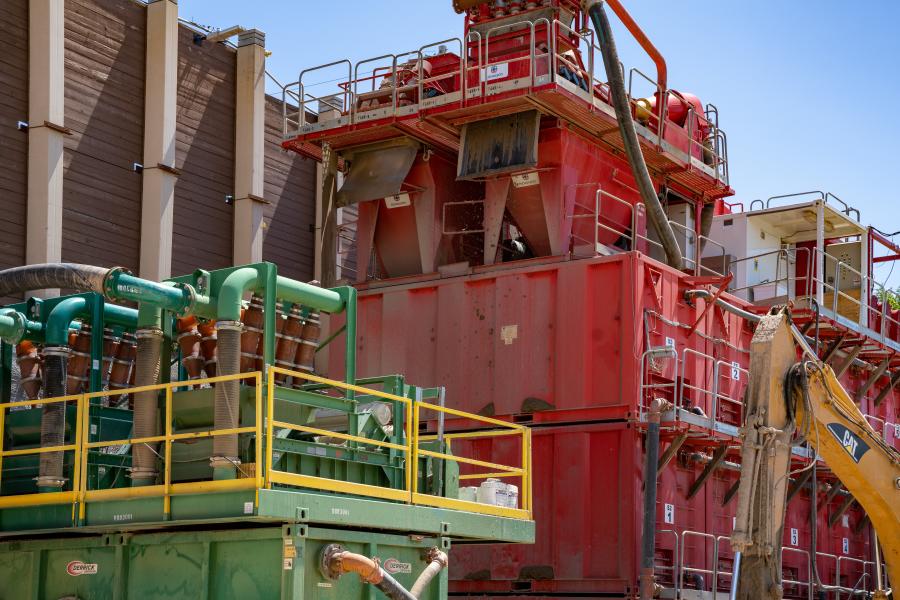 "This unique project is part of a construction manager general contractor style of project delivery sponsored by MnDOT," said Rosenbery. "The joint venture was formed on the basis of combining the national and international geotechnical expertise of Nicholson Construction, along with the local and national CMGC and heavy highway experience of Kraemer North America.

"MnDOT selected this joint venture over several other local competing firms back in June of 2018. The KNJV team assisted MnDOT and its design team of both Barr Engineering and Brierley Associates with the design development, constructability reviews, risk avoidance and overall project planning and scheduling."

The project has a scheduled completion date of June 2023. CEG