Mississippi Business Helps Contractors 'Fill the Gaps' in Their Projects 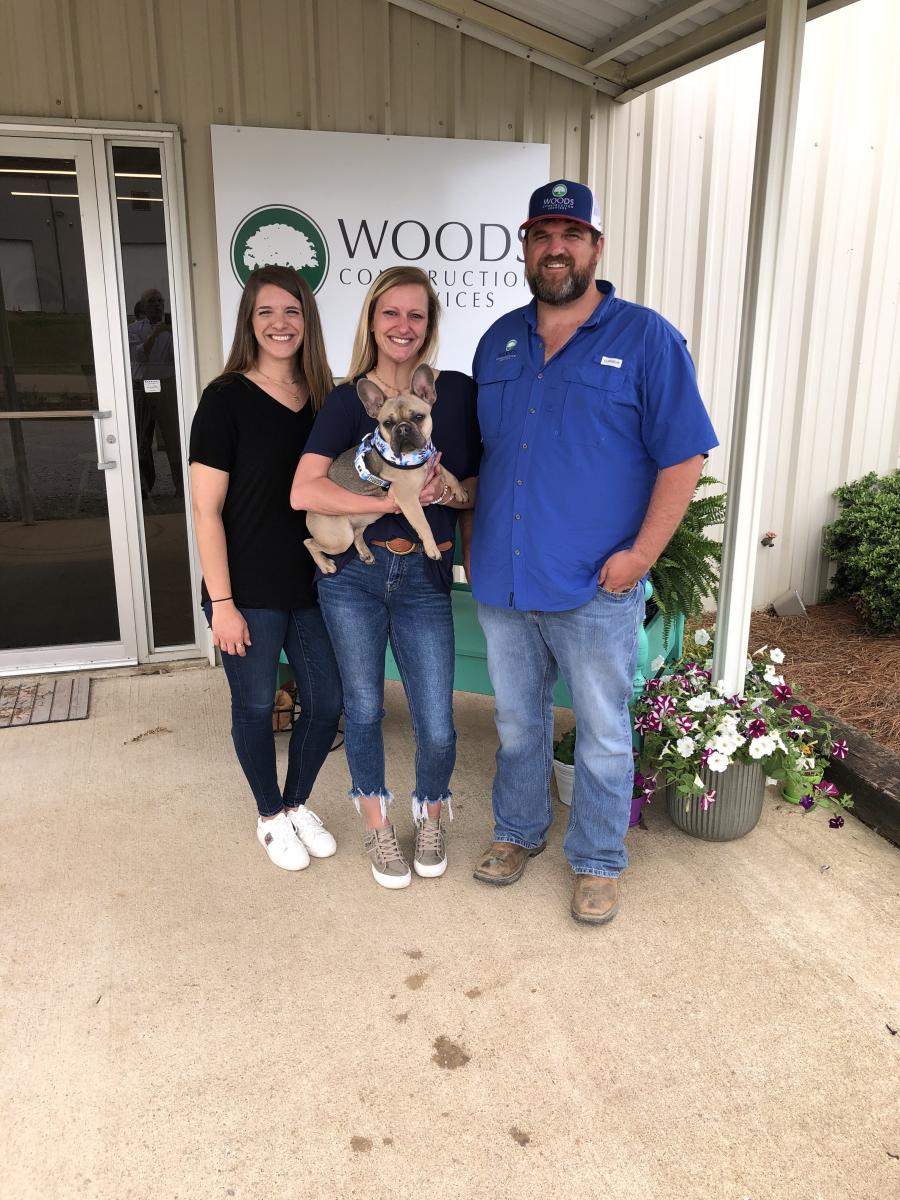 When Brian Woods decided to leave college early and start his own one-man construction service company in 2003, he began by performing one specific task for the general contractors that took a chance on him.

Woods had recognized that, as more and more subdivisions were being built in the Memphis, Tenn., area, builders were often missing a dedicated subcontractor to perform top-shelf erosion control on their projects.

Each succeeding job and the skill with which he performed his duties brought more name recognition for Woods among the GCs — ultimately leading to more career success for him.

Today, Woods Construction Services, based across the state line from Memphis in Byhalia, Miss., is busier than ever. Handling erosion control is still a major part of Woods' company, but a growing civil side to the business has led to a current total of 24 employees working in both states. Most of that work, he conceded, is done in the more populous Memphis area and other nearby parts of Tennessee.

When Woods got into the construction business, he viewed each project he took on as a puzzle. with he and his crews supplying the pieces needed to make each one whole.

"I just saw that what we had to offer filled a niche," he said recently from his Byhalia office. "There were pieces of a project that were left to be done by this contractor or that contractor and we began to come in and fill those gaps. From there, the company evolved when they began to ask us for more and more work on their job sites."

Woods Construction Services' erosion control operations are currently managed by Jim Sanderlin, with his colleague, Steven Wilburn, leading the company's civil enterprises. Woods considers himself to be lucky to have both professionals on his team.

"We do, what I call, a lot of mid-size commercial work like fast-food restaurants and gas stations, which includes one customer who builds eight to 10 gas stations a year," he described. "We are fortunate to do all his work as they are rather large stores with truck fuel docks. In addition, we have worked on several Freddy's [a hamburger and frozen custard chain], and Chick-fil-As as well as some animal hospitals and warehouses."

At each of these projects, Woods' company also installs sewer and stormwater systems, in addition to the always needed clearing and grading.

"It is a turnkey operation in that we do everything except the building itself and the landscaping," he said. "That includes, of course, the erosion control — all with the aim of keeping the client from calling other companies to get those jobs done."

To date, the largest project that Woods Construction Services has been contracted to work on is a 70,000-sq.-ft. warehouse expansion at Thermo Fisher Scientific's existing facility in Memphis. The medication supplier uses the space for cold storage.

"We did the pad and all the civil work, including running the fire line, putting in the stormwater management systems and the roof drains" Woods said.

When he first opened his business, the first pieces of equipment that Woods used to do his erosion-control work were a skid steer, a tractor, and a silt fence plow.

When he began to add to Woods Construction Services' menu of functions, such as clearing and grading light underbrush, he brought on a track hoe, a mulcher and a grinder. Later, he expanded his range of clearing services, along with his burgeoning civil projects, after he purchased a Link-Belt 75 excavator and a haul truck. 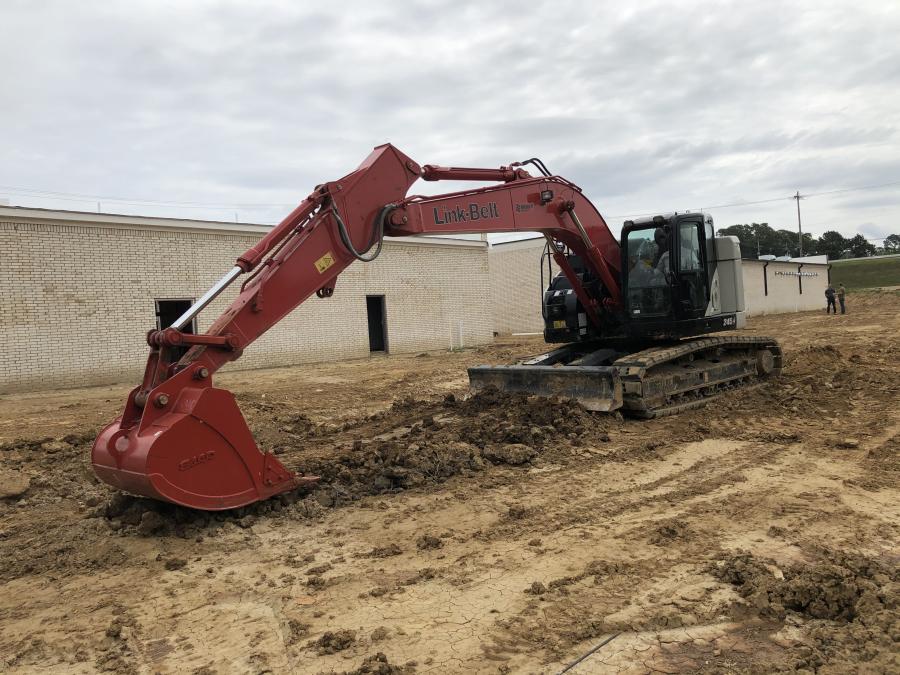 "That Link-Belt 75 was a 20,000-pound machine we used to help fill in those project gaps for various general contractors," he said. "We bought that big mini-excavator back in either 2005 or 2006."

The northern Mississippi contractor currently turns to Memphis-based Heavy Machines Inc. for many of its most-used machines and attachments.

From the full-service dealership, Woods has been able to stock his company with, among other pieces, three Link-Belt excavators, Fecon mulching machines, two Sakai compactors, and an ASV RT-120F compact track loader.

In 2020, Woods bought a Link-Belt 245 X4 excavator from Heavy Machines, a purchase that he said has worked out extremely well for his business.

"We are super-pleased with that machine," he said. "The versatility of that 58,000-pound rig is so great. Our pipe guys absolutely love it because it is strong enough to pick up the structures it needs. With the rubber tracks on it, they don't have to lay down plywood on the roads to access the work. It has been a huge addition to our toolbox."

Another advantage of the Link-Belt 245's rubber-padded tracks, Woods said, is apparent while installing underground utility projects. Even as the excavator totes heavy pipes, its movement does not damage streets and roads.

"With that machine, we have a coupler to go along with our 36-inch and 48-inch buckets," he said. "So, if they are digging dirt, they can switch to the big bucket to get the dirt out of their way and get it down to grade. Then they can put their other bucket on the 245 and begin laying storm drain, a water line or a fire line — whatever the job calls for."

His other Link-Belt excavators include a model 210, which Woods said is equipped with a thumb on it; and a smaller model 80.

"That small machine is never here at the office because the guys use it constantly," Woods said. "It has rubber tracks, a hammer, a thumb, and uses both a 36-inch and a 24-inch bucket. When we do light demolition for certain remodeling contractors, that is the machine we use. It is somewhere every day and has proven to be a very versatile piece of equipment for us."

The company also has paired the Link-Belt 80 with a Fecon-brand mulcher to carry out many of its clearing and grading contracts.

Woods said his experience has taught him that Fecon provides the best cutter heads for the money and have proven to be durable despite working in often brutal conditions.

For its Sakai machines, Woods said that his firm has both padfoot rollers for uniform compaction and shell kits to convert its smooth drum rollers into padfoot compactors.

"We like Sakai because of the great service we get from them," he said, adding, "They are the only rollers we have ever had, so I can't say I have anything else to compare them to. But we have never had any issues that would make us try something else. We have also enjoyed the great availability of their parts. One of our Sakais has around 1,200 hours on it; the other has 700 hours."

That same rough, tough reliability is also what Woods finds so appealing about owning the ASV RT-120F compact track loader. His company equips it with Fecon cutter heads during clearing work.

"[The ASV] has been a great machine and we now have 2,000 hard hours on it," he said. "We don't use it for anything other than mulching and often in tough working conditions. The ASV has provided us with good up time and productivity. From the research I have done on skid steers, without stepping up to a purpose-built carrier, I don't think there is a skid steer-style machine on the market that can compete with it. The RT-120F has more hydraulic holding capacity, and the radiators and coolers are huge."

One of the key reasons that has kept Woods Construction Services coming back to Heavy Machines time and again, Woods said, is the high level of product support and service, a refrain heard from most customers of the Memphis equipment dealership.

Woods said that he, too, was drawn to Heavy Machines because of its reputation, but also because he knew Eric Hinshaw, the company's vice president and general manager; and Paul Jones, its sales manager.

"Then, once I got over there, it was obvious [Heavy Machines'] service was outstanding," Woods said. "They are very attentive to their customers. We also like how helpful they are when we have problems. If they have anything available, they will get us a machine to use while ours is down and in for repair."

In the few times Woods' company has had an emergency due to a faulty piece of equipment, Heavy Machines has always come up with a quick solution to get the contractor up and running again. 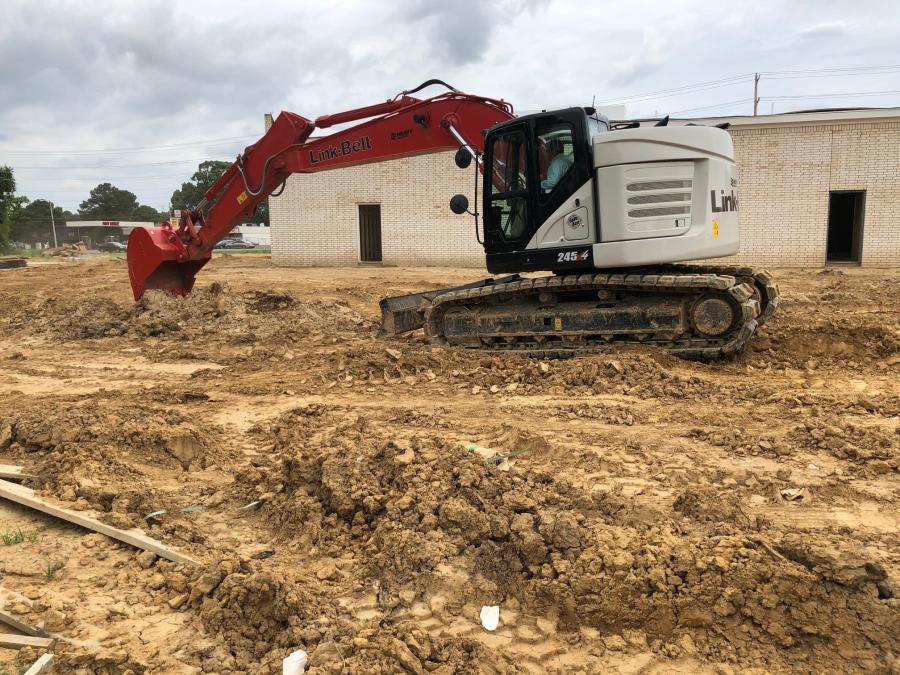 "One time, we had some bad fuel or something, although we are not really sure what had happened," he said. "I called Paul [Jones] on a Sunday when we were in a pinch. I asked him, ‘Man, do you know any contractors that might have a set of filters for our trackhoe? Can you help me out because we need to roll?' He told me his truck was nearby in Collierville, Tenn., and the toolbox was unlocked. Inside was a brand-new set of filters that he kept there. So, I drove there, picked up the filters, took them to the job and we were working again in one hour.

"If they had been just another vendor, we may not have been able to get back to work on that job until Monday morning."

It could be, too, that Woods Construction Services has also learned from the 50-year-old Heavy Machines distributorship just how a great business is operated over the long term and what is needed to keep its customers happy.

"We strive to provide the best service that we can," Woods said. "Simply put, we want to do good work, so we spend a lot of time making sure that what we do is correct and performed the right way. We take a lot of pride in the jobs that we do for our clients."