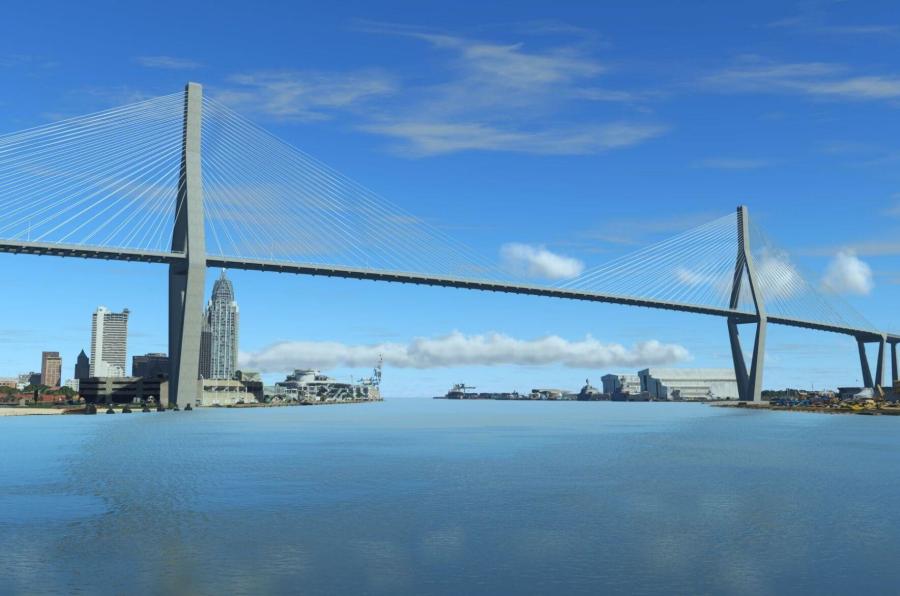 Officials on the Alabama coast have resurrected a $2.1 billion plan to build a massive Interstate 10 bridge spanning the Mobile River and expand the highway across Mobile Bay.

Mobile and Baldwin County officials on Dec. 15 voted to revive the original concept for the I-10 Mobile River Bridge and Bayway project, but with a cheaper toll and a toll-free route through the Wallace Tunnel.

Toll opponents who killed the project in 2019 said they remain opposed to any user fee, even a reduced one, but state officials have said that these charges are the only way to both fund the building project and maintain the bridge and reconstructed roadway.

The Metropolitan Planning Organizations (MPO) for both Mobile and the eastern shore of Baldwin County, assembled for separate meetings before deciding to make a request to the Alabama Department of Transportation (ALDOT) to push the bridge and road effort forward without the large tolls that doomed the plan two years ago.

Several area news outlets reported that toll prices would be limited to $2.50, down from as much as $6 under the previous plan, and a free route across the heavily traveled northern end of Mobile Bay would still be available through Wallace Tunnel and existing roads.

In approving a framework for the I-10 project, Mobile and Baldwin County leaders said the construction is vital to easing congestion and improving safety along the busy east-west route linking Jacksonville, Fla., with Los Angeles.

"It is truly a historic and happy day not only for the region but the nation," said Jack Burrell, chair of the Eastern Shore MPO's policy committee, at a news conference shortly after the twin voting sessions were concluded.

Mobile Mayor Sandy Stimpson explained that there was a sense of urgency behind the votes because Alabama risked losing a federal $125 million Infrastructure for Rebuilding America (INFRA) grant, set to expire in September 2022, if the project was not in the pipeline. State officials told AL.com that the monies represented "one of the largest grants" ever awarded under the INFRA program.

In addition to those funds, the state has pledged $250 million, and a $300 million federal loan would be repaid with toll revenues.

Officials had hoped the I-10 project would be eligible for funding through the $1.2 trillion Infrastructure Investment and Jobs Act (IIJA) that was approved by Congress and signed by President Joe Biden in November. But an ALDOT official confirmed to AL.com recently that no "mega-projects" would receive much funding under the federal act.

Toll Prices Have Been a Key Issue

Local and state leaders also have said the Wallace Tunnel will remain toll free, which was a point of contention in 2019 because ALDOT officials claimed few people would utilize the tolled routes if the tunnel remained free for motorists.

Under the new scheme, tolls would be charged only on the new bridge over the Mobile River and a newly constructed and elevated Bayway that would extend from Mobile to U.S. Highway 98 in Daphne.

The 2019 plan assessed the toll at $6 for a one-way trip, an amount that was deemed too steep by local officials. The newest toll request could be as low as $2.25.

Kevin Spriggs, a businessperson based on the eastern shore who has followed the I-10 project closely over the years, said he hopes ALDOT commits to making up any differences on the project if the toll revenues from a lower user fee amount is not enough to pay off the bonds to build the structure.

"How will the state maintain reoccurring funding if the tolls only bring in 50 percent of the bond allocation?" Spriggs said to AL.com. "Are they willing [to agree to support the project]? If that is the real commitment, then I think we have a project."

Both MPOs added the I-10 project back into their plans last June, and discussions about an alternative to the original proposal have been discussed for months. The most high-profile choice was the construction of a truck-only toll bridge, but that plan was opposed by the trucking industry and has since been reassessed to include a toll bridge accessible for all vehicles.

Construction Period Should Be Much Shorter

With the I-10 Mobile River Bridge and Bayway seemingly on a more focused building timeline, instead of work lasting 25 years or longer, the new plan would reduce the construction period to about five years, local officials told AL.com.

Once work does get under way, replacing the I-10 Bayway must adhere to the 2008 guidelines established by the American Association of State Highway Transportation Officials (AASHTO) that requires the structure to be lifted "well above" 100-year flood elevation levels. A rebuilt Bayway also would need to be elevated above the current structure to respond to the bay's rising sea levels and the effects of climate change that include severe winds, floods and storm surge.