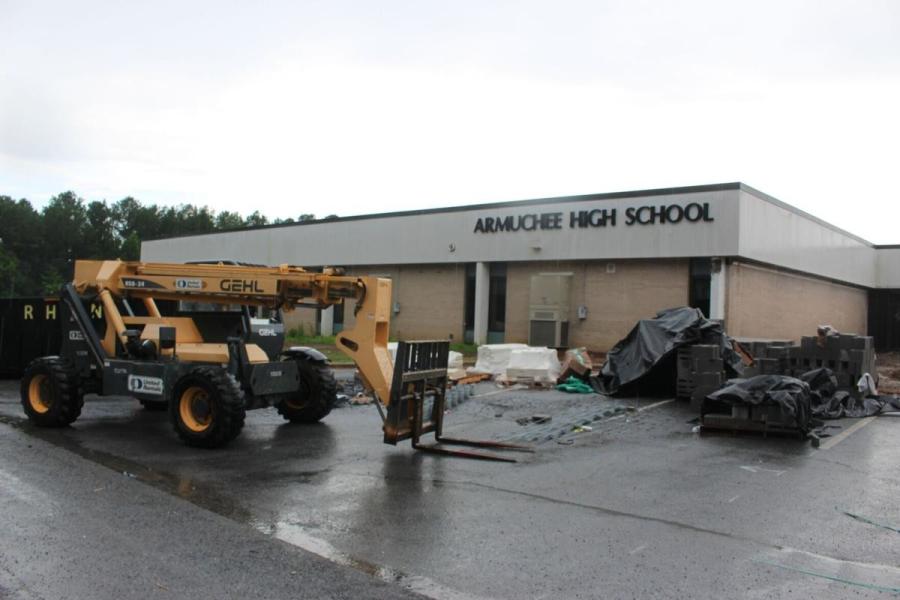 Workers are fixing up the exterior brickwork to match the new gym at Armuchee High School. (Rome News-Tribune/Olivia Morley photo)

Students returning to northwest Georgia's Armuchee High School next semester will be coming back to the same building, but one with a brand-new look.

Gainesville-based Carroll Daniel Construction has been renovating the exterior of the building as part of a $31 million modernization project, located just outside Rome.

Recently, crews could be found working on matching the new gymnasium's brick exterior, as well as expanding the canopies and adding cupolas to give the building a more eye-catching look.

"They just finished the brick veneer on that this week and took down the scaffolding," Floyd County Schools (FCS) Facilities Manager Jack Gardner told the Rome News-Tribune in early July.

He has been overseeing the Armuchee improvement project, which includes a new roof and a complete renovation of the school's exterior and interior.

Originally, the effort was funded as a $25 million education local option sales tax project, according to Superintendent Glenn White, but over time, with increasing inflation costs and special grants from the CARES and American Rescue Plan Acts, the Floyd County school board boosted the budget by another $6 million.

Since FCS has more high school classrooms available across the school system, the Georgia Department of Education said it cannot help with any reimbursements for a new Armuchee building. So, the county school board decided instead to do a complete overhaul and renovation of the facility.

Gardner noted that concrete pours were done shortly before he spoke with the News-Tribune, adding, "We [also] tore down the old sign on [U.S.] Highway 27, and the brick and block masons started doing the block work for the new sign."

The exterior work is expected to be finished before the school year starts, as well as the new paint inside the building.

Eventually, the contractor will begin renovating the interior of the building and do a "ceiling up" renovation, he said, meaning everything between the ceiling and the bottom of the new roof will be replaced.

"We'll have all new lighting, burglar alarms, fire alarms, [as well as an updated] sprinkler system, intercom system and cabling," Gardner remarked to the newspaper. "There's about 40 years' worth of old equipment and stuff in there."

The interior modernization also will include a new backup emergency generator, heating and air conditioning system replacement, and an eventual renovation of the high school's auditorium.

All interior remodeling is estimated to be completed by the end of the summer 2022.

Since the building will be in use during the upcoming school year, most of the construction will be done after hours and at night.

"Anytime the students are out of school, like winter break, [crews will] work during the day, but during the summer, we're asking the contractors to add more workers so that we'll have two shifts working on the school," Gardner said.