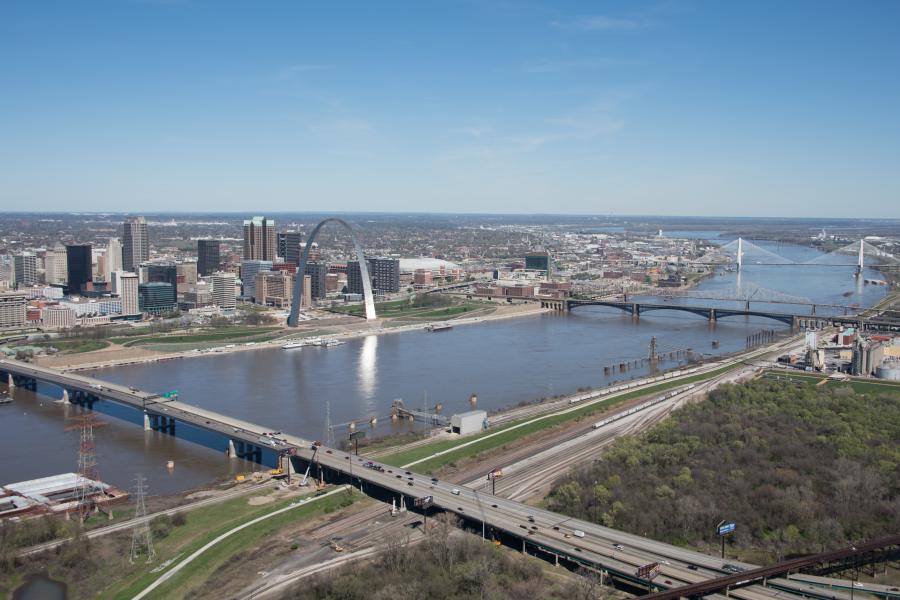 The project is being funded by the Missouri and Illinois departments of transportation. The work started in 2015 and will be completed in the late fall of 2018.

“One of the primary goals of the project is to improve safety on the bridge by reducing congestion,” said Michelle Voegele, MoDOT's area engineer of St. Louis City. “Before the project began, traffic heading between St. Louis City and Illinois could back up for several hours. Since the roadway was exceptionally congested, we saw increased levels of rear-end crashes along the bridge as drivers approached the congestion.”

The bridge renovation, new driving surface and ramp improvements should extend the bridge's usable lifespan for about another 50 years.

The need for this work was recognized in the early 1990s by regional leaders, and in 1992, MoDOT and the Illinois Department of Transportation carried out an environmental study to find solutions. The study clearly identified the Poplar Street Bridge (PSB) as a central part of the solution and revamp.

“The PSB was one of only two bridges in the nation that carry three interstates [I-70, I-55, I-64] across a river,” according to the web page for the project. “The PSB was built in the 1960s and was never meant to carry the amount of traffic it does today. It was designed to 1960 standards and for today's traffic, the ramp radii are too sharp, and there is not enough room between the exits and entrances thus causing major weaving issues.

“This is the reason the accident rate at this location is three times greater than a normal interchange and why trucks periodically overturn on the ramps. The study recommended building a new river bridge to the north and making substantial safety changes to the PSB.”

In 2001 following extensive public discussion and studies and E/W Gateway approval, both DOTs received a Record of Decision (ROD) from the FHWA to move forward with the New River Bridge project to build a New I-70 River Bridge about one mile north of the PSB.

“Once I-70 was relocated to the new bridge, the PSB would only carry I-55 and I-64 traffic,” according to the website. “As a part of that approved plan, the MO interchange on the PSB was to be rebuilt to eliminate the I-70 connection and build dual I-55 ramps in its place. In the mid 2000s, when both states realized that neither state could afford the nearly $2 billion New River Bridge project, the EIS was revised to build the project in functional phases.

“The first phase, which is the four-lane Stan Musial Veterans Memorial I-70 bridge, opened in February 2014. Now that the new bridge has opened, MoDOT has started work to replace the PSB ramps, including removing redundant ramps. By removing the redundant I-70 ramps, MoDOT could make room for dual I-55 ramps that would greatly enhance safety issues on the PSB and almost eliminate the congestion on all the interstates in the area.”

However, concerns were raised that eliminating the I-70 ramps from the PSB could negatively impact the Sauget area in St. Clair County — close to three percent of the traffic using the PSB travels to and from the Sauget area. To find a solution, the East West Gateway Council of Governments hired HDR Engineering Inc. to find an option for needed improvements to the PSB that would maintain and improve travel options for those traveling to Sauget.

In September 2012, the Gateway Council approved the funding for the Poplar Street bridge project based on three phases of work — two designed and managed by MoDOT:

2) Construct a connector between the Martin Luther King Bridge and Route 3 (Illinois project); and

3) Extend the third lane on eastbound I-64 across the Poplar Street Bridge by widening the bridge, according to the site.

IDOT's project to construct a ramp from MLK to westbound I-64 is ongoing and should be completed this summer. The project has resulted in lane closures around MLK and I-64, and the construction of the ramp from northbound I-55 to the PSB, along with a fifth lane being added across the PSB, started earlier this year is expected to be completed in late 2018. The work will result in one-lane access to the PSB from northbound I-55 during construction and weekend ramp and lane closures on the bridge.

Other elements include improvements to the eastbound bridge (eastbound I-64/northbound I-55) over the Mississippi River and the placing of a new overlay on the bridge — similar to the work completed in 2015 on westbound I-64 — and widening the ramp from northbound I-55 to the bridge.

The bridge carries approximately 100,000 cars and trucks daily and due to the complexity and multi-year nature of the work, the schedule was carried out to minimize impacts, according to Voegele.

“We continue to urge patience as we continue through this project,” said Voegele. “We have a major ramp closure and significant lane closures on the eastbound bridge through the remainder of this year. We'll continue to share information with the public on the anticipated impacts of construction on this major river bridge between Illinois and Missouri. One of the keys to the success of this project has been the cooperation between IDOT and MoDOT. We continue to work with them to coordinate work zones on both sides of the Mississippi River, as well as the daily impact for Illinois commuters.”

A unique element on the project will be added in 2018, when engineers slide the eastbound lanes to the north to add an extra lane. Currently, the eastbound and westbound bridges are separated by about eight feet. This “slide” will close the gap between the two bridges, and give engineers the opportunity to add another eastbound lane on the bridge.

Tom Huster, president of KCI, pointed out that the Mississippi River is a major and constant challenge that can never be overlooked.

“Dealing with river levels is an issue. The river came up recently and we had to get off the river soon after we had placed barges to start on that work,” he said. “The scope of the job is pulling the overlay off the existing bridge and replacing it one lane at a time and you're doing that in multiple stages while you have traffic going by you. Just with the coordination and only working in a 10 to 12 foot lane at time is also a challenge, and material deliveries and access is another issue to deal with.

“The biggest challenge will be sliding the bridge and then adding a lane on the inside between eastbound and westbound bridges,” he said. “This is a first for our company, but we hired Mammoet, a bridge sliding expert to help us with the slide. Sliding a 2,000-foot-long bridge all at once is not something you do every day. MoDOT gives us a weekend to do the slide — Friday night to Monday morning, but we are hopeful with proper planning we can get it done quicker.”

The slide will require a large crew and equipment such as hydraulic ram systems, with a ram on each of the six bents, all of which are tied to a central manifold so that they all move simultaneously.

“For the road widening, resurfacing and general bridge work,” said Huster, “that's something we do every day, so other than coordinating traffic, it's not a big deal.”

KCI monitors river levels daily, knowing that rain in the northern part of the Mississippi could impact the work site days later. Crews are prepared at a moment's notice to evacuate the area and remove tools and equipment to safety.

KCI's project manager is Ron Roellig, with Justin Stanford serving as the overall superintendent, who's responsibilities include manpower, and coordinating the subcontractor and suppliers on site.

The amount of materials being removed is still being determined.

“The work is currently a day operation,” said Stanford, “but at one point it will be day and night shifts due to the work for the overlay. We're able to shutdown an extra lane in off-hours, which will provide better access for crews and materials at night. We should be working on this project year-round.”

KCI's main yard and warehouse is 10 mi. from the job site, with mechanics coming to the site as required. The firm's fleet is worth about $6 million and many of the vehicles are still under warranty.

“Good relationships with dealerships are fairly important in order to get the best deals and for customer service in general,” said Huster. “If something goes wrong on a piece of equipment, these relationships are valuable to us.”

“We're starting to go more that route,” said Huster, “but a lot of our equipment is little bit older. We've started selling equipment while it still has value. We used to hold onto it until we ran it into the ground, and then eventually realized that maintenance costs were outweighing the benefits of having it.”

Over the past few years, KCI has made it a point to better adopt best practices in all facets of company activities, and this is paying dividends on the bridge project.

“We simplified the bridge slide, which made us more competitive on the overall job,” said Huster. “I don't know what the other teams were doing, but we're not doing this slide as designed — we came up with our own system that was simpler and cheaper. MoDOT appreciated that. We went through a value-engineering process with MoDOT and the design team after the contract was awarded to come up with ideas to simplify things and cut costs. We work through that process and we share the savings.”