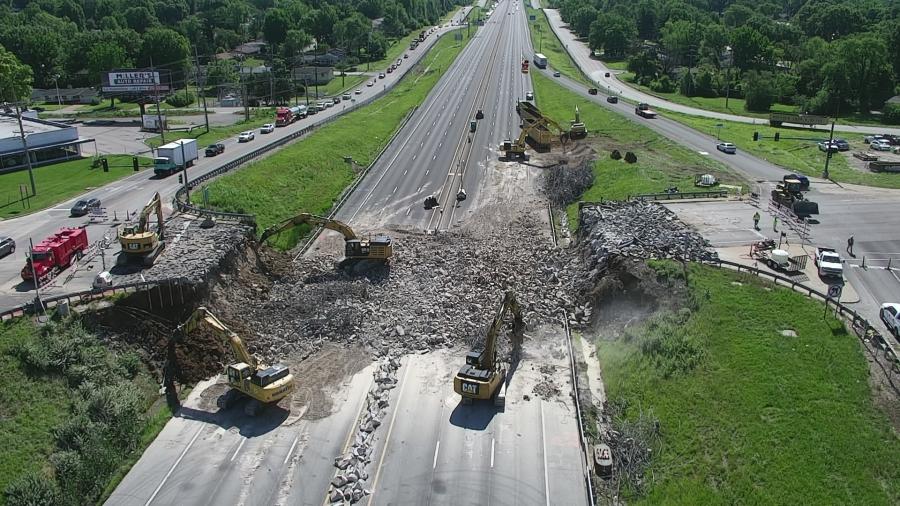 The I-270 project calls for replacing a dozen bridges and adding seven more through the corridor. (MoDOT photo)

In an effort to improve outdated highway design, deteriorating infrastructure and traffic congestion, the Missouri Department of Transportation (MoDOT) is overseeing the I-270 North Design Build Project. The $278 million undertaking, extending from James S. McDonnell Boulevard to Bellefontaine Road, will update and replace aging pavement and bridges, improve accessibility for bicyclists and pedestrians and enhance traffic operations and safety throughout the corridor. 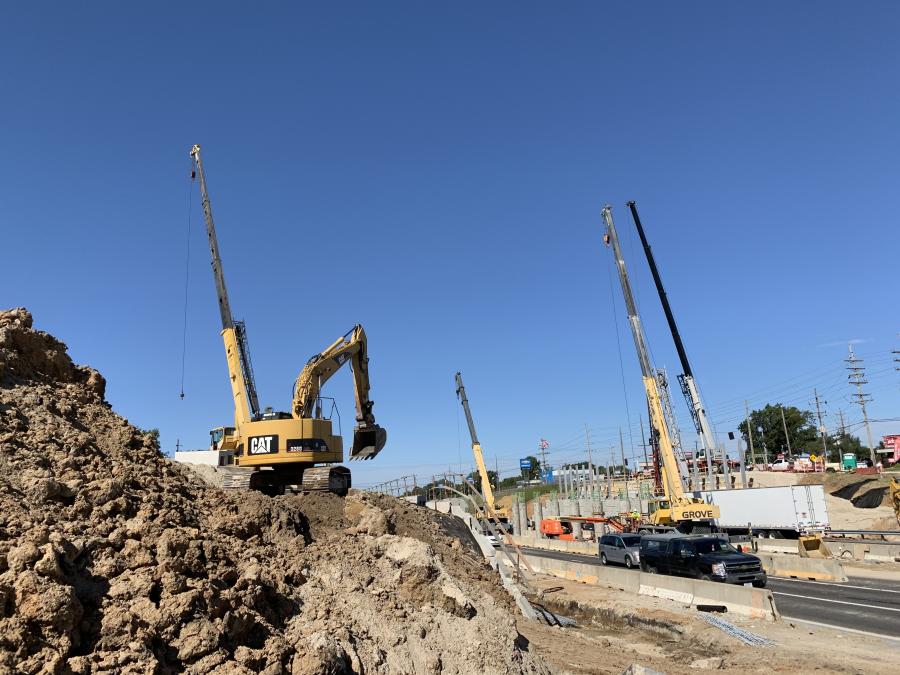 "I-270 North has a higher crash rate than comparable roads in our region," said Justin Wolf I-270 North project director. "Some crashes can be attributed to traffic congestion, roadway geometrics and vehicular travel speed differentials. This project will improve mobility on the corridor and help reduce crashes related to traffic congestion. It will make geometric improvements that address locations with high crash rates."

In addition, bridges and pavement are breaking down from many years of heavy freight volumes. The existing infrastructure is suffering and resulting in emergency maintenance repairs.

"This section of I-270 was originally constructed in the early 1960s, and is showing its age," said Wolf.

The project is replacing a dozen bridges and adding seven more through the corridor. I-270 North is a tight urban corridor, and most bridges being replaced must be demolished and rebuilt in their existing location.

"Fortunately, the transportation system has enough redundancy that travelers can endure bridge and road closures. We have had a one-hundred-day bridge closure, and are currently reconstructing a bridge with a 90-day closure duration. In addition to long-term closures, we have daily lane closures along the interstate."

When completed, the project should significantly ease traffic backups. 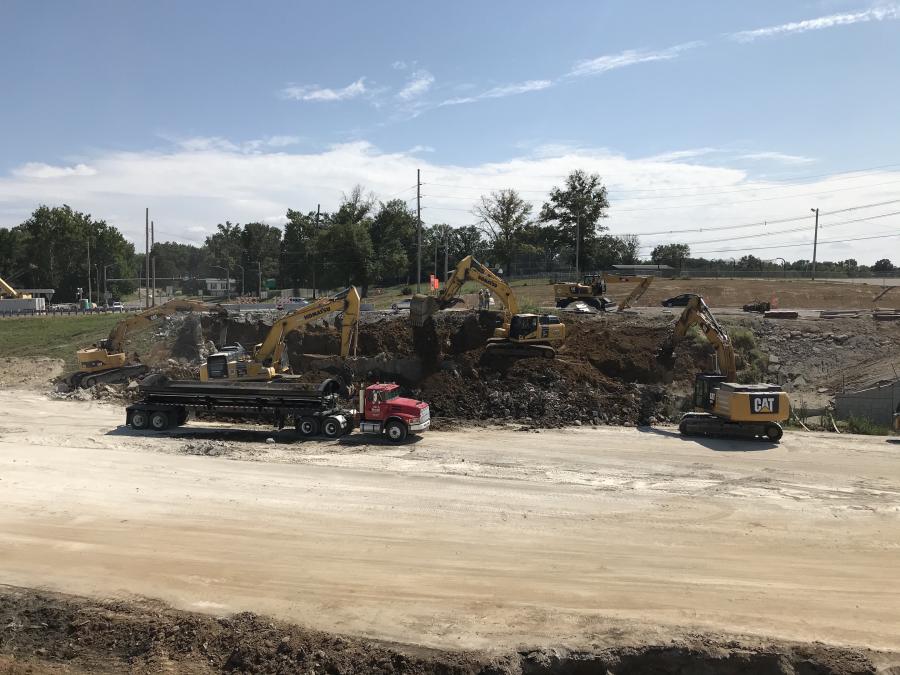 "An additional lane is being added to both westbound and eastbound I-270 between Route 67 and Route 367. This fourth lane on mainline I-270 will add capacity to the interstate. In the most urbanized section of the project, the number of entrance and exit ramps are being consolidated, and the outer roads are being converted from two-way to one-way to improve traffic safety and reduce congestion."

The new design features modern standards and significant safety improvements. It will add capacity to the entire system and new features are being added.

"It's extremely rewarding to see the construction taking place," said Wolf. "This corridor has been studied by MoDOT for nearly a decade and now we see earth being moved and bridges being built. It's a privilege to be part of such meaningful work."

Millstone Weber serves as the project's general contractor, one of the larger local contractors in the St. Louis area performing work for MoDOT. According to Millstone Weber Project Manager Brandy Broeckling, working in such a tight urban corridor with high traffic volumes has not been easy.

"The corridor is packed full of utilities. Working around them is challenging and if they must be relocated for construction, we must find a spot for them to go. There just isn't much room for anything in most locations."

The northbound portion of the Lindbergh interchange is currently under construction. The Washington Street/Elizabeth Avenue Bridge over I-270 also is being built and a new exit ramp and roundabout near Bellefontaine is well under way.

Bridge work includes demolition of the existing structures, excavating embankments at the bridge ends to allow construction of MSE walls, installation of piles at the abutments, installation of drilled shafts, columns and cap in the middle and then new girders and bridge deck. 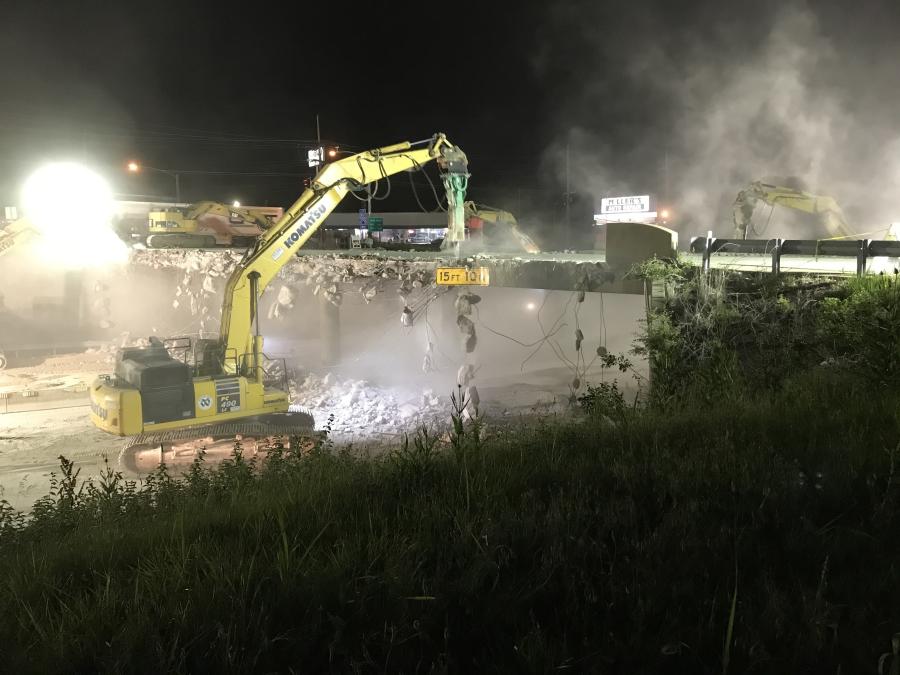 "There are twelve bridges being demolished and replaced and there are seven new bridges being added as part of interchange improvements and to improve connectivity," said Broeckling. "The majority of the bridges are being built using pre-stressed concrete girders. A couple of the bridges will have steel girders. They are either one- or two-span bridges. MSE walls are being constructed at the ends. The abutments are constructed on pile and the middle bent is constructed on drilled shafts and columns."

The bridges that are close to the end of their serviceable life are being demolished and replaced with new structures. Many of the interchanges will have all existing pavement removed and replaced with new concrete pavement. The new lane being added in each direction of I-270 will be constructed with new concrete pavement. Areas along the corridor that have asphalt pavement that can be rehabilitated will be milled and resurfaced."

The project also will add 10 mi. of multi-use path along the outer roads. In addition, crews are adding sidewalk and multi-use paths to most of the bridges crossing I-270.

Broeckling said weather could have a big impact on the ongoing project.

"Winters in the Midwest are always unpredictable. The schedule is very tight, and there are some construction activities that will need to take place over the winter months. Rainy springs could be detrimental to the schedule as well, with moving/placing earthwork and paving operations affected."

Excavators will be used to load earthwork and roadway/bridge demolition into tandem trucks to be hauled to areas on the project that need fill material. They also will be used to excavate for the 40,000 linear ft. of storm sewer pipe and 500 drainage structures to be installed. 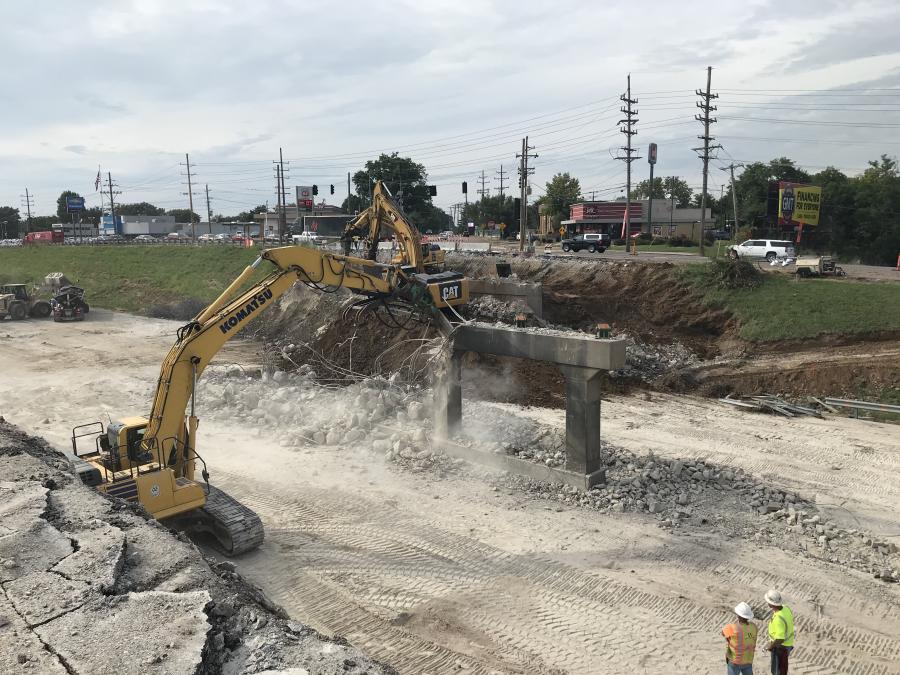 Dozers will be used to place the fill material, cut subgrade and place 600,000 sq. yds. of rock base for the new roadways. Cranes will be used to assist in the construction of the new bridges. They are needed for driving pile, setting girders and serving as support equipment to transport materials to the bridge deck. The main materials on the project are dirt, rock base, concrete, reinforcing steel and drainage pipe and structures.

The project site is an active six-lane interstate with outer roads that encompass 8 mi. and includes nine interchanges within the project limits.

"There was not much prep work on site that could be done before construction started," said Broeckling. "There are many stages of construction. Sections of roadway and bridges are closed at certain times, then demolished and the new constructed, opened to traffic and then we go to the next section of roadway or bridge."

Approximately 700,000 cu. yds. of earthwork will be moved on the project.

"There are two large interchanges on either end of the project that require fill. The other interchanges and overpasses that are being constructed in between have MSE walls at the bridge abutments. This will generate large amounts of excavation.

"Adding a lane in each direction on the interstate, reconstructing all of the outer roads and reconstructing five additional interchanges will generate the remaining fill material. Most of the material will be moved with excavators and tandem trucks and then placed with dozers." 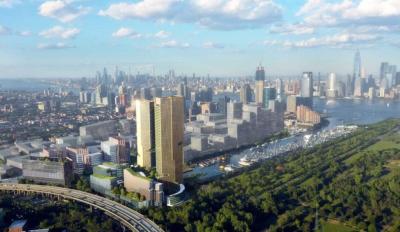