MSG Sphere at The Venetian 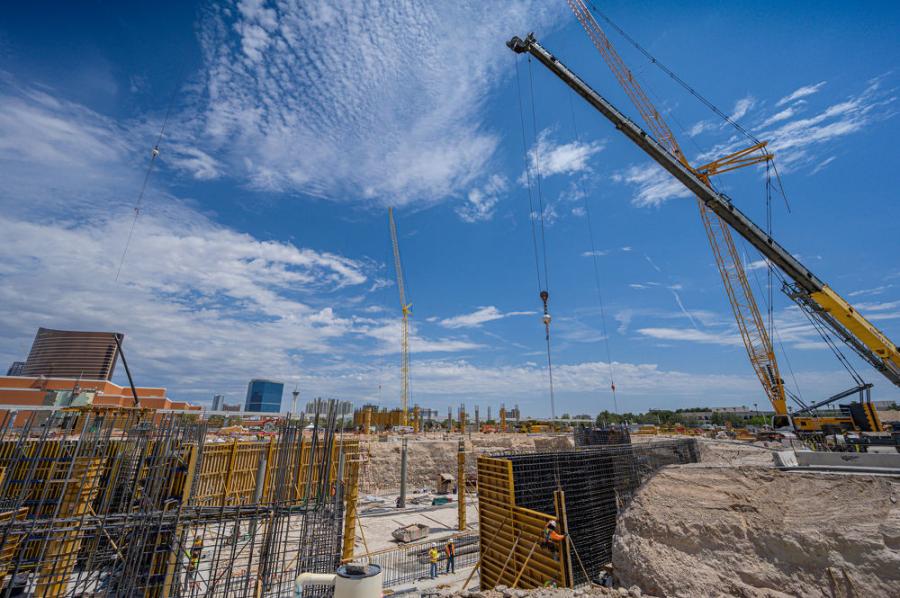 As much as 10,750 tons of steel will be used during construction, with rebar totaling 12 million lbs. (Madison Square Garden Company photo)

Currently under construction just outside Las Vegas, MSG Sphere at The Venetian will serve as a state-of-the-art entertainment venue when it makes its highly anticipated debut. Crews in Paradise, Nev., are making steady progress on the spectacular, multi-million dollar structure, which was designed using cutting-edge technologies to revolutionize entertainment. 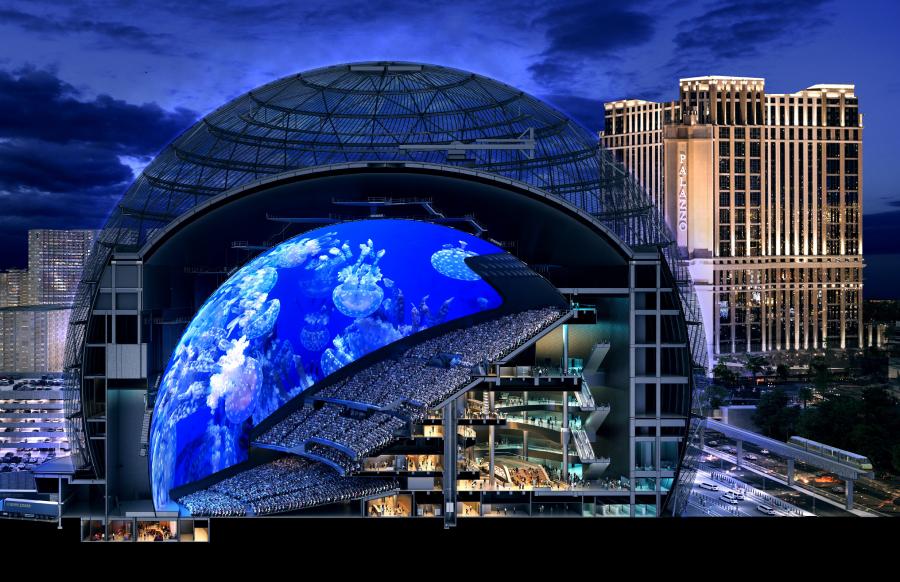 "MSG Sphere at The Venetian is not only an architectural marvel, but it also will fundamentally change the way artists, performers and storytellers interact with audiences," said Jayne McGivern, executive vice president, design and construction, The Madison Square Garden Company. "With a scalable capacity for 17,500 guests seated, MSG Sphere at the Venetian will be the first venue to deliver fully immersive experiences on a scale never before seen."

The cost to construct the MSG Sphere has been estimated at upwards of $1.2 billion. The project is being built on an 18-acre site located on Sands Avenue between Manhattan Street and Koval Lane. A nearly 1,000-ft.-long pedestrian bridge will connect the venue to Las Vegas Sands' Venetian and Palazzo complex, the biggest resort under one roof in North America.

MSG Sphere, led by Madison Square Garden and Las Vegas Sands, will be 366-ft. tall, 516-ft. wide and include approximately 875,000 sq. ft. of interior space. Technologies will include a fully programmable LED exterior, creating a digital showcase for artists, brands and partners. Guests will be surrounded by what's being called the largest and highest resolution LED screen on earth. The more than 3.8-acre display plane will wrap around the interior of the bowl. 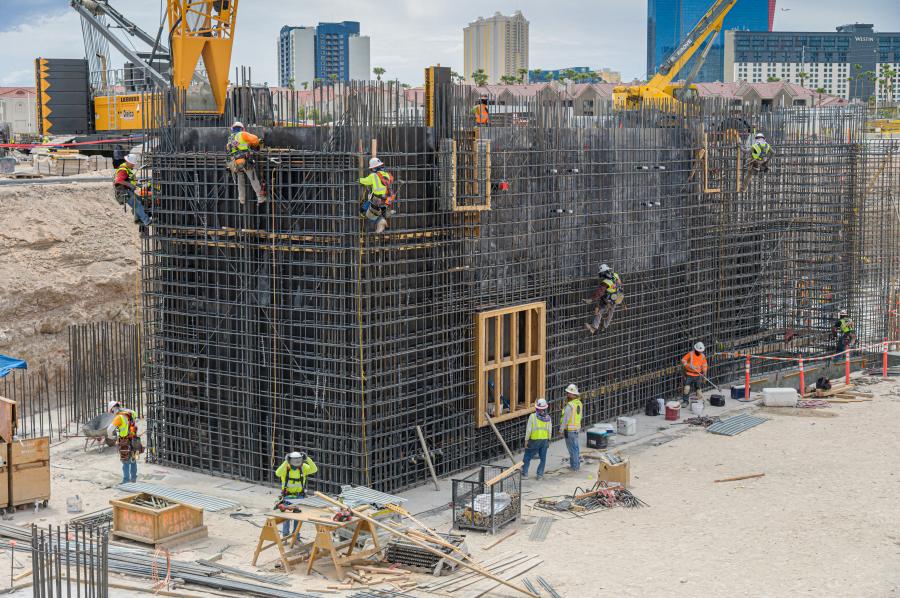 "We have made extensive progress on the 18-acre site," said McGivern. "To date, we have excavated nearly 110,000 square yards of dirt, resulting in an 80,000 square feet basement level, and have begun drilling deep foundations. In fact, the venue foundation is made up of more than 45,000 lineal feet of drilling. That's approximately 8.5 miles. We're excited to begin vertical construction with the start of staircase and elevator cores, and look forward to continued progress."

Bringing the project to life is no small undertaking. It will require roughly 75,000 cu. yds. of concrete. Crews have already installed in excess of 18,000 cu. yds. of the material. In addition, as much as 10,750 tons of steel will be used during construction, with rebar totaling 12 million lbs.

Building the mammoth structure will require technical expertise. An adaptive acoustics system will provide audio to each guest, no matter the size or type of event. A variety of technologies, including beamforming, will allow audio to be directed to specific locations in the bowl at a near constant volume from point of origin to destination.

In addition, an infrasound haptic system will help the audience become immersed in the experience. There also will be a new architecture for connectivity that will deliver 25 megabits per second for every patron, enabling a broader range of content and greater interaction among guests.

According to Cara Clarke, vice-president of communications, Las Vegas Metro Chamber of Commerce, the performance venue will be a significant addition to the area. 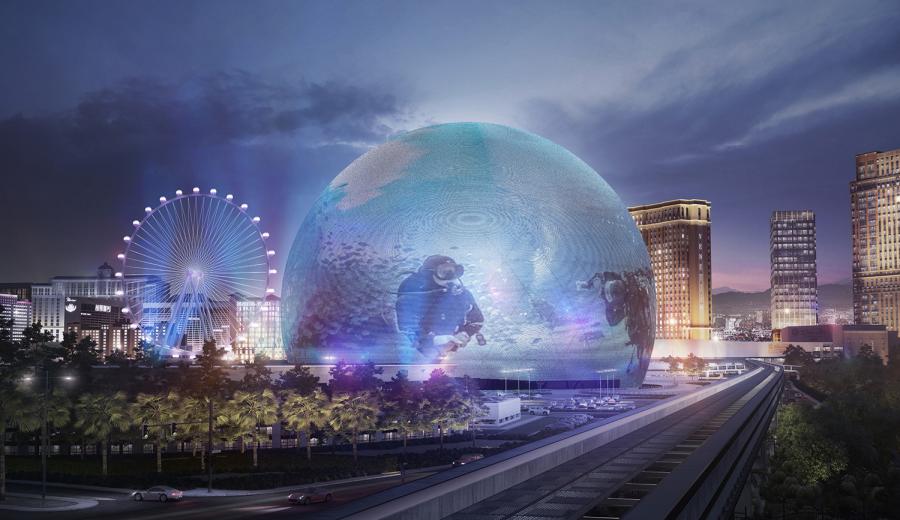 "There will be nothing else like it on the planet. The MSG Sphere will be an attraction in and of itself, with its interesting shape and screens on both the exterior and interior. The plans are for some of the programs to be designed expressly for the venue, so it will offer only-in- Las Vegas experiences."

It also will underscore the city's reputation as a one-of-a-kind tourist spot.

"MSG Sphere is creating another great reason for people to come to Las Vegas," said Clarke. "It's one of the great things about our city. Las Vegas is continuously reinventing itself, and always creating new reasons for people to visit. Innovation such as the MSG Sphere is what keeps Las Vegas fresh, and a world-class destination.

Las Vegas Global Economic Alliance President & CEO Jonas Peterson said the project will be another strong addition to a portfolio of world-renowned entertainment, and will underscore the city's reputation as a unique destination.

"The Sphere will transform the Las Vegas skyline, and further cement our brand as the entertainment capital of the world."

Peterson said the project will bring new opportunities to the area.

"The Sphere is more than just another venue. It's an entirely new way to communicate powerful ideas and share experiences. It represents the next generation of immersive experiences, and I believe it will be a game-changer for our tourism market. 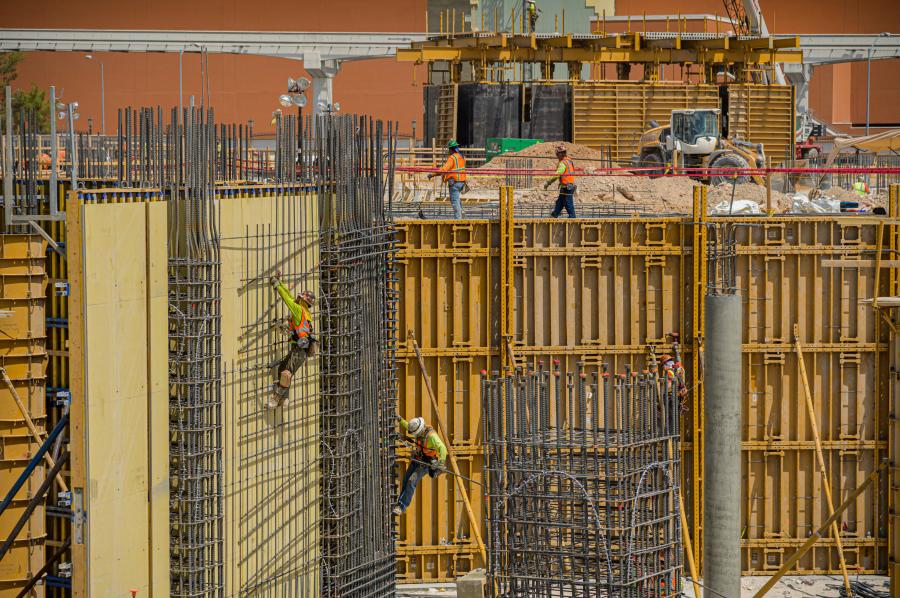 "Las Vegas is known for constantly evolving and building new, cutting-edge experiences. The Sphere will deliver a platform to support new experiences for decades to come."

The remarkable design of the structure itself is a selling point.

"We're inspired by the unique architecture and, as an economic development organization, we are pleased that it will bring thousands of jobs to our residents," said Peterson.

MSG Sphere, which reportedly will be served by one of two new planned monorail stations, was created to attract a mix of artists and offer a variety of concerts, family shows, corporate events, award shows, product launches and select sporting events. It's also expected to serve as a long-term investment in Las Vegas and Southern Nevada, bringing thousands of new jobs.

Analysis from Hobbs, Ong & Associates has projected the new venue will create an estimated 3,500 local jobs each year during construction, 4,400 jobs annually once the venue is open and an annual economic output of $730 million from venue operation and incremental visitation to Las Vegas.

These activities also will generate roughly $48 million in annual tax revenue for state and local programs and entities, including more than $7 million that will directly benefit the Clark County School District.

Internationally noted architectural firm Populous leads the design team for the project, with AECOM serving as the contractor. MSG Sphere at The Venetian is expected to open its doors in 2021. CEG