The new Tennessee State Museum will offer impressive views of the state capitol and the Nashville skyline when it opens in fall 2018. 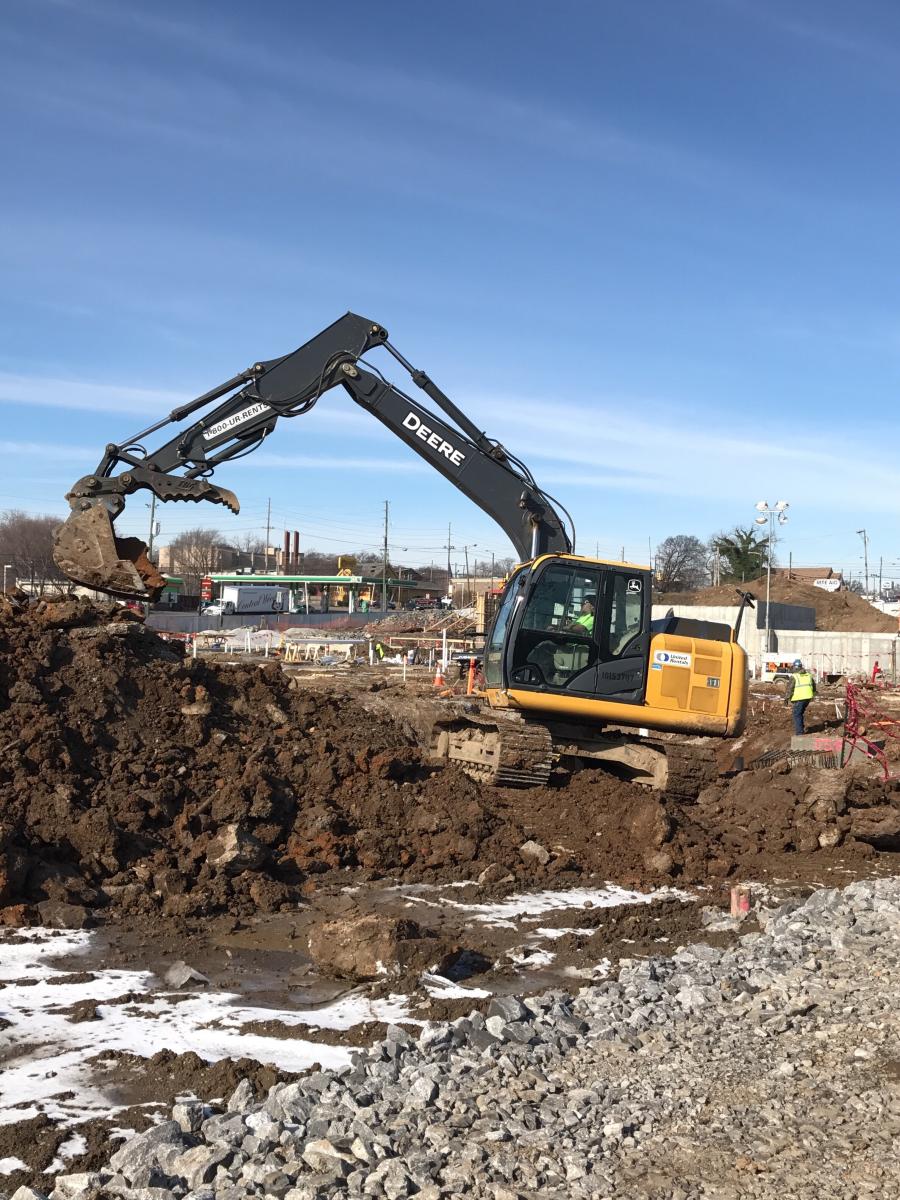 Described as a state-of-the-art educational asset, the new Tennessee State Museum will offer impressive views of the state capitol and the Nashville skyline when it opens in fall 2018. The $160 million, 130,000 sq. ft. (12,077 sq m) facility is currently under construction at the corner of Rosa Parks Boulevard and Jefferson Street, replacing an aging facility.

"The museum hosts an average of 115,000 visitors each year and is an important educational tool for students and teachers from across the state," said Steve Curtis, project executive, Compass Partners LLC. "The current space wasn't intended to be the museum's permanent home, and more than three decades later, it's outdated and antiquated. Over the years, several plans were considered for a new museum but didn't develop due to cost and budget constraints, so Governor Bill Haslam created a task force to recommend a plan that would work."

In 2015, Gov. Haslam and the Tennessee General Assembly approved a total of $120 million to build the new museum to highlight the state's history. An additional $40 million is being raised in private funds.

The new museum will showcase unique artifacts and art and historical documents in an interactive fashion. Featuring art, music, videos and touch screens, the two-story structure will offer a wide range of multi-media presentations, as well as the latest in technology.

Exhibits will feature mobile and portable traveling and digital displays. A 250-seat digital learning and outreach center will provide presentation space and connect to other museums, experts, colleges and schools from across the globe. Speakers and scholars will have the opportunity to lecture audiences both in person and in digital form. The museum also will offer an educational suite, dedicated to children, with assembly space, hands-on demonstration areas and a smart meeting space.

"The museum will continue to be a resource to educators and students across the state, and will also be a draw for Tennessee residents, as well as visitors to the state," said Curtis. "It will take a hybrid interpretive approach that balances thematic and chronological presentations of exhibits and visitor experiences. It will be designed to enhance the artifacts, works of art and historic documents that will be on display with audio, video and new technologies to bring those to life in a way that the museum is not able to do today.

"The centerpiece of the museum will be the Tennessee time tunnel that will take visitors through a brief trip of the state's history through an engaging mix of artifacts and technology. If a visitor had a tight schedule to see the museum, he/she could enter the time tunnel at various points and leave with a good feel for the highlights of Tennessee's past, present and future. There will be sections and exhibits that emanate from the time tunnel in which visitors can delve deeper into time periods and topics, such as Tennessee's role in the Civil War and the state's rich history in music from bluegrass to country and western, to blues and to rock and roll."

In 1937, the General Assembly created a state museum to house World War I mementos and other collections from the state, the Tennessee Historical Society and various other groups. This museum was located in the lower level of the War Memorial Building until it moved into the James K. Polk Center in 1981. The Tennessee State Museum currently occupies three floors, covering approximately 120,000 sq. ft. (11,148 sq m), with more than 60,000 sq. ft. (5,574 sq m) devoted to exhibits.

Curtis said the location for the new museum is an ideal one.

"It will be located at the northwest corner of the Bicentennial Capitol Mall, which is a state park located in the shadow of the capitol that gives visitors a taste of Tennessee's history and natural wonders. It serves as a lasting monument to Tennessee's Bicentennial celebration on June 1, 1996.

"The museum will better connect downtown to the nearby Germantown area and serve visitors to the Bicentennial Mall and adjacent farmer's market, as well as attract new visitors to the area. The location also will have convenient access to the interstates, which will help facilitate visitors from across the state, especially school buses."

The new building will complement Nashville's already booming tourism industry, but will also be an asset to the entire state because it tells Tennessee's story, and it can connect to other parts of the state through technology, specifically the digital media learning center that will be used for presentations, lectures, interactive classes, etc.

The project team quickly evaluated the characteristics of the site, such as soil conditions, the presence of rock, flood plains, etc., to determine an efficient plan to manage the site and provide the appropriate foundation system. The entire team was assembled earlier than normal due to the required schedule. These included the designer for the building, the building contractor, the museum exhibit designer and the museum fabricator, who fabricates and installs the exhibits.

Since the project is on a fast track and will be completed by late 2018, the team of architects, museum exhibit designers, building contractor and project managers was chosen very early in the process to assure the museum will be delivered on schedule and within budget.

Site work started in May 2016 and has continued on a planned scheduled.

"Retaining walls and other below grade concrete work is underway," said Curtis. "Underground utility work is being installed, and the first vertical structural steel will be starting in January."

Site grading for the building pad has already been completed, as have the deep building foundations. Connections to existing utilities have also been finished.

Key tasks yet to be carried out include structural steel erection, coordination of the building with future museum scope, such as embedded utilities and wall locations, as well as placing two levels of concrete floors. The top floor will be placed first, as it will be the location for the majority of the galleries.

Installation of the exterior envelope, in order to facilitate interior work, also will be a major undertaking. Once the envelope is established, the exterior skin, primarily limestone and bronze panels, will be installed. Preliminary museum work, including exhibit walls, will begin prior to the final completion of the building. Building HVAC, security and other control systems will be in place prior to final installation of the artifacts and other sensitive materials.

Curtis said that crews are forever mindful of the elements, which have not been an issue, so far.

"The dry summer and fall weather did not cause delays and were an advantage for the schedule. Now that we are very nearly out of the ground, weather will not impact the remaining work as much as it would if we were still excavating; however, rain and wind can have impact on structural steel erection," Curtis said.

The site was already owned by the state of Tennessee. Most of the site was an employee parking lot. Prior to being a parking lot, the site had several periods of usage, including rather large single family houses and general retail. Only a small portion of the site was affected by the area flood plain. No abnormal conditions were found during the exploration or construction.

Since the site was generally vacant, very little clearing was required. The majority of the demolition was the removal of two farmer's market sheds. The project is on schedule, and will be nine months into a total planned time of 29 months as of January 2017.

Most utilities, except permanent electrical power, have been connected to the property boundary. Erosion control and other site control matters have been ongoing since last May and will continue through most of this year.

Approximately 50,000 cu. yds. (38,227 cu m) of dirt/material will be moved on the project, which calls for various excavation equipment, hoe rams for rock excavation, drill rigs for blasting, concrete pump trucks, large dump trucks and micro-pile drilling equipment. A moving crane that will erect the structural steel frame also will be on site.

"The project team was assembled in the fall of 2015," said Curtis. "Since then, a lot of time has been devoted to assuring that the building program and architectural design will accommodate the soon to follow museum exhibits. Concurrently, the museum exhibits were being designed and planned to specifically fit into the building. This concurrent design required hours of coordination among all involved team members, in order to meet the required schedule."

Curtis said building an interactive museum differs from other construction projects in that there are several unique aspects to consider, including integrating the new building into the state's existing information and security systems, coordinating the development of the new facility with the operations of the current facility and making certain the museum presentation is as user-friendly as possible.

While the transfer won't take place for awhile, plans are already in place for packing and transferring the many priceless museum treasures.

"Museum conservators and staff will prepare artifacts and store them in the existing museum," said Curtis. "Design & Production, Inc. (D &P) is the contractor that will pick up the artifacts, deliver and install them in the new museum. D & P has a very successful history of teaming with the exhibit

In the short term, the current museum will be used to warehouse and display pieces in the museum's vast collection once the new building opens its doors. Because it shares same building as the Tennessee Performing Arts Center, there are other longer term options for the space that are currently being studied.

The museum team includes project manager Compass Partners LLC, construction manager and general contractor Turner Construction and exhibit designer Gallagher & Associates. EOA Architects is partnering with the architecture and engineering firm HGA regarding design efforts. EOA principal Sheila Dial-Barton, AIA, said that a well-crafted design incorporates input from the locale, the particular site, the function of the building, the scale of the building, the desires of the client, the needs of the intended users, the given budget and the years of experience of the members of the design team.

"Depth of meaning and story lines can be developed to interpret the design intent for people seeking the thought behind various decisions such as the number, height, width and spacing of the front columns and their relation to our state capitol's columns. Decorative elements used to add fine detail to railings, glass guardrails, terrazzo floor patterns can reinforce the strong ties this structure has to its Tennessee heritage using our state tree, flower, bird, stars, etc.," said Curtis.

Pedestrian and vehicular traffic will view the building from all four facades, which challenged the team to disguise items that might be considered back-of-house.

The state's topography and vegetation will be represented throughout the site. Tennessee's rolling hills, flat lands and meadows will all be showcased. Indigenous planting materials will also be selected. In addition, a water feature has been incorporated as a central entry element that welcomes visitors upon arrival.

The Grand Hall will incorporate a star inlay representing the Tennessee flag and its three stars, showcasing the Three Grand Divisions of Tennessee. The proposed porch and veranda, leading from the grand lawn, are seen as a part of Tennessee's vernacular. This porch references the capitol, antebellum homes, rural churches, historic courthouses and governmental structures seen throughout the area.

The design team also is proposing the use of Tennessee Quaker Gray marble on the interior and exterior of the building as an accent stone, as well as used in special areas within the interiors. Limestone is proposed as the dominant stone for the building and is used throughout the complex.

Dial-Barton said sustainability has played a role in the creative process.

As for what tourists and others should take away from the new building, Dial-Barton said, "We want all visitors to leave with a deep appreciation of the rich history of Tennessee. We hope they feel a personal connection to the building, along with the wonderful exhibits and stories housed within."—CEG