Tennessee Department of Agriculture is moving forward with construction of a new metrology lab in Nashville. 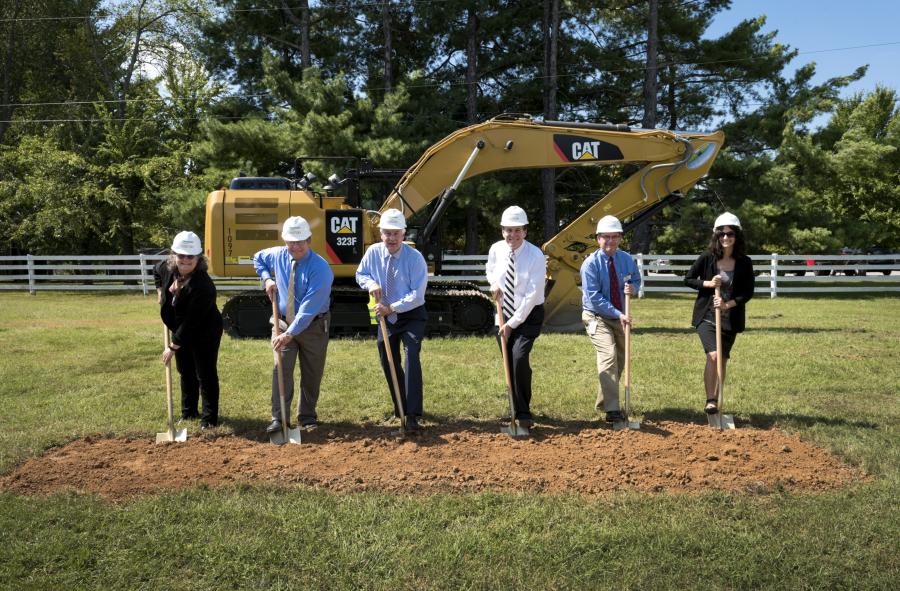 Tennessee Department of Agriculture photo A number of officials turned out for the gathering to witness the official kickoff for the long-awaited project.

After years of planning and preparation, the Tennessee Department of Agriculture is moving forward with construction of a new metrology lab in Nashville. The roughly 12,000 sq. ft. (1,114 sq m) structure, located at the Ellington Agricultural Center, will offer the most current equipment and testing capabilities to ensure fairness in the marketplace.

“The accuracy of calibration equipment used by businesses to install, maintain and repair scales, meters, pumps and other measuring devices is required to be within a very small tolerance of state and federal standards,” said Randy Jennings, director of program operations for the Consumer and Industry Services division of the Tennessee Department of Agriculture, which will manage the new lab.

“Scales used to weigh a load of grain at a feed store, the grain moisture meter used to determine the moisture content of the grain or the fuel pump used to fill the truck delivering the grain will all have a connection to the metrology laboratory.”

The standards used in the TWMML are directly traceable to the national standards maintained at the National Institute of Standards and Technology (NIST). TWMML is the sole source for legal metrology in the state. The laboratory provides a calibration service to all licensed servicepersons and industry.

The metrology lab is considered a key component in the nation's commerce system.

“We are confident this is an investment that will continue to support and spur Tennessee's economy forward,” said Jennings. “The Tennessee Department of Agriculture is tasked with ensuring accuracy of the scales and measures that are critical for equitable commerce in our state. Customers should always get what they pay for, and businesses should always get the full benefit of that payment. The new metrology lab will provide us with a greater opportunity to solidify that commitment to the citizens of Tennessee.

“It's estimated that sales of products or services impacted by metrology in the U.S. represent approximately 50 percent of the GDP. Grocery stores, gas stations, the transportation industry and chemical companies are all affected by the standards exacted in the metrology lab.”

Jennings also said conditions are right to start construction on the single-story structure.

“In order to maintain traceability to the NIST, gain unconditional accreditation and expand services expected by industry, there is no better time to build than now.

“The current laboratory has narrow capabilities with very simple mass and small volume determinations. Today, validating the moisture content of grain samples must be outsourced, and we offer no services for calibration of thermometers. The new lab will allow mass calibrations up to 1,000 pounds, and volume calibrations of up to 1,500 gallons.”

The facility will be built to meet the most stringent environmental conditions necessary for accurate metrological determinations. Temperature, humidity, static electricity, air currents and vibrations will be tightly controlled to allow for the most precise measurements and calibrations of mass, volume, temperature and moisture standards.

“The project began in 2013,” said Jennings. “Metrology labs are unique buildings, and there are many considerations before final plans are drawn for a project of this size. We visited metrology labs in Georgia, Oklahoma and Arizona, and looked at the best features of those facilities to launch our design process.”

A number of officials turned out for the gathering to witness the official kickoff for the long-awaited project.

“Among those joining us at the ceremonial shovels were Greg Adams, chief operating officer of the office of the governor and Deputy Commissioner John Hall of general services. Georgia Harris provided remarks for the NIST, and Gina Emmanuel of Centric Architecture introduced the design and engineering team. We also shared this special day with representatives from many of the industries benefiting from services that will be offered by the lab,” said Jennings.

Agriculture Commissioner Jai Templeton welcomed state and federal officials to tour the site. The construction of the $6 million lab is a realization of the long-time vision of many officials, including former Commissioner of Agriculture Julius Johnson.

According to Mat Deaton, project manager, Messer Construction Company, construction is going smoothly, although a great deal of work on the project remains.

“Our site grading began September 26, and we are currently underway with site storm water, under slab plumbing and footings.”

Deaton said that one of the key tasks to be performed will involve installing a 6,000 gal. (22,712 L) water tank underground to account for the discharge of water from a particular lab test that will be performed routinely.

“The tank will serve as an intermediate holding area as the water makes its way to the 1,500 gallon oil water separator, before entering into the public sanitary sewer. This will require excavations up to 18' deep to allow for the necessary fall from within the building, said Deaton.

“We will be performing 3D BIM (Building Information Model ) coordination that will provide our MEP trades with their field installation drawings free of any clashes between the different trades. We use this tool with the assistance from our internal virtual design and construction coordination department to improve productivity, and to avoid unnecessary rework in the field as the different systems are being installed.”

Main equipment being used on the job includes D6 dozers equipped with GPS for site clearing and stripping topsoil, along with a variety of excavators for underground plumbing and other site utilities. All-terrain fork lifts will be required for material handling and scissor lifts during interior fit out.

The lab design is primarily loadbearing CMU, with a relatively small structural steel package. Fiberglass rebar and other non-ferrous materials are required in certain labs, due to the lab equipment that will be used in those areas.

Deaton said vibration isolation is the biggest concern for crews.

“It is key due to the type of equipment and testing they will be performing in the labs. There are several isolated piers in the concrete package that cannot bear on rock. Any rock that is encountered in those areas will have to be removed, in order to maintain at least a two-foot clearance from any footing or pier.”

The laboratory site was an open grass field with no previous development, making it easier for workers to begin construction.

“We stripped the topsoil and have stockpiled it on the site. Roughly 300 cubic yards has been hauled out,” said Deaton. “Other work includes relocating some existing utilities, so they are not within the building footprint.

“We will utilize our internal building systems group for routine inspections and will be heavily involved during the commissioning process. Several tools, including Latista, a construction field management software used for tracking issues in the field, will help us resolve incomplete or unsatisfactory installations before they become an issue for predecessor work and/or final start up.

“Being involved in the design meetings early on to provide our professional insight and experience is always beneficial. Being in the room when key decisions are being made allows us to provide constructability advice and best practices from previous projects.”

“The project has to adhere to NIST standards for the installation of all measurement devices. This will allow the metrology team to support the NIST mission of promoting innovation and competitiveness by advancing measurement science and standards. The lab's activities will include fundamental and applied research on large volume testing, drive-through bay, precision lab, length lab, thermometry lab, grain moisture lab and small volume lab. It will also contribute to the development of certified reference materials and critically evaluated data.

“The second largest challenge within the project is a pilot BIM project for the state. This project will set the Tennessee BIM standards for all projects going forward that are new construction or major renovations. This will improve the efficiency of the facility maintenance team.”

Crews have recently been finishing site cleaning and initial grading and the building pad stone. The storm water detention structure has been completed, erosion control has been set up and top soil has been stripped in preparation for foundation and footing.

Key tasks yet to be carried out for the exterior construction involve the detention swale and storm structure, the site retaining wall, stone base for asphalt, the stone base building pad, along with interior piers and strip footings, prep and pour slab on grade, CMU on high roof, load bearing CMU at low roof, structural steel, joists and decking, below grade waterproofing and fluid applied air barrier. The existing fiber optic line on site needs to be relocated, as do water lines in the immediate area.

Rader also said that vibration and its effect on instrumentation will be a key issue.

Once the building is completed and additional metrologists are hired, it will take up to three years for the new facility to have complete accreditation.

The Tennessee Department of Agriculture supports producers and agribusinesses to build rural economies and increase farm income and industries. Agriculture is one of the top industries in Tennessee, contributing more than $74.8 billion a year to the state's economy and employing more than 349,000 citizens.

“We're so pleased to see construction moving forward, said Jennings. “It will be rewarding to see the brick and mortar component of this project progress each day. At the same time, we know that even after construction is finished it will take up to three years to have the metrology staff fully trained, the lab traceable to NIST, and accreditation from the International Organization of Standardization.” CEG