Like many small businesses, this Grimesland-based company had a humble start. 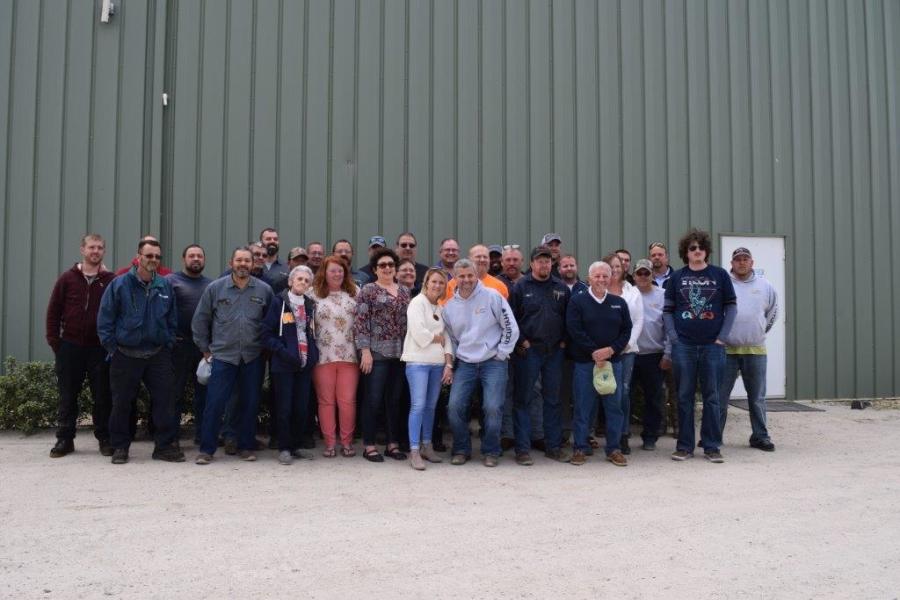 Like many small businesses, Rob's Hydraulics, founded by Rob Lynch in 1997, had a humble start.

“I started rebuilding cylinders with one other person,” Lynch said. “In fact, I would go out on the road, pick up a hydraulic cylinder and come back and rebuild it. That's how we got started.”

The company's original site — an old school gymnasium, which was rented — was humble, too. As Lynch aptly put it, “you have start somewhere, right?”

Before that, Lynch got his start in the hydraulics arena by working for his father-in-law's company that built hydraulic power units, which supplied poultry plants among other industries. Little did he know then that this apprenticeship would serve as the launching pad for the creation of his very own construction company.

Rob's Hydraulics really took off in 2002 when the company moved to its current shared headquarters facility in Grimesland, N.C., which included the addition of a service department.

“The hydraulic repair work led us into working on heavy equipment, such as excavators, loaders and dozers,” said Lynch. “We started building a strong service reputation, which grew when we got a couple of small service trucks. It was at that point that Hyundai got involved.”

Lynch said that one of the companies sharing the Grimesland facility was a construction equipment dealer that sold Hyundai products, but due to poor management, had gone out of business. The timing was just right for Rob's Hydraulics.

“When that company went under, they left people here with machines under warranty — no parts, no service, nothing at all,” said Lynch. “Hyundai initially hired us to do the service and warranty work for them, and about six months later, asked if we would start selling the equipment, too. I wasn't sure about it at first, but Hyundai was confident, and sure enough we started making sales shortly after that. In fact, the very first one we sold for Hyundai was a skid steer. It was purchased by a landscaper, and it's still running today. It was later resold, and it's being used in a seafood place nearby to load ice onto boats. It's pretty cool that it's still running.”

Rob's Hydraulics made the transition from a service-based company to incorporating sales smoothly.

“It happened pretty quickly,” said Lynch. “We brought in the knowledge, and we brought in the people. We hired people that were with the previous company, and they brought their knowledge with them. We also hired technicians with around 15 to 20 years' experience in field, but for the sales side of it, we just picked that up and took off.”

Approximately six months later, the business landed its first major contract with the North Carolina Department of Transport (NCDOT), which yielded its largest single sale — an order for 30 loaders. The company hasn't looked back since.

This year, the company marked its 20th anniversary, and has grown considerably since its first sale. Rob's Hydraulics currently employs 42 people and continues to be based at its Grimesland facility with a 16,000-sq.-ft. plot spread over two buildings. In addition, there is a complete service overhead crane system, 150 rental machines and nine service trucks with two more in the works.

The company also has a second site in Clayton, N.C., about 10 mi. outside Raleigh, which opened in January 2014. Lynch said key customers, manufacturers and contractors were contributing factors in the decision to set up there.

“We had the state contracts for NCDOT,” said Lynch. “We also started selling a lot of machines to contractors working in the Raleigh area, and we picked up a few more lines that forced us to expand in that direction. We worked with Hyundai to improve both of our market shares in the Wake County and Johnston County areas. We needed to have a building locally if we were going to fulfill all those commitments.”

The building is now host to 11 of Lynch's employees, including sales personnel and a branch and service manager, two service bays, three service trucks and three lowboy heavy-haul trailers.

The expansion of the business has, of course, both affected and been driven by its product lines.

The company sells and rents a range of machines from Hyundai, Yanmar and Takeuchi, Manitou, Precision Husky Corporation as well as Fecon attachments, available from either location. In 2016, the company also celebrated being the top Hyundai dealer in the country, selling more than 100 units. Three of the company's sales representatives made it on the top twenty list of sales representatives in the country.

Currently, the company is looking to expand again by relocating from the current Clayton facility to a new site in Smithfield, N.C., about six miles away in Johnston County.

The development of the company's operations in the Raleigh area over the past few years is driving this move.

“We still wanted to be within 70 or 80 miles of the Grimesland location with regard to transportation and support, but we wanted to stay out of the cross-state traffic a bit more to make things happen more quickly and easily,” Lynch said. “We've also sold a lot of machines in the Johnston County area so it makes sense from both of those angles.”

The new site will have seven service bays and cover around 10,000 sq. ft. of which 800 sq. ft. will serve as office space and 1,500 sq. ft. will be a parts warehouse. Groundbreaking took place on May 1, and the company plans to move in at the end of the year in December.

While part of growing a successful business is being in the right place at the right time, Lynch is keen to attribute the company's success to the “family feel” that pervades the business on a day-to-day basis.

“I think a major key is to surround yourself with good people, and good things will happen,” said Lynch. “I have to give credit to the employees here. Everyone we have here is like family, and everyone contributes. The sales guys can't do it without the parts and service people. The parts people rely on the guys that wash and service the machines before they go back out to rent them.

“We built this company on service and service sells. Service keeps them coming back. I think that's what a lot of people miss out on.”

As the company continues to celebrate its 20th anniversary, Lynch envisions the company having a few more locations in the next five years, including a location in Virginia. Plans are currently under way to expand into that area this summer.

“We're already selling equipment and renting to areas that are 120 to 150 miles away, which we can't service fully at the moment. So we'll set up there like we did here. I don't think it'll be a school gymnasium again, though.”—CEG