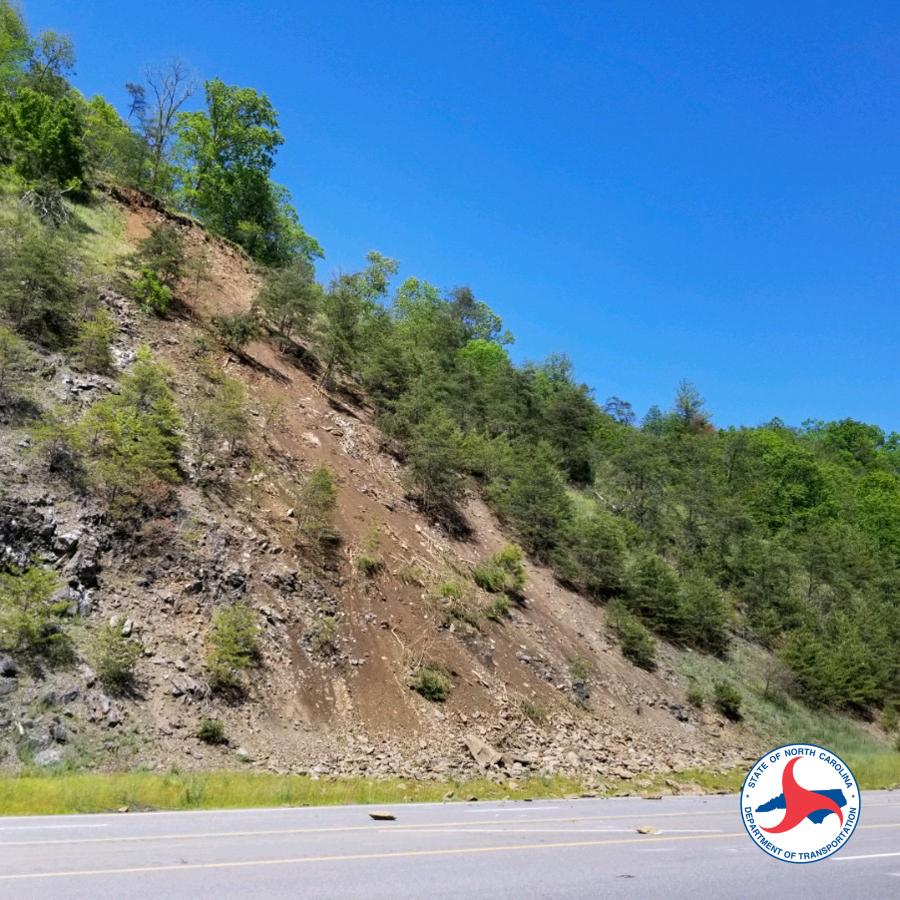 A series of rockslides in the scenic mountains of western North Carolina, triggered by weeks of rain, has brought engineers and crews to the area to clear roadways and seek solutions to the problem.

Two such events happened over the Memorial Day holiday weekend – both on the same day.

The more severe rock fall on May 23 occurred along U.S. Highway 25/70 near the Madison County town of Marshall. The affected roadway is approximately 20 miles north of Asheville.

The heavy rains that have inundated the mountains caused rocks and topsoil to tumble down a hill beside the northbound lanes of U.S. 25/70, approximately one-half mile south of U.S. 25 Business. The slide area is about 200 feet tall and 75 feet wide.

Geotechnical engineers from the North Carolina Department of Transportation (NCDOT) began an extensive examination of the damaged roadway and hillside over the long weekend. They quickly determined that that portion of U.S. 25/70 NCDOT immediately be closed in both directions of the highway.

Following that, the NCDOT established a detour utilizing nearby Interstate 26 and N.C. 213 to divert traffic around Marshall and through Mars Hill. Northbound drivers travel on I-26 West to Exit 11 before turning left on N.C. 213 and going nine miles to U.S. 25/70. Southbound drivers will turn left onto N.C. 213 on the east side of Marshall and make the 9-mile trip to I-26 East.

The alternate route will remain in place until the impaired lanes can be safely reopened.

In the meantime, highway crews have moved in with excavators and haul trucks to clear debris from the damaged four-lane highway.

"Our geotechnical experts will continue examining the active slide and help us develop a plan of action," said Tim Anderson, NCDOT's Division 13 maintenance engineer. "We realize the detour will be an inconvenience to many folks in Madison County, but first and foremost, it is important that the area is safe."

A much smaller rock fall also happened in the mountains two days before Memorial Day, although one that could have become much more serious. NCDOT crews in Yancey County, to the east of Marshall, established a lane closure on N.C. 197 around a single large boulder that fell into the roadway near the intersection of U.S. 19E. The site was just outside the town of Burnsville.