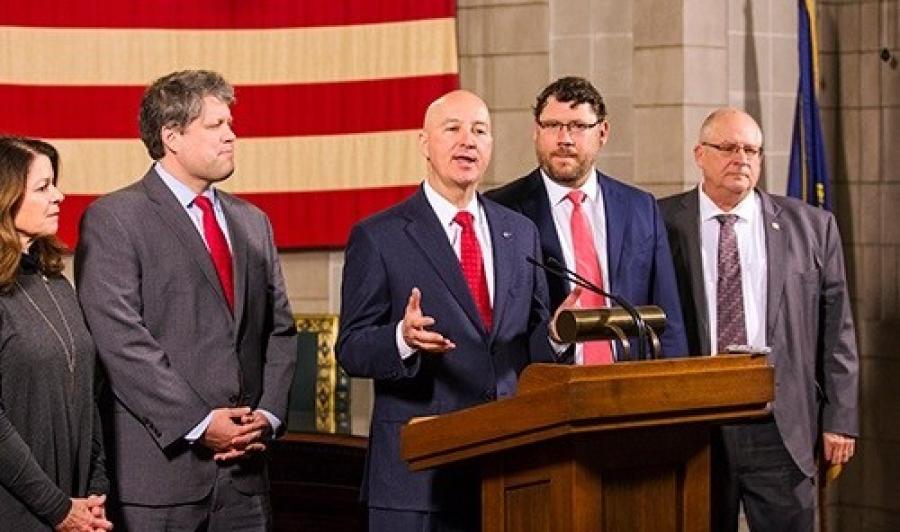 Gov. Pete Ricketts announced an expedited construction schedule that will allow the Lincoln South Beltway to be open to traffic by the end of 2022 (Nebraska Governor’s Office photo)

Nebraska Gov. Pete Ricketts, along with state Sens. Curt Friesen, Suzanne Geist and Mike Hilgers; Lincoln Mayor Chris Beutler; and Nebraska Department of Transportation Director Kyle Schneweis, announced Feb. 11 an expedited construction schedule that will allow the Lincoln South Beltway to be open to traffic by the end of 2022.

The Lincoln South Beltway will improve regional connectivity by creating an 11-mi., east-to-west, four-lane freeway south of Lincoln, linking Highway 77 and Nebraska Highway 2. It is designed to reduce conflicts between local and thru traffic, including heavy truck traffic.

"Today, we are excited to announce that the long-awaited Lincoln South Beltway project will be constructed ahead of schedule," said Ricketts. "This is another example of using innovation to make the state's operations more efficient, so we can grow Nebraska and keep Lincoln moving."

"This project has been a priority for Lincoln and Lancaster County for years," said Hilgers. "Today's announcement is a big step forward to making the South Beltway a reality. I'm happy to be part of the solution to bring it to Nebraskans by the end of 2022."

"This project provides the necessary capacity to the area to allow regional travelers an alternative route around Lincoln, reducing traffic through the city," said Schneweis. "The Lincoln South Beltway has been a project that has been well designed, discussed, and desired for many years. We are happy to be able to finally bring it to Nebraskans."

Previously, construction was expected to take up to eight years to complete. With this new approach, the NDOT will begin construction in 2020 and traffic will be under way on the Lincoln South Beltway by the end of 2022.

A state highway bypass around Lincoln could get finished ahead years ahead of schedule due to a new construction timeline.