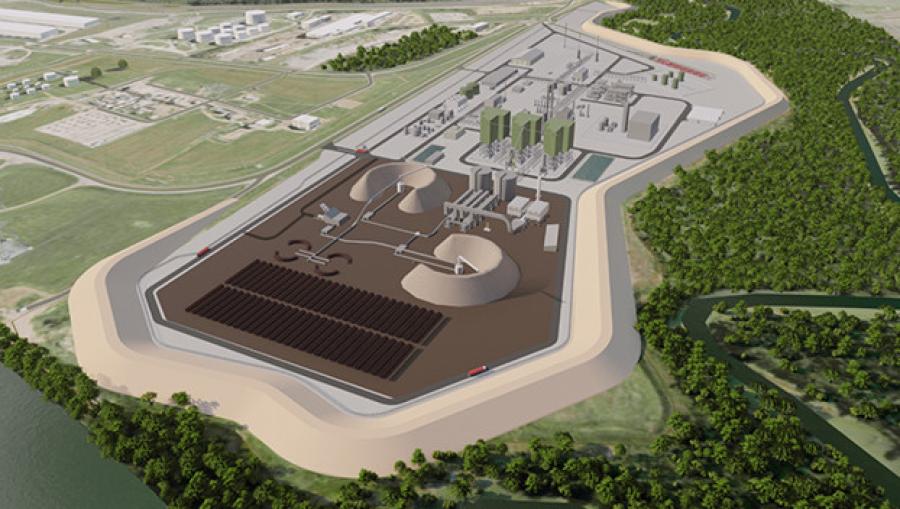 A concept drawing for the new Bayou Fuels refinery. Construction is slated to start in 2023.

Mississippi leaders hope that a $1.5 billion bio-refinery plant will begin construction as early as 2023, bringing hundreds of jobs to the state.

Officials in Natchez said Velocys, a UK-based sustainable fuels technology company, could begin building what would be one of only two facilities in the United States that would specialize in the production of environmentally friendly fuel – especially aviation fuel – made from wood waste.

Natchez Mayor Dan Gibson called the future Bayou Fuels project in his city a "historic" project in a social media post after meeting with Gov. Tate Reeves about the project in August.

"The company has been perfecting this ‘technology of the future' for 20 years, and is finally getting ready to launch," he posted. "After a final phase of engineering, ground-breaking could occur as early as 2023. This will be historic, and it will mean hundreds of jobs for Natchez [and] Adams County."

According to the Natchez Democrat, on Sept. 8 Natchez Inc. Executive Director Chandler Russ told the Adams County Board of Supervisors that a meeting with Reeves, Gibson and representatives of Velocys "went very well." Its main purpose was to "collect multiple years of tax-free bond" money for the new bio-refinery plant, he said.

"There is a huge push for green fuels, especially in the jet fuel market," Russ said during his project update to the Supervisors.

While Velocys has not yet begun construction, Russ told the county board that the company is already investing in plans for the new facility.

Jeff McDaniel, Velocys' vice president of new projects and one of its founding members, said his company has spent more than $20 million to date in the development phase of the Delta Fuels project. The Natchez news source reported that that investment included years of product demonstrations, which resulted in Japan Airlines completing a successful flight in June from Tokyo to Sapporo powered by fuel made from wood.

"To our knowledge, it was the first time a commercial airline has ever flown with fuel-based in wood," said McDaniel, according to the Democrat. "We took woodchip from Mississippi up to the demonstration site in North Carolina and a couple of years later we completed that second demonstration with some other technology partners in Japan."

The Velocys executive explained that the final detailed engineering work would begin in early 2022 and, if all goes well, construction will begin in the first half of 2023 and take approximately two-and-a-half years to complete.

When operational, the Bayou Fuels plant in Natchez is expected to convert 3,000 tons of woody biomass per day to produce 33 million gallons of renewable transportation fuel annually, including 20 million gallons of sustainable aviation fuel and eight million gallons of gasoline blend stock. The locally sourced wood will be harvested from the pine plantations in the counties surrounding Natchez, the British manufacturer said on its website.

Russ said Velocys compensated Adams County $1 million for use of the Belwood Industrial Park, a sum that included $500,000 for the prior two years and another $500,000 for the next two years of development, the Democrat reported.

"This is a huge opportunity for us as the project continues," Russ commented. "The benefit to the county is more than $1 billion of capital outlay to the site."

He added that the new industry also could employ 80 to 100 people directly as well as 300 to 400 people indirectly with outside and support jobs such as commercial truck drivers.

According to Velocys' website, upon successful execution of an Engineering, Procurement and Construction contract, Texas-based Koch Project Solutions will build and commission the first-of-its-kind facility, which includes the use of renewable power with carbon capture and storage of the plant's by-product carbon dioxide.

The conversion process from gasification of wood chips to FT synthesis generates a large amount of biogenic carbon dioxide as a by-product. Velocys assured, however, that this carbon dioxide will be clean, of high concentration, and dry. It, too, can be used for commercial purposes, replacing fossil-based carbon dioxide.