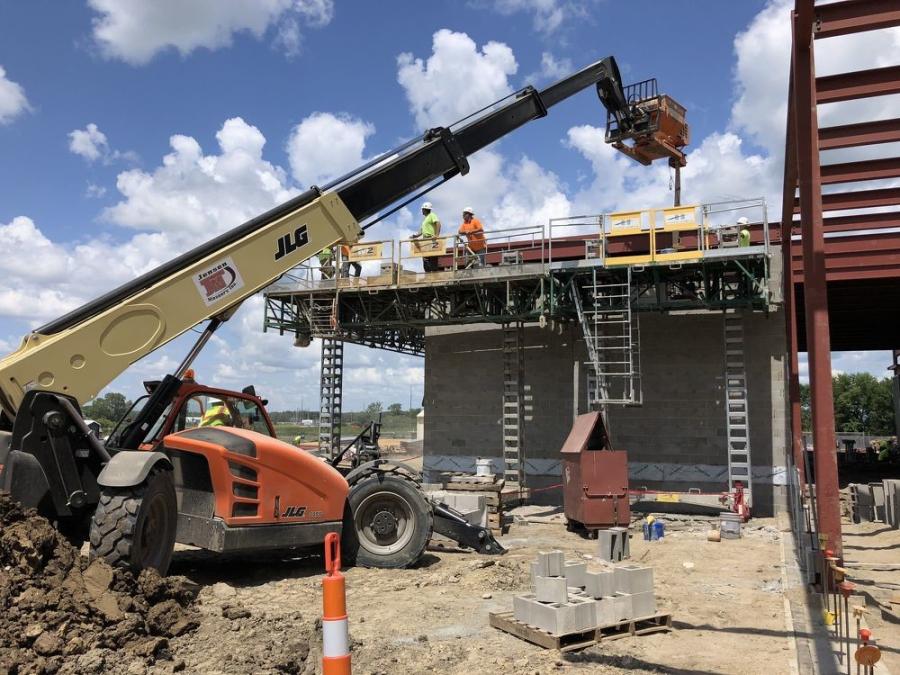 The ADRDL serves as the State of South Dakota’s veterinary diagnostic lab, the fundamental mission of which is to provide research and diagnostic services to serve not only the state’s hefty livestock industry, but its animal owners and the public health in general. (ADRDL photo)

The first of two important new veterinary science building projects at South Dakota State University is nearing the end of its construction, in time for opening prior to this fall's semester. That structure's finish, followed immediately by a renovation of an adjacent vet lab, is designed to elevate the school's already outstanding reputation for advancing the study of animal disease and prevention. 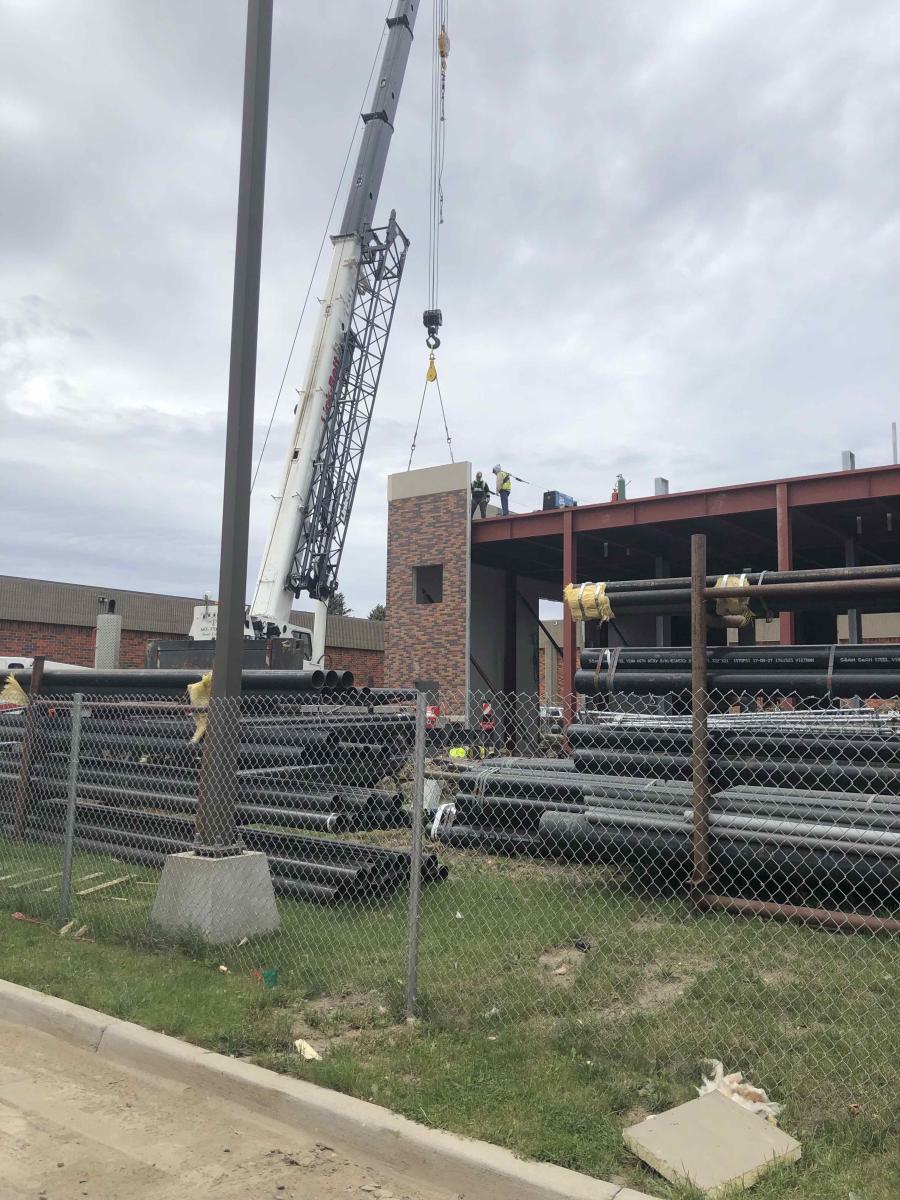 The overall structure of the first project, an addition to SDSU's Animal Disease Research and Diagnostic Laboratory (ADRDL), has been completed, but efforts will continue through the summer on the interior finishes, as well as some extra site work. The 81,000-sq. ft. ADRDL building will complement the current ADRDL space, which is scheduled to undergo an upgrade beginning in September with a targeted May 2020 completion.

The total cost of both vet science building projects is $61.2 million.

SDSU is a picturesque, public-research institute made up of more than 12,500 students in Brookings, a town in the far east-central part of the state. The school sits in the middle of the Great Plains.

ADRDL in Service to the State

The ADRDL serves as the State of South Dakota's veterinary diagnostic lab, the fundamental mission of which is to provide research and diagnostic services to serve not only the state's hefty livestock industry, but its animal owners and the public health in general. SDSU's new and improved vet labs promise to include state-of-the-art technologies to obtain high-quality diagnostic, analytical and research data. 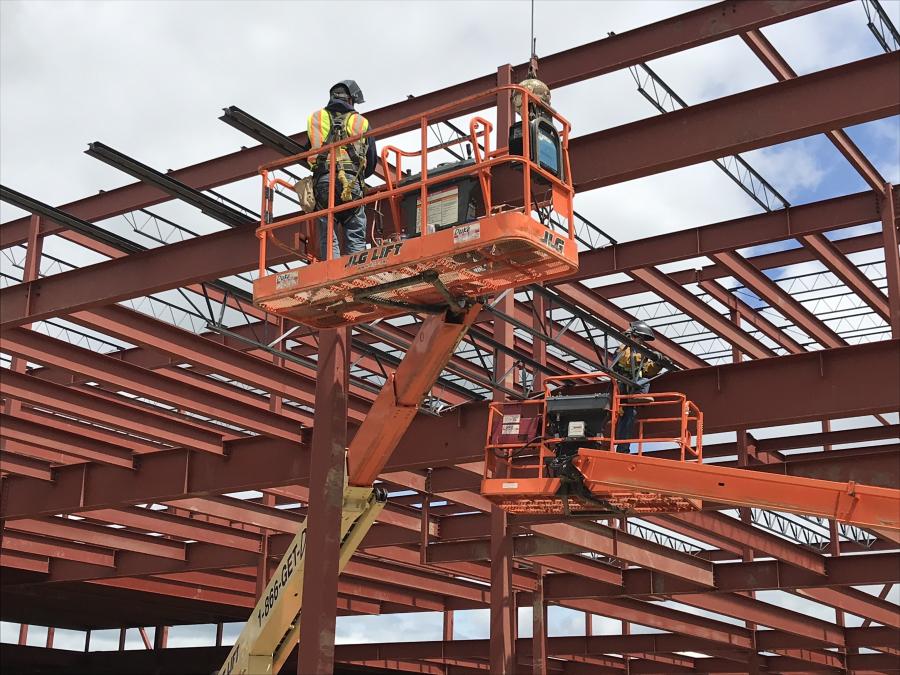 The new lab annex is located just north of the older ADRDL facility and, when complete, will allow the university to maintain full, daily lab operations as the upgrade to the current building is going on. The renovation and remodel of the older facility will give it a more efficient research space and bring the building to more modern standards. Both structures will be connected on their first floors when finished.

Matt Glenn is the senior project manager for the ADRDL's prime contractor, McCownGordon Contractors, based in Kansas City, Mo. He said the state's Board of Regents authorized the project in late 2014. By the next fall, a design team was chosen and McCownGordon was selected as the construction manager-at-risk (CMAR) in spring 2016. By March 2017, the entire project was approved by the South Dakota legislature and a year after that, excavation began.

"There are roughly three phases to this project, and they all overlap a little bit," Glenn said. "We have the addition to the existing building, an addition to the existing chiller plant and the renovation to the current 55,000-sq.-ft. lab. The overall timeline for this project is 26 months from when we started in March 2018 with the new building and chiller plant, right through to the rehab and finish of the original ADRDL a year from now." 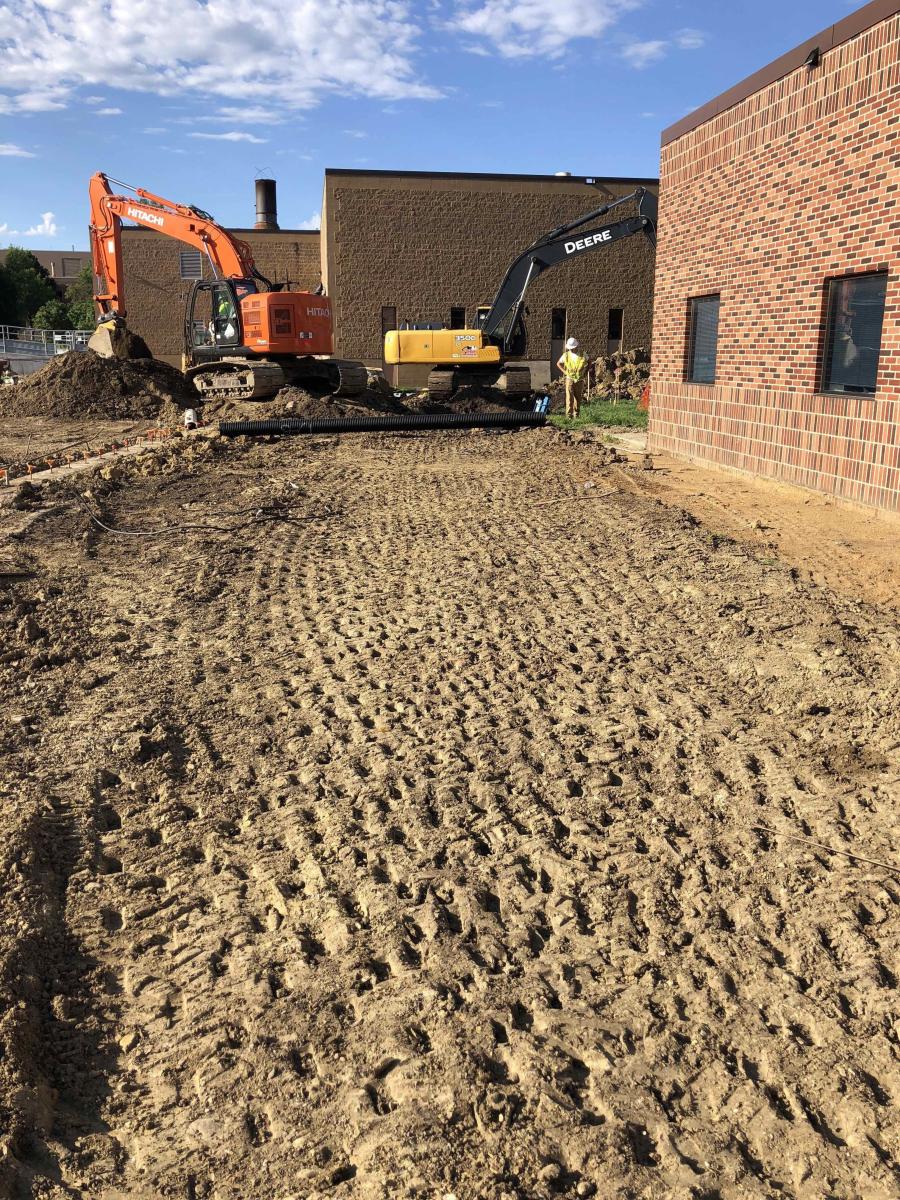 Glenn's colleague, Chris Hoffman, another project manager for the contractor, said that second part of the plan, to renovate the older one-story ADRDL building, is slated to begin just after the larger addition becomes operational.

He reported the chiller plant addition is just over 4,000 sq. ft., and will include three new chillers and a trio of new cooling towers.

Sophisticated HVAC systems are required as scientists and technicians using the ADRDL facilities sometimes work within Biohazard Safety Level (BSL) laboratories. The Centers for Disease Control and Protection (CDC) sets BSL lab levels as a way of exhibiting specific controls for the containment of microbes and biological agents. These safeguards are designed to protect lab personnel, as well as the surrounding environment and community. The levels are ranked from one to four are selected based on the agents or organisms that are being researched in any given lab setting.

Within the ADRDL buildings, BSL-2 and BSL-3 labs will be utilized, with the higher-level space typically including work on microbes that are either indigenous or exotic and can cause serious or potentially lethal disease through inhalation.

Like the original building, the larger ADRDL addition will utilize a HVAC system located in mechanical equipment rooms where ductwork is minimized. The biohazard labs themselves will have HVAC equipment that will exclusively serve those spaces. 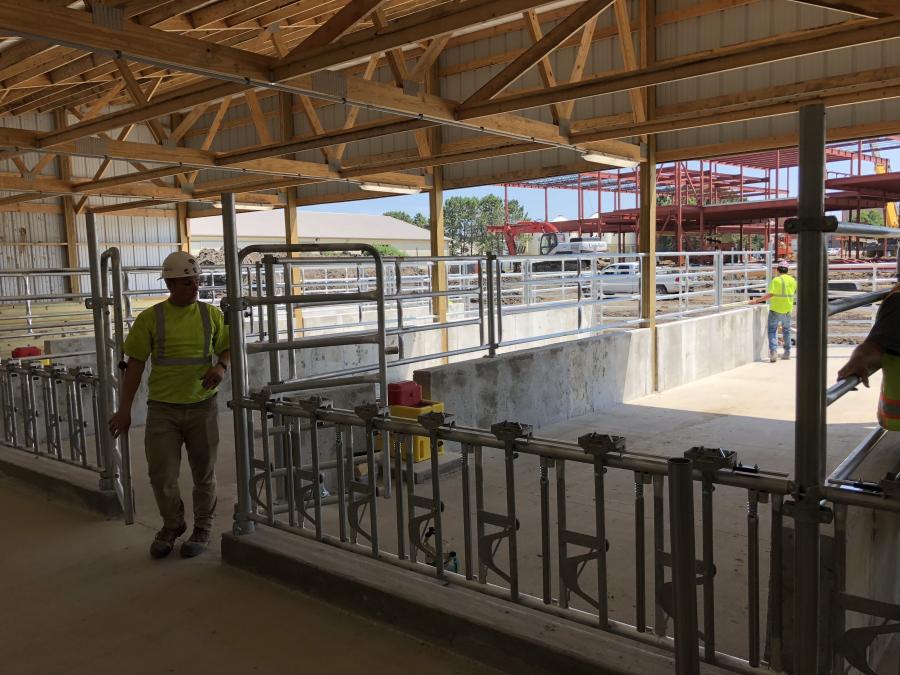 The ADRDL addition was built as a structural steel frame on a concrete foundation. Concrete masonry was used to house the building's necropsy suite (a BSL-2 lab to examine an animal's body to determine cause of death), while the exterior of the building is brick masonry.

Additionally, Hoffman explained the McCownGordon's crews used a high-thermal rigid insulation board on the exterior face in lieu of standard gypsum sheathing. Spray foam insulation was applied within the exterior wall cavities.

"As far as interior spaces, there are definitely some higher-end finishes like epoxy wall and floor coverings as well as high-end laboratory casework and equipment in the addition," he said. "The BSL-3 area certainly has some special considerations as far as the building material. The walls go to deck and every penetration into the room must be sealed tight. This includes injecting sealants in all conduits to prevent unwanted air from leaking out or into the space. The HVAC system includes welded, stainless exhaust and bag-in/bag out filters in each air-handling unit."

In planning the construction timeline of the ADRDL project, McCownGordon thought it had accounted for everything to be expected from two often-unforgiving Upper Midwest winters.

"But, the two biggest challenges we faced were the late winter storms and cold weather," Hoffman said. "The ground had not thawed like we expected it to by March /April 2018. Then this last year, we just got so much snow that it made the site more difficult to dry out to complete additional site work. 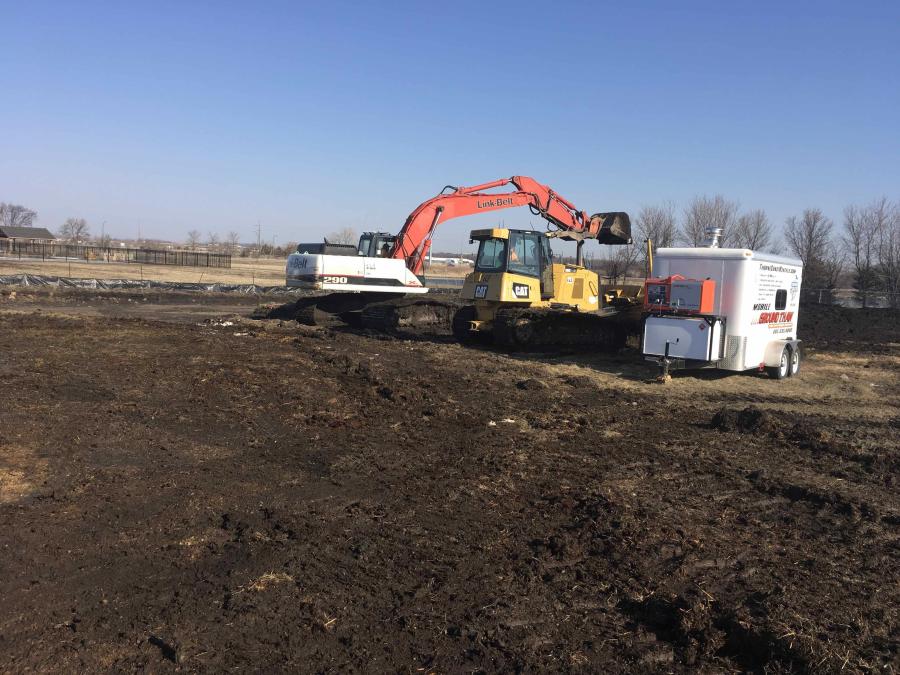 "I have to hand it to our trade partners, though, for putting in the overtime and coming up with creative solutions to keep us moving because we really would not be nearly as far along without their help."

Those associates included Bobcat of Brookings, close by the university campus; and Duke Rentals, the national dealership with a location in nearby Brandon, S.D. The latter company provided an array of equipment pieces for McCownGordon on the ADRDL addition – among them a big Link-Belt 290 excavator, and a Cat D6K dozer, a Cat 950 wheel loader and Cat 259 track skid steers.

"Scott Bruns at Duke Rentals has been fantastic to work with and I highly recommend them," Hoffman said.

The new ADRDL construction had seen between two to five crews work at the site, with a total of 20 or more skilled workers, depending on the trade, he added. In April, though, as work hummed along inside and out, Hoffman said "we have roughly 100 craftsmen at any given time, but we will start to crew down here over the next few months as we near the finish."

Later in 2019, yet another new SDSU science building will begin construction aimed at crop and animal production, as well as environmental conservation. The $46 million Raven Precision Agricultural Center will be a 129,000-sq.-ft. facility. Faculty and students using that future center will be able to benefit from the latest technologies and will have access to a fabrication space to build equipment and bioreactor facilities to better research microbiology and fermentation.

SDSU hopes to have that new building completed in spring 2021, with classes starting there the next fall