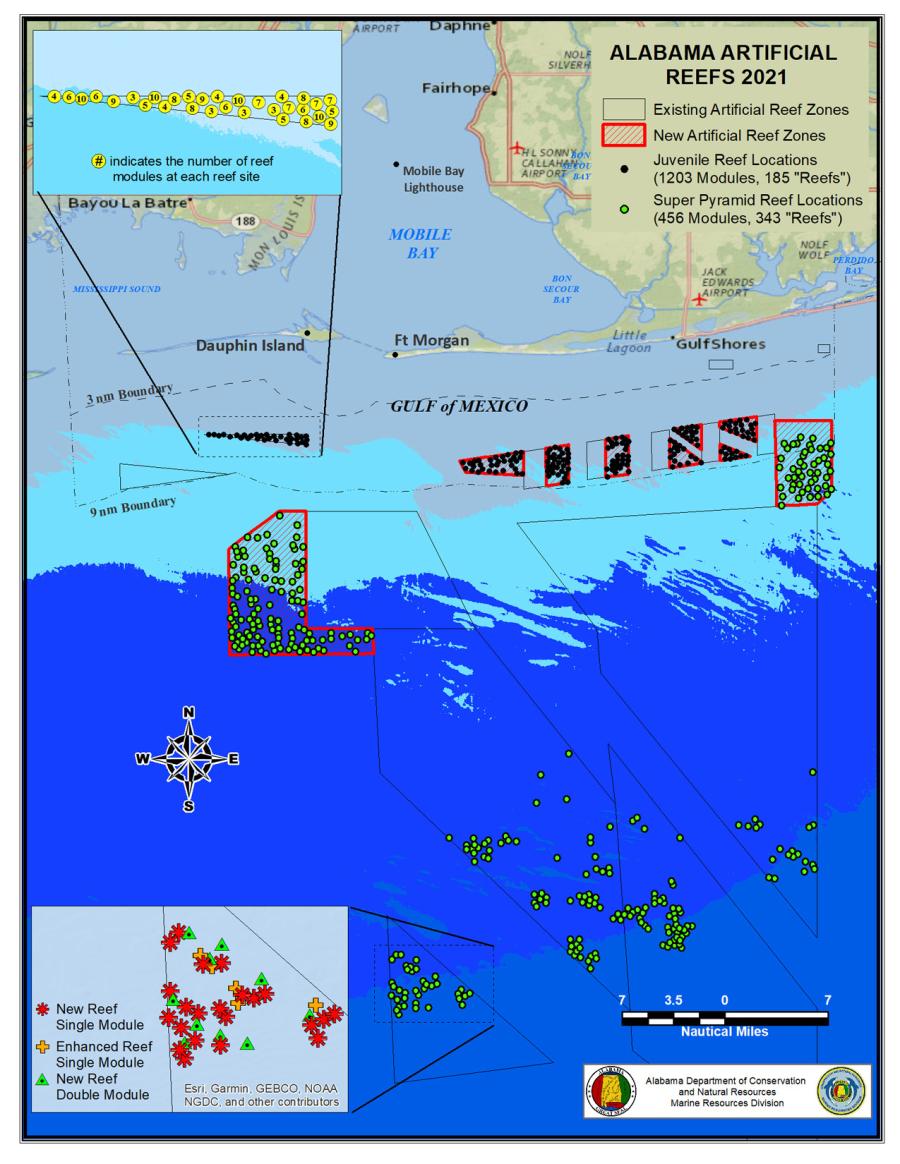 Already the largest in the nation, if not the world, Alabama's artificial reef zones recently got even larger with the addition of 110 sq. mi. of Gulf of Mexico bottom.

As part of an overall $8.135 million expansion of the Alabama Artificial Reef Program, the Alabama Department of Conservation and Natural Resources (ADCNR) and its Marine Resources Division (MRD) recently received federal authorization for two additional permit areas from the U.S. Army Corps of Engineers.

"We have expanded the 6- to 9-mi. reef zone," Newton said. "Originally, we had about 30 square miles in that reef zone. We're expanding by 23 square miles near Gulf Shores and Fort Morgan and another 24-square-mile area offshore of Orange Beach that is between eight and 15 miles offshore."

The largest of the new zones is 13 to 25 mi. south of Dauphin Island and adds 63 sq. mi. for the 110-sq.-mi. total of new water bottom for constructing artificial reefs.

Getting the zones approved was a lengthy process to ensure historical resources and artifacts were not impacted by the new reefs. The cost associated with the permitting process was $742,000, according to MRD.

"We had to do bottom surveys that were required by the National Historical Preservation Act to ensure that cultural resources are not compromised," Newton said. "These cultural resources could be shipwrecks, Civil War artifacts and areas that early inhabitants used as campsites or mounds thousands of years ago.

"During eras of sea level transgressions, water bottoms near the Alabama coast would have been exposed. The sub-bottom profiler [scanning equipment] data identifies natural levees of bayous, rivers and creek banks where early inhabitants would have made campsites and used for hunting grounds thousands of years ago.

In the end, Newton said, only a few areas of the sea floor were identified as places to avoid.

A total of 1,203 juvenile reef fish shelters are being deployed at numerous locations in the 6- to 9-mi. reef zones, with three to 10 shelters per site as part of a $2.4 million contract, Newton said. Each one is made up of a quartet of 4.5-ft.-diameter concrete discs placed on a pedestal and embedded in a concrete slab.

"Our monitoring and research have shown that these type modules are extremely effective for providing habitat for juvenile reef fish, particularly gray triggerfish," he explained. "Young red snapper, gray snapper and lane snapper will also use these structures. Since we have been deploying a significant amount of adult-size reef structures, we felt that adding these juvenile structures will help facilitate the recruitment of juveniles to the larger reefs farther offshore."

At the larger offshore reefs, ADCNR Commissioner Chris Blankenship executed a $4.9 million contract to deploy 456 pyramid-shaped modules, each 25 ft. tall and made of concrete and limestone.

GPS coordinates for the new reef sites will be published later this year after all the reefs have been put in place.

"Generally, a wide variety of reef fish will be utilizing the larger pyramids," Newton said. "Farther offshore, these structures will provide quality habitat for not only red snapper but also amberjack, vermillion snapper and groupers too.

"The juvenile reefs will help provide a connective link between the fish utilizing the inshore habitat and the fish moving to the offshore habitat," he added.

Blankenship said he constantly brags about Alabama's Artificial Reef Program and the new project is just going to make it better.

"With the expansion of the reef zones and the new reefs we are building, we will ensure continued great fishing off the coast of Alabama for decades to come," he noted. "I appreciate the partnership with the National Fish and Wildlife Foundation to assist in funding the multimillion-dollar construction of these reefs."

Blankenship said he cannot wait to take advantage of the improved fishing opportunities himself.

"The fishing this year has been great when the weather has allowed for boats to get out and enjoy it. Red snapper fishing is always great, but the last two years have really seen the resurgence of gray triggerfish. Since the triggerfish season reopened [on Aug. 1], I have seen some great ‘trash can' size triggerfish photos on Facebook harvested in the Alabama Artificial Reef Zones.

"I hope to get down to Dauphin Island and catch some [triggerfish]," he continued. "With greater amberjack, red snapper and triggerfish seasons all open right now, it is a great time to wet a hook on some of the productive reefs off the coast of Alabama."

With the additional 110 sq. mi., the Alabama Artificial Reef Program now encompasses more than 1,136 sq. mi. of water bottom in the Gulf of Mexico.