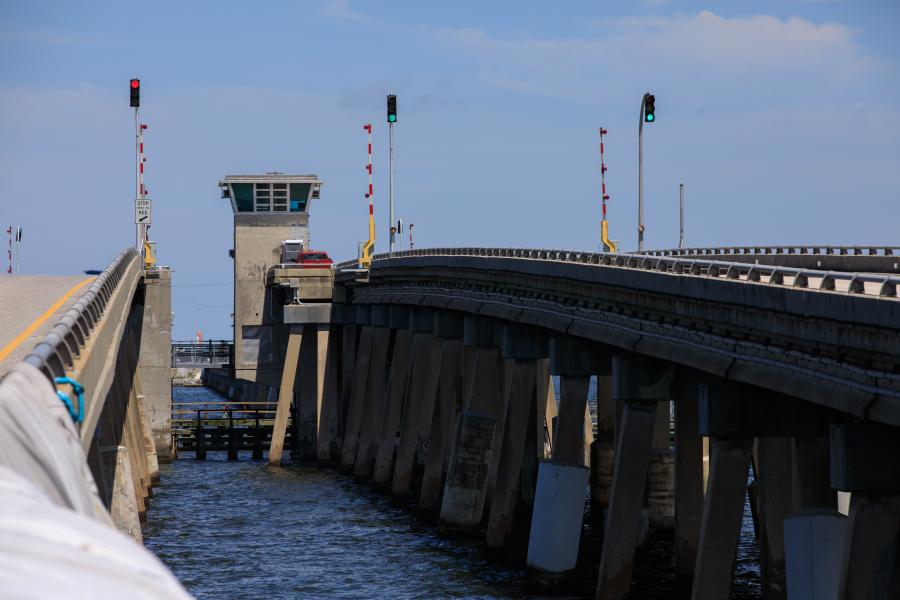 NASA’s Engineering Directorate at Kennedy Space Center is managing multiple critical projects on the Indian River Bridge. This includes running new utility lines and safeguarding the existing wires and piping prior to the beginning of construction of the new Brevard County bridge. (NASA/Ben Smegelsky photo)

Included in that is the installation of new utility lines and safeguarding the existing wires and piping prior to the beginning of new construction to replace the structure, also known as the NASA Causeway Bridge.

Originally built in the middle of America's Space Race with the Soviet Union in 1964, the old bridge serves as a key access and evacuation route for the Florida spaceport and Cape Canaveral Space Force Station.

NASA KSC continues to diversify as a multi-user spaceport, with commercial crew and Artemis missions among the many activities taking place on Florida's Space Coast. As operations increase, so does traffic and the need for a new bridge across the waterway separating the mainland and Merritt Island.

Workers recently drilled 75 ft. below the Indian River from one bank to the other, boring nearly a mile of piping through the riverbed and causeway.

"We are on track to complete all required utilities work ahead of Florida Department of Transportation (FDOT) construction beginning in late 2021," said Justin Ausanka, the Engineering Directorate's senior project manager of KSC's Experimental Facilities Development.

"This relocation work will last throughout the summer and into the fall as our team continues to identify and address the critical repairs necessary to keep the bridge operating at its current weight and speed ratings until demolition, likely in 2023-2024."

Maintaining full traffic flow and utility services is crucial to support the large number of launches and processing activities at Kennedy and Cape Canaveral Space Force Station, and to enable operations by commercial partners such as Blue Origin, Boeing, SpaceX and United Launch Alliance.

"Engineering also is leveraging the extensive expertise of our Spaceport Integration and Services directorate to provide supervision, inspection, and engineering services during the construction project," Ausanka said. "Along with Center Planning and Development, all three directorates play a critical role in ensuring that projects are not only designed correctly, but also perform to expectations and meet our end user/customers' needs."

In addition, over the past decade, NASA and key outside stakeholders studied the condition of the bridge to inform the planning effort. From 2018 through early 2021, NASA partnered with FDOT, through the Federal Highway Administration, which led to the completion of the new design for twin high-span causeways with no drawbridges, to replace the existing structure.

The construction was made possible by a $90 million Infrastructure for Rebuilding America (INFRA) grant, which was awarded following an extensive effort by NASA, the State of Florida — through FDOT and Space Florida — and industry partners, as well as other local, state, and federal government agencies.

"NASA agreed to support the federal INFRA grant between the U.S. Department of Transportation and the State of Florida on Jan. 27," said Jael Lamothe, partnership development manager in Kennedy's Center Planning and Development organization. "The relocation of the utilities is one of the commitments NASA made as part of this grant partnership."

NASA and the state of Florida also are contributing monies as part of the agreement. In all, NASA will fund at least $26 million for the bridge and associated tasks between now and 2024, including ongoing operations, maintenance, and repairs of the existing drawbridge and causeway approaches.

The Indian River Bridge is a public access right of way located on federal property. Its four lanes connect Titusville to the KSC, via FL Highway 405, and support the spaceport, the neighboring Space Force Station, and several NASA partners located outside the spaceport gates. The 57-year-old bridge also serves the population of north Merritt Island as well as tourists and others traveling through the area.

"There will be some inherent minor inconveniences — lane shifts, ‘zipper-merges,' flagmen and lots of orange cones — that may offer occasional unexpected changes during your commute," he said. "But we are doing our best to avoid any surprises during rush hours in the morning and afternoon."

Ultimately, these inconveniences will give way to a new structure equipped to better serve all visitors to the Space Coast, according to NASA KSC.

"The new Indian River Bridge will provide a vital conduit from KSC to and from the surrounding community," said Kennedy Engineering Deputy Director Scott Colloredo. "People, space-bound payloads and commodities that supply the center depend on a reliable means to cross the Indian River, and the new bridge will do that."