New Construction to Bring a Transformation to USM Portland Campus 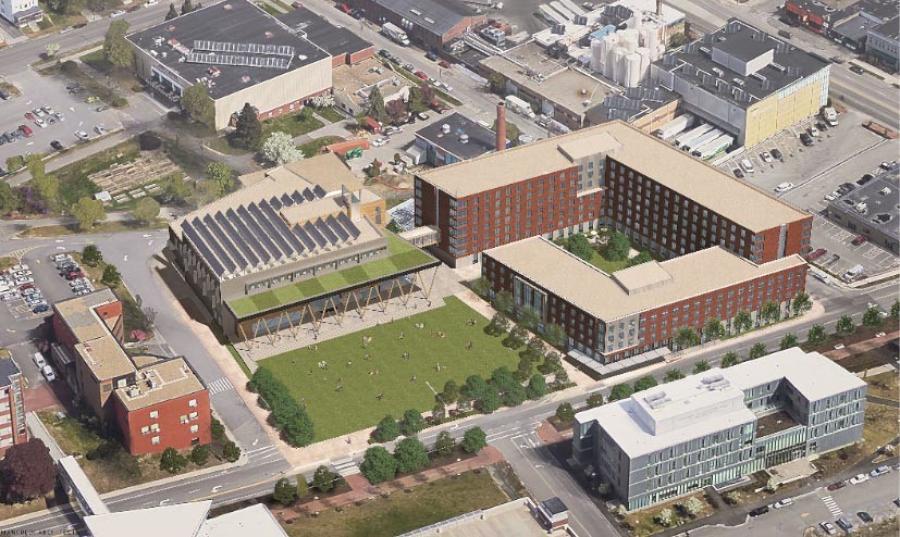 There are major changes coming to the University of Southern Maine's Portland campus, where extensive construction is under way on a $100 million dormitory and student center project.

The benefits of this effort are many, such as affordable housing for students at the new 580-bed residence hall, a career and student center with sustainable features such as solar panels and cross-laminated timber, a grassy quad providing a natural gathering place, and new arts and graduate facilities.

Construction on the Portland Commons Residence Hall — the first university residence hall on USM's Portland campus — started in the spring and is expected to be nearly finished by June 2023. Soon, work will commence on the three-story, 42,000-sq.-ft. Career & Student Success Center and a one-acre campus quad.

"When completed, the three projects will transform USM's Portland campus and the city's skyline," said USM President Glenn Cummings at a virtual groundbreaking in May.

By the end of August, the city of Portland expects to near completion on the new Deering's Corner Roundabout at the intersection of Deering and Brighton avenues and Falmouth Street — a project that planners hope will improve traffic operations and safety, according to CentralMaine.com, a local online network of area newspapers. A portion of the roundabout work may continue through November.

Designers for the new Portland Commons dormitory have engineered it to use 50 percent less energy than a normal building built to code. According to the USM, when finished the dorm will be on track to become the second-largest university "passive house" structure in the United States, meaning that the dorm will possess a strict green building standard that prioritizes energy reductions and high indoor air quality.

Funding for the $72.8 million residence hall will come from UMaine System revenue bonds, and revenue generated by the residence hall will fund annual debt service payments. The building is expected to alleviate overcrowding in the dorms at the university's Gorham campus as well as provide affordable housing for students in Portland's tight housing market, CentralMaine.com reported.

The $26.6 million Career & Student Success Center will be funded in part with a $19 million state bond and will be constructed in the space formerly occupied by the Woodbury Campus Center at 25 Bedford St. The new facility will provide space for diversity, equity and inclusion offices.

Both the dorm and student center are part of a master plan approved in 2019 that seeks to create a new "campus heart" around the quad and calls for other building investments, including a new Graduate Center for Professional Studies and Center for the Arts.

USM is currently in the planning stages for the new arts center and the graduate center, the latter of which will draw on funding from a $240 million gift made to the UMaine System last fall, according to the CentralMaine.com news source.

"I think the work we're doing will be transformative to the campus," said Alec Porteous, chief operating officer and chief business officer of USM. "Having residential housing on the campus for the first time in its history will really change it considerably and make it welcoming to our students, who really struggle to find affordable housing. Putting 580 beds on campus is really a game changer for us."

A house at 118 Bedford St. is slated for demolition beginning in July because it needs significant structural repairs and lacks energy efficiency, said Dan Hartill, a USM spokesperson, in an email to CentralMaine.com. Once the building has been removed, the property will be open green space for the time being, he said.

It is one of several houses the university occupies on Bedford Street that also includes administrative offices, the student newspaper, and a student and community radio station, WMPG. In addition, the university also owns five homes on Chamberlain Avenue, and a sixth nearby on Deering Avenue, all of which are being leased through the nonprofit affordable housing provider Avesta Housing.

"The university is highly sensitive to living arrangements and regularly meets with [local] residents," Hartill noted. He said the university is currently reviewing its options with the Bedford Street corridor and currently has no plans to expand parking into the space where 118 Bedford now exists.

Mark LaPointe, president of the Woodfords-Oakdale Neighborhood Association, said residents previously had concerns about a proposal to put additional parking near Falmouth Street, though the university has changed those plans and now expects to enter the permitting process for expanding the existing parking garage into the Wishcamper Center parking lot instead.

LaPointe also expressed concerns about traffic in the broader area following construction of the dorm and student center.

USM is expecting most of the traffic impact from the student center and dorm to stay focused on Bedford Street and has been working with a traffic consultant through the planning, permitting and construction process.

As part of its traffic mitigation efforts, USM has set goals to reduce the number of university-generated trips during the local peak traffic hour by 3 to 6 percent by 2025, and to reduce demand for parking by 10 to 14 percent during the peak hour of demand on campus. The goals are part of a transportation demand management plan, the goals of which include reducing overall trips, demand for parking and greenhouse gas emissions.

On Chamberlain Avenue, residents said that despite their concerns about the demolition and future of the university-owned houses, they do see benefits to the dorm and student center project.

John Stevens, whose backyard borders 118 Bedford St., told CentralMaine.com, "(I do have) the usual concerns that would go along with that: traffic, late night noise. [But] we were in college in dorms, and I remember how that went. I think there's that but at the same time they are making the school nicer and what they're doing is they're improving it, so that side of it is great."