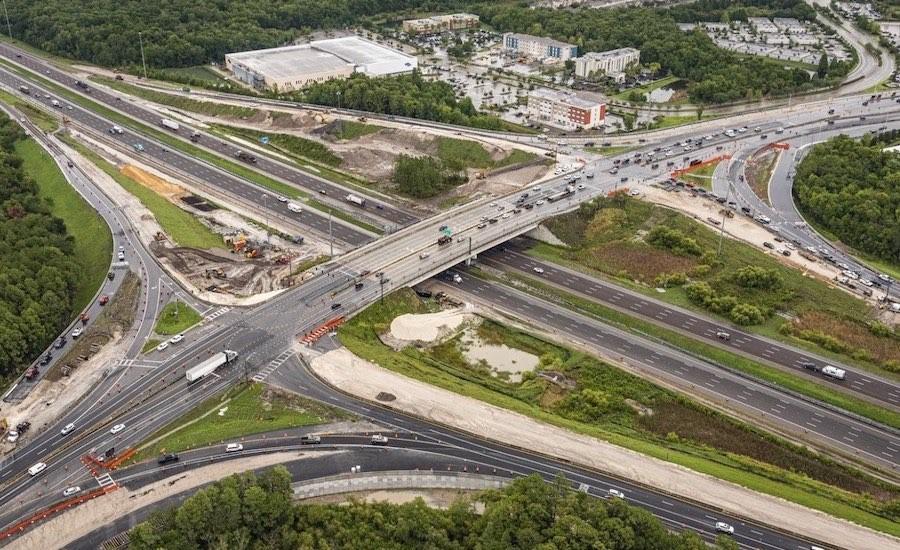 A 15-month dispute between D.A.B. Constructors and FDOT over issues on the I-75/SR 56 Diverging Diamond Interchange project in Pasco County led to the agency finding the contractor in default, a major factor in the firm's decision to shutter its operation. (FDOT photo)

The Florida Department of Transportation (FDOT) will soon choose a new general contractor to complete the diverging diamond interchange at Interstate 75 and Florida State Road 56 in Pasco County town of Wesley Chapel. The deadline for receiving new bids closed the third week in August.

The original $33 million project near Tampa is one of seven central Florida road projects that were left unfinished by the construction company in charge of the work when it announced that it was closing its business in July, noted the Tampa Bay Times.

After three decades of construction history in the region, D.A.B. Constructors, in Inglis, Fla., said that it took the action in the wake of a dispute with the state transportation agency. The ongoing projects collectively represent more than $200 million in contracts. Each of them is in FDOT's District 7, which includes Citrus, Hernando, Hillsborough, Pasco and Pinellas counties.

Delays in the diverging diamond project have been a hot topic for Pasco officials, who hoped the job would be done before this winter season. In addition, nearby residents and businesses also are looking forward to relief from congestion and construction caused by the project.

The Times reported that all seven road projects, which amounts to tens of millions of dollars in unfinished construction, will now be completed through the various surety bonding companies on each job. FDOT is dealing with each individual contract separately, while also addressing specific issues on job sites left behind when D.A.B. shut down its operation.

For its part, D.A.B. told Engineering News-Record that the company walked away from its ongoing projects after FDOT defaulted it from the I-75/FL 56 interchange project and allegedly failed to reimburse the contractor more than $10 million in costs on a separate $31.8-million contract.

D.A.B. officials also blame the state for design problems that prevented them from finishing the job.

On July 28, the state received letters from D.A.B. "informing us that it was financially unable to perform or complete the performance of the work as prime contractor, which constitutes a voluntary default by the contractor." As a result, on Aug. 3, the department declared D.A.B. in default for the other six projects as well, said Kristen Carson, spokesperson of FDOT.

Those projects included adding lanes and reconstruction work on Sam Allen Road, from FL 39 to Park Road in Hillsborough County; widening FL 52 from the Suncoast Parkway to U.S. 41 and widening FL 54 from Curley Road to Morris Bridge Road, both in Pasco County; and three projects to widen and improve

U.S. 19 in Citrus County for 18 mi. from the Citrus/Hernando County line to the southern edge of the Crystal River.

Carson told the Times in an email that FDOT is currently in conversations with the bonding companies to take the next steps to prepare to bid each of the projects. In several other cases, work on project sites to adjust some traffic control devices is under way.

At the FL 54 construction site, the agency expects to shortly complete maintenance of driveway access to businesses on the west side of the intersection of Eiland and FL 54.

At one of the Citrus County projects, though, the state has run into another problem, the Times learned.

Residents have raised the alarm that D.A.B. had allowed water drainage from the construction site into the Halls River. At the end of July, the Southwest Florida Water Management District sent FDOT a notice of permit violation for failing to protect water quality.

"The erosion control measures at this site have failed and illicit discharges are occurring," wrote John Powanda, compliance engineer from the water management district after a site visit.

Carson told the newspaper that FDOT is addressing those issues.

"Additional erosion control measures have been installed on the south end of the project on the east side of U.S. 19 and immediately west along a creek leading to Halls River in order to harden the area against further erosion," she said in her email to the Times.

She added that timing on the other projects will be based on original job timelines with an emphasis on timely completion "as they are still subject to delay penalties."