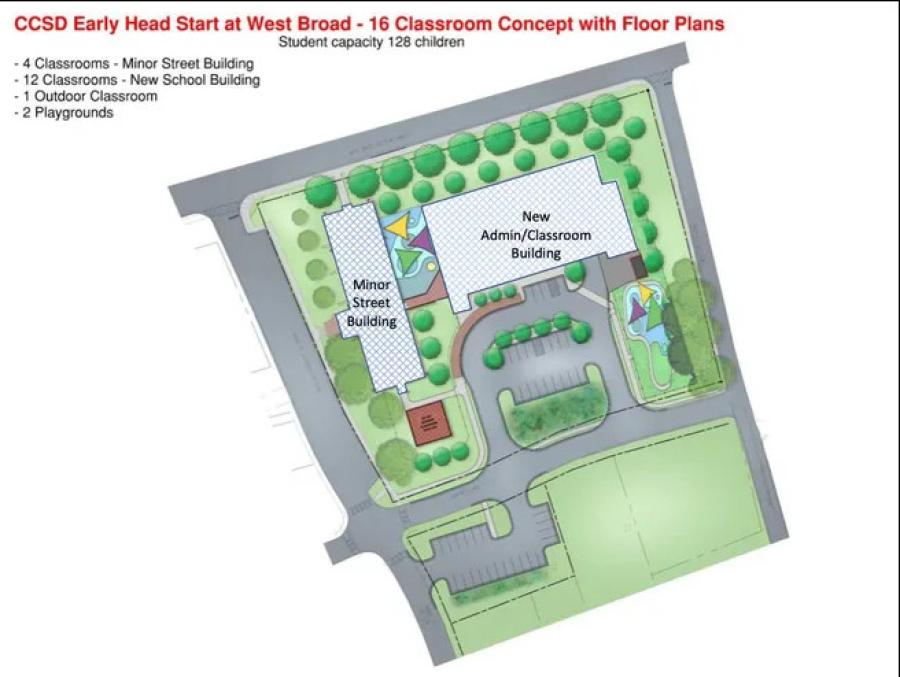 The Clarke County School District met with members of the community March 30 to get input on the building plans for the property, which will house an Early Head Start program, designed to serve children from eight weeks to three years old in families who are either at or below the poverty line.

An Early Head Start Expansion Grant was approved for the Athens school system, which will award it $4.4 million in the first 18 months of the grant period. The award will fund salaries and other costs for the operation of the program. With the monies, the program will also be able to add 112 new slots for students who qualify.

After the grant's initial year and a half has passed, the school system will receive an additional $2.6 million for four years, for a total amount of nearly $15 million across the next five years. The entire school building project, in addition to the grant, will be funded through $10 million from the SPLOST fund, a one percent sales tax in Clarke County.

To receive these funds, however, the West Broad Street Early Head Start facility must be completely built by March 2022. According to the Banner-Herald, to accomplish this goal, John Gilbreath, the director of facility planning and construction, said March 30 that the work would need to begin within the next 60 to 90 days.

The West Broad Street property is now made up of a trio of historic buildings that housed Black students during the segregation era. But through adaptive reuse, one of the structures — the Minor Street Building — will be preserved and transformed into new classroom space for the Early Head Start program. The other two will be removed and replaced with new facilities, including one that will house an additional 12 classrooms.

Local preservationists and community members, including retired Georgia Department of Labor official Fred Smith Sr., advocated to keep a second historic building intact, to be restored rather than replaced.

But the two-story structure must be completely rebuilt, the Banner-Herald reported, because school officials said that utilizing it was not feasible due to Georgia law that requires young students to remain on the ground floor.

With the construction, the new building will be 17,000 sq. ft. inside, and in addition to the dozen classrooms, it will have an administration suite and additional meeting spaces.

The property also will boast of having one outdoor classroom, two playgrounds, plus meeting space and a media center available for community use after hours.

Project officials presented seven assorted designs for the new structure during the March 30 meeting and community members were asked to select their top three options. The results of the survey will be used to draw the final plans, according to the Banner-Herald.

"This Early Head Start Expansion Grant is providing the funding necessary to not only have more dynamic facilities but also the crucial educational programming to help support families and children academically, socially, and emotionally," Clarke County School Superintendent Xernona Thomas told the newspaper.