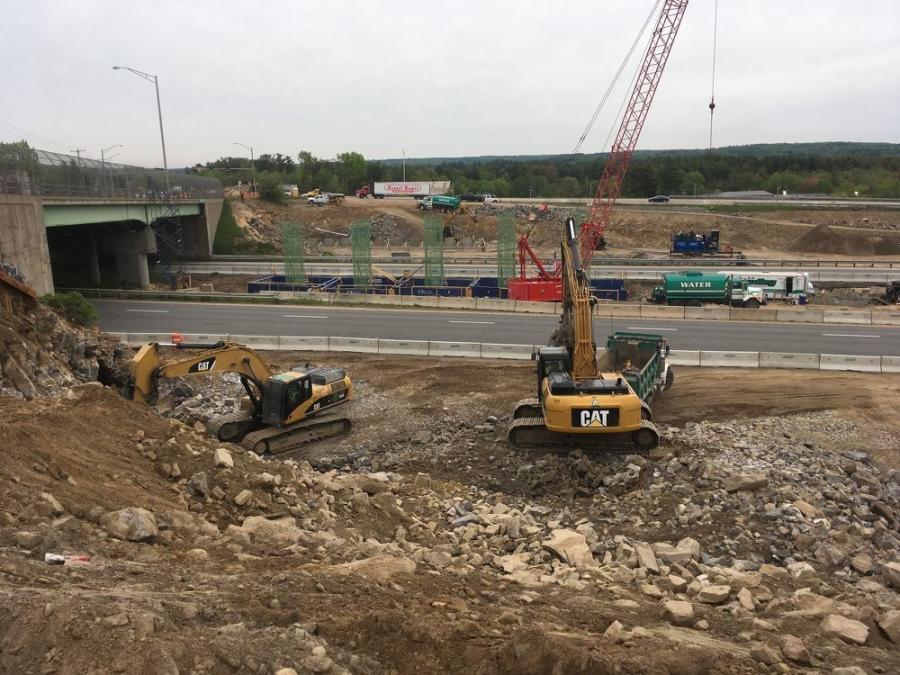 Rebar is placed for the piers of the new NH Route 102 Bridge over I-93.

The New Hampshire Department of Transportation (NHDOT) is in the final stretch of a 14-year, 20-mi. long reconstruction project along I-93. This massive $811.7 million project began in 2006 and will be complete in 2020. 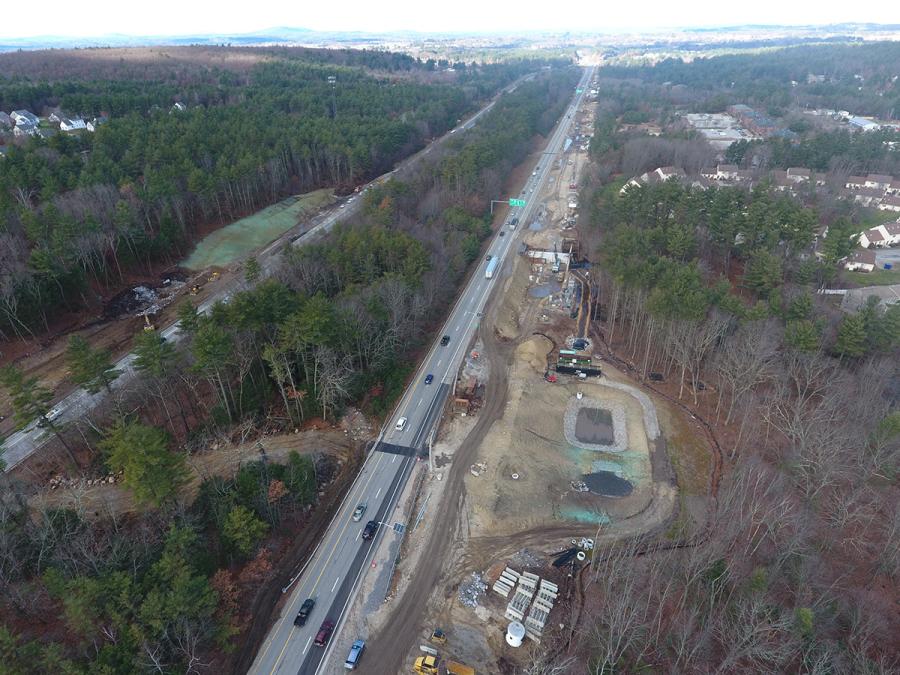 The main element of the improvement involves widening I-93 from the existing limited access two-lane highway in each direction to a limited access four-lane highway in each direction. NHDOT's “Four-Lane Selected Alternative” begins in Salem, N.H., at the Massachusetts/New Hampshire border and extends northerly through Salem, Windham, Derry and Londonderry and into Manchester, ending at the I-93/I-293 interchange.

The project was designed to accommodate space for a potential future rail corridor or other mass transit opportunity between the Massachusetts/New Hampshire stateline northerly to the Exit 5 Interchange. The potential light rail line within the highway corridor could be a link in a future rail system providing rail service between Lawrence or Woburn, Mass., (and ultimately Boston) to the south and the Manchester Airport and/or the city of Manchester, N.H., to the north.

To date, 17 contracts been completed, less the paving and guide rails of the newly constructed fourth lane.

Currently, there are four contracts under construction. The first is the reconstruction and widening of 3.5 mi. of both the NB and SB lanes of I-93 from the weigh stations north to Kendall Pond Road. Four bridges, I-93 NB and SB over North Lowell Road and over Fordway Extension will be widened to accommodate this work. R.S. Audley Inc. of Bow, N.H., won the bid at $49.4 million; total project cost is $54.4 million. 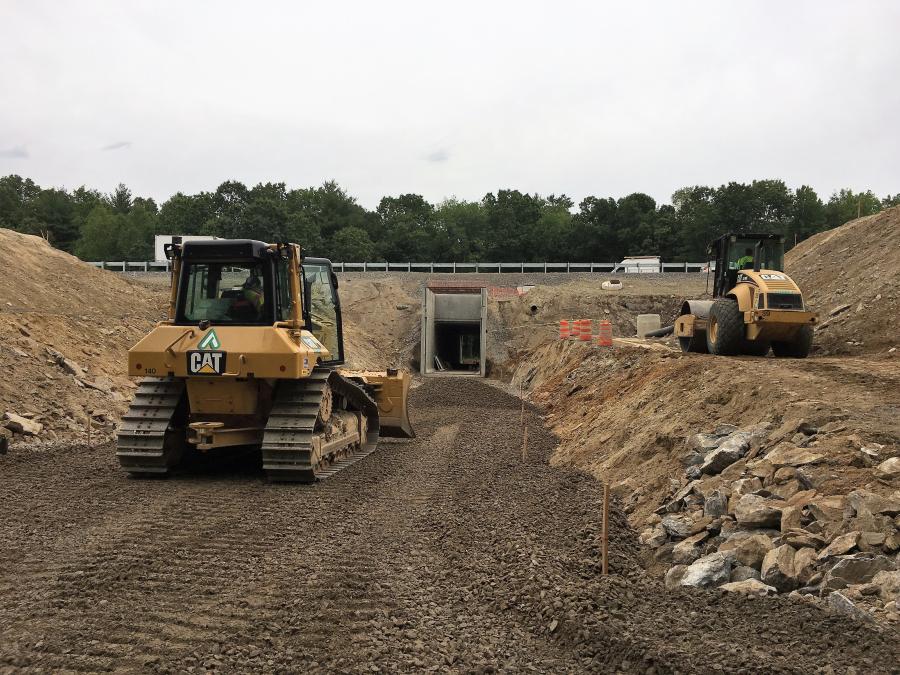 Recent activities include placing a pedestrian underpass box culvert, backfilling to subgrade and paving I-93 south of North Lowell Road Bridge. Drainage operations are progressing on I-93 SB between Fordway Extension and North Lowell Road. Crews are moving forward with placement of crushed stone on the mainline and aggregate for the North Lowell Road SB bridge footings. R.S. Audley is 70 perent complete on this project which will wrap up in fall 2019.

Just south of the Kendall Pond Road Bridges, the next project is taking place. Rehabilitation and broadening of approximately 2 mi. of the NB and SB lanes of I-93, proceeding northerly to just north of the Ash Street Bridge. Work to improve Exit 4 area includes the reconstruction of ramps and bridges. R.S. Audley was contracted for this segment also, with a bid of $62.3 million. 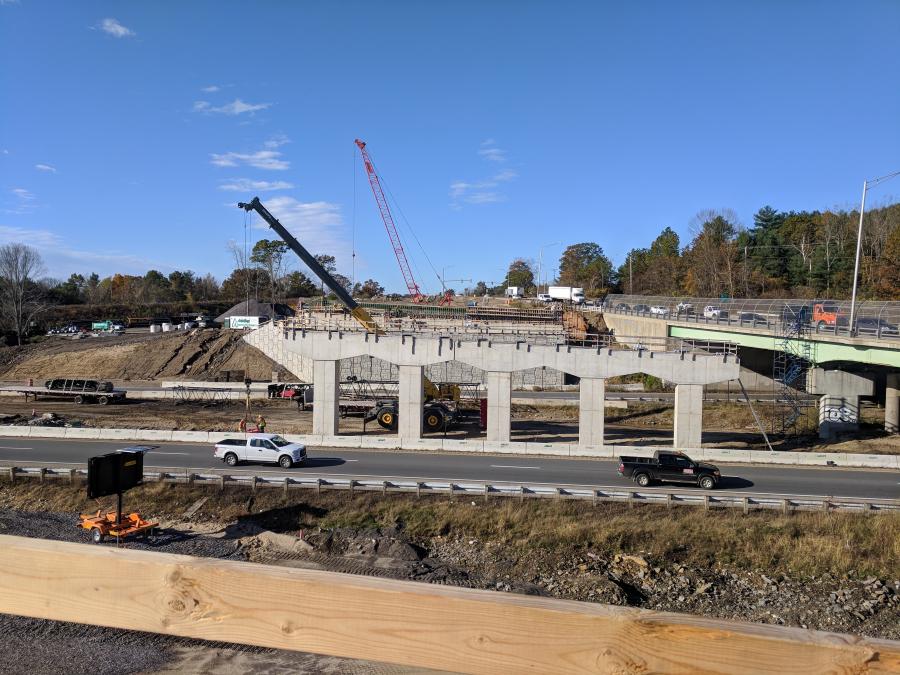 In fall 2017, Audley crews finished the installation of two drainage detention basins and began demolition and removal of the old I-93 NB. Paving of NB mainline was completed from Beaver Brook to a temporary Exit 4 NB off ramp. NH Route 102 Bridge abutments construction continued through the winter and work was started on the MSE wall and pier construction for the Ash Street/Pillsbury Road Bridge. The deck was poured for the NB Kendall Pond Road Bridge.

Widening preparation of I-93 NB mainline is ongoing, including fill sections and box widenings for culverts. Finishing work on structural steel to be set for the NH Route 102 Bridge including deck panels and steel bolt tensioning is currently under way. Next up is the removal of the box culverts at Beaver Brook and the construction of new bridges. Completion is scheduled for fall 2020, with total construction costs at $70.3 million.

Weaver began work on the $34.2 million contract in March 2017 with an ending date of fall 2020. Total construction costs, including bid, inspection, testing and oversight are $36.6 million. This project is 39 percent complete.

Upcoming activities include removing old pavement and clearing/grubbing on west side of the SB barrel to prepare for drainage placement. Work at the SB bridge over Stonehenge Road will continue with the northern abutment wall and wingwall construction. The NB Stonehenge Bridge concrete deck has been removed. Next in line, crews will finish demolition of bridge beams, backfill bridge abutments and clear trees on the west side of SB barrel.

The fourth contract being worked on at present will reconstruct and widen 3.3 mi. of northbound and southbound I-93, from just north of Exit 5 in Londonderry to the I-293 split in Manchester. Two bridges over Bodwell Road, the bridge over Cohas Brook, and several major culverts will be expanded.

Alvin J. Coleman & Son Inc. of Albany, N.H., is heading up the $45.9 million segment. They began in fall 2016 and are 42 percent complete. Work continues on the Bodwell Bridges, sound wall, drainage and pile driving. Subgrade and select materials installations will wrap it up by fall 2019.

Two final portions of I-93 will be advertised and constructed over the next two years. Bidding for the $10.5 million widening from Exit 1 to Exit 5 will begin this fall, with work starting in spring 2019. The last segment to be built in the area, tying into previously built improvements in the Exit 1 vicinity, involves reconstructing and broadening just over 1 mi. of I-93 from the Massachusetts state line and moving north towards Exit 1. This contract is still under design but is anticipated to be let in spring 2019 and be completed by the fall of 2020. The estimated cost is $13.2 million.

The rebuilding of I-93 is more than just a roadway and bridge construction project. NHDOT, the Federal Highway Administration (FHWA) and the state of New Hampshire's Office of Energy Planning (OEP) have invested in several other concurrent initiatives that will continue to maintain and improve the quality of life in New Hampshire. These initiatives include:

I-93 provides a critical link between the communities in south central New Hampshire and the greater Boston metropolitan area. When completed, the project will dramatically improve this important stretch of highway, reducing congestion and increasing safety for decades to come.