This year, the nation’s Interstate highway system turns 60 years old. With the holiday season being a busy travel time, a New England state looked back at some of the history of its highway system. 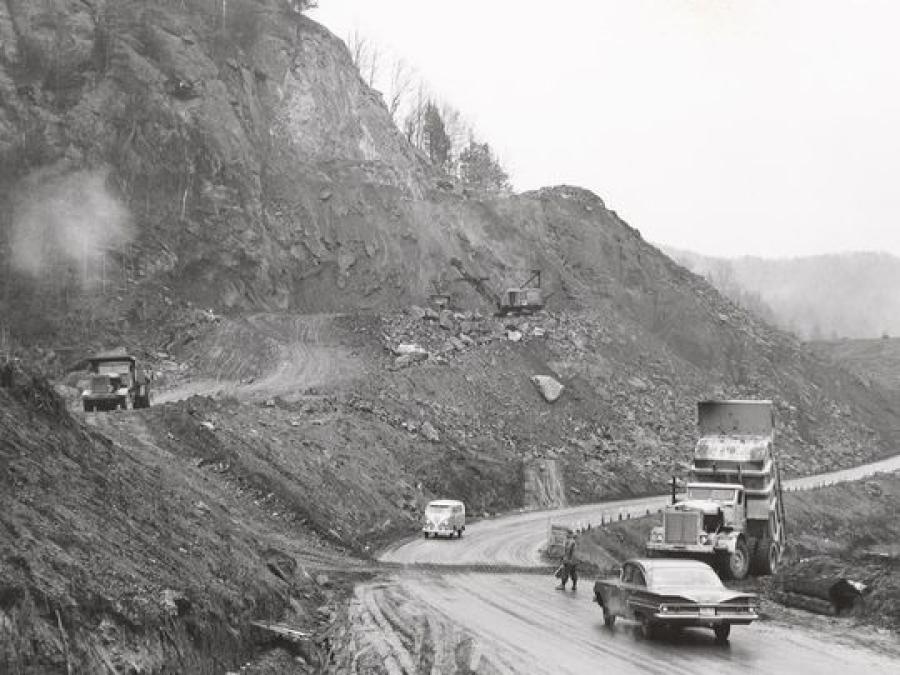 In 1956, a 61-year-old Swedish-born businessman, Joseph Johnson, was re-elected to a second term as governor of the state of Vermont. At the time of his re-election the cost of a new car in Vermont was $2,050 and gasoline was 22 cents per gallon. The New York Giants were about to report to preseason practice at Colchester's St. Michael's College under Offensive Coordinator Vince Lombardi and Defensive Coordinator Tom Landry.

There were thousands of small family farms dotting the Vermont countryside symbolized by a farmhouse and barn with cows grazing in green pastures. This was the Vermont brand. But the facts surrounding this bucolic setting were a stark contrast to those happy images. In fact, the growing season was short, the winters harsh and impassable and, with creameries scattered around the state, farmers had to travel long distances to deliver their products to market.

Farming was hard work that barely earned enough money to sustain a family and the state was losing almost 800 farms a year. Not just the hill farms were struggling. Even in Chittenden County, things were bleak. The woolen mills had closed in Winooski, the Ethan Allen Air Force Base was facing closure.

Hundreds of Vermonters couldn't sell their homes and had to travel to southern New England to find work, commuting back to Vermont each week on narrow, two-lane roads to see their families. But change was coming to the Green Mountains in the form of tourists seeking the calming, perfect country setting and snowcapped mountains for skiing. The “car culture” was about to invade Vermont.

On June 29, 1956, President Eisenhower signed into law perhaps one of the greatest public works projects in history, the Federal Highway Act of 1956. The bill created the National System of Interstate and Defense Highways. The New York Times called it a “Road Bill.” It was, in fact, a program that would construct 41,000 miles of limited-access roads linking cities and states across the country. Eisenhower's dream of “speedy, safe transcontinental travel” would replace the current unsafe and inefficient routes and provide a means for quick evacuation of areas in case of an attack. Under the terms of the legislation, the federal government would pay 90 percent of the costs ($25 billion) and the individual states would be responsible for the remaining 10 percent in matching funds.

The beginning of 351 Miles

Vermont's governor saw the benefits this highway system could provide his rural state and championed the legislative proposal of a $25,000,000 highway bond to cover the state's 10 percent funding match. The Legislature agreed to the amount and Vermont began a journey that would result in 351 miles of interstate highways enabling tourists and Vermonters a fast and safe means of travel within the state.

Phase one of the highway project called for the planning of the interstate routes. Right-of-way and acquisition work as well as utility relocation would be done on a much larger scale than had ever been done in Vermont before. The designs called for wider lanes with medians between northbound and southbound traffic, as well as cloverleaf entrances and exits built for high-volume traffic with faster speed limits.

These designs required extensive property right-of-way work. It was during the property acquisition stage that the vision of the future met the stark reality of the true cost of the project: It was not simply the loss of thousands of acres of land, but the loss of homes, family farms and the dissection of farms from their pasture land. The impact of Interstate construction transformed not just the physical landscape; it would erase historic, cultural and commercial locations. The idyllic country settings like small town general stores, diners, service stations and other small businesses situated along the old routes would suffer the loss of travelers and many would be lost forever.

But there are examples that show the interstate was sited with care. Along the Winooski Valley, the I-89 avoided the villages of Richmond, Jonesville and Waterbury. Between Montpelier and Royalton, the roadway ran along the ridge lines to minimize impacts on communities along the valley floors.

One farmer would not sell

Perhaps the most somber example of the repudiation of land acquisition came from an Ascutney farmer named Romaine Tenney. After prolonged and futile negotiations with the state, it was clear that Tenney would not sell the farm which had been in his family for 150 years. The state took steps to acquire the farm through the process of eminent domain — in an effort to demonstrate that the use of the property as a highway was for a greater good than for one family's farming operation.

The action wound through the court system and the state prevailed. On the day the crews arrived at the farm with a court order to demolish the house and outbuildings to make way for Interstate 91, Romaine Tenney committed suicide by barricading himself inside the house and setting it on fire. “I was born in this house and I am going to die in it,” said Tenney. His body was later found in the remains.

The fact is that time, harsh weather and deferred maintenance had taken a toll on Vermont's roads. The official state report in 1956 showed: 195 miles of Vermont rural roads to be in “Bad Condition”, 505 miles were listed in “Poor Condition," 514 miles were “Fair” and only 770 miles were in “Good Condition." In contrast, the 1956 US Bureau of Public Roads mandated that the new interstate be required to safely accommodate not only current traffic loads, but be able to handle projected traffic volumes all the way into the year 1975.

Upon completion, Interstate 89 would connect the state capitals of Montpelier, Vermont and Concord, New Hampshire. And so it went mile after mile, year after year until the interstate highway sections were built and open to the public. The last of the sections (I-93) was opened in 1982.

Sixty years on, work continues on the interstates in Vermont to ensure that they remain a safe and resilient part of the transportation system. Building new bridges, maintaining the old ones, incorporating the latest improvements in safety and new technologies that improve efficiency are all part of the ongoing stewardship of one of our most valuable assets. A generation before us sacrificed to build it. We, in turn, must preserve it for the next generation.

(Brent H. Curtis is the public outreach coordinator for the Vermont Agency of Transportation.)