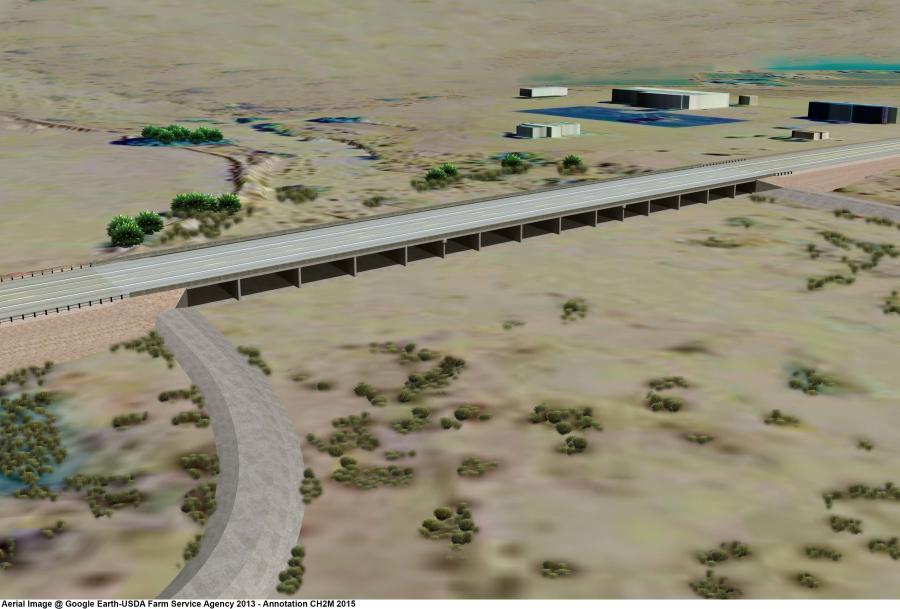 An artist's rendering of the project, created in February of 2016. Image courtesy of AZDOT.

Drivers who have been anticipating a new bridge to carry U.S. 95 traffic over the flood-prone Fortuna Wash don't have much longer to wait. The bridge is expected to begin taking traffic by the end of November.

U.S. 95 is the only north-south route connecting Yuma with Interstate 10 and Arizona locations along the Colorado River. Until now, it has taken drivers through the wash and has been subject to unexpected closures during heavy rains.

The bridge will make U.S. 95 a safer and more-reliable route for agriculture, international trade and seasonal visitors.

“This bridge is a crucial safety project and will be a huge benefit for the entire region,” said Paul Patane, ADOT Southwest district engineer. “Motorists and commercial vehicles rely on this roadway every day, and with this they can be confident that they won't be stopped when the wash is flooded.”

The bridge also will make travel more reliable for employees and cargo shipments at Yuma Proving Ground, a U.S. Army facility with more than 3,000 military and civilian employees. The area's largest employer, it is one of the largest military installations in the world and home to General Motors' hot-weather vehicle test facility. It has an economic impact of more than $430 million annually.

The Fortuna Wash bridge is designed to accommodate four lanes of traffic but will be initially striped for two lanes with center-turn lane. The $15 million cost is partially funded by a $3.2 million federal grant.