New Haven Harbor Crossing Project Due to Complete in November 2016 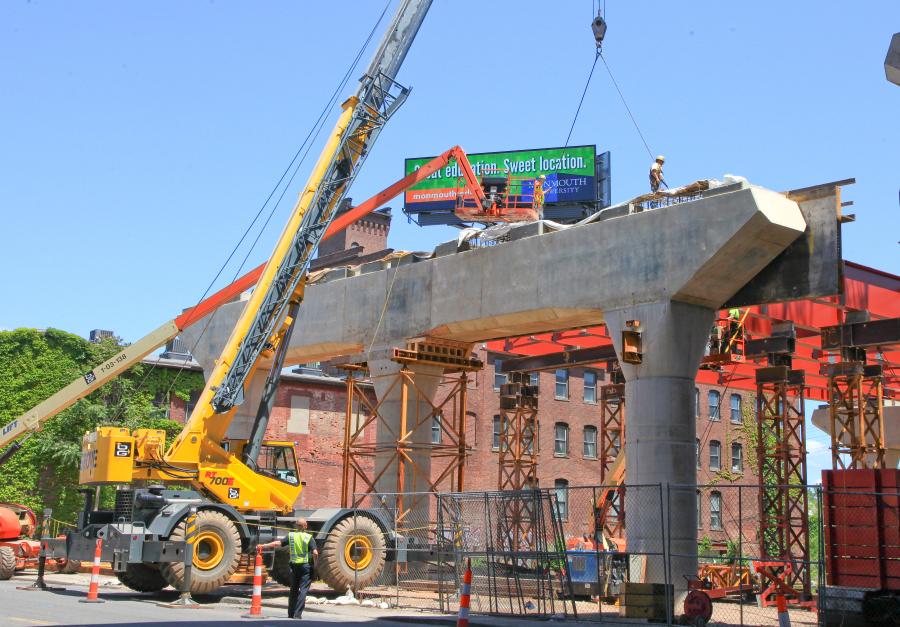 “The reconstruction will provide three travel lanes on I-95 through the Interchange with the elimination of the left lane exit and entrance ramps and provide a two-lane connection to I-91,” stated the web page for the project. “Included in the reconstruction are 21 new or modified bridges and twenty one retaining walls. To be more specific, I-91 over Chapel Street, I-91 over Wooster Street on-ramp to I-95 northbound, multiple I-95 and I-91 crossings over Water Street, Route 34 westbound over Brewery Street, and I-95 over Canal Dock Road. Sargent Drive, from Canal Dock Road to Brewery Street will be realigned.

“Looping ramps adjacent to Sargent Drive/Brewery Street will be removed,” it added. “Water Street, from East Street to Brewery Street, will be widened to two lanes in each direction. The Wooster Street on-ramp to I-95 north will be retained. Full shoulders, a new median barrier, drainage, signing, and lighting will be provided on I-95 throughout the program limits.”

The project was designed by H.W. Lochner and URS. Construction began in April 2011.

“Contract E is being done to accommodate the new alignment of the newly built Q Bridge to provide a two-lane connection, interstate-to-interstate,” said Vlad Kaminsky, ConnDOT's supervising engineer overseeing the “E” project. “It's part of the reconstruction of the interchange for I-95, I-91 and Route 34 to provide three lanes in each direction of I-95. We just increased the capacity of I-95 in the vicinity of the Q Bridge. The original interchange was built in the 1950s — it was designed to accommodate 14,000 vehicles per-day and right now it accommodates 160,000 vehicles per-day. The new Q-bridge is designed for a service life of up to 100 years.

The main challenge for the project was to build a new interchange on the footprint of the existing interchange and simultaneously accommodate the traffic.

“We're talking about the gateway to New England and we did not have the option to close even one lane of the existing interchange,” said Kaminsky. “The job was divided into six stages, with each stage to have at least three sub-stages. Sometimes we were looking for six to eight traffic shifts just to start a new stage. We had to remove 21 existing bridges and replace them with 19 new ones designed to meet or exceed the latest American Association of State Highway and Transportation Officials design requirements.”

Kaminsky noted that the project is a success due to the “team effort” spirit that has united the contractor, designer, and ConnDOT.

“This is a big and complicated project,” he said, “and there are more than 5,000 sheets in the design plans, which are divided into 13 design subsets. The job is running under-budget and we're one month ahead of schedule. We're working nearly 24 hours a day and with no winter shut-downs. Close attention is paid to the schedule. Some of the work is not feasible to be done in the winter due to temperature restrictions, so we focused on demolition.”

The considerable night work had to contend with significant traffic and work zone safety provisions were enhanced.

ConnDOT has an onsite team, including a project engineer and variety of engineering professionals and inspectors to continuously monitor the construction activities and respond to differing site conditions.

“We've done a few of these 'Q corridor' projects,” said John Gemetro, an O&G vice president, who pointed out that the company completed the C1 and C2 contracts. “We just finished the last setting of new structural steel. There is some concrete work left to do, but the majority of the work is more civil right now — milling, paving, bridge joints, and overhead signs.”

For many years the majority of the work focused on the bridges, and much of the project has been subject to stage changes.

“We've moved a lot of traffic ramps and traffic on I-95 and I-91 so that we could do all the structures in phases,” said Gemetro. “We had a number of bridges being built simultaneously. The big thing for us is moving traffic. We had 28 minor stage changes and 14 major ones. Even if we were the only contractor here, that would be a challenging issue.”

Gemetro praised the efforts of the O&G engineers and those with ConnDOT.

“We're very good with turnaround times for the review process and it helped with our scheduling,” he said. “We have very seasoned crews and most of our overhead staff has been with us for quite a while. The bridges themselves were not very unique, but there were peaks and valleys in the schedule. The winter of 2014/15 was very challenging and as soon as the weather broke in the spring, the entire job site was working overtime for the duration of the year. It was a challenge to keep up with the momentum.

“When we assembled the final section of the existing Pearl Harbor Memorial Bridge and took down the last section of it,” he added, “it was a historic moment for us. From that point we constructed the new span. With all the work we have done so far, the big picture is now coming into play and we can tie everything together.”

The work has the crews doing day and night shifts from Mondays to Fridays, with nearly 150 JV and subcontractor personnel on the day shift and 50 at night.

The subcontractors include: High Steel Structures for the fabrication of structural steel; Oldcastle Precast for concrete pile and barrier; Ducci Electrical for the lumination; ADF Industries for the guardrail and overhead signs; Star Construction for the drainage work; and Santoro Inc., for bridge joints.

“All of the concrete demolition material and bituminous concrete millings were brought to a subcontracted recycling facility to be turned into a process material which was use on the project for various gravel related items,” said Gemetro. “Onsite storage was not a big concern other than the delivery of the new structural steel. In some cases it was delivered and set in place all in one motion because of the size of the girders.”

“A constant occurrence on this project was relocating the cranes,” said Gemetro. “These cranes were dismantled numerous times — at some point the mechanics could probably take a crane apart blindfolded. Keeping the equipment running around the clock has been a big challenge for our onsite mechanics. It is most important to make sure everything is running for the night crew each night. General maintenance has gone well on site with major repairs and yearly inspections being done at our offsite repair facility. Kevin O'Connell of Shawmut Equipment has been a big help with the cranes along with D.C. Rental's for the JLG manlifts.”

“This project is not something that just anybody can do,” he said. “We have really good crews and as with everything, the more you do it, the better the whole operation will proceed efficiently, be it the dismantling of cranes or the building of bridges. We have a superb relationship with ConnDOT, the engineers, and designers. This project will turn out to be a great success for the owner and us, and it has a lot to do with everyone having a positive attitude.”

Gemetro noted that Tutor Perini was responsible for much of the engineering for the demolition of the existing bridges and steel erection of the new bridges.

“We've done a number of joint-ventures with Tutor Perini across the country,” he said. “We mainly work in Connecticut and Massachusetts, but have been involved in projects in California, Illinois, Louisiana, and New York.”