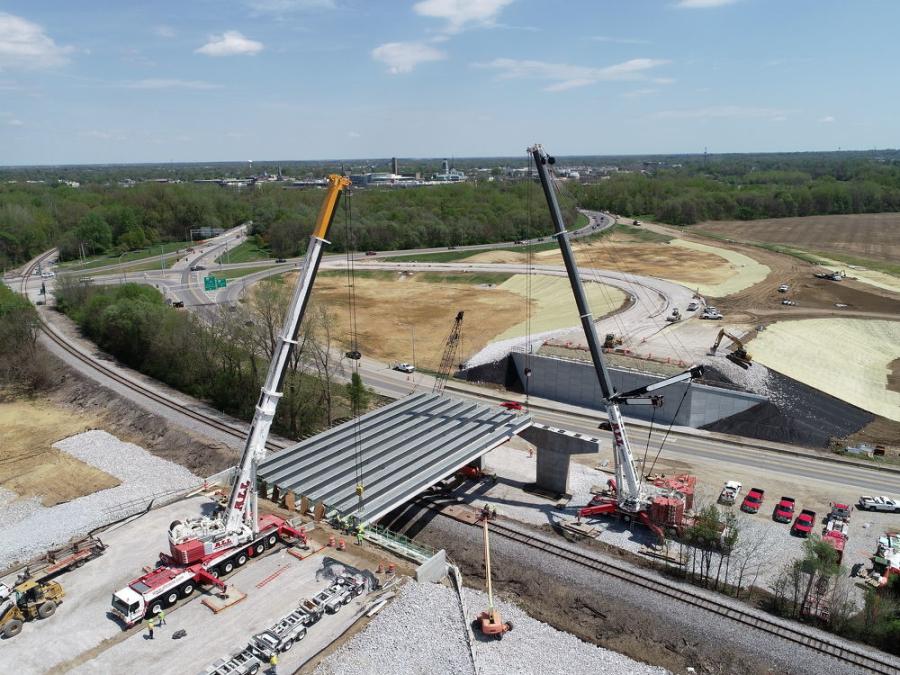 The overpass part of the project involved driving piles, setting 26 beams (13 by 2 spans) with half the beams set over the railroad, placing concrete for the deck and barrier rails. (Milestone Contractors photo)

In Bartholomew County, Ind., construction teams are working to complete a $31.5 million project designed to reduce current and likely future delays to traffic on SR 46, due to train activity at the L&I rail crossing. It also will ease congestion and improve vehicular mobility at the SR 46/SR 11 intersection.

"This project is being completed through a partnership with the city of Columbus, L&I Railroad and CSX Railroad," said Natalie Garrett, Indiana Department of Transportation (INDOT) public relations director. "It's an important investment in infrastructure that will allow motorists to get where they need to go in a quicker, safer manner. 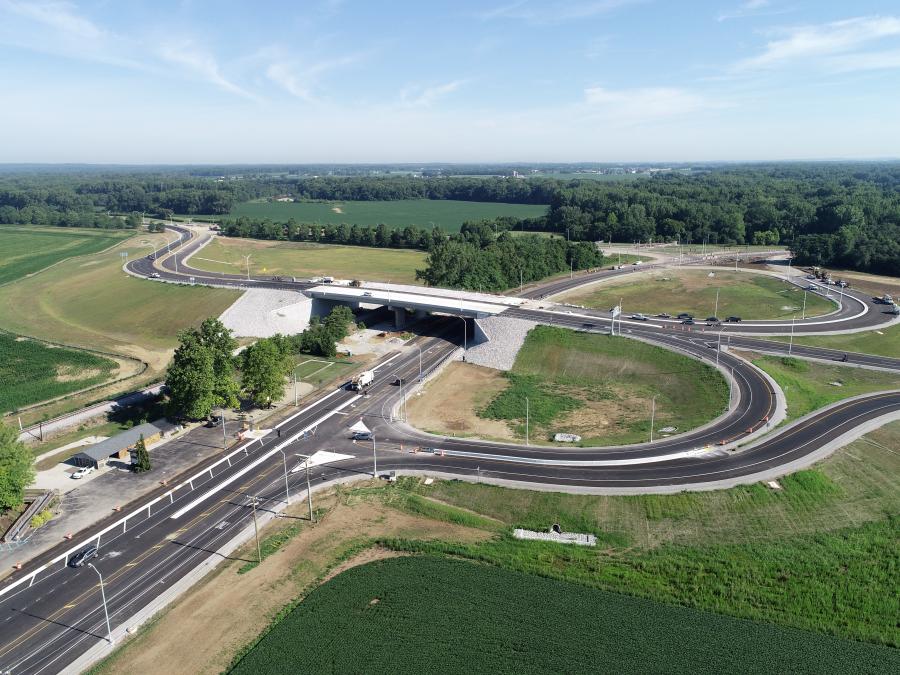 "The number of trains crossing at this location is expected to increase significantly in the near future, from an average of two per day to 17. The increase in train volume would significantly increase wait times and delays for traffic in the area."

The work is being completed now, ahead of the projected increase. Timing of other projects planned in the area also was taken into consideration for maintenance of traffic purposes.

The majority of work on the project is in its final stages. Crews recently finished placing the final lift of asphalt and permanent pavement markings are being applied. After that, crews will continue with removal of the old alignment of SR 46, seeding, sodding and clean-up.

The two railroads involved are Louisville & Indiana Railroad (L&I) and CSX Railroad. The new alignment of SR 46 goes over the railroad tracks and SR 11, which eliminates the previous railroad crossing and traffic signal. New bridges carry both directions of realigned SR 46 over SR 11 and the railroad. New interchange ramps and a "Green T" intersection provide access for motorists.

Construction began in November 2019, and will be contractually completed next spring. The new interchange opened to traffic in phases earlier this summer.

Garrett said completing projects in stages is typical in road construction, so access can be maintained as much as possible for drivers in the area. Traffic impacts were minimal in the early phases of the project, as crews were working adjacent to SR 46. More significant impacts started in the summer months, including a 30-day closure of SR 11; rolling closures for beam setting over SR 11; and lane closures on SR 46. The area serves approximately 25,000 vehicles per day. 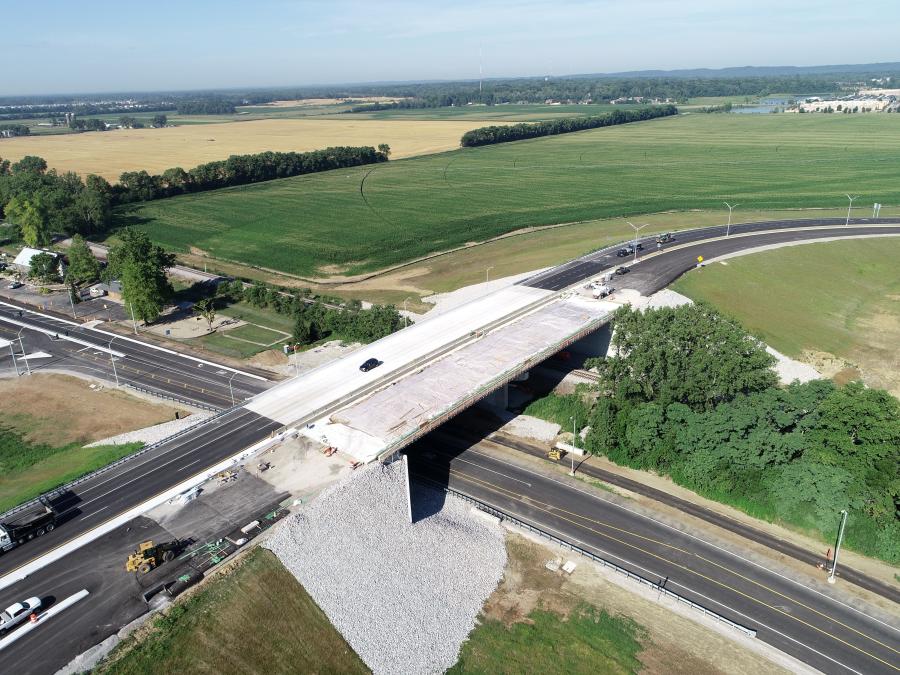 As part of the assignment, bridges were built over SR 11 and the railroad for the new alignment of SR 46, a deck overlay was completed on the 3rd Street Bridge (SR 46 WB) and reconstruction and drainage work took place on SR 11, in addition to earth-moving and utility activities.

"Bridge work was a huge part of this project," said Garrett. "The new bridges constructed carry the new alignment of SR 46 over SR 11 and the railroad, which improves safety and reduces traffic delays due to trains and signals."

Matt Harding, INDOT section engineer said the biggest challenges regarding the contract were maintaining the current traffic through the area and delivering a project with a very aggressive completion date.

"The new interchange was scheduled to be opened to traffic in the new configuration 12 months after the contract was awarded. The contractor was limited to closing the minor highway [S.R. 11] for a maximum period of 30 days during the month of June, and could only restrict traffic on S.R. 46 to one lane either direction. The contractor was able to limit the S.R. 11 closure to 17 days and has so far limited restrictions on S.R. 46 to a few weeks in either direction."

The overpass part of the project involved driving piles, setting 26 beams (13 by 2 spans) with half the beams set over the railroad, placing concrete for the deck and barrier rails. Harding said dealing with railroads requires a great deal of coordination.

"Any work over the railroad or where equipment could potentially foul the tracks required a flagger from the railroad to be present. The bridge beam setting had to be scheduled around rail traffic."

According to Nathan Gaskill, Milestone Contractors L.P. project manager, the undertaking has had many moving parts.

"This included coordination of 35 dump trucks, other construction equipment and project personnel," he said. "We wanted to keep the project progressing on time, so everyone needed to be where they were supposed to be at the right time. Traffic impacts were minimal early in the project, but ramped up during the summer months in the form of lane closures on SR 46 and a full closure on SR 11." 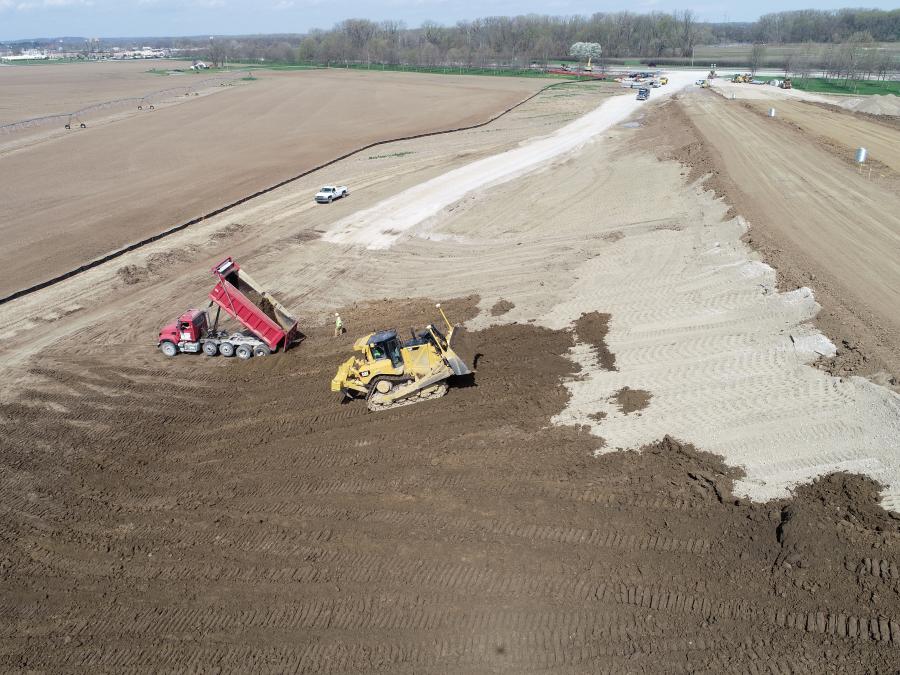 Laying the final lift of asphalt for the project was completed under overnight lane closures, with flagging to minimize traffic disruptions and delays. Early on in the construction process, crews focused on earth-moving work and utility relocations, followed by bridge work and paving.

Gaskill noted that previous lanes of SR 46 have already been removed. Those sections of roadway will no longer be in use. Both bridges on the project, meanwhile, were built from the ground-up. This included multiple days of beam setting and concrete pours to prepare the bridges for traffic.

Gaskill stressed that safety and communication are of utmost importance when working with or near railroads.

"We conduct daily safety briefings at the start of each day, where we stress the importance of being aware of your surroundings and communication, among other things. Flagmen, safety training and insurance are requirements on the job."

To date, the project has not been significantly affected by the elements.

"We have been pretty lucky as far as weather," said Gaskill. "Dry conditions allowed us to start excavation earlier than expected."

A variety of heavy machinery is needed to carry out the work. 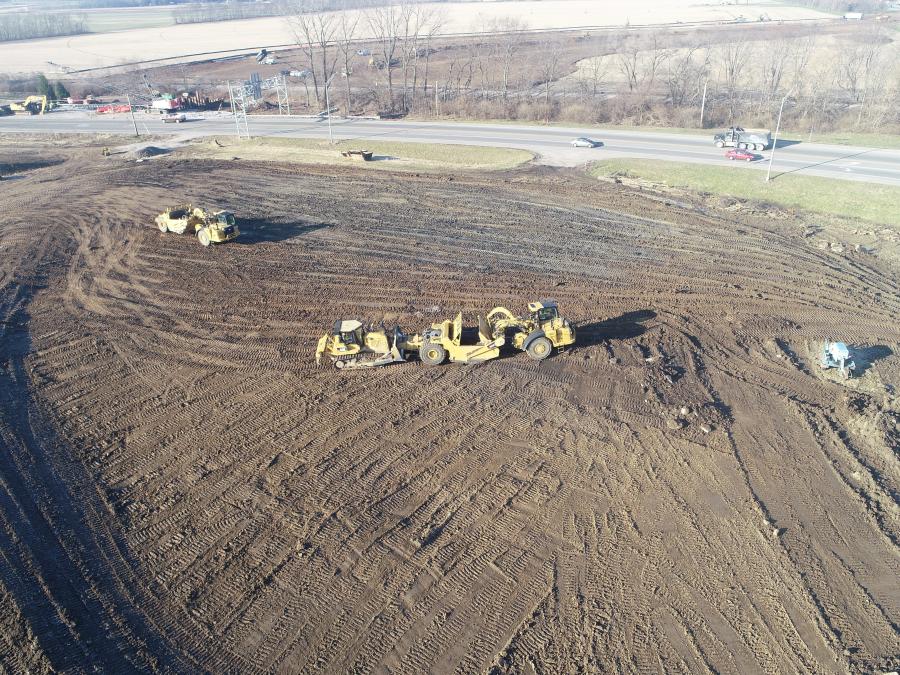 "Most of our equipment is Cat, including excavators, haul trucks and dozers. It's being used mainly to move materials to and from the job site. Main materials include dirt, concrete and asphalt."

"There were multiple utilities that were relocated during this project, in order to get them out of construction limits," said Gaskill, who added that tree clearing was minimal on the project. In addition, all INDOT and Department of Natural Resources specs were followed for the Indiana bat and northern long-eared bat population in the area.

Crews have worked mostly 12-hour days, seven days per week, if needed, especially at the beginning of the project. INDOT and the city of Columbus entered into a 50/50 funding agreement, with railroads contributing five percent of the project costs. CEG