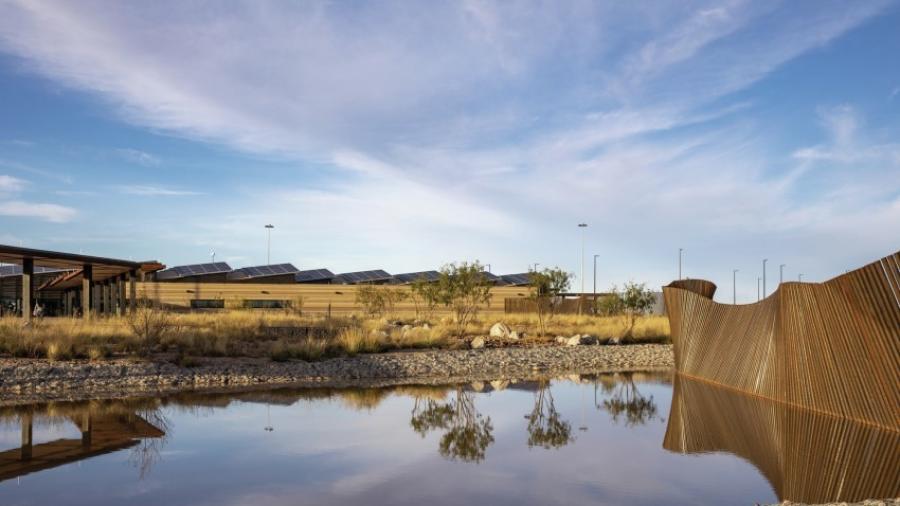 The Columbus port of entry, designed by Corpus Christi-based Richter Architects, has earned recognition from the American Institute of Architects and Texas Society of Architects.

COLUMBUS, N.M. (AP) — The construction of a 30-ft. border wall marches on in the southern New Mexico desert — a real and symbolic barrier to entry. But where the U.S.-Mexico border wall ends, a tiny border crossing has won top architecture awards for its welcoming design.

The Columbus port of entry, designed by Corpus Christi-based Richter Architects, has earned recognition from the American Institute of Architects and Texas Society of Architects.

The port — with its wide covered walkway, solar panel-topped roof and south-facing windows — is built largely of the same rusted steel as the border wall. But the look and feel of the port is design to invite in, not keep out.

The slated roof undulates like the mountainous desert landscape that surrounds it.

Indigenous plants and grasses thrive in stepped landscaping around the walkways to trap water where rains used to flood the port and clog walkways with thick mud. It makes for a safer passage for the hundreds of U.S. citizen children who cross from Palomas each weekday to attend school in Columbus. 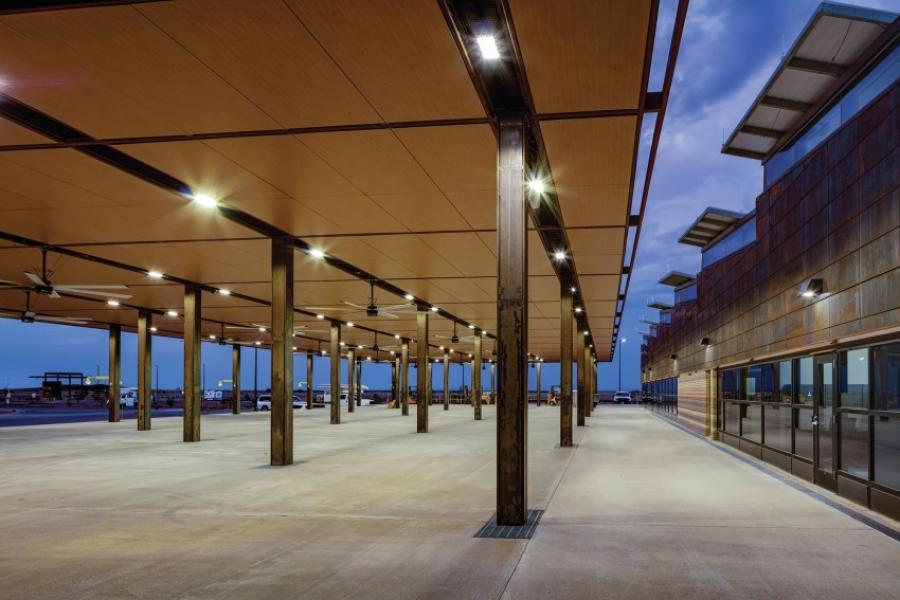 "Land ports of entry generally are very complicated," said Elizabeth Chu Richter, half of the port design team that includes her husband, David Richter. "They're multi-modal. You have passenger vehicles coming through, pedestrians, cargo. or even a dog. There can be a lot of chaos.

"What this project tried to do is bring a sense of order and a sense of welcome as you cross the border on a daily basis," she said. "That's to really humanize it, to make it a feel-good experience."

The American Institute of Architects recently awarded the port its "Committee on the Environment" Top 10 award for design excellence and sustainability. The award judges projects on the basis of their social, economic and ecological value.

The award jury commented: "A port of entry is a challenging building type. The designers in this project not only met that challenge, but achieved more by showing us how the architecture of any kind can make human environments healthy and dignified. This is a thoughtful, durable building made to last."

Separately, the Texas Society of Architects chose the Columbus port design as one of 19 projects recognized from 205 entries around the state.

"It's an effort to connect people with the land they inhabit and to create a space where crossing the border can be celebrated, once again,"' wrote Jesse Miller, an architect at Megamorphosis in Harlingen, for Texas Architect magazine.

"Aside from the way it looks, it's more functional," he added. "The cargo facility is way better. Before, it was very, very small. Especially during chile season, you didn't have a lot of room for the trucks to be in there. And it flows better."

The port sees a surge in traffic in the late summer and autumn harvest seasons, as farmers in Mexico move green chile, jalapenos and other produce to processing plants on the U.S. side.