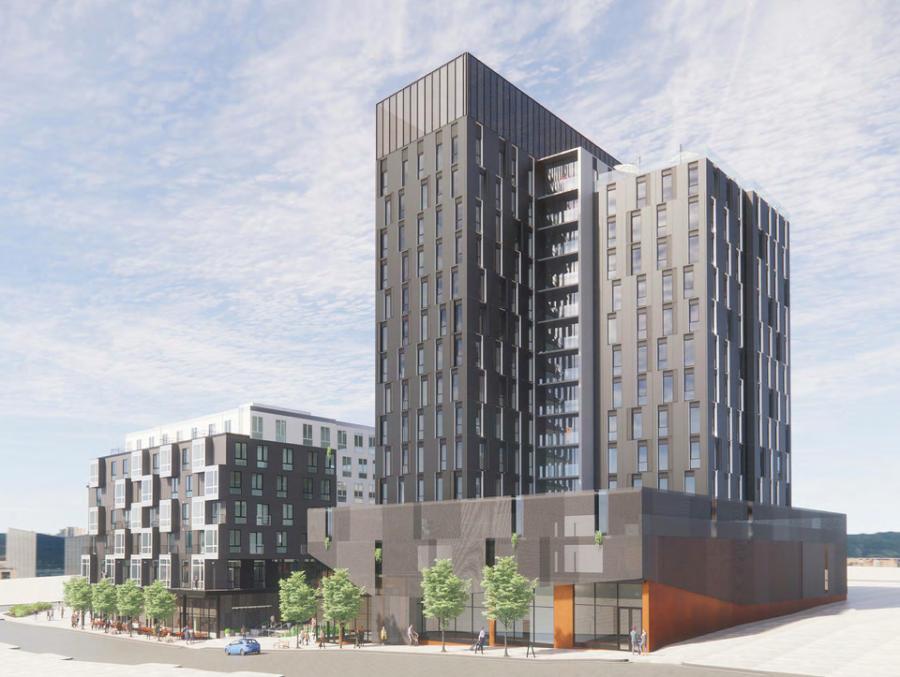 The plan for GeerHouse on the edge of downtown Durham. (Durham City-County Planning Department rendering)

Workers have broken ground on a development that aims to capitalize on the popularity of a nightlife and restaurant hotspot on the edge of downtown Durham, N.C.

The GeerHouse development in the city's Foster and West Geer Streets Historic District centers around a renovated and expanded Motorco Music Hall. The builders plan to add 328 apartments, 16,500 sq. ft. of retail space and 322 parking spaces.

The Raleigh News & Observer reported that since 2019, the partnership behind GeerHouse has bought up half the block south of Geer Street between Rigsbee Avenue and Foster Street, at a cost of more than $6.2 million, county records show. They now own 2.37 acres in the commercial district.

Sean Wilson opened Fullsteam brewery — Durham's oldest — in 2010, and he has had a front row seat to the area's growth.

"We were one of the first businesses to take a chance on this area," Wilson told the News & Observer. "It's been quite a surprise to see it develop to this extent."

A year after Fullstream opened, the Geer Street Garden restaurant came along, followed by the arrival of the Cocoa Cinnamon coffee shop in 2013. All three popular stops occupy corner lots at Foster and Geer streets.

The first phase of GeerHouse calls for a sprawling seven-story building that will wrap around Motorco Music Hall. The designs call for 220 apartments and more than 13,000 sq. ft. of commercial space intended for restaurants and retailers. Motorco itself will expand to 8,000 sq. ft. with the extension of its covered patio.

The second building will rise 15 stories, adding 108 apartments and another 3,300 sq. ft. designed for commercial use.

The parking decks incorporated within each of the two buildings will add 304 spaces. On the street, another 18 parking spaces can be found among the three surrounding roadways.

Four Points, the Washington, D.C.-based developer behind the project, did not respond to requests from the Raleigh newspaper for comments about the project.

A road closure began the second weekend of March for Foster Street between Geer and Corporation streets, with Foster expected to remain closed until April 7 for storm drain and utility work. Similar road closures will eventually be required for Geer Street and Rigsbee Avenue, according to plans filed with the city.

Business owners interviewed by the News & Observer all said the construction, as well as the street closures, would prove challenging to them but will pale in comparison to the damage inflicted by COVID-19.

Fullsteam Brewery faces the construction from its home on Rigsbee Avenue.

"We just have to adapt," Wilson explained. "Long-term, density and infill [are] good for Durham. Short-term, it's going to still be a challenge coming out of two years of the pandemic."

He added that for Fullsteam, which as a manufacturer is running near full capacity, the hardest part has been working through the water and electrical outages.

"It's one thing to deal with the challenges of parking, noise, etc.," he continued. "But as a manufacturing business, it's incredibly challenging to get no warning that we might not have water, electricity or a way to get materials in or out of our production space."

Others Worry About Area's Changes

But the long-term impact of an evolving Durham weighed more heavily on the minds of some downtown Durham business owners.

"There's been many of these things that look exactly the same," Magowan said of the apartment buildings. "They're doing this all over the world, [in] every city in America that has a growing economy. The idea is to build as cheaply as possible, pump the value up and then sell immediately."

He told the Raleigh news outlet that was skeptical GeerHouse's developers had considered what this lot and Durham need.

"It's all based on the desire to turn money into more money," he explained. "[It] may benefit this individual restaurant because I have 300 people living on top of me, but I can't say I think it's good for the community."

"We live in a very special place," he noted. "How do we make it not just about money and improve the standard of living — and not just for a small group of people, but for everybody? How do we keep embedding that into every move we make?"