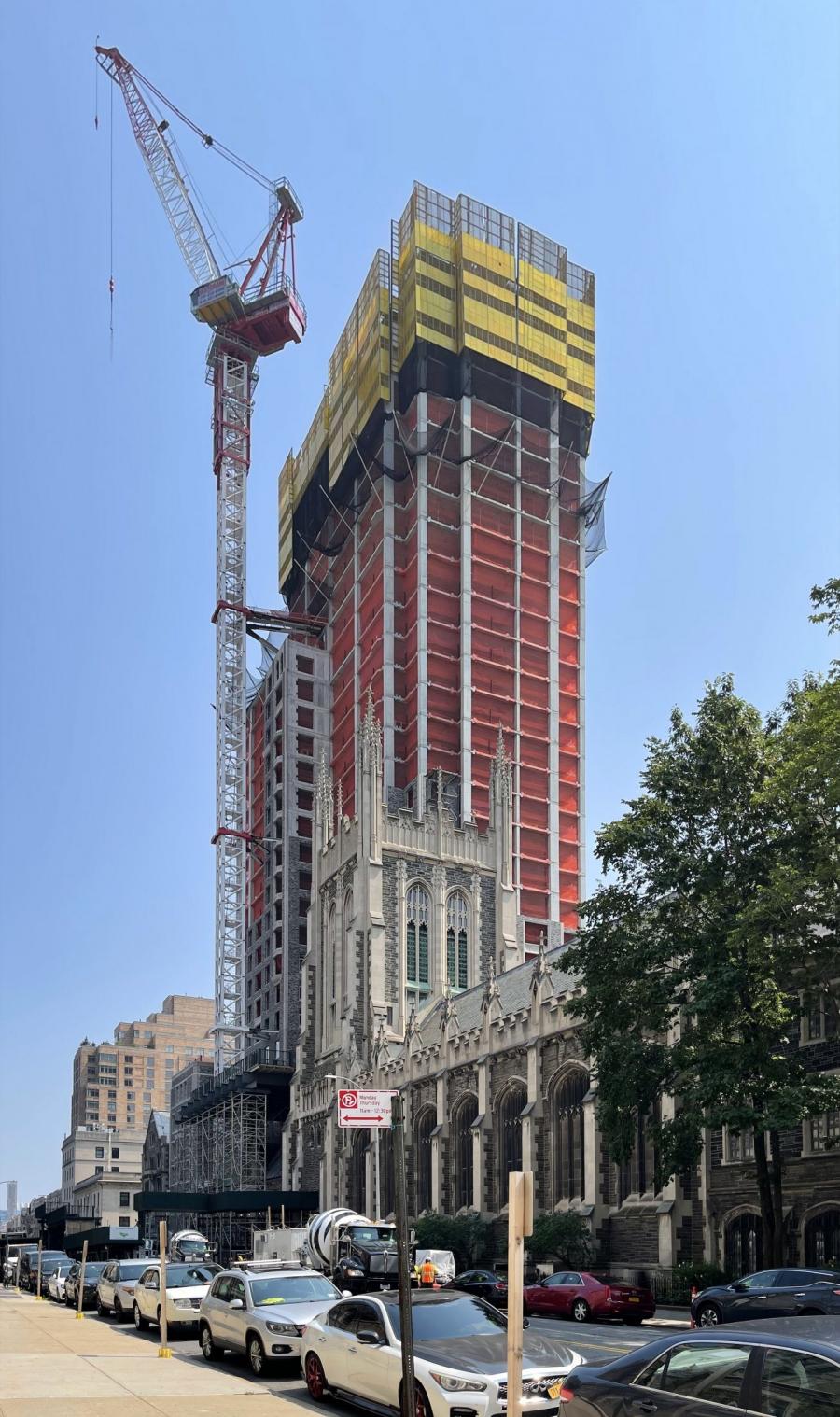 Construction on 3041 Broadway, a 42-story mixed-use tower in New York City's Morningside Heights, has soared past the halfway point, with only a dozen or so floors remaining to be built before the tower tops out.

When completed, the building will encompass 350,000 sq. ft. for private condominiums as well as institutional offices, faculty housing and classrooms for the Union Theological Seminary. The project is part of the institution's $125 million campus rehabilitation.

A 182-year-old nondenominational religious education and social justice center, the seminary takes up a full block along Broadway, between West 120th and West 122nd streets. The property is located by the corner of Claremont Avenue and West 122nd St., directly across from Riverside Church, and the tower is being constructed with the use of air rights from the seminary.

Its buildings, though, constructed in 1910, have fallen into disrepair. The seminary announced several years ago that it would pursue a major renovation of the property, including improvements to its basic infrastructure, such as boilers, and upgrades that would increase accessibility for visitors with disabilities. However, seminary leaders were taken aback at the cost and extent of work needed.

"It was as if we spontaneously hit the expiration date and the facades and infrastructure of the buildings all began falling apart at once," said Serene Jones, current president of the seminary, in late 2018.

But, to pay for the lion's share of the project, the organization was able to partner with a development team made up of Lendlease and L+M Development Partners, each headquartered in the city.

The new tower was designed by Robert A. M. Stern Architects in Morningside Heights, with SLCE Architects in New York serving as the architect of record.

New York YIMBY noted on Aug. 2 that a significant amount of progress had occurred on the project's reinforced concrete superstructure since it last reported on the building in early February, when construction had just begun to go vertical.

The intricate façade on 3041 Broadway, YIMBY said, had risen above the podium levels and is gradually making its way up the sides of the tower. The dark-colored brick running bond patterns, stone-clad corners assembled with chamfered blocks, numerous Gothic style bay windows, thick window heads, and stone cornice lines appear to blend cohesively with the surrounding architecture of the seminary.

Previous renderings had shown 3041 Broadway clad in a warm-colored façade similar in appearance to Robert Stern's other notable New York designs like 30 Park Place and 220 Central Park South. YIMBY described the actual result, however, as being much more complementary to the neighborhood, giving Union Theological Seminary a modern take on historical style.

Some of the other anticipated features yet to be built are stacked corner balconies on the slimmer southern profile facing toward Midtown and a stepped crown.

The new building at 3041 Broadway is slated to be complete in December 2022, according to YIMBY.