New Rail Drawbridge in Jupiter, Fla., to Be Built as Part of $2.7B Brightline Expansion 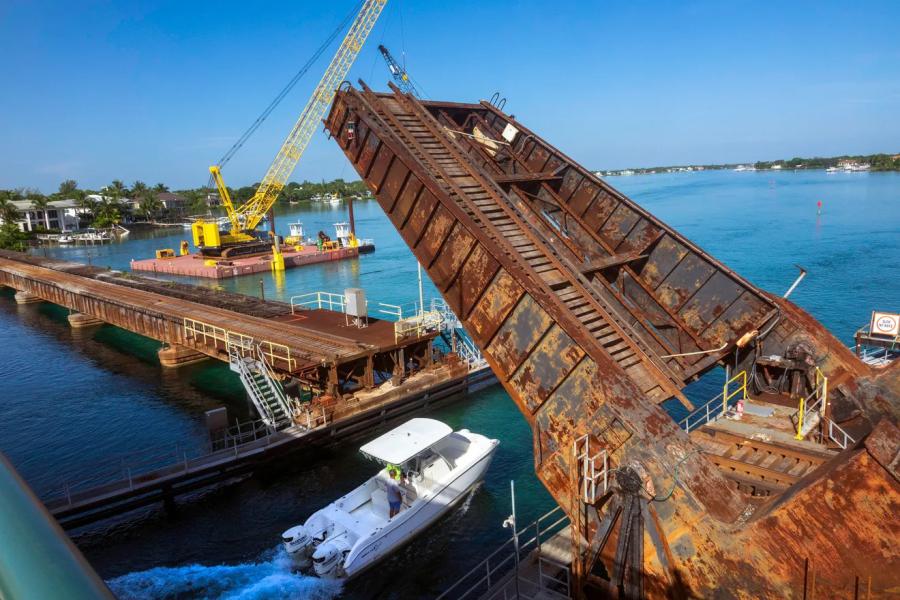 Work on the railroad tracks crossing the Loxahatchee River will force the train bridge to remain closed for long periods between April 10 and May 31, limiting boats from traveling freely between the river and the Jupiter Inlet and Intracoastal Waterway. (Lannis Waters/The Palm Beach Post photo)

A modern railroad drawbridge is planned to be erected soon spanning the Loxahatchee River in Jupiter, Fla., for Brightline, the company currently building a high-speed rail line to run between Miami and Orlando International Airport.

The drawbridge's construction is to begin April 10, and when work is finished on placing its components in late May, a critical piece of Brightline's $2.7 billion Orlando expansion will be completed, the company said in an April 5 press release.

The new structure will replace the current drawbridge, built in 1926, and provide improved reliability and efficiency to the crossing, which carries trains across a popular navigation channel in Palm Beach County.

As one of two movable bridge structures on Brightline's Orlando expansion project, the Jupiter drawbridge is a key connection between south Florida and central Florida.

Due to the type of construction work and necessary safety precautions, installation of the new drawbridge will require a temporary closure of the river channel, located just west of the Atlantic Ocean, and limiting boats from traveling freely between the river and the Jupiter Inlet and Intracoastal Waterway over a seven-week period in April and May.

In addition, Brightline also is rehabbing the entire 583-ft.-long Loxahatchee River bridge with full replacement of its electrical system and operating machinery as well as installing a second track.

Once the bridge is completed, boaters will see the benefits it is designed to provide, Brightline noted in its release, including improved dependability of bridge openings and closings, and added clearance for small watercraft. For instance, at its south end, the bridge is to get a new small-craft navigation span that will increase its vertical clearance by 14 ft. and allow more vessels to pass without the need to open the drawbridge.

"The Loxahatchee River bridge represents one of the more complex construction projects along our Orlando extension," explained Michael Cegelis, executive vice president of Rail Infrastructure and Development for Brightline. "Considerable work was required on the nearly 100-year-old structure to prepare it for high-speed passenger rail. This new structure is another important example of the significant investment Brightline is making to improve Florida's transportation infrastructure."

Scott Bridge Company, headquartered in Opelika, Ala., was selected as the contractor for the drawbridge replacement project.

Brightline's expansion of higher speed trains between Miami and Orlando will be finished by the end of 2022, the company told the Palm Beach Post, with passenger rail service projected to start in early 2023.

Bridge Components to Be Floated to Work Site

Building the new Loxahatchee River drawbridge will require multiple barges and cranes in the navigation channel, Brightline said in its release. Plans call for the structure's pieces to be loaded onto barges and floated into place, blocking the waterway from boat traffic.

At the beginning and end of the 52-day project, no boat traffic will be allowed to pass, and freight traffic will be briefly suspended. During the six-week work period in between, the temporary span for the railroad bridge will be lifted out twice daily to accommodate the busy waterway and let boats pass.