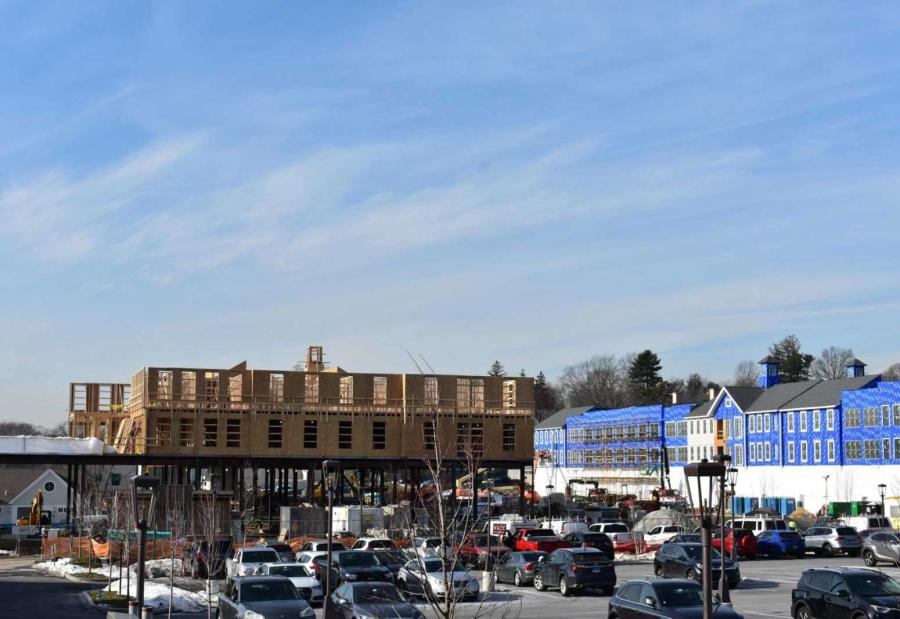 The two main buildings of Darien Crossing under construction in mid-January 2022 in Darien, Conn., with the development to include as many as two-dozen shops across from the Noroton stop of the Metro North commuter rail line. (Alexander Soule/Hearst Connecticut Media photo)

At the former site of a Stop & Shop opposite the Metro-North Noroton Heights station in Darien, Conn., a big new development is taking shape that will include several dining options popular with people on both ends of the commute in Connecticut and New York City.

Known as Darien Commons, the project is the largest retail plaza in years to be built adjacent to a station on the New Haven Line or any of its branches, CT Post reported Jan. 18.

Federal Realty Investment Trust is developing Darien Commons in advance of the massive Corbin District project that will reshape downtown a short distance away.

Farther up the line in Norwalk, Building & Land Technology is planning to follow up its new Curb apartment complex with the larger North Seven development, which would add several new buildings with ground-floor retail, extending north from the Merritt 7 station of the Danbury branch.

With Walgreens in place, along with an existing Equinox fitness club next door, approximately two dozen more stores and eateries will begin opening at Darien Commons starting this summer, on a staggered schedule extending into 2023. The complex is a short walk from Palmer's Market and an adjacent retail plaza that is slated for an overhaul.

The upper levels of Darien Commons are reserved for about 120 apartments split between one- and two-bedroom units, with rows of windows to flood interiors with light.

Patrick McMahon, senior vice president of regional development of Federal Realty, told CT Post that he anticipates the project's two-bedroom units likely topping $3,000 a month for 1,100 sq. ft. of space, along with extras like over-sized closets.

He noted, though, that the developer will not finalize its initial lease rates until this spring,

"In the two-bedroom units, there are larger kitchens than certainly what you would find in Stamford or Norwalk," McMahon explained. "It's important to somebody who's either got a small family or had a family that's left, and the kitchen was the center of activity."

The development includes a small "hotel" apartment that can be reserved by residents as guest quarters for out-of-town visitors. McMahon said he expects other developers will adopt the model for future projects.

Of the two main apartment buildings, one will have a big outdoor deck with common seating, fire pits and grills, flanked by two spacious patios that can be reserved for private use. The other building will include a plaza with plenty of seating and other amenities.

In addition, the complex includes an underground garage for residents and surface parking for people visiting Darien Commons to shop, dine or work out.