New Tutwiler Hall Rising at the University of Alabama 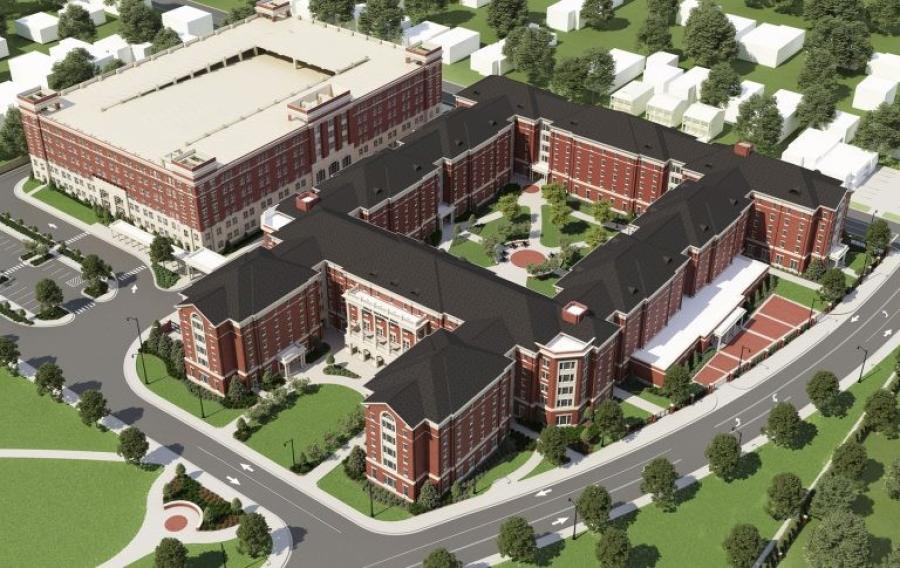 A rendering of the new Tutwiler Hall.

The new Julia Tutwiler Hall is rising on the campus of the University of Alabama at the corner of 12th Street and 10th Avenue.

The $145 million project will replace the existing Tutwiler Hall, which was constructed in 1968.

The new dorm building, which will house more than 1,200 female freshmen students, will have four wings surrounding a central courtyard. Julia's Market, currently located inside the existing Tutwiler Hall, will be relocated to the new building to provide food service to student residents.

The project, being built by general contractor B. L. Harbert LLC of Birmingham, will incorporate 1,284 beds in double-occupancy rooms. Each room will have a private bathroom and the facility also will house a fitness center. As with most new campus construction projects, a 16,600-sq.-ft. storm shelter will be built into the new structure.

Funding for the new dorm is coming from a variety of sources, including $110 million from general revenue bonds, $31.5 million from housing and residential communities reserve, $2.9 million from food service reserves and $475,000 from university reserves.

Construction is scheduled to finish in August 2022, when the old Tutwiler Hall is set to be demolished. The new Tutwiler Hall will be the third residence hall built on campus over the past century to honor Julia Tutwiler, who was a champion for education and prison reform in Alabama.

Tutwiler was the first female to serve as president of the Livingston State Normal School, which is now the University of West Alabama in Livingston. Through her advocacy efforts, 10 women gained admission to the University of Alabama in 1892, becoming the first women to attend the university in school history. Through her activities as an educator and advocate for women, Tutwiler earned the nickname "Mother of Co-Education" in Alabama.

Tutwiler is a member of the Alabama Women's Hall of Fame.