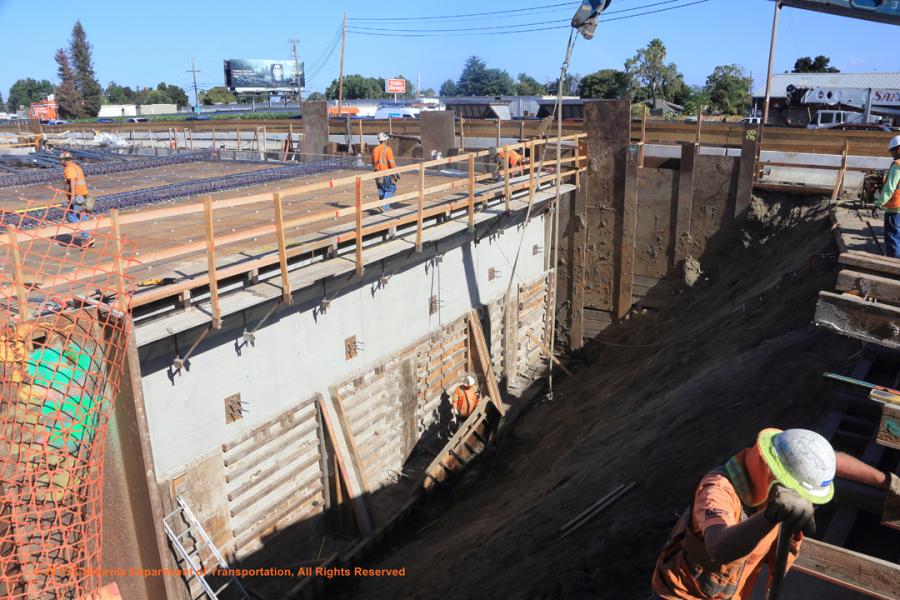 The creek water was rerouted to provide a dry creek bed during construction.

At the border of San Mateo County and Santa Clara County, Calif., the U.S.-101 bridge carries motorists over the San Francisquito Creek. Despite the Spanish translation — Little San Francisco — this creek roars to life during storms, causing significant damage in its wake. High floodwater levels along with structural deterioration prompted the California Department of Transportation (CALTRANS) to remove and replace the San Francisquito Creek Bridge. The project also will remove and replace the West Bayshore Road and East Bayshore Road bridges over the creek.

The U.S.-101 bridge over San Francisquito Creek was originally constructed in 1931 and widened in 1957 to include the frontage roads on either side of the freeway. Over the years, the bridge has deteriorated due to wear and tidal action. Based on structural inspections, a recommendation to replace the bridge was made in 2001 and reconfirmed in subsequent inspections.

The project vicinity has a history of flooding, with Route 101 and adjacent properties taking a hit during severe storms. Most recently, flood waters forced a temporary closure of Route 101 at this location in 1998 with the arrival of El Nino. The storms caused the creek to burst its banks; the resulting flood damage in the cities of Palo Alto, Menlo Park and East Palo Alto was estimated at $28 million. The creek's levees were also damaged.

The lengthy history of flooding along the banks of this tidal creek is due to its limited hydraulic capacity. Currently, the channel flow capacity is less than half of what is needed to accommodate a 100-year flood.

Work began in April 2015 and is expected to be complete in December 2017. Construction spans three seasons with most of the work taking place from June to October due to restricted work windows in the creek.

The joint venture between Ghilotti Bros Inc., of San Rafael, Calif., and RM Harris Co. Inc., of Martinez, Calif., was contracted at $15.2 million, well below the original estimate of $18 million. Additional services are being provided by Columbia Electric Inc., based in San Leandro, Calif.; Chrisp Company, headquartered in Fremont, Calif.; Foundations Constructors Inc., of Oakley, Calif.; and Silverado Contractors Inc., located in Oakland, Calif., among others.

Upon completion, the new U.S.-101 bridge will be 126 ft. (38.4 m) long and 244 ft. (74.4 m) wide and will carry five lanes of traffic in each direction. The main bridge, along with the frontage road bridges, requires 3,700 cu. yds. (2,829 cu m) of concrete. The new bridges will have less maintenance costs and provide protection from flooding. The frontage roads utilize the same reinforced concrete foundations, piers and wing walls as the San Francisquito Creek Bridge, and are considered to be part of the same structure. This project will not involve excavating the creek itself.

Robert Haus, CALTRANS public information branch chief, noted that despite the environmental challenges of working in and around a live creek, the job is running on schedule.

This project was developed through a partnership with the SFCJPA which includes the cities of Palo Alto, Menlo Park and East Palo Alto, the Santa Clara Valley Water District, the San Mateo County Flood Control District and CALTRANS. CEG