"We have people that can do construction using heavy equipment, and people who are plumbers, electricians, carpenters and other support elements that can help in a number of ways," Attard said. 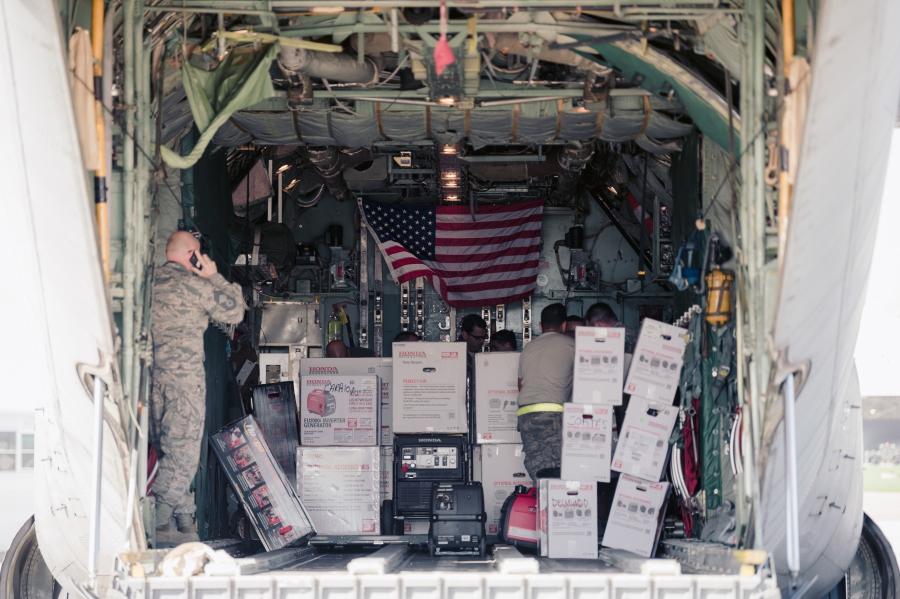 This cargo is going with 125 members of the 152nd Engineer Support Company, New York Army National Guard, to work on such things as debris removal and restore lines of communication to bring aid in the on going hurricane relief. (Photo Credit: Staff Sgt. Ryan Campbell)

The Buffalo, N.Y.-based engineers are prepared to conduct debris removal, clear roads and get lines of communication open, according to Capt. Nathan Attard, the company command.

"Things we might work on will include clearing roadways and removing obstructions and clearing debris," Attard said. "We are often called out based on the capabilities that we are known to have, in order to bring in people and equipment to take care of different situations."

The 152nd has dealt with snowstorms and floods in New York, Attard said.

"We are the same people who responded to the November snow storm that dumped seven feet of snow in Buffalo," said Attard. "We responded to Hurricane Sandy and other natural disaster type events around New York State."

The soldiers of the 152nd have a variety of skills and the unit has a variety of equipment that includes dump trucks, front loaders and excavators, Attard said.

The soldiers of the 152nd construct things like roads, airfields and helipads, so his men and woman actually trained in the skills Puerto Rico needs, Attard said. "Not only do we do this as Guardsmen but also a lot of us are professional construction workers," he added.

The company's heavy equipment was shipped from the Crowley Liner facility at Petty Island in Pennsauken, N.J., on Oct. 13.

"We have people that can do construction using heavy equipment, and people who are plumbers, electricians, carpenters and other support elements that can help in a number of ways," Attard said.

The New York National Guard has already deployed 60 soldiers from the 3rd Battalion 142nd Aviation and the 42nd Combat Aviation Brigade, along with four UH-60 Black Hawk helicopters and 132 members of the 442nd Military Police Company to Puerto Rico. The aviators are flying food and water delivery missions while the MPs are conducting security missions on two of Puerto Rico's offshore islands.

Capt. Mario Ibarra, a pilot in the Puerto Rico Air National Guard who flew some of the 152nd soldiers to Puerto Rico, warned the New Yorkers that the damage to his island was immense.

"I'd say to people it looks like a story from The Walking Dead," said Ibarra, a WC-130 pilot assigned to the 156th Airlift Wing at Muñiz Air National Guard Base. "All the houses damaged and trees that have fallen down, there's a lot of bridges down, a lot of people without electricity and even water. It's a sad scene."

Despite the struggles that the people of Puerto Rico are facing, they are staying positive and hopeful. They are coming together to restore their way of life, Ibarra emphasized.

"Most of them are in high sprits, everybody is trying to help each other," Ibarra said. "But it's already been a month and we almost in the same spot as a week after the hurricane. People were maybe not expecting everything to take so long. But all the agencies and the military are down they're helping out, including the National Guard from all different states."

According to Ibarra, almost 95 percent of residents still do not have power. While many major roadways were cleared, some of the more rural roads still remain blocked and with bridges down, some communities are almost isolated with helicopters being the only way in and out.

"A lot of people have to go out and walk. I've seen rope systems to bring water and food from one area to another because there are no bridges to cross the rivers," Ibarra said. "They say the power may take six months to get back online, others are saying a year or two years to get it back to where it was. A lot of things have changed, it's a different reality than before the hurricane hit."

The level of devastation that has happened has been something unlike most people has seen. While in Puerto Rico they expect the occasional harsh weather, the latest hurricanes have been unprecedented, he added.

"It's really hard, we are pretty used to hurricanes but nobody expected this," Ibarra said. "The last one I remember I was a little kid, the last one that hit pretty hard. It's a different generation now though, one that isn't used to being without technology so it's really hard for a lot of people."

The Soldiers of the 152nd ESC however are more that ready and willing to help fellow Americans. It is a daunting task, but one that they are up for, the Soldiers said.

"We are looking forward to helping the people of Puerto Rico as we have helped the people of New York," said Attard. "I don't think we have been in a situation quite like this where power and communications are almost completely down."

While New York has seen its share of tragedy and disaster due to weather, they know they are going to see something that they have never seen before he added.

"If you think about the things that have struck New York, they were bad but not anything like this," said Attard. "This is unique, we don't usually leave New York like this but there was a need for us."

Being able to bring this much experience is what Attard said put them at the top of the list when New York looked to see who could accomplish this mission. The relief that they are bringing will be invaluable.

"I really appreciate everyone that has come to our help," said Ibarra. "There's a lot of fellow Guard units in the Army and the Air Force that have come to our aid and calling us and asking us what we need and are helping out."