New York Runway Ready for Another 22 Years of Service 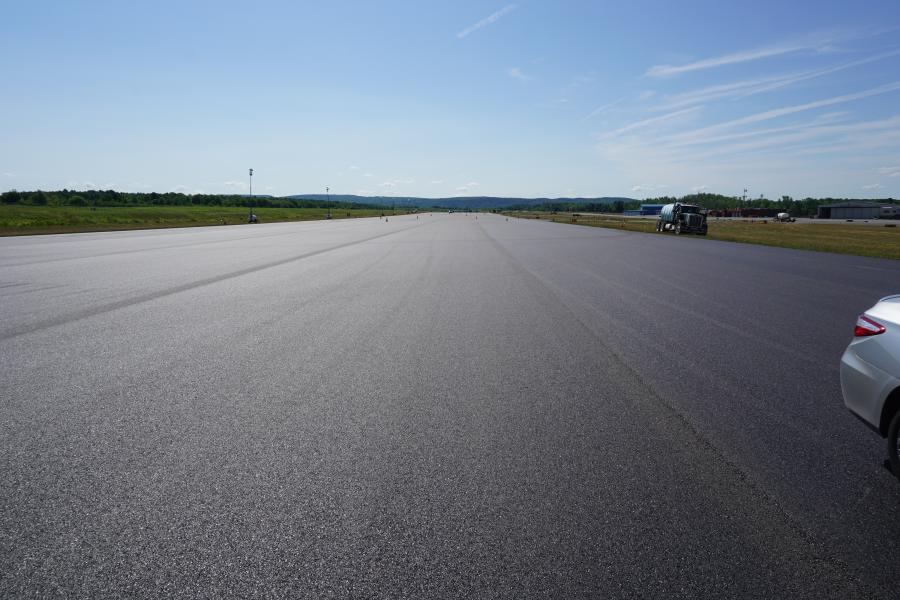 Ithaca-Tompkins is the main airport serving Cornell University, a global research and teaching institution; most visitors flying to and from Ithaca College and the Finger Lakes region also land and take off here. With a 6,977-ft. long by 150-ft. (2,126 by 45.7 m) runway, Ithaca-Tompkins is a well-planned, easy-to-access and very busy airport, accommodating major airlines including Delta, American and United.

“Our runway was 22 years old,” said airport manager, retired USAF Major General Mike Hall. “By the time they turn 18 or 20, even the best maintained runways need a total makeover.”

An important decision had to be made; either handling the paving project the traditional way, which is to work in stages and keep the airport partially functioning, or, shut down completely and do the rehab all at once. Hall has solid flying and management experience, and he believed that as long as they could count on the right partners, the results would justify choosing the total shutdown option.

“My staff and I spent some time getting buy-in from our customers,” said Hall, calling that step crucial, although not easy, “since to a commercial airline, a closed runway means lost business.”

The next important step was to develop a careful call for bids that included the very tight tolerances mandated by the Federal Aviation Administration, as well as Ithaca-Tompkins' management's own requirements. The tight specs make sense — the weight of a jet landing at Ithaca-Tompkins can reach 200,000 lbs. and the speed at which it lands is usually 150 miles an hour, magnifying even the tiniest bump. “Runways take an unbelievable pounding,” said Hall, “And so too do the plane's landing gear when a runway is not up to par.”

With a thorough, comprehensive proposal backed by a strong reputation in the business, regional construction and paving company Suit-Kote won the bid for the project. A privately-owned, vertically integrated firm founded in 1921, Suit-Kote is an engineering and road construction company with headquarters in Cortland, N.Y. and 15 facilities across the region. Its divisions currently include construction sales, asphalt, laboratory and operations. Frank Suits Jr., a third-generation family member, is chairman of the board, CEO and president, while his brother Paul is vice president. With more than 750 employees, the company is proud of its values, their commitment to research and development and an inclusive approach to management that it believes is the reason behind its very low turnover ratio — barely one percent.

Some time before the Ithaca-Tompkins bid came out, Frank Suits Jr. had read an article about the successful use of 3D paving at a runway makeover project. To Suits, a CEO who's always interested in keeping up with the latest advances, the concept seemed to be in perfect alignment with the challenge they were facing — a tight deadline, demanding specifications and high visibility. The write-up mentioned SITECH Northeast, the upstate New York Trimble distributor, and Suit-Kote Construction Supervisor Timothy Carr contacted the company at its Syracuse headquarters.

According to Carr, there were two main points he wanted to cover with SITECH Northeast's manager, Mike Jouben; the tight tolerances of the runway repaving project, ¼ in. (.6 cm), and the equally tight deadline, 14 days from start to finish. Jouben and his staff analyzed the project, and based on their experience and knowledge, they developed a plan for helping Suit-Kote efficiently meet the demanding specs of the airport job. The package encompassed the components of the Trimble 3D technology that were needed for the paving project, plus training and support for the Suit-Kote crew, provided throughout the project by SITECH Northeast specialists Kyle Easton and Jason Schlabach.

A Closer Look at the

Use of 3D Paving

Trimble asphalt 3D paving technology addresses the main concerns faced by paving contractors — increased competition; tight specs; demanding deadlines; high material cost and reduced profitability — augmented in this particular case by the stringent specifications inherent to a runway repaving job. And Jason Schlabach added — “3D technology means there's no need to use string lines, so you eliminate the cost, wasted time and problems associated with that method, such as trucks having to maneuver to avoid hitting the string lines.”

For the Ithaca-Tompkins project, SITECH Northeast equipped Suit-Kote with the Trimble PCS900 paving control system — which automatically guides the screed to lay exactly the right material thickness and slope –— and multiple universal total stations (UTS) provided full three-dimensional control of the screed. As Kyle Easton explained, with accurate 3D control of your screed, you can meet smoothness and accuracy specs while not using excessive amounts of asphalt.

Easton said that in this particular case, they used four Trimble SPS930 universal total stations to run the paver, and Schlabach said — “The crew was attempting 1,000 or more feet of coverage on the paver before making the next pass; having more robots available allowed us to control the passes without 'leapfrogging' the guns.” The result? Providing one continuous surface, which was essential for the smooth ride that had been specified.

Other components were a Trimble MT900 machine target (PCS900), to track the paver; two Trimble CB440 control boxes (PCS400), on the paver, “one for each side of the screed, so no matter which side of the screed you were on, you could operate it,” added Schlabach. In addition, a Trimble CB460 control box (PCS900), delivered the mathematical data to the crew so that they could ensure the mat they were leaving behind was correct. Suit-Kote was using its 25 ft. (7.6 m) Cat AP1000 paver, so six passes of 25 ft. each were needed to pave the 150 ft. (45.7 m) wide runway.

When asked for their opinion about the 3D paving technology and about the cooperation between Suit-Kote and SITECH Northeast, each stakeholder in the Ithaca-Tompkins runway paving job has their own point of view. And they are all important.

Hall is the customer, and he simply says, “Seems to me to be the best paving job ever.” The retired major general states that he has no concerns; he's just impressed.

“I saw GPS for the first time in the early 90's when I was in the Gulf war — I am thrilled to see its use extended to the paving business, and becoming an integral part of aviation on the ground.”

Paul Suits, Suit–Kote VP, calls automation “An amazing solution,” and plans to use it in the future. Suits appreciated very much how the SITECH Northeast crew was always available and easy to access, and was impressed by the visitors from Trimble who also came over to check the job.

Benjamin Johnson, of C&S Companies engineering firm, the Syracuse, N.Y., company that specializes in airports and was a consultant in this job, said that he's an advocate for automation, and agrees that the super tight tolerances on this type of job make the use of technology very attractive — “Smoothness tests were good,” and he added that using string lines, the traditional method, is very time consuming.

“We meet surface tolerances every night within a 1/8 in. variance; we hit ride checks for dips and bumps every time.”

Not only did Suit-Kote meet the project's tight specs and the very aggressive schedule — they finished one day ahead, with plenty of time for the first officially scheduled commercial flight to land at the perfectly re-paved runway the next morning. All that hard work and all that smart thinking paid off. Suit-Kote can move to its next project leaving behind some seriously satisfied customers.