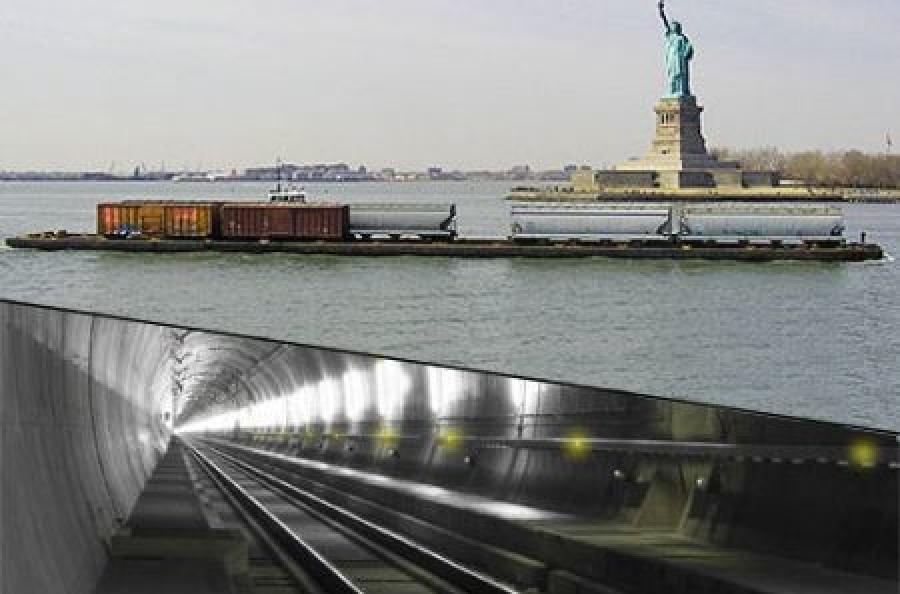 The image at top shows the existing railcar float system, below is a rendering of what a cross harbor rail tunnel could look like. (PANYNJ and State of New York photo)

The Port Authority announced that it has awarded an agreement to a consultant for the second phase of an environmental review for the Cross Harbor Freight Movement Program. The review, expected to take up to three years, will perform a more detailed analysis of the environmental effects and potential mitigation measures for two preferred alternatives identified in the prior Tier 1 study to move freight across New York Harbor.

Under the $23.7 million agreement, Cross Harbor Partners, a joint venture of STV Incorporated/AKRF Inc., will undertake the Tier II Environmental Impact Statement, which will closely examine two preferred options — the construction of a cross harbor freight tunnel and the expansion of the Port Authority's existing railcar float operation. The rail tunnel alternative calls for construction of a freight tunnel under the New York Harbor that would run approximately 4 mi. from Jersey City, N.J., to Brooklyn, N.Y. The railcar float alternative would greatly expand the existing carfloat system, currently operated by New York New Jersey Rail LLC, a wholly owned entity of the Port Authority since 2008, and would include new transfer bridges, carfloats, locomotives and tracks.

The review, which will include extensive outreach to all stakeholders, including elected officials and the public, will provide the Port Authority and other regional agencies with cost and benefits of each alternative to help reduce roadway congestion attributed to goods movement across the New York/New Jersey Harbor.

“We need to explore potential solutions now to improve mobility and reduce the region's reliance on trucks to move goods critical to regional economic growth,” said Kevin O'Toole, Port Authority chairman. “This initiative will take a close look at two alternatives that could help achieve that goal in the future.”

“With a projected 40 percent increase in freight movement by 2035, delays in goods movement will only worsen unless we begin to develop an optimum plan now that will provide the shipping and distribution industry with attractive alternatives to shipping by truck,” said Rick Cotton, Port Authority executive director. “Our goal is to explore these alternatives and come up with cost-effective approaches to future freight movement.”

“New York City is the only major city in the world not directly connected to its country's national freight rail network — and that is something we must address,” said Congressman Jerrold Nadler (D-NY). “For too long, New York City and the entire metropolitan region has had an over-reliance on trucks — clogging our roadways, making consumer goods more expensive and raising the cost of doing business, harming our environment, endangering our health, and creating real safety and national security vulnerabilities. Without this key rail link, more than one billion tons of freight move through the greater New York region each year primarily by truck, with truck congestion adding an estimated $2.5 billion annually to the cost of delivering goods to consumers and businesses. With the start of the Tier II EIS, which will engage in a deeper examination of a cross-harbor freight tunnel identified as necessary in Tier I, we are taking a major step forward to finally address the region's serious and growing problems with inefficient goods movement.”

The Tier II study will help Port Authority leadership determine if one or both alternatives provide sufficient benefits to justify their costs. The recommended alternative or alternatives would require additional funding for the next phase of development, which entails preliminary engineering.