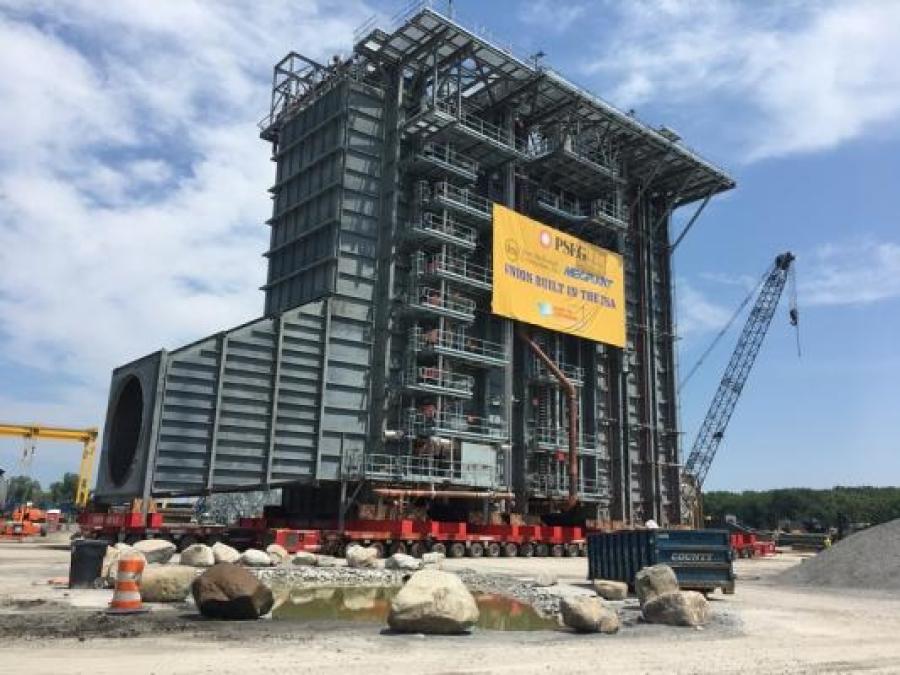 Parts for the HRSG were initially shipped to the port in November 2016, and since then, workers have been assembling the structure 24 hours a day, six days a week, according to Port of Coeymans General Manager Richard Robinson.(Photo Credit: Melanie Lekocevic).

The Port of Coeymans is scheduled to move an 8-million-pound heating structure from the port onto a barge Aug. 2, as it readies for transport south on the Hudson River on its way to New Jersey.

It is the largest project of its kind ever in the United States.

The structure is an HRSG — or Heat Recovery Steam Generator — that is being readied for transport to a power plant in Sewaren, New Jersey.

Parts for the HRSG were initially shipped to the port in November 2016, and since then, workers have been assembling the structure 24 hours a day, six days a week, according to Port of Coeymans General Manager Richard Robinson.

The HRSG was assembled at the port by Durr Mechanical/Megrant Joint Venture, which began work in November, and on Tuesday was scheduled to be transferred onto the barge by the Dutch company Mammoet.

“The build-out is being done at the Port of Coeymans, and it's being shipped to Sewaren, New Jersey, to be used at a power plant,” Robinson said.

How do you move a structure that weighs 4,000 tons onto a barge? The HRSG is seated on 138 hydraulic axles “that will lift the entire unit hydraulically,” Robinson said.

It will then be moved onto a Marmac 400 barge that is 100 feet wide and 400 feet long, where it will be “lashed down” by being welded onto the deck, and then pulled by three tugboats down the Hudson River. The transport to New Jersey is expected to take 24 hours and will leave Coeymans on Aug. 7.

The trip down the Hudson River will head south toward New Jersey. The first bridge it will pass will be the Rip Van Winkle Bridge — the unit and barge will be 126 feet tall, and clearance under the Rip Van Winkle is 145 feet. But a few miles down the river at the Mid Hudson Bridge, clearance beneath the bridge is 135 feet — with just nine feet to spare.

Once it arrives at its destination, the HRSG will be cut from its lashing and moved off the bow of the barge.

This is the first time a project of this nature and size has been done in the United States.

“No HRSG of this size has been built off-site and then transported,” said Michael Dock, project superintendent for Durr Mechanical. “This is the first of its size.”

Port of Coeymans owner Carver Laraway pointed to the jobs that have been created at the port.

“The Port of Coeymans is home to nearly 500 employees, both union and nonunion,” Laraway said. “Through a true team effort between Durr Megrant Joint Venture and Carver Companies, this project, like many others completed at the Port of Coeymans, illustrates that we are open for business in New York state and look forward to the next project.”

The HRSG is just one component of the power plant project. The same contractors have also been assembling a total of 20 ACCs – Air Cooled Condensers – weighing between 210,000 and 420,000 pounds each.

The first set of ACCs was moved from the Port of Coeymans to New Jersey in late June, where they are being installed at the same power plant. The next set of ACCs is being transported by barge on Aug. 10, with the final set going about a week later.

Coeymans Marine Towing, based at the Port of Coeymans, is in charge of the tugboats and transporting the units down the river safely to New Jersey.

State Sen. George Amedore Jr. said the project is indicative of the kind of economic vitality the Port of Coeymans is facilitating in the region.

“It is great to see the Port of Coeymans playing such an important role in commerce throughout New York state,” Amedore said. “This Heat Recovery Steam Generator module was built and shipped right here in the 46th Senate District. This project displays the innovation and economic viability that upstate New York is capable of. I want to congratulate all of those involved on a job well done.”

To view video footage of the barge making its way down the Hudson River, click here.