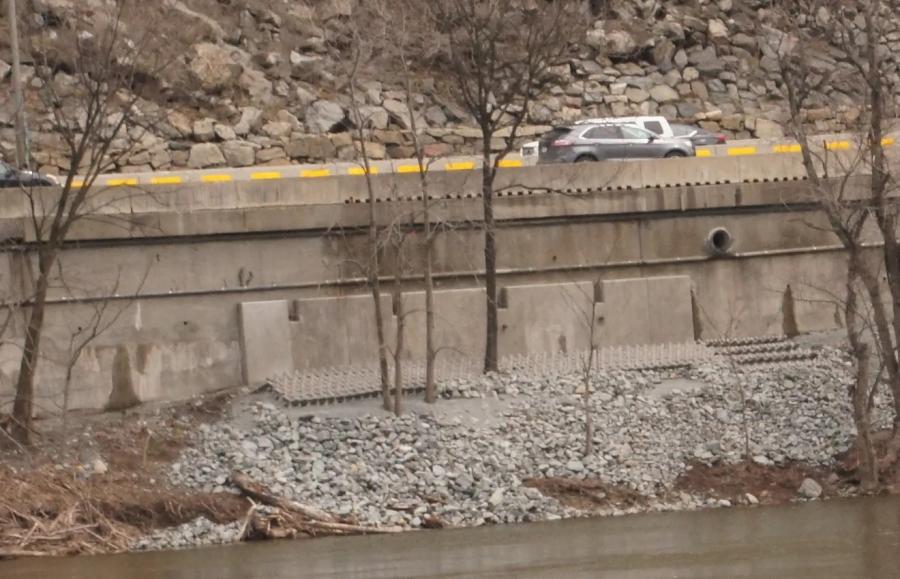 This file photo from March 2022 shows the "erosion cave" repairs made to the retaining wall on I80 in the Delaware Water Gap. (Bruce A. Scruton/New Jersey Herald photo)

A project to study damage to a retaining wall that supports a raised section of Interstate 80 near the Delaware Water Gap, was approved recently by a New Jersey Department of Transportation (NJDOT) internal committee.

The New Jersey Herald reported April 22 that according to the meeting's agenda, the wall may be "subject to sudden failure."

The news source also noted that the NJDOT committee will receive $5.5 million in state funds that it requested to inspect the wall and produce solutions to address the problem, which includes the deterioration of the wall and a minimum 12-in.-deep crack.

The estimated cost of the repairs to the wall's crack and deterioration stands at $51 million.

The "failure" warning was included in the project description, which also stated the retaining wall "does not meet current serviceability requirements due to its minimal reinforcement," and that a failure "is a risk to the traveling public and could result in a closure of I-80."

The retaining wall stretches for more than a quarter mile around the base of 1,526-ft.-tall Mt. Tammany in an area of I-80 known for its S-curves, which were built in the 1950s.

NJDOT's engineering study will examine the retaining wall issues that were discovered by crews making repairs to a nearby section of the wall that had been scoured or eroded by water coming down from the mountain, located on the New Jersey side of the Delaware Water Gap and maintained by the state agency.

The Time is Now to Make Repairs

According to a transportation agency memo, "Upon clearing vegetation west of this wall repair, additional wall deterioration, with a minimum 12-in.-deep crack adjacent to the wall shear key, was observed."

The NJDOT memo also stated that the wall "does not meet current serviceability requirements due to its minimal reinforcement. Due to the tied-back construction of the existing wall, it could be subject to sudden failure, which is a risk to the traveling public and could result in a closure of I-80."

The Herald reported that a video taken in 2020 by area residents, as part of their effort to draw attention to the "erosion cave" and other problems with the 75-year-old road and wall, shows the crack was present at that time.

When the wall was constructed, a drainage system was included that would collect and control the water flowing off the mountain to channel it into the river.

However, breaks and cracks in that system of mostly concrete pipes allowed water to seep into the fill. Seeking a path to the river, water pushed down to the bottom of the wall and completely eroded parts of it, the Herald noted.

The news service brought in a retired civil engineer to examine the information that the engineering study will include. Afterward, the engineer, who asked that his name not be published, said he thinks the water has built up behind the wall, creating more pressure on the structure. He added that the concrete, like a piece of chalk, can take a lot of pressure, but is also "brittle" and can break without warning.

As part of the recent repair project, the contractor drilled a series of "weep holes" in the retaining wall. Those holes are attached to perforated piping and provide a route for trapped water to flow through the wall to reduce the pressure.

"However, that's just a temporary measure," the engineer told the Herald. "It's a sign that there's water back there."

The engineer also believes a minimal amount of steel was used in building the retaining wall and in anchoring it to the base of the mountain.

The NJDOT study is needed since the structure is nearing the end of its useful life and was built to standards from 70 years ago, explained the engineer. He added that he does not think there is an immediate danger to the public, but a full inspection must be done soon.