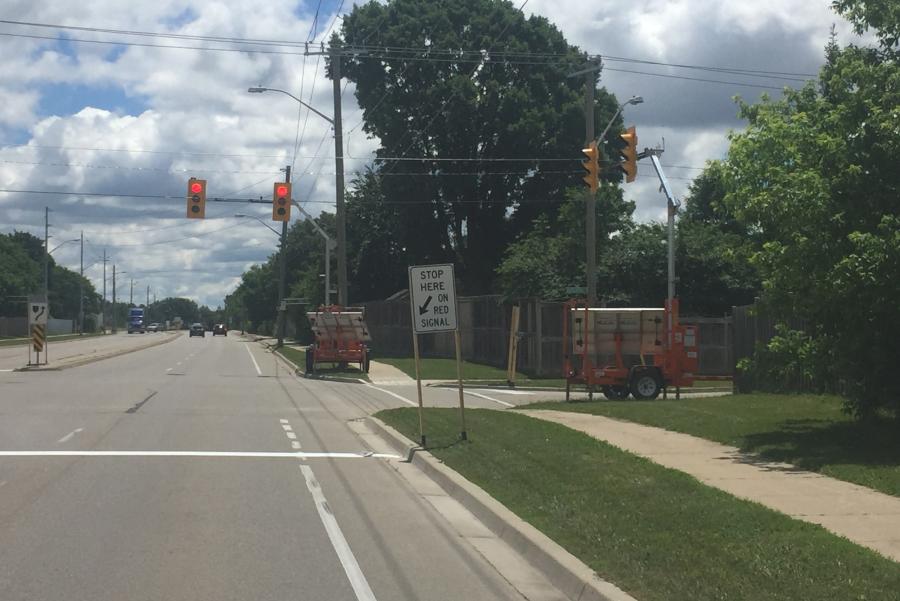 “Once these units are set up and programmed, you just leave them alone,” said Stickney.

He may not directly hear or see them, but Dave Stickney fully understands that his arrival at a bridge or intersection is bound to elicit muttered words and the rolling of the eyes.

Seeing him begin to set up portable traffic signals can only mean one thing to local residents: Weeks, if not months, of delays for their daily commutes. Seeing Stickney in action, the motorists instantly realize the bridge or road ahead is going to be down to one lane while the necessary upgrades are painstakingly completed.

But to one expanding neighborhood in the southern Ontario city of Waterloo, Stickney was the proverbial Santa Claus this year. He showed up with two sets of North America Traffic's PTL 2.4x double-head traffic lights and quickly became the toast of the town.

“Every few minutes when we were there setting up the units, somebody was coming up and thanking us,”Stickney said. “They'd roll down their windows, stop and tell us, 'It's about time somebody put lights here.' They were actually quite happy to see us!”

As the Traffic Control Specialist with Sunbelt Rentals, a proud owner of CRS (Contractors Rental Supply), Stickney is kept busy driving all over the vast province of Ontario. In just two years of installing North America Traffic's extended run-time and daily setup portable traffic signals, he's seen it all.

Based at the Sunbelt/CRS branch in the adjacent city of Kitchener, he was well aware of the tricky situation faced by the residents in the burgeoning city of Waterloo. An infrastructure construction project for an expanded subdivision resulted in one of two entry points for Woolwich Street being shut off. This forced all residents and visitors of the neighborhood to enter and exit at the Woolwich intersection with busy University Avenue, where there are no permanent traffic lights.

“That made traffic an absolute nightmare there,” said Stickney. “Everybody had to come out of Woolwich Street at that one spot to get across or on to University Avenue and, with University Avenue being one of the major arteries in Waterloo, it created a potentially dangerous situation for motorists. When you have two ways of getting out and, then all of a sudden, you eliminate one, it creates a major traffic challenge.”

With input from the local municipality overseeing the project, the contractor Sierra Infrastructure reached out to Stickney after deciding temporary traffic signals at the intersection would control the traffic, “and it did,” said Stickney. “The local residents were very happy with what went on there.”

Instead of having to spend five or more minutes carefully trying to weave their way onto or across University Avenue, the Woolwich Street commuters benefited from the microwave detection technology of the solar-charged, battery-powered North America Traffic PTL 2.4x system.

“The microwave detection would sense them, turn the lights red on University, and give them the green to go,” said Stickney, who correspondingly had the lights on busy, four-lane University Avenue set to otherwise stay set on green to keep traffic flowing. This system and setup, he said, provided the best balance between busy arterial traffic flow and local residential needs.

While positive feedback from local commuters may be novel to Stickney, it is quite familiar from his many repeat customers who use the North America Traffic products. They remark on the ease of setup, ease of use and, most importantly, their reliability. “In fact, I haven't had any complaints from any of the customers I have dealt with,” said Stickney. The contractor on this project, Sierra, is among his repeat customers.

“Once these units are set up and programmed, you just leave them alone.”