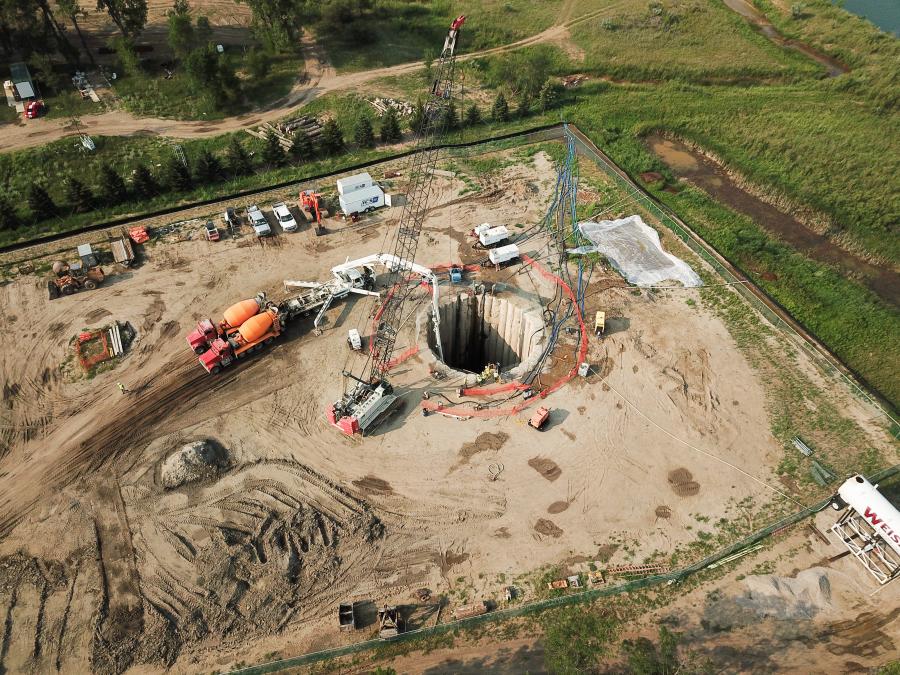 The $1.2 billion Red River Valley Water Supply Project finally has pipe in the ground and both intake and discharge facilities under construction.

A plan to move water from western North Dakota to water-starved areas in the eastern part of the state is a long and winding dream dating clear back to the 1940s. In reality, the project's tortuous history is a consequence of mis-starts, mistrust and Missouri River politics.

The good news is the Red River Valley Water Supply Project finally has pipe in the ground and both intake and discharge facilities under construction. The $1.2 billion water transfer undertaking even has an end date in sight, albeit possibly a decade away. To long-suffering advocates of the project, it feels like the home stretch.

Groundbreaking for the first mile and a quarter of what will be a 165-mi. pipeline occurred in early August when contractor Garney Construction carefully laid the first 72-in.-diameter spiral-wound, concrete-lined, polyurethane-coated pipe in ground just south of Carrington in central North Dakota. This initial open-cut pipe-laying work also features tunneling under a highway and a set of railroad tracks. That first mile-plus of pipeline will cost $8.3 million dollars. Engineers will bury the entire length of the pipeline 7 ft. deep to escape freezing temperatures.

At the eastern terminus of the pipeline, Industrial Builders Inc. has completed its $1.5 million contract for a discharge facility to release the piped water in a non-erosive way into the Sheyenne River. Meanwhile, on the far west end of the project, another contractor, ICS Inc., is wrapping up construction of an intake wet well to draw water from the Missouri River, a nearly $5 million undertaking. Yet another contractor, Michels Corps., is preparing to bore a tunnel leading from the river to the wet well, with completion expected by September 2022. 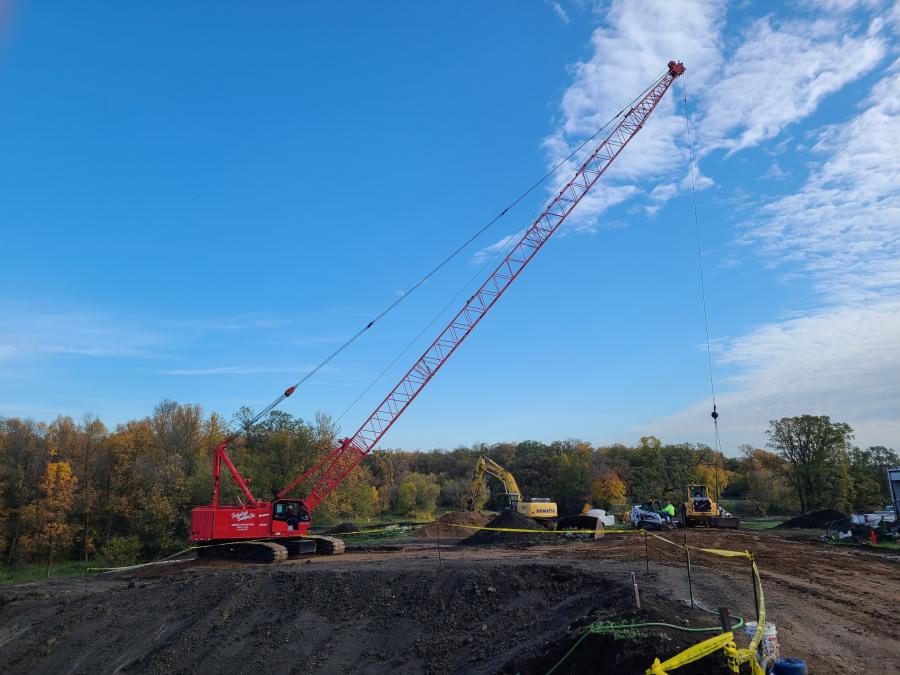 Bidders on the pipeline contract were all from out of state, according to the project's general manager, Duane DeKrey, "because no one in North Dakota was big enough to handle the project. They told us they look at it like more of a dirt-moving project than pipe-laying. Alkaline dirt has to be hauled out and sand and gravel hauled in and put around the pipe."

The pipe-laying contractor hopes to lay about 250 ft. of pipe a day. That schedule will be influenced by the northern clime in which the work is being done and vagaries of the weather.

"Last winter, a contractor might have been shut down for a month," DeKrey said. "But normally, in December through March, not much happens around here."

A pertinent fact is that the pipe-laying kickoff near Carrington occurred in what was described as a "drought-parched field." North Dakota is a plains state with average precipitation of just 16 to 22 in. a year depending on location. This year, the entire state has been experiencing moderate to extreme drought conditions.

Lakes, streams and ponds around the state are said to be alarmingly low.

"Before we finally got some rain, Fargo had only a year and a half of water storage," said the project manager. "We're still in a drought. We'll see what kind of snowfall we get this winter."

The pipeline project is all about dry spells. It will create infrastructure to mitigate the worst effects of grievous droughts in the future such as the one that struck North Dakota in the 1930s. The huge engineering undertaking also might be characterized as a tale of two rivers — the mighty Missouri River in the western part of the state and the Red River in the east.

From its headwaters in the mountains of Montana and Wyoming, the Missouri runs 390 mi. southward through North Dakota, in and out of U.S. Corps of Engineers dammed water areas, its basin draining almost half of the state's land mass. On the east, the Red River flows northward along its border with Minnesota and empties into Lake Winnipeg in Manitoba, Canada.

Whereas the flow of the Missouri River year in, year out is dependably about 25,000 cu. ft. a second, the Red River is far less reliable. During the 1930s drought, in fact, North Dakotans could walk across it without getting their feet muddy. This explains why, in the 1950s, planning began for a project to transfer water from one basin to the other.

The initial idea actually had roots in a federal flood control initiative for the Missouri River proposed in the mid-1940s. It was merged with another idea for a network of canals for irrigating farmland. Unfortunately, the resulting amalgam of plans never enjoyed a critical mass of support, not even from farmers who viewed it as impractical and costly. The cost of the project over 60 years was estimated in 1957 to be more than $500 million and would only serve five percent of the state's crop land.

The next initiative — called the Garrison Diversion Unit Act — came in 1958 and featured a 74-mi. canal to carry water from the Missouri. The so-called McClusky Canal eventually was built but only the first 59 mi. on the west side of the Continental Divide were used, the other 15 mi. remaining a well-engineered ditch descending the east side of the Divide. The first 59 mi. were underutilized for many years because the federal government would only guarantee a year's worth of water. Without longer-term guarantees of H20, would-be partners along the canal declined to make the capital investment to use the water. 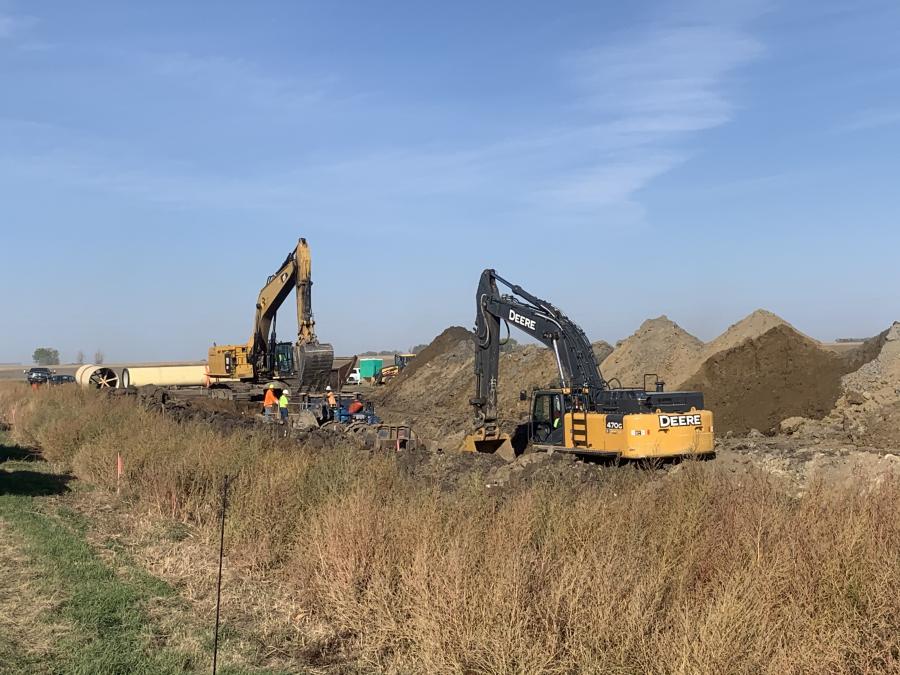 A final iteration of the Garrison project in 2000 featured a $200 million federal loan for the Red River Valley Water Supply Project. Washington spent $18 million up front on preliminary studies and reports, but when the deal eventually was submitted to the U.S. Interior Department for approval, proponents of the project once again were disappointed: The proposal died.

That failure of Washington to advance the project was a final straw for North Dakota political and civic leaders, who resolved to move the project in-house. Hence, the Red River Valley Water Supply Project is wholly state-owned.

The project combines some elements of the previous canal undertaking with a 72-in. pipeline. While the water will normally be pumped directly from the Missouri, as an alternate source some 165 cfs (cubic feet per second) of water can be pulled from the aforementioned canal for dispersal among municipal, rural and industrial users. As a cost-saving measure, the sponsoring Garrison Diversion Conservancy District sought federal approval for the alternate canal draw. The granted permission will save millions in construction and operating costs.

Some of the canal water will stay in the Missouri River basin, some will be sent farther east to the tributary of the Sheyenne River that feeds the Red River. At this point, project sponsors are looking for final commitments from numerous parties that evinced preliminary interest in the project — ranging from small rural water systems to the city of Fargo system. According to DeKrey, 84 percent of the water will flow to Fargo, rural Cass County and the Grand Forks and East Grand Forks, Minn., urban area. Investment by the water systems will bring a payoff of sufficient water for drought mitigation and, in non-drought years, for routine utilization to enhance economic development.

Before DeKrey became the project's general manager seven years ago, he was well aware of the long-running project. He farmed and ranched in the state for 30 years, had been a state legislator who dealt with water and natural resources and, at the time of his appointment, was a deputy director of the North Dakota Game and Fish Department.

Even more familiar with the project is the deputy program manager, Kip Kovar, another native North Dakotan. The civil engineer signed on as assistant district engineer of the Garrison Diversion Conservancy District 20 years ago, becoming district engineer in 2010. Besides his project involvement, Kovar manages the district's operations and maintenance program and its 25 staff members.

One of the engineering features of the pipeline is a break tank at a point near the Continental Divide. Water to the west is pumped; to the east, the liquid flows by gravity. Kovar explained the hydraulics of the tank and its necessity to the system this way:

"It will ensure that a surge from starting or stopping flow and from power outages will not damage the main distribution system. If sized properly, the tank will keep the system full in power outages and not allow air to enter the system. So, starting the system after a loss of power will be seamless."

One benefit of the tank is smaller horsepower requirements to pump the water. And its cost? $10 million. 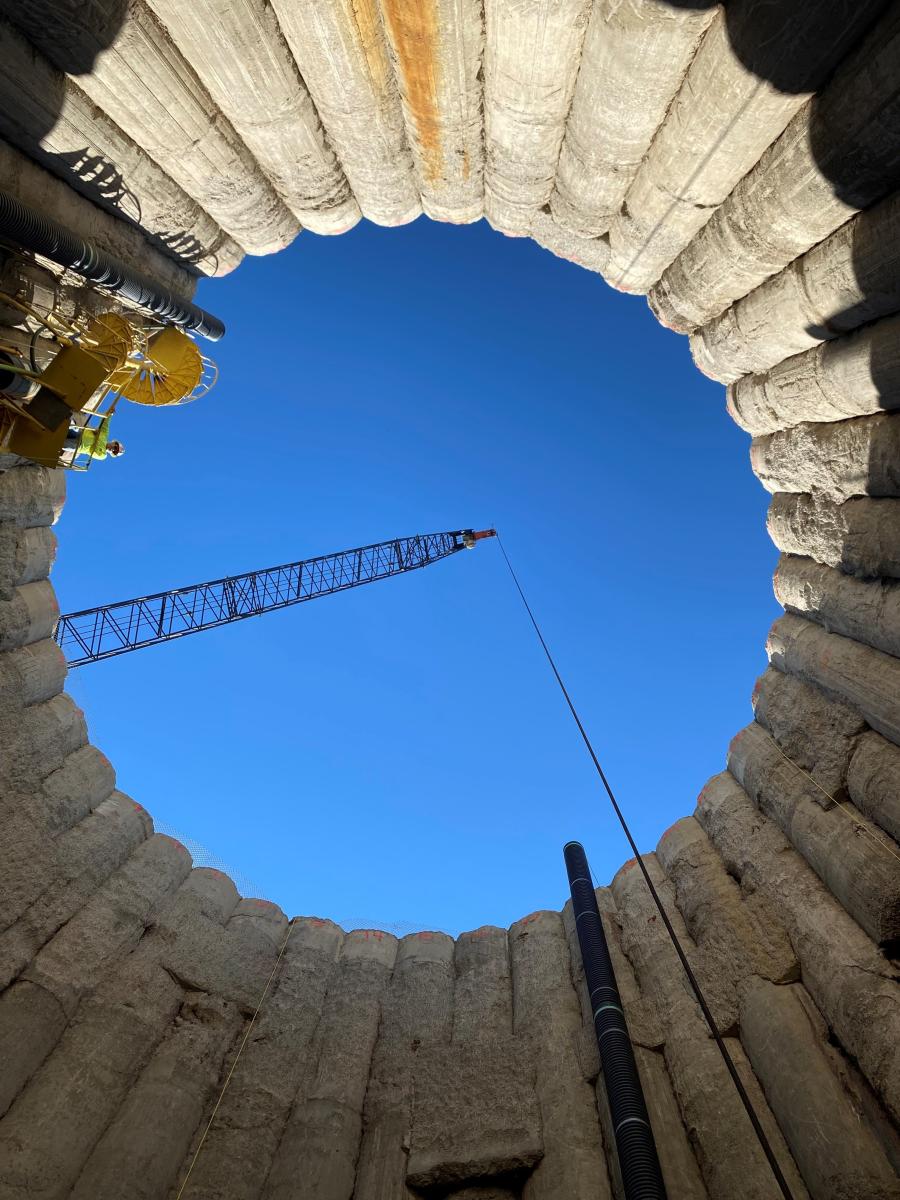 The project leaders have seen hiccups during their tenure, including political interventions by states lower on the continent through which the Missouri River flows on its way to its merger with the Mississippi River. In late August, a court denied the most recent legal challenge by the state of Missouri.

"The fact is, the natural flow of the Missouri River is about 25,000 cubic feet per second. Our pipe is going to take away 165 cubic feet a second," DeKrey said of the state of Missouri's complaint. "We use the comparison of taking a thimbleful from a five-gallon bucket of water."

Canadian authorities also have challenged some aspects of the project because project water will cross the Continental Divide into the Hudson Bay basin. Below the border, federal challenges have been registered as well. While the Bureau of Reclamation has made several environmental commitments to the project, Red River Project officials nonetheless have experienced resistance.

At one point, Washington insisted that the piped water be treated to drinking water stands even though the treated water was going to be released into a river at the eastern terminus of the pipe. The demand finally was dropped. Kovar said being able to perform "simple treatment" of the water versus a more complex treatment saved the project $150 million.

The route of the east-west pipeline also partly reflects the tension between federal and state jurisdictions. The chosen path will roughly follow state Highway 200. An alternate route would have paralleled Interstate 94, but more wetlands would have been encountered along the way.

"Our pipe is not so straight," DeKrey said, "because we go around every wetland and grassland easement to avoid touching anything with possible federal government jurisdiction. We call it our ‘squiggly pipe.' Having to do that added about 10 percent more to the cost."

He was asked what the chances are that federal regulators and environmentalists still might find the equivalent of a snail darter or something and block construction.

"We've talked about that and believe we've done everything we can to manage risk and alleviate the concern."

When the projected 165-cfs flow is running in the functioning pipeline, the pipe will be pretty much engorged with water. At a minimum, the flow will be 4 cfs to keep water in the line from becoming stagnant. Yet the pipe is years away from getting wet.

The 6-to-10-year timeframe for construction is optimal, according to DeKrey. Anything much shorter will stress production of the pipe by its manufacturers. Anything longer is likely to inflate the cost.

"The legislature might try to figure out how to speed up the project a little."

For now, the intake construction work continues unabated, planning for construction of the break tank and treatment plant is ongoing and the first few miles of pipe are being laid.

"This month, we're going to bid out another nine miles of pipe," said DeKrey.

The pipeline slowly is becoming a reality. CEG