The Northeast Club is a chapter of the national Historical Construction Equipment Association, representing the six New England states. 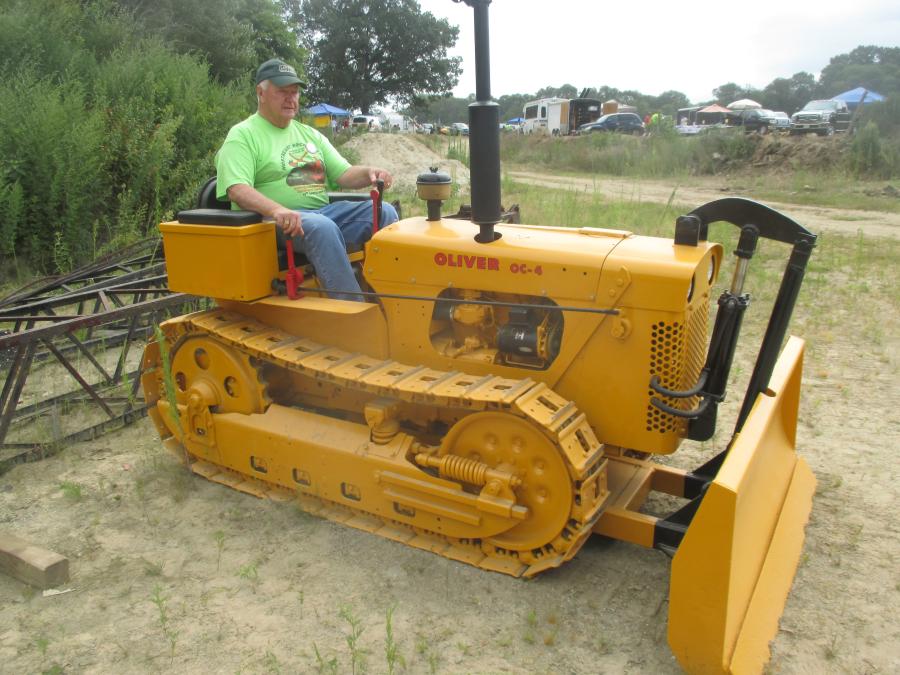 Kevin Maguire, North East Rockbusters chapter president, sits atop the 1959 Oliver OC-4 he restored as part of the vintage machinery on hand.

In a perfect bit of synchronicity, the vintage tractors, dozers and earthmovers strutted their stuff on a vintage farm that needed its land dug out and moved around.

Filling the vast acreage of Mark Gluck's Farm at 159 Packerville Road in Plainfield, Conn., the Northeast Rockbusters lived up to their name Aug. 5 to 7 with a great show and display of antique construction equipment.

“I first went to their national show held in Washington County, Rhode Island. Then, I went to a meeting,” said Gluck. “They said they needed to have a spot to have a show. I thought it would be a great thing to do. There is a lot of work to do here and you can leave machines here to do it. Plus, that would be a big help to me.”

Maguire said it isn't easy finding the right open areas to host his six regional events each year. “It's hard to get places to do it and Mark Gluck has over 100 acres here,” said Maguire. “He volunteered this area. This is our second year here.”

Maguire said that after the August show, his shows will likely return to Wilton, N.H., and Rhode Island for future events.

NE Rockbusters, one of 17 chapters in the H.C.E.A., has 400 active members and tries to recruit constantly; most effectively with displays like this one.

The hope for the next generation of members likely will come from the children playing in the show's sand boxes with Tonka trucks.

“If you ask him what year John Deere was founded or in what state, he'll tell you,” said his Dad. “His uncle takes him on his lap and teaches him. All he wants to do in this life is drive a tractor.”

“That's where the new members will come from,” said Maguire. “From the sons of sons who grew up with the heavy iron they love.”

Like the featured machine at this event, a 1947 Link-Belt speeder, featuring a Denis Yaworski LS-85 shovel. Usually housed in a local antique museum nearby, the magnificent machine was bought by 90-year-old Clifford Williams when he was just 18.

Williams, Maguire said, put $18,000 into restoring it and it, ironically, has 18,000 hours on it. According to local legend, Williams sandblasted the beast, painted it in vintage colors, and made the pads by hand one winter out of solid steel plates. A true labor of love, it took him several weeks just to get the Link-Belt to the field.

“Guys just love doing this,” said Maguire. “You come here and run your iron and, how many places can you go, where you have enough room, and motivation to put a hole in the ground and put it all back together at the end of the day.”