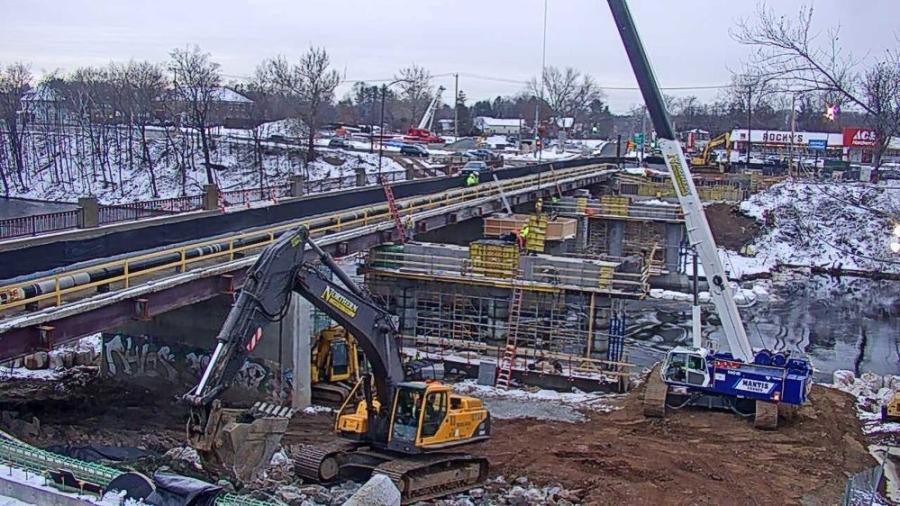 Peak days have nearly 35 NCS and subcontractor workers on site.

Northern Construction Service LLC (NCS) is 13 months into the Massachusetts Department of Transportation's (MassDOT) $21.4-million project to demolish and reconstruct the Morgan-Sullivan Bridge and associated roadway, traffic signal and pedestrian improvements in Agawam and West Springfield, an initiative to replace aging infrastructure in the state.

The preliminary work started in October 2018 and this was followed by Stage 1 road work (November to January 2019) and the ongoing Stage 1 bridge work and Stages 2A to 2D road work, which will be completed next fall. The plan is to complete the west side of the bridge and open it to traffic in July 2020 (two to three months ahead of the original schedule) and to complete the east side of bridge and open it to full traffic to achieve full beneficial in spring 2022. Final delivery is expected in the summer 2022. 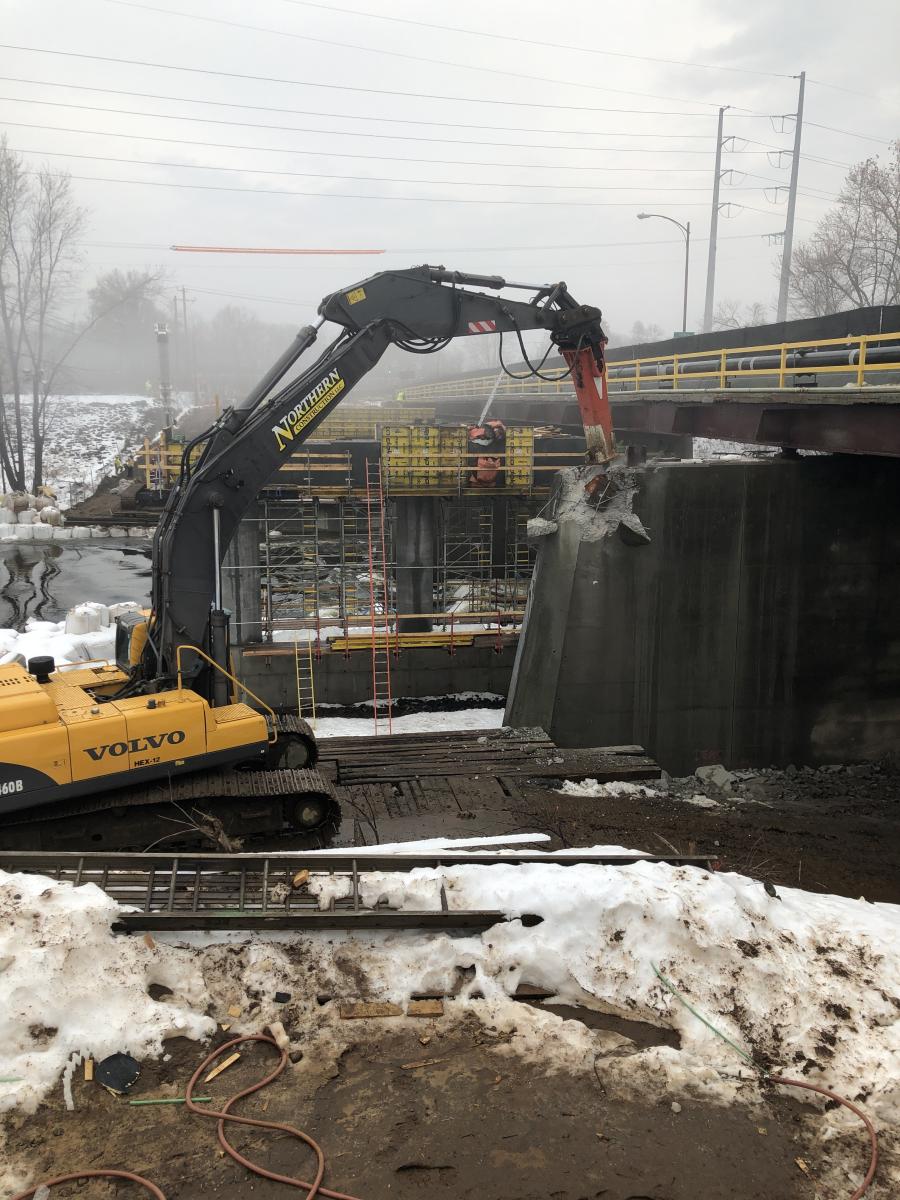 The bridge carries Route 147 traffic, approximately 24,000 cars and trucks daily, over the Westfield River between West Springfield and Agawam. It is being widened from two to three lanes in each direction, plus a left turn lane for vehicles at each end and complete streets improvements, which provides safe and accessible options for all travel modes, including vehicles, pedestrians and bicyclists.

Three intersections are being reconstructed and widened, with the installation of synchronized traffic signals and more visible traffic signs and pavement markings, at Memorial Avenue at River Street in West Springfield; Springfield Street (Route 147) at Main Street/Suffield Street in Agawam, and Springfield at Walnut Street/Walnut Street Extension in Agawam; and drainage systems for the roads will be modified with deep sump catch basins to improve water quality.

"The current bridge was built in 1946 and is structurally deficient/functionally obsolete, has substandard geometry and no bicycle accommodation," according to MassDOT. "Our engineers determined it needs to be replaced. It was missing/had deficient sidewalks, no right-turn lane onto the Big E, an inadequate shoulder width for Route147, non-ADA/AAB compliant wheelchair ramps, inadequate lane storage and configuration and deficient traffic signs and pavement markings. The project will result in improvements for each user of the bridge. Adding queuing space for vehicles on both sides of the bridge will ease traffic congestion."

"The staged construction approach was determined most feasible given the constraints of the bridge geometry and location," according to MassDOT. "A complete closure to demolish and reconstruct the bridge in its current location was deemed unacceptable due to the lack of an adequate detour and the anticipated impacts on travel, including on emergency response and businesses in the areas on both sides of the bridge. The designers considered a temporary bridge but determined it would have significant additional impacts on adjacent properties, utilities and businesses and would require the construction of temporary piers and intersections that would delay the construction schedule. 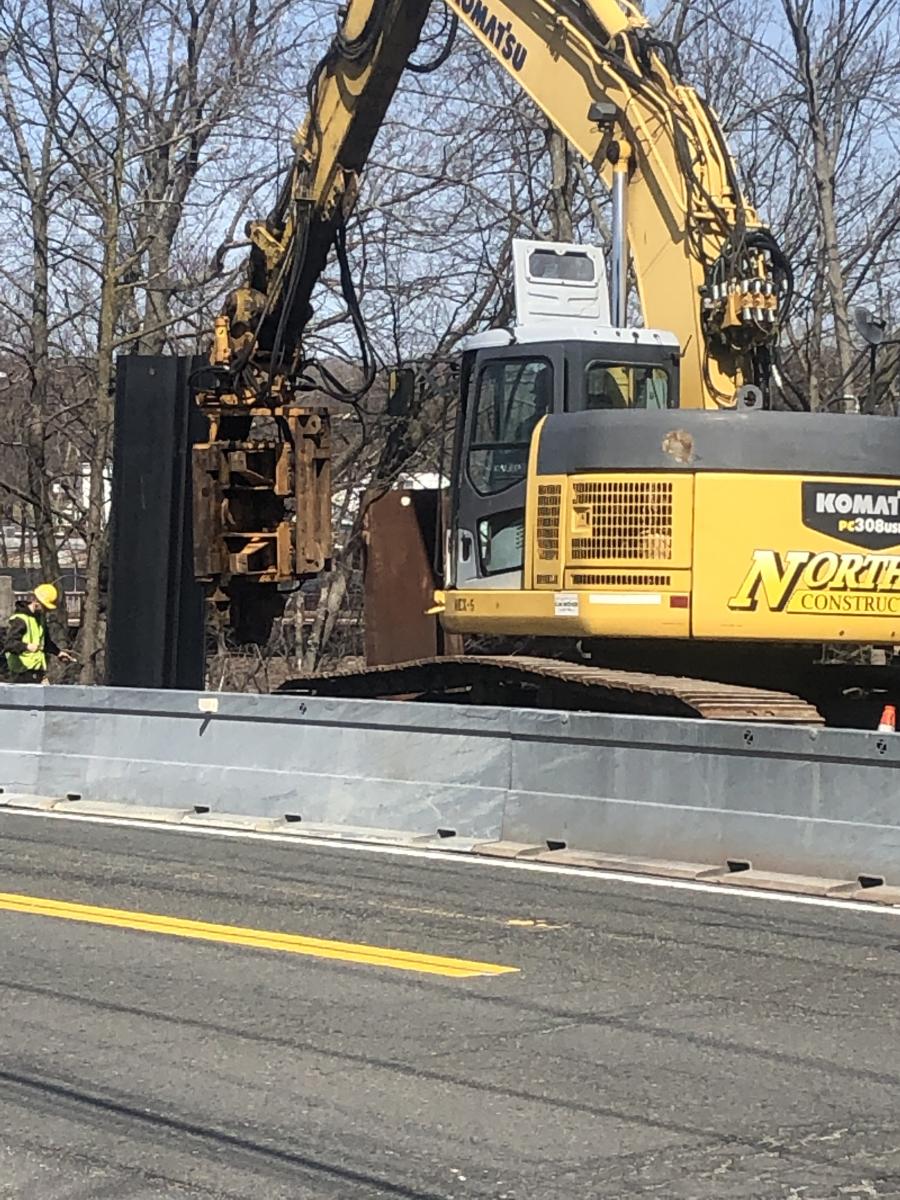 "Accelerated Bridge Construction techniques, such as fabricating large pieces of the structure away from traffic areas and disrupting traffic only to move and place them, were considered during the preliminary design phase," MassDOT continued, "[but] these options were not pursued due to the complexity of the bridge geometry, restricted access, soil conditions that require deep foundations and water control limitations."

The construction is impacting traffic and this started last June when NCS began demolishing the west side of the bridge, which occurred during daytime hours and was completed in mid-August 2019.

"The east side bridge has been reduced to one lane of travel in each direction, 24/7 during the construction," said MassDOT. "Bridge and road work during winter months will be intermittent, depending on weather conditions. Throughout this stage, there will be ongoing road work on local streets near the bridge. Advisories will be posted to the project website and announced to the project email list."

Other traffic management methods include temporary traffic signals at both ends of the bridge equipped with vehicle detection to respond to traffic demands and assign green time as efficiently as possible and the widening of the Route 5 South off-ramp to Route 57 West to include an additional lane. NCS is maintaining access to all businesses throughout construction and is posting signage indicating that businesses are open.

Public consultation and outreach, managed by Regina Villa Associates, has benefitted the project and the traffic plan.

A staged construction approach was determined to be the best approach given the constraints of the bridge geometry and location.

"A complete closure to demolish and reconstruct the bridge in its current location was deemed unacceptable due to the lack of an adequate detour and the anticipated impacts on travel, including on emergency response and businesses in the areas on both sides of the bridge," said MassDOT. "The designers considered a temporary bridge but determined it would have significant additional impacts on adjacent properties, utilities and businesses, and would require the construction of temporary piers and intersections that would delay the construction schedule. 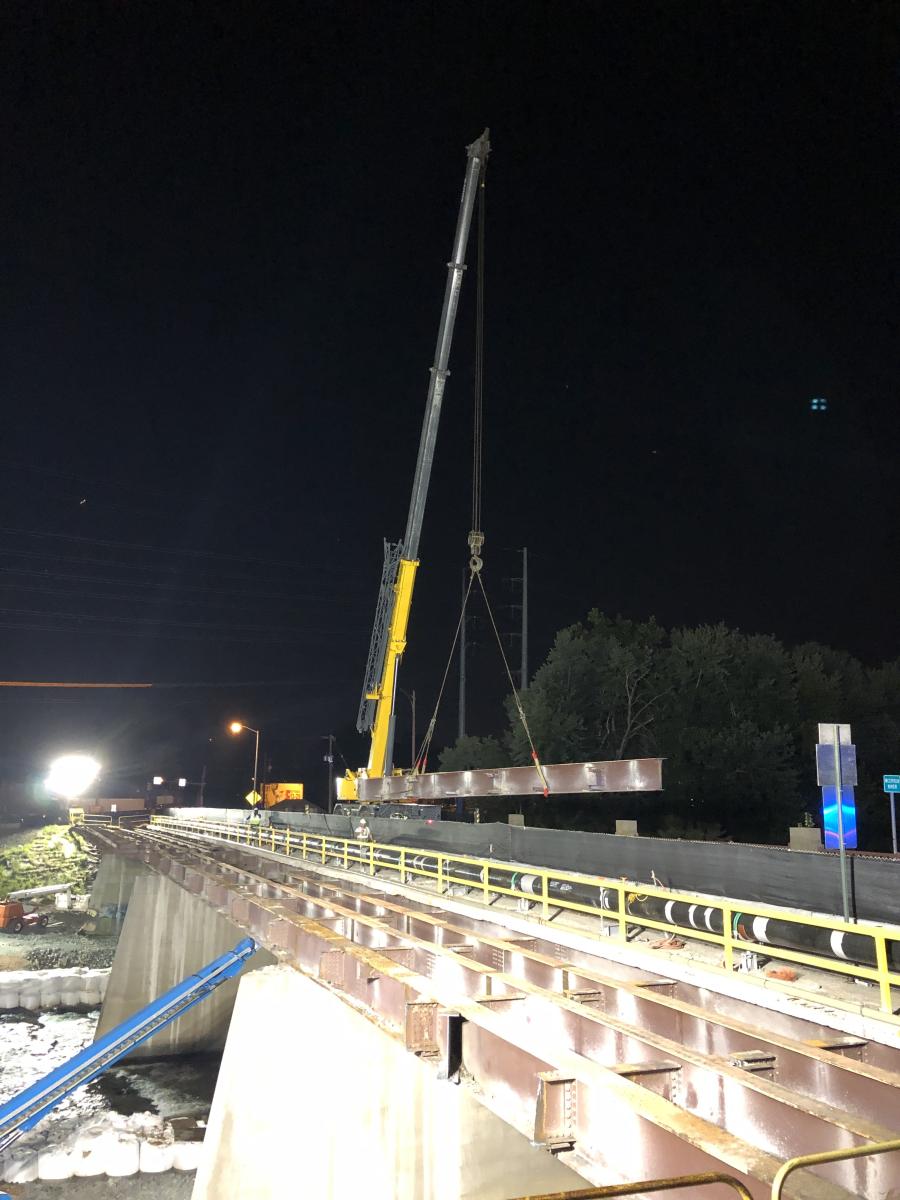 "There were the normal challenges of getting a job running — months and months of submittals, administration, ordering of materials and planning and scheduling," said Shawn Clark, NCS's project manager.

Stage 1 road work covered removing existing islands and installing barriers on the bridge to get it ready for construction.

"It was pretty straight-forward road work for the most part," said Clark.

The Stage 2 road work consists of installing the water and drainage pipe, widening sections of the road and bridge between five and 15 ft. in certain areas, and building new sections of road and sidewalks, complete with signals and electrical systems.

"The major challenge is dealing with the public," said Clark. "There are many businesses around the job, especially on the Agawam side and we do the best we can to coordinate with them and the traffic. We do some of the work at night and on weekends because we have to shut down certain roads."

It took six weeks to demolish the old west Stage 1 portion of the bridge.

"It was done in steps — first we took off the deck and the superstructures and then the abutments," said Clark. "Demolition is ever-changing, but nothing very surprising came up. It took a little longer than we wanted, but it went as planned from a scope of work perspective."

The new bridge is under construction.

"We've improved the work sequence," said Clark. "The job was delayed by two to three months because we couldn't get into the water — we had the worst spring of 2019 in terms of water and it was seven to eight feet too high to work in. We were supposed to be in the water in early April to put in the cofferdams in order to demolish and rebuild the new piers and do the drilled shafts — 30 to 40 feet deep. This was to be done in two stages, but when we started in June, we did the Stage 2 portion of the work concurrent to Stage 1 in one sequence under the existing Stage 2 bridge using low headroom drilling and other equipment. The two-month delay was gained back."

The erection of the structural steel superstructure was completed this past December, and now utility relocations are ongoing on the bridge and the deck will be formed and poured by mid-spring."

Similar methods will be employed for the demolition and reconstruction of the east Stage 2 bridge. 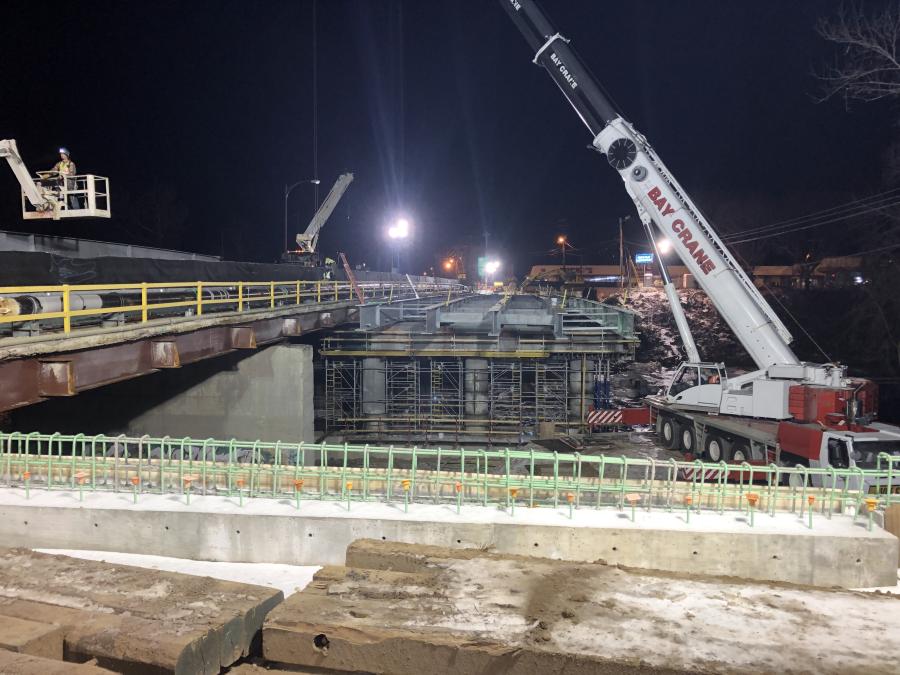 "The drilled shafts and pier walls are already in place, so once we demolish the superstructure and substructure of the west bridge," said Clark, "we have to drive the piles and form the abutments and the pier caps — we had only got the Stage 2 columns up as the pier caps conflict with the existing west bridge, so it must be removed first. Then we will set the steel and repeat the same process to open the bridge."

Clark has a solid management team, construction crews (including those of the subcontractors) that are pushing forward, and the support of MassDOT (District 2), along with their engineering firm, Benesch, as well as both the towns of Agawam and West Springfield, to resolve issues.

"We're one big team and we look out for each other," he said. "This is a challenging job and everybody's performed well — we would not be where we are otherwise."

Benesch, MassDOT District 2, NCS, and critical work of utility companies are in sync.

"The gas line relocations could drastically affect the project and have so far gone well," said Clark. "There are overhead utility relocations with Eversource, Comcast and Verizon, as well as the same on the bridge and those are also going well."

Materials to be removed — concrete, asphalt and steel — are expected to total approximately 15,000 cu. yds.

"Nearly everything gets recycled," said Clark, who noted that the asphalt and concrete are taken to recycling facilities to be put into new mixes, rebar and steel sent to scrap yards, and trees brought to facilities to create firewood and woodchips in accordance with permitted use and regulatory requirements. 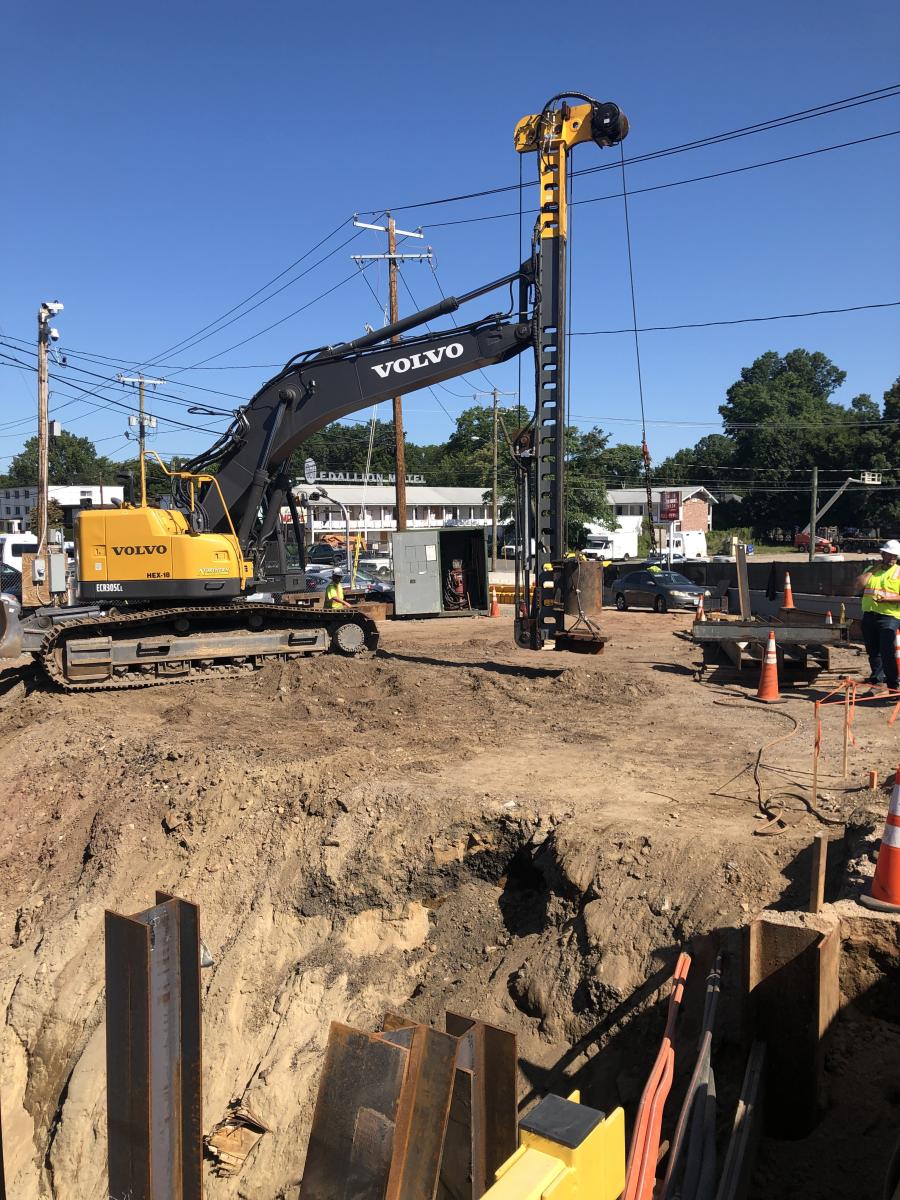 The foundation piles for the new bridge and approaching roadways will include an estimated 5,400 linear ft. of steel H-Pile and are expected to reach depths of 50 to 60 ft. Approximately 5,000 cu. yds. of concrete is expected to be used, as well as 900 tons of steel and 23,000 tons of asphalt

With six in-house technicians that visit the job site when needed, normal wear and tear issues are dealt with rapidly. Technicians from the dealerships pitch in when needed.

"We haven't had any impactful down times due to equipment failures or wear and tear, yet," said Clark, "and we have a lot of equipment on the job. All the operators track the hours on the equipment and we have a quality control program where all the oil changes and maintenance matters are tracked and reported back to mechanics for synchronized performance."

"They're an integral part of the project," said Clark. "When we need to rent something, they are readily available and get it ready for us, and they are resourceful to help keep our fleet going when we need to purchase or rent vehicles, fix them, and supply us with spare parts. CEG