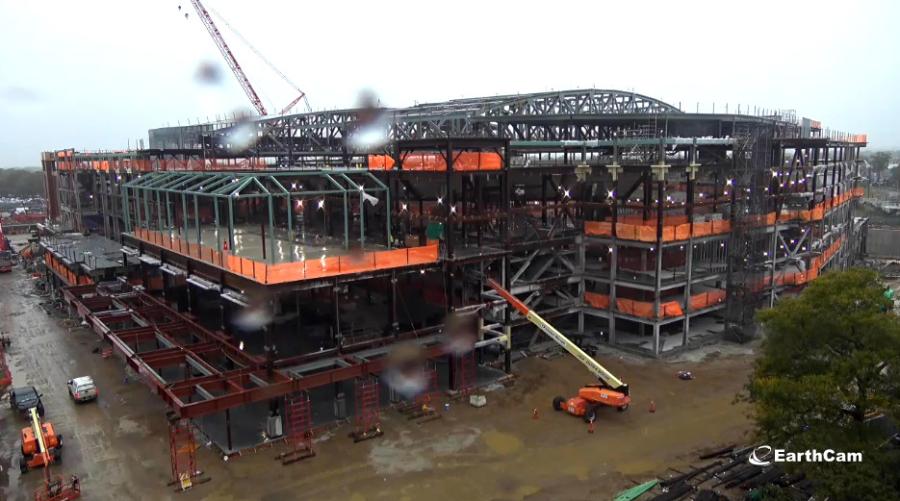 At Belmont Park in Elmont, N.Y., the evidence that the New York Islanders' new $1 billion arena is taking shape is everywhere.

A brick-and-tile facade is attached to most of the structure's exterior. Steel beams are in place across the top to hold UBS Arena's roof, targeted to be placed in December.

And concrete is poured all throughout in the shape of stairwells, seats and large concourses.

As Oak View Group chief executive Tim Leiweke guided three Newsday journalists on the first media tour of the site Oct. 7, the longtime arena executive pointed out the highlights he believes will make this "the last great arena built in New York of our generation."

"For an arena geek like me, this was the rarest of opportunities in terms of building an arena, because you have unencumbered open land right next to New York City," Leiweke said. "We didn't have to build on top of railroad tracks or deal with an existing structure.

"We had a clean slate to work with here, and it was a dream for our architects."

The eight loading docks at the new facility will allow performing artists to enter and leave quicker, which Leiweke said will make the location more attractive for top acts.

The concourses, he said repeatedly, "are twice as large as Nassau Coliseum," the Islanders' home arena from 1972 to 2015, and again from 2018 until this year.

And the Islanders' dressing room area — currently mapped out by cones on the lower level — is being designed as a replica of the Islanders' training facility in East Meadow, at team president Lou Lamoriello's request.

"Lou wants it to be so similar the players feel like they're always in the same place, whether at the arena or their practice facility," Leiweke said, referring to Northwell Health Ice Center in East Meadow.

In fact, two large holes are dug in the ground in the middle of what will become the Islanders' dressing room, surrounded by caution wires to avoid anyone mistakenly falling in. Those, Leiweke said, will be swimming pools for the Islanders' players.

"I recently told [NHL Commissioner] Gary Bettman that this arena is going to revolutionize the National Hockey League and economics of this franchise," Leiweke said. "We're building a complex where people won't just come to a game. Live entertainment has evolved to where we're building a complex where people park here, eat here, play here and cheer here."

The arena, targeted to be completed in November 2021, is the centerpiece of a $1.5 billion development at Belmont Park that includes a 250-room hotel and 350,000 sq. ft. of retail on 43 acres of state-owned land adjacent to the famed racetrack.

The shutdown of businesses in the spring from the COVID-19 pandemic cost them two months of construction time, which Leiweke said hasn't impacted their timeline too much. More important, the pandemic delivered the arena partners quite a bit of uncertainty about what the future holds for live events.

Leiweke isn't worried, saying he believes in the future of live entertainment while also pointing to upgrades to the arena plans such as "massive air handling systems" at each corner of the building.

Currently looking like empty elevator shafts, these structures he explained are designed to increase the air flow through large spaces. He said the technology has become more sophisticated in recent months because of concerns about large gatherings.

Once inside the physical structure that will be UBS Arena, it's easy to envision where the Islanders' new home ice will go. There's still dirt on the ground, and the space is filled with construction cranes, trucks and workers wearing helmets that don the UBS Arena name and the Islanders' logo.

Leiweke added, "The Islanders and their fans finally have a home that's designed for them."