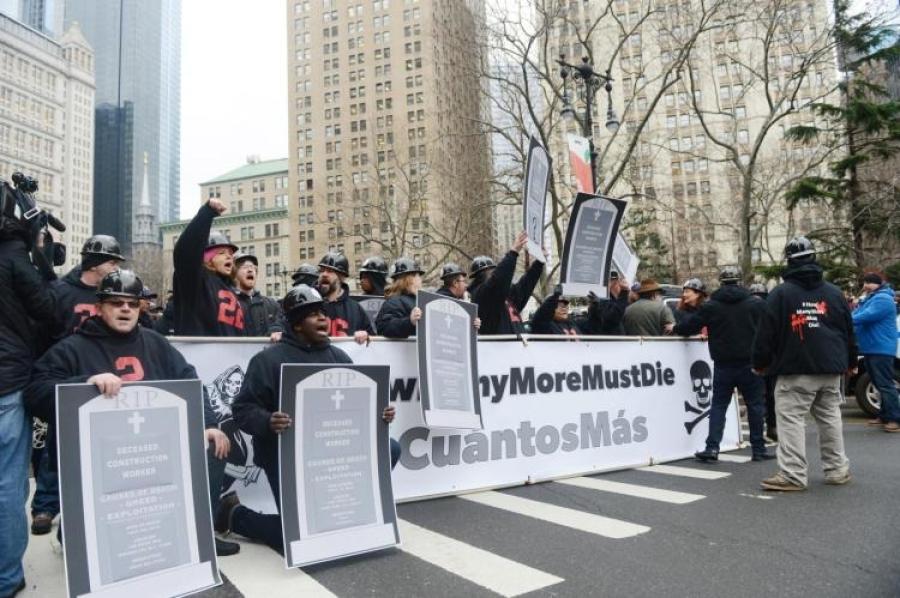 Hundreds of construction workers rallied in downtown Manhattan Wednesday for new safety reforms, and some wound up in police custody.

Their arrests came after they blocked the streets.

The workers were showing their support for the Construction Safety Act, which was introduced today at City Hall.

It's a package of bills that's meant to crack down on safety violations and to boost crane regulations.

It comes amid a new report that says construction deaths are on the rise.

We spoke with the New York Committee for Occupational Safety & Health about their study.

"Employers, if they see that there isn't enforcement, then they see that they can get away without safety protections, and when employers aren't following the laws that are meant to protect workers, workers get killed," said Nadia Marin-Molina, a spokeswoman for the committee.

So far, the mayor has not taken a position on the bills, but in the past he has said he supports union work and an increase in training.

Information about the event:

What is the Construction Safety Act?

As of January 18, 2017, the City Council in New York introduced a package of bills that would require additional safety training, mandate an apprenticeship program, address how fatalities are reported by the Department of Buildings and create a minority workforce task force, according to thisPoliticoarticle.

What is the report that is being referred to?

The Report is a study that was conducted by the New York Committee for Occupational Safety & Health. Entitled “Deadly Skyline: An Annual Report on Construction Fatalities in New York State.” This report covers fatalities on construction sites in New York state between 2015-2016 and includes a memorial list of those lost, a summary of the findings, and a list of recommendations for safety reforms.