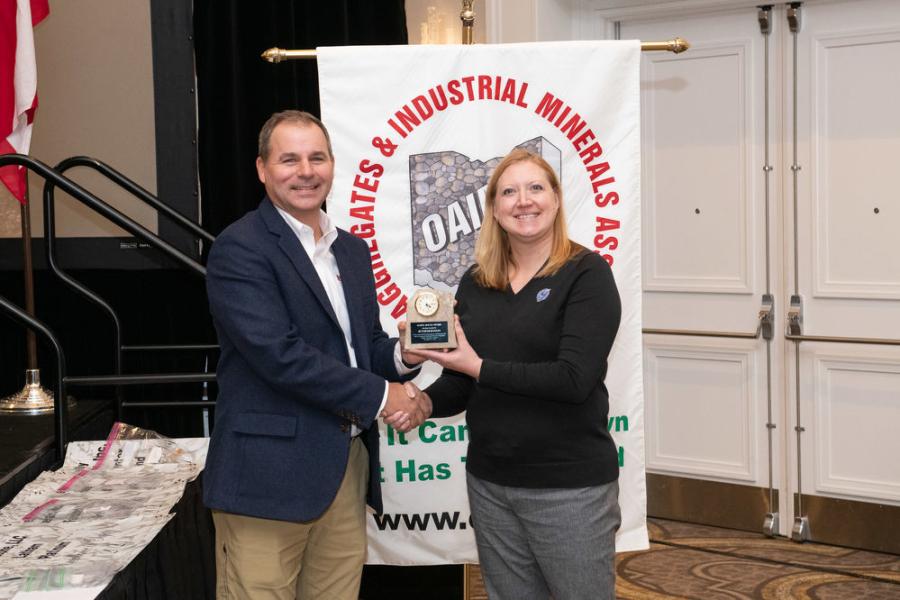 The Ohio Aggregates & Industrial Minerals Association (OAIMA) held its 2021 annual meeting and trade show in Columbus in November. During the event, which included educational sessions, an exhibitor reception and trade show, many individuals were recognized for their endeavors on behalf of OAIMA, including:

Bob Stewart of Columbus Equipment Co. was recognized for his service to OAIMA. Stewart served on the OAIMA board of directors from 2019 through 2021.

"Bob Stewart has long been a supporter and contributor to OAIMA and its mission," said Patrick Jacomet, OAIMA executive director. "He is always willing to share his vast knowledge of the industry in support of causes important to our members. His leadership on the board and willingness to volunteer his time are invaluable to us. He is a wonderful representative of the industry and in particular Columbus Equipment Co."

Gary Honchell of Process Machinery Inc. (PMI) was presented with the Hall of Fame Award in recognition for his service to OAIMA.

"Gary has long been a supporter and advocate of the OAIMA and its mission," said Jacomet. "His service to the industry, including his time on the board have contributed greatly to the advancement of our members and the association. Gary also serves the community as a volunteer firefighter. We are proud to present Gary with the OAIMA Hall of Fame award."

Jennifer Hanley of the Gilson Co. was presented with the "Rocky Award" in recognition of her support for the industry.

"Jennifer has long been a leader within our association and has been extremely supportive of our educational efforts," Jacomet. "She also is active at the national level through her work with ASTM, AASHTO and other specifying agencies. Her recent work on our MACC Tech program will be instrumental in the promotion of our vital industry as a solid career-choice."

John Miller of Fairborn Cement was presented with the "Retiring Director" award in recognition of his support for the industry and service.

"We are sorry to see John leave the board but are thankful for his service," said Jacomet. "His experience in the industry and participation on the board have brought a new and fresh perspective to OAIMA. We are grateful to John and all of the great folks at Fairborn Cement for their continued support."

Dan Mapes of the National Lime and Stone Co. was presented with the Hall of Fame Award in recognition for his service to OAIMA.

"Dan Mapes has long been a supporter and contributor to OAIMA and its mission," said Jacomet. "He is always willing to share his vast knowledge of the industry in support of causes important to our members. His leadership of our legislative committee has led to many positive changes benefiting not only our members, but the citizens of Ohio."

Paul Cuthbert of The Shelly Company was recently elected to serve as a director of the board.

"We are excited to have Mr. Cuthbert join our board of directors at OAIMA," said Jacomet. "Paul brings a wealth of experience to the table, particularly on the logistical front. We look forward to working with Paul for many years to come."

Ron Tipton of Lehigh Hanson was presented the "Ed Hole" award in recognition of his support for the industry.

"Over the course of Ron's career, he has always been a steadfast supporter of OAIMA and our mission," said Jacomet. "His longtime service and leadership on the board saw us through difficult times and led to many positive changes and growth. Additionally, Ron's support by allowing employees of Lehigh Hanson to actively participate in committee and association work has made us stronger."

The "Ed Hole" award is named in honor of industry pioneer, Ed Hole, and is presented to individuals who have provided leadership on the national or state level and have allowed their employees to participate actively in OAIMA.