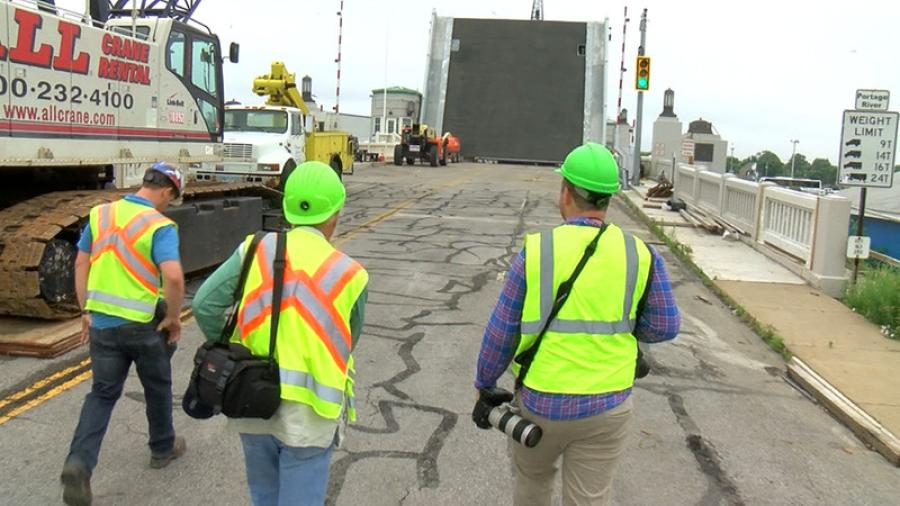 There are approximately 2 weeks of final tests that must be conducted on the Port Clinton Lift Bridge to ensure the bridge runs properly. (WTOL photo)

The northern half of the Port Clinton Lift Bridge is operational at half power, by design, after crews were able to get it aligned properly last week. This week crews are working on alignment of the southern half of the bridge.

After the southern half is properly aligned and tested at half power, each half of the bridge will be bolted into permanent placement with approximately 200 bolts. The bolt holes are reamed to exact measurement of the final bolts—so exact that even a piano string won't fit between the bolt and the hole. This is expected to take about a week.

It is ODOT's goal to be able to run testing of full power operations the first week of July. However, there are approximately 2 weeks of final tests that must be conducted to ensure the bridge runs properly at full power, before it is safe to allow drivers on the bridge. In order to expedite completion and reduce further delays, ODOT has paid to have the designer on site to review and approve allowed tolerances with the alignment.

Because the remaining work must be completed in this sequence, ODOT must once again delay the opening date. As is clear from the previous delays, it is hard to set a firm reopening date with a project as complex as this one that includes so many different mechanical and electrical components. ODOT will open the bridge as soon as possible once all the testing is completed. At this time, the best estimate to reopen the bridge is July 20.

ODOT will continue to update the public as it learns more information.

“This is a once-in-a-lifetime project,” said Patrick McColley, district deputy director of ODOT District 2. "If we rush to get it open and do not have the bridge aligned precisely, we will likely have to come back in a few years to repair it. If we finish this right, we only have to have this one major project in our lifetime. We estimate this bridge will last another 75 years before needing a second rehabilitation project."

According to the ODOT webpage, ODOT shares the frustrations of these delays and will open the bridge as soon as possible.

The waterway below is accessible with one span of the bridge to remain operable at all times. Occasionally, both spans may be open.