The I-71 South Side widening/ interchange reconstruction is a $153 million initiative in Columbus, Ohio, that will greatly improve traffic flow for motorists and commercial traffic. 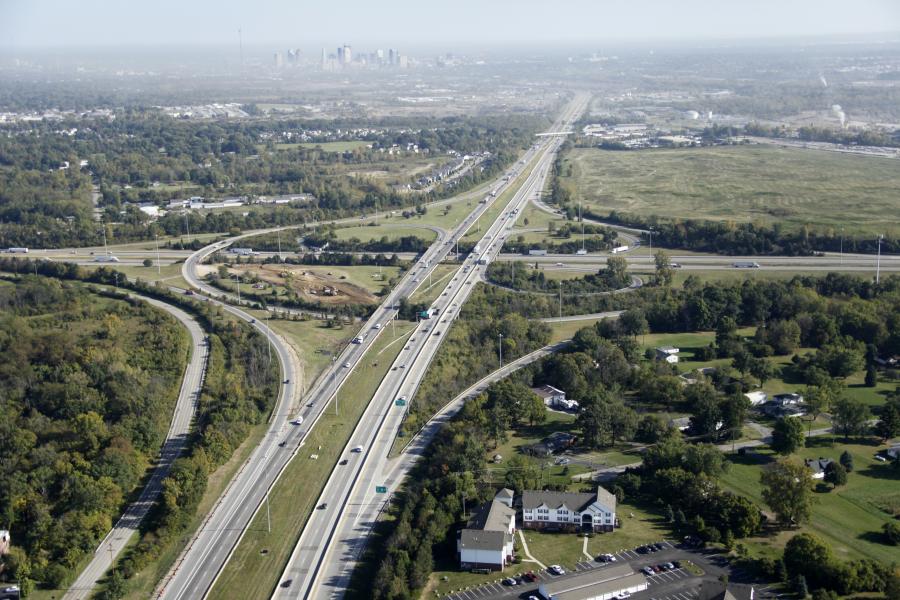 Shelly & Sands Inc. (S&S) has been working on Ohio Department of Transportation's (ODOT) South Side Mega Fix project. The I-71 South Side widening/ interchange reconstruction is a $153 million initiative in Columbus, Ohio, that will greatly improve traffic flow for motorists and commercial traffic.

Project 1, $40 million, which started in September 2015 and will be completed this fall, added a lane in each direction on I-71 between Stringtown Road and SR 665, widened and re-decked the bridges over White Road and constructed several noise walls.

Project 2, $113 million, will reconstruct and add a lane in each direction on I-71 between Stringtown Rd and I-70, reconfigure the I-270/71 southbound interchange, replace 12 bridges and build three noise walls. This work started in mid-August and will be complete in the fall of 2020.

The Project 2 work also will see a new ramp from I-71 south to Stringtown Road; relocate a ramp from I-270 east to I-71 south; replace all the pavement in both directions on the interstate with asphalt; replace all the pavement on the ramps with new concrete; and upgrade safety features, including drainage, signing and guardrail. The noise walls are on the west side of I-71 between Dyer Road and I-270 and on the west side of I-71 from north of White Road to the existing noise walls.

This project reduces congestion and enhances capacity, replaces existing pavement, and reconfigures [the] I-71/I-270 Interchange (SB only), according to the project's page. On this 5 mi. stretch of I-71, the current average daily traffic (ADT) is between 100,000 and 125,000 vehicles a day. The closer one gets to Columbus, the number increases. For project design year (2037), the expected ADT is expected to be between 140,000 and 150,000.

Johnson, Mirmiran & Thompson Inc. (JMT) and TransSystems were the prime consultants that designed the new roads and bridges for ODOT. The funding for the project was provided by bonds, federal, state and major rehabilitation funding.

“The safety issues are congestion leading to rear-end and side swipe crashes,” said Nancy Burton, ODOT's Public Information Officer of District 6. “This section of I-71 is a major thoroughfare for north south traffic between the cities of Columbus and Cincinnati. It's one of the few remaining locations on Interstate 71 in Ohio that has not been widened to three lanes. It is time especially when the economic growth south of the city. There are two new hospitals in Grove City, a suburb just south of Columbus.

“The interchange of I-270 and I-70 that you travel through if you are driving on I-71 was built decades ago,” she added. “The cloverleaf ramp design cannot handle the large traffic volumes. That is why new ramps and bridges will be constructed as part of Project 2. These new ramps will eliminate the weaving and merging for drivers trying to exit at Stringtown Road from southbound Interstate 71 and drivers on westbound I-270 trying to head south. Currently, drivers 'jockey' for the same piece of pavement, and that is not safe and efficient travel.”

The project is removing a portion of the existing floodwall for the Scioto River along I-71 north of Greenlawn Ave.

The work will impact traffic, but ODOT is doing its best to mitigate the problems that will arise.

Ryan Porter, Shelly & Sands project manager of Contracts 1 and 2, is confident that Contract 2 will be completed on schedule based on the solid work done for the first contract.

“We've laid out temporary pavement, done some embankments at the Frank Road off-ramp, milled and repaved a bit of the shoulders. We have not done a whole lot because paving crews are scarce right now and we're waiting on an asphalt crew to come in and pave for our MOT pavement,” he said, “and we have built our laydown yard, about four acres, which is filled with portable barrier wall and pilings for the project, which are coming in daily.”

Since August, the work has been taking place 24/7 with two shifts.

“Weather permitting,” said Porter, “we'll be working through the winter. The job runs from now to 2020, but basically, it needs to be built by the end of the 2019 construction season. Final pavement and cleanup are the only things left for 2020. By the end of 2018, half the roadway and bridges have to be done and traffic switched to the new roadways.”

As noted, S&S is following an ODOT design.

At peak there will be between 100 and 120 S&S and subcontractor employees on site, which includes 10 construction crews.

“The challenge of this project is focusing all the crews and people that will be working at the same time to get the project done in the timeframe that ODOT has allowed us to build it in,” said Porter. “Traffic is going to be a nightmare, but we can keep motorists and our crews safe during the construction. We've staged some critical concrete barrier out in the inside median so that when we do get the pavement on the outside, it's already set and all we have to do is swing it out into play.”

Porter is being assisted by superintendents Teddy Cunningham and Faour Alfaaur.

“They're helping me with everything that has to be done,” said Porter. “They have a lot of experience on large projects.”

The work on Contract 1 is nearly complete, and crews and equipment working on it are being transferred to the Contract 2 work.

“We know the terrain and the challenges associated with this stretch of highway,” said Porter.

S&S has sufficient space to store materials, set up temporary offices, park equipment, and establish an on site repair facility.

The company is still determining the expected amounts of materials to be removed and used on the project. Materials will be recycled as much as possible. The subcontractors will be bringing in a lot of equipment, especially multiple-track backhoes and similar equipment. S&S is employing several Cat D6 dozers and at least one D7. S&S has one on site mechanic for each shift, with additional mechanics called in as required.

“Their role is critical and they're doing a good job,” said Porter. “They do what is needed to get the equipment back up and running rapidly.”

The day shift mechanic is Brian Holvsphurer, who has been with S&S for several years. He and the night shift mechanics, which involve several personnel, are dealing with routine maintenance and daily wear and tear issues such as broken seals, flat tires and brake repairs.