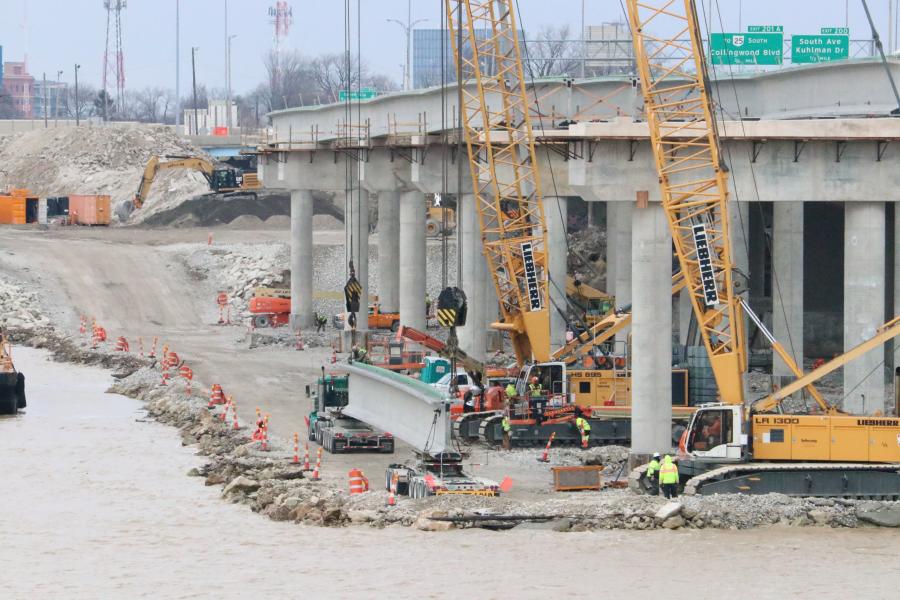 The Ohio Department of Transportation (ODOT) is overseeing separate projects in Wood and Lucas counties which includes I-75 widening, reconstruction and bridge replacement at a total cost of $352 million. (Rebecca Dangelo photo)

The Ohio Department of Transportation (ODOT) is overseeing separate projects in Wood and Lucas counties which includes I-75 widening, reconstruction and bridge replacement at a total cost of $352 million. The north project is in downtown Toledo, between South Avenue and Dorr Street, with the south project taking place between Buck Road and South Avenue. It includes the Michael DiSalle bridge. Work on the projects began in 2018.

"I-75 has a significant curve between Wales Road and the Maumee River, which has led to several accidents in the past," said Mike Benton, ODOT project engineer. "This didn't quite meet our current geometric standard, so the curve needed to be lessened. Also, several of the bridges need rehabilitation or reconstruction."

Kokosing Construction Company is the prime contractor for the Wood-Lucas County section. 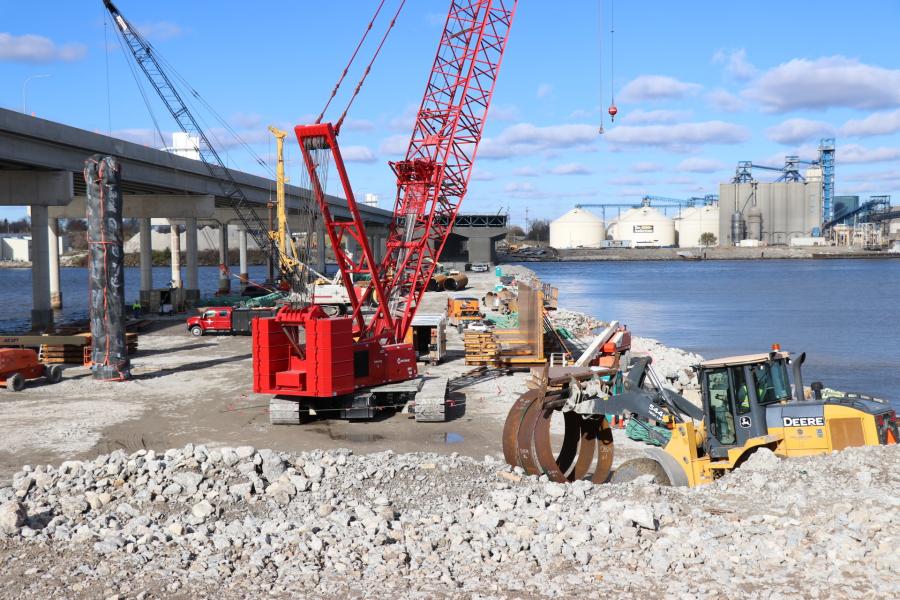 "Kokosing has always proved to be an innovative contractor," said Benton. "This has helped with some of the complex work items, including the reconstruction and demolition of the Disalle Bridge over the Maumee River. They also have numerous resources, including a large equipment fleet; their own material division for aggregates and asphalt; and personnel with experience on high-profile projects.

"The contractor submitted, and ODOT eventually accepted, one of the largest Value Engineering Change Proposals [VECP] in ODOT history. This included changing the northbound Miami Street entrance ramp that was to be part of a diamond configuration into a trumpet configuration. This reduced the amount of work in an area with poor soils and eliminated a ramp bridge."

The biggest challenge on this project involved poor soil conditions, particularly in the area between Miami Street and the Maumee River.

"In the past, this area was used as a waste site for a byproduct of the glass manufacturing process called ‘rouge,'" said Benton. "This was a unique material that was very stiff, with a high compressive strength in its undisturbed state. However, once disturbed it could turn into a semi-liquid state quickly. This led to ODOT utilizing ground improvement techniques that had never been used on ODOT projects.

"The work consisted of installing a series of controlled modulus columns [CMCs] that were designed by the contractor. The big challenge was that the material didn't turn into the semi-liquid state as often as the contractor anticipated, which made the installation more difficult.

The main item of work is setting beams on the new northbound Disalle Bridge and prepping for deck pours. Ground improvement work is beginning on the north side of the river. This will lead into construction of a large MSE wall and significant amount of embankment placement for proposed NB I-75.

Due to the realignment of I-75, three pairs of bridges will be torn down during construction.

"For the I-75 section from Buck Road to South Avenue, the significant improvement necessary to meet current standards was lessening the curve between Wales Road and the Maumee River," said Benton. "This area of roadway no longer met our geometric standards. In addition, there were various entrance ramps that didn't meet current sight distance and merge distance standards. 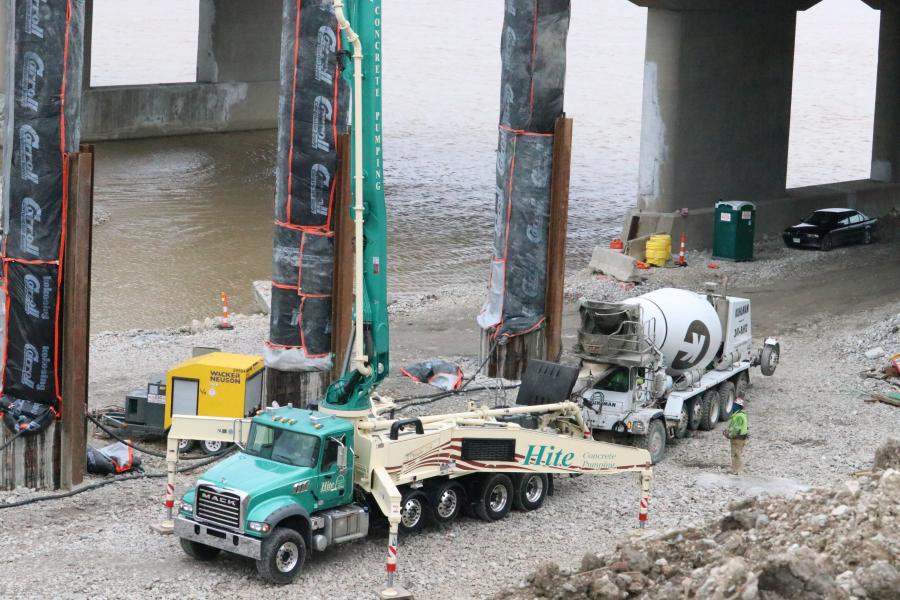 "A significant improvement for the Miami Street and South Avenue interchanges is that they will be connected in both directions via add/drop lanes on the proposed Disalle Bridge. Merge distances were an issue with both interchanges, and this will greatly improve that. All South Avenue ramps will be reconstructed, but only one will undergo a significant reconfiguration.

"The existing SB I-75 entrance ramp from South Avenue entered I-75 at a sharp angle and had a very short merge distance. The entry angle will be greatly improved, which will help sight distance and the add/drop lane will fix the short merge issue. The Miami Street interchange was to be reconfigured from a partial clover leaf to a diamond interchange per the original plans. However, the VECP will make the NB Miami Street ramps into a trumpet configuration."

Replacing the I-75 DiSalle Bridge over the Maumee River is no small endeavor, according to Benton.

Key tasks remaining include the northbound roadway north of Wales Road and all the proposed northbound bridges that need to be built.

"In addition, the northbound and southbound bridges between Wales and Miami, the northbound I-75 bridge over Miami and the remainder of the existing Disalle Bridge all need to be demolished. Also, there is an area north of the river with a significant amount of fill to place along with a sizable MSE wall to construct." 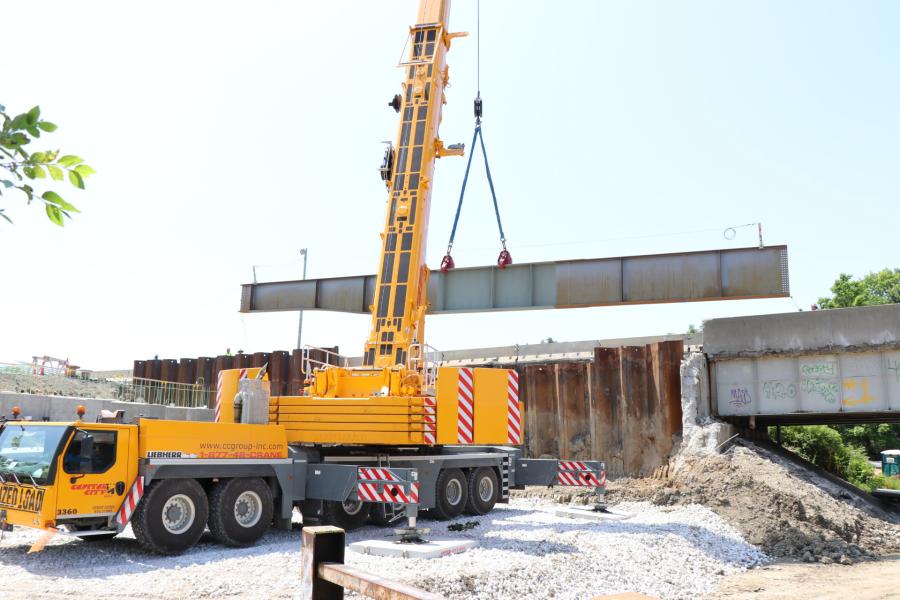 As for main materials, "The roadway pavement buildup on this project consists of asphalt," said Benton. "Also, there are five pairs of bridges on this project, so there is a significant amount of concrete being utilized on the job. These are the main materials being used, along with aggregates for roadway and the temporary causeway in the river."

"The IR-75 bridge through downtown Toledo over Erie Street/Collingwood/Swan Creek/Anthony Wayne Trail is a very complex structure. This structure is in a curved section of highway, is more than 1,800 feet long and has entrance and exit ramps tie into the structures. Between the traffic requirements for below streets, waterway restrictions, curve, superelevation and ramp tie-ins, the construction of the structure takes particular care and expertise."

Said Ruedel, "IR-75 over Norfolk Southern Railroad [NSRR] was a challenge. The NSRR bridge was over two main NSRR lines, as well as immediately adjacent an Amtrak station running four trains a day and a NSRR maintenance yard. Norfolk Southern, through early communication, told the project team the seasonal window from Thanksgiving to Christmas would be the busiest time of year, with more than 75 trains a day, and that any track outages shouldn't be expected during this time frame.

"Additionally, the four daily Amtrak trains ran between 11:30 p.m. and 6:30 a.m. however, the exact times couldn't be guaranteed, and stoppages of the Amtrak line weren't permitted even if the train was not on time. To set girders over the railroad for this bridge during the second stage of construction, ODOT took the highly irregular step of allowing the contractor daytime stoppages of IR-75 to deliver steel girders and place them during non-peak railroad hours to avoid Amtrak conflicts. The permitting of daytime restrictions on IR-75 required months of planning."

The structure IR-75 over NSRR has already been completed, along with structure IR-75 over Segur Avenue. Reconstruction of Anthony Wayne Trail northbound and southbound between City Park and downtown also has been finished. In total, the downtown Toledo project has demolished 10 structures, all by mechanical means.

Regarding site work, specifically along the Anthony Wayne Trail corridor, the project has worked through unique circumstances related to the legacy of the existence of a canal system and warehousing near downtown Toledo within what is now project limits.

"While many of the warehouses, railroad yards and canal system are no longer in existence, the remnants and impacts remained to be addressed by the project.

"The reconstruction of Nebraska Avenue eliminated several spans that were over railroad tracks [that no longer existed] for a storage yard; several hundred feet of buried railroad lines were to be removed by the project. Also, the proximity of the project to Swan Creek and the Maumee River meant that an old canal system was within project limits. While buried and not specifically an issue in a few spots, drainage to be installed by the project encountered portions of the buried canal."

"Due to the silt in the soil in the area, the project excavation is affected by rain once the soil is exposed. This can provide an additional challenge to the contractor when the material is needed to balance excavation/embankment within the project site."

The key improvement of the Anthony Wayne Trail interchange will be the elimination of the left side merges. 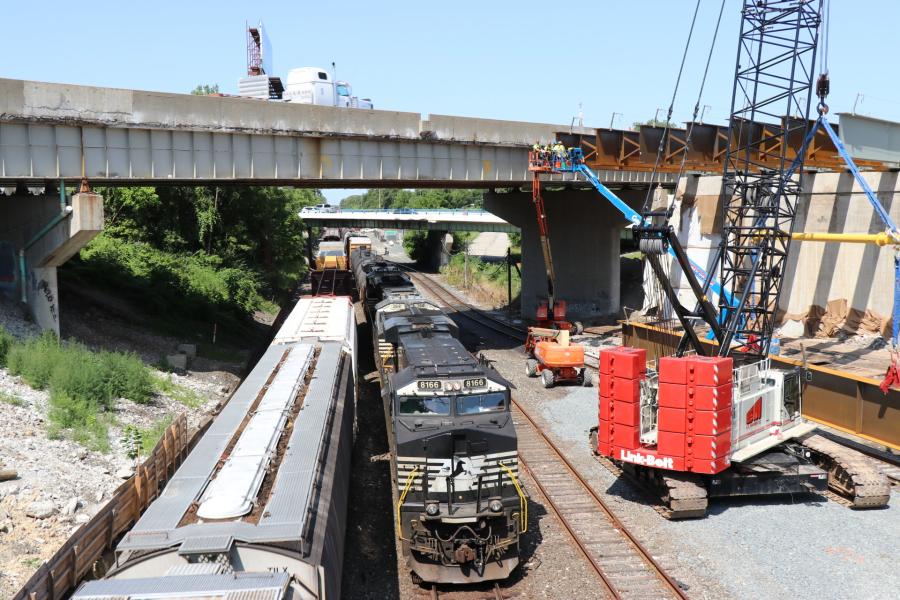 As for unexpected issues, said Ruedel, "Contractor access between Segur Avenue and South Avenue during phase construction was a significant issue. This area was the project limit interface between both projects, the phasing of both projects cut off access between South Avenue and Segur Avenue within project limits. ODOT partnered with the city of Toledo to gain haul road access on two residential city streets directly abutting IR-75. ODOT and the contractor looked at various options including mainline ingress/egress and staggered phasing, but these options presented significant safety concerns and/or project delays and costs."

Ruedel said despite the challenges, working on a project that will serve so many for years to come is rewarding.

"A project of this nature is truly generational. This is evident by the lifespan of the existing structures having been built in the 1960s and lasting for nearly 60 years. ODOT has strategically upgraded the regional IR-75 corridor beginning in 2014 with the current two projects being the final sections of the original IR-75 corridor upgrade. The safety benefits of the previously completed sections has already become evident."

All construction is expected to be completed by summer 2023. CEG