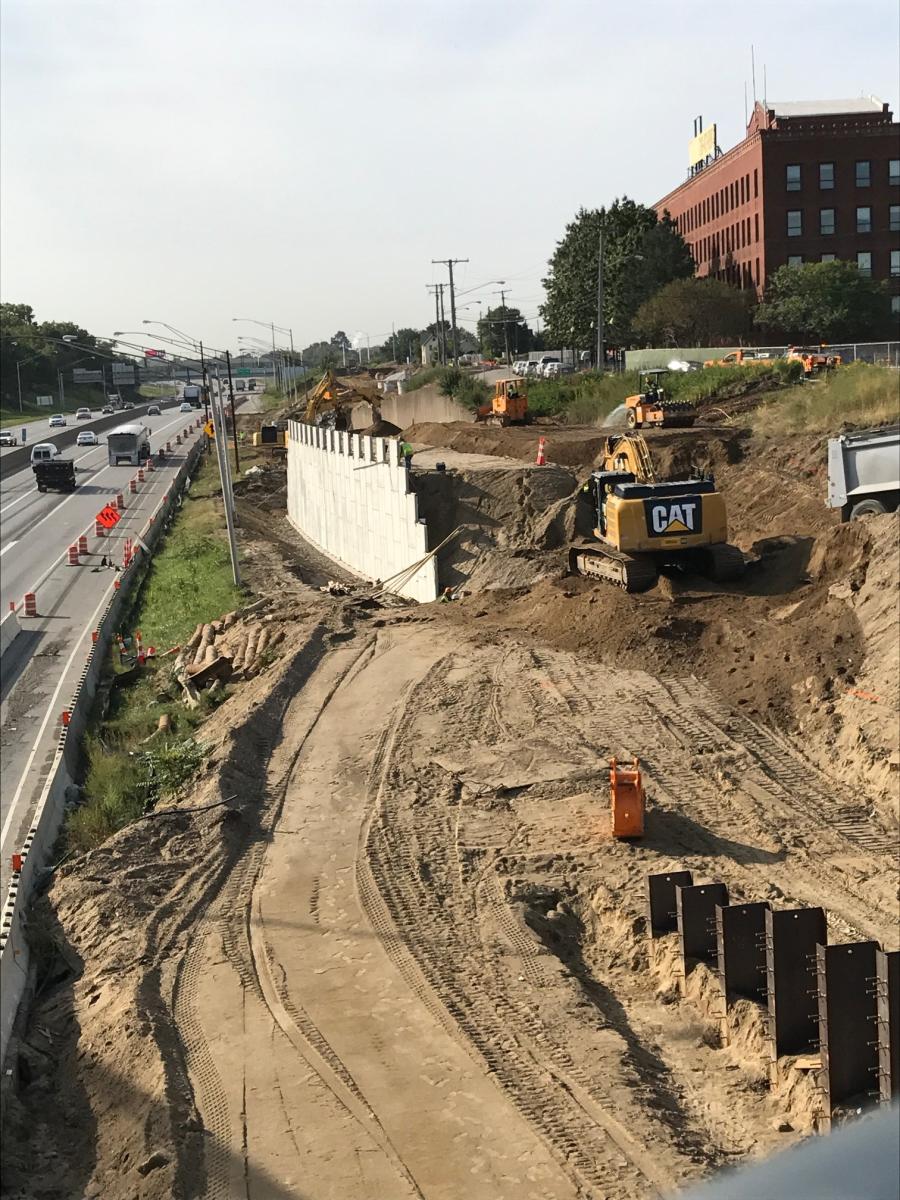 As part of its multi-phase Cleveland Innerbelt Modernization Plan, the Ohio Department of Transportation is spending $28.9 million on the construction of a new frontage.

As part of its multi-phase Cleveland Innerbelt Modernization Plan, the Ohio Department of Transportation is spending $28.9 million on the construction of a new frontage, which connects Broadway Avenue (SR 14) with Pershing Avenue on the west side of I-77 and moves the Broadway Avenue entrance ramp (to I-77 south) to Pershing Avenue via a new Frontage Road on the west side of I-77 in the city of Cleveland. It also is replacing the Broadway bridge. 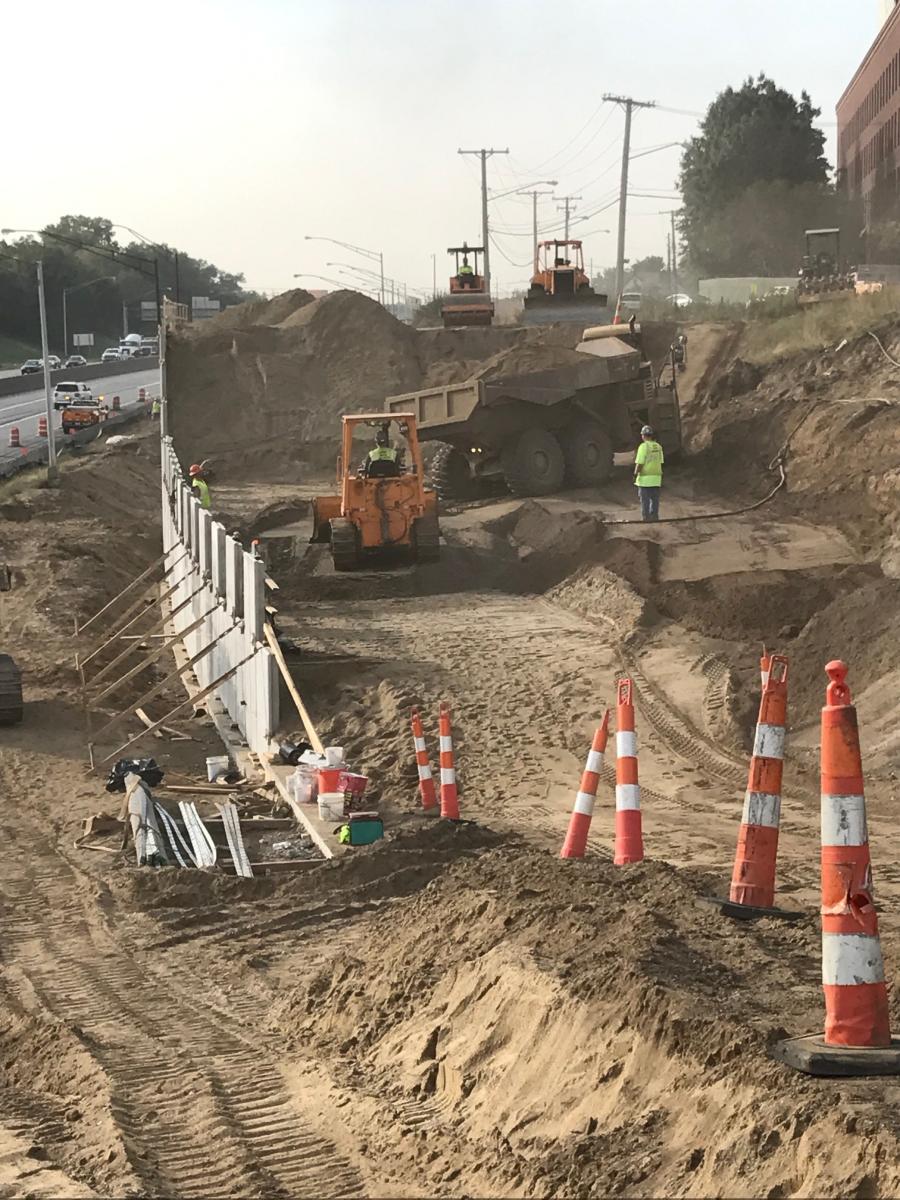 The project website states the overall Innerbelt Modernization Plan “is focused on improving safety, reducing congestion and traffic delays and modernizing interstate travel along I-71, I-77 and I-90 through Downtown Cleveland. This investment by the state of Ohio will rehabilitate and reconstruct about five miles of interstate roadways — which includes the two new George V. Voinovich Bridges that carry I-90 traffic — and address operational, design, safety and access shortcomings that severely impact the ability of the Innerbelt Freeway system to meet the transportation needs of Northeast Ohio.”

“This project provides infrastructure improvements that will enable ODOT to widen I-77 north and south from two lanes to three lanes in each direction over I-490,” said David Lastovka, Cleveland Innerbelt Corridor Project manager. “The project replaces the existing Broadway Bridge over I-77 with a longer span bridge. Additionally, this project removed the existing Broadway Avenue (SR 14) entrance ramp to I-77 south. That entrance ramp is being replaced with a frontage road from Broadway to Pershing, where traffic can then enter I-77 south. The consolidation I-77 south entrance ramp traffic allows the third lane of I-77 south traffic to better merge with the system ramps from the I-490 interchange.

“This work was planned as part of the overall Cleveland Innerbelt Corridor Modernization Plan,” Lastovka added. “That study started in approximately 2000 and concluded with an FHWA Record of Decision in 2009. This project will address peak hour congestion issues along the I-77 corridor as it approaches downtown Cleveland and improve safety as it relates to typical congestion related crashes, i.e., rear end, side-swipe type accidents.”

The reconstruction of the bridge started on March 2 and will see a nine month closure of the structure. Traffic on I-77 north and south at Broadway Avenue has been shifted to the right in preparation for overhead bridge demolition and construction operations expected to be complete in late-2018.

The design for the design-build project was prepared by E.L. Robinson Engineering of Ohio.

“One of the biggest design challenges on the project was construction of the 63-degree skew bridge for Broadway over I-77,” said Lastovka. “Spans for this bridge are 221 feet 8 in. and 163 feet and 6 inches. Broadway had a general appraisal of a six and was built in 1963. This project was driven more by need to widen I-77 than bridge conditions.

“The new Broadway bridge is being built with 9.5 feet deep precast, post-tensioned concrete beams, a first for ODOT,” he added. “Due to the large number of underground utilities on a relatively small project footprint, E.L. Robinson Engineering utilized four different retaining wall types, including a retaining wall constructed using jet grout soilcrete columns with a cast in place facing. The new bridge is designed to current design standards and can handle heavy truck traffic.” Construction for the new multi-use path on the west side of I-77 between Broadway and Pershing will continue through spring 2019, with pedestrians being detoured via Roseville Court and East 45th Street, save for the paved portion of the path between Czar Avenue and Pershing.

“Upon completion of the Broadway Avenue Bridge in late-2018,” stated the web page, “the new Frontage Road will carry only one lane of southbound traffic between Broadway and Pershing.”

Kokosing has completed a retaining wall to support the new Frontage Road that connects Broadway to Pershing.

“This new road, which we finished in December, is a dual-purpose road,” said Jack Weaver, Kokosing's project manager. “At the end of the job it will serve as on-ramp from Broadway to I-77 SB, and in the interim, it is a detour route hosting two-way traffic — northbound and southbound — as we demolish the bridge. The main objective for 2018 is to finish this bridge.” 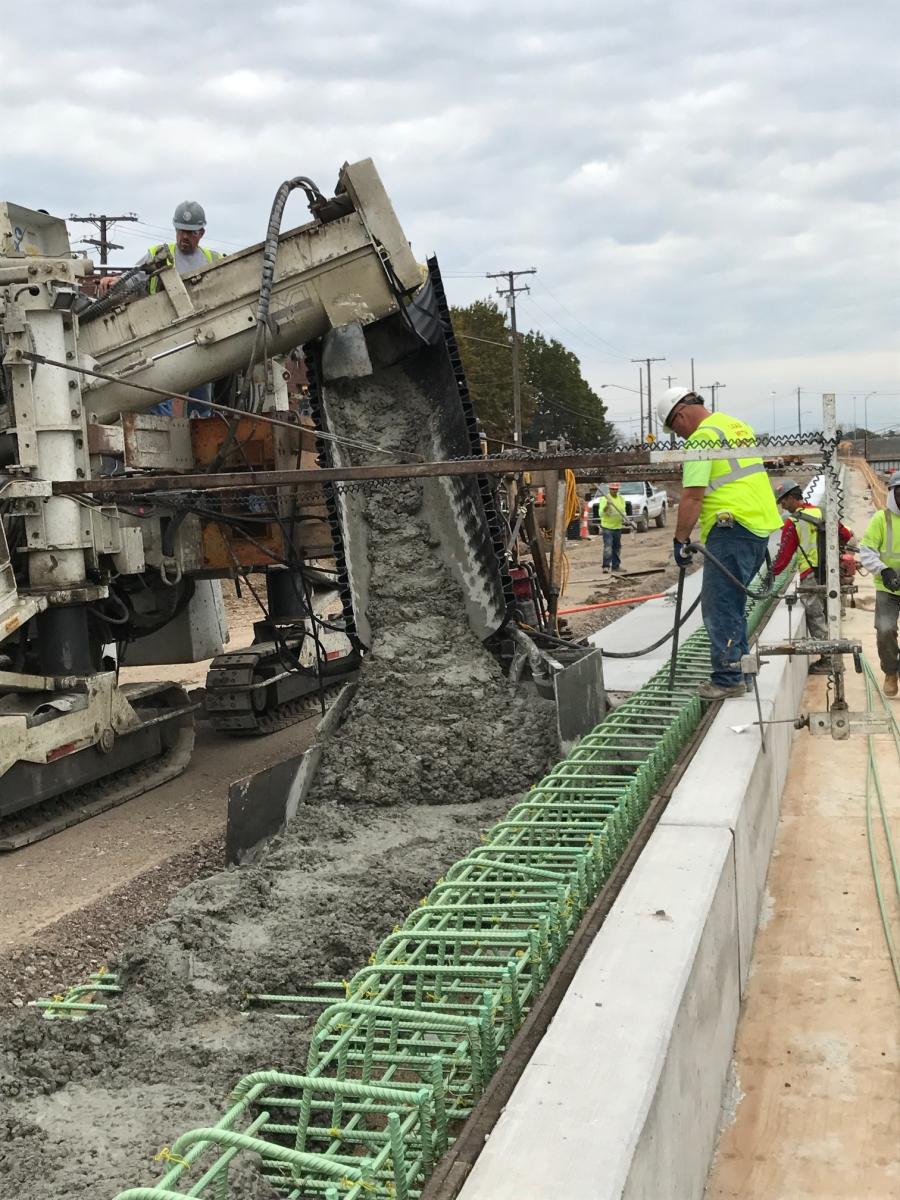 “We've got the footers, abutments and piers built,” said Weaver, “and we geared up for a weekend closure in late July to start erecting the concrete beams – 9.5 feet tall, roughly 210,000 pound segments — that will be post-tensioned after erection.”

To meet the aesthetic requirements, brick liners will be placed on the two abutments and pilasters. Bridge decking will then begin the end of August, with an anticipated deck pour around mid September.

“We will have Broadway Avenue opened to two-lane traffic before November 30,” said Weaver. “Complete opening of all lanes on Broadway will not occur until June 2019.”

Kokosing also has to seal the MSE wall that was constructed last season.

“We have to build a portion of three-quarters of a mile of I-77 SB from Broadway to Pershing,” said Weaver. “In 2019, the work will consist of finishing another phase of I-77 southbound in the same area and tying in a lot of side roads into Broadway because the bridge construction results in raising the background elevation about six feet. Some of the nearby interchanges, including Gallop and Dilly avenues and Roosevelt Court, need grade separation work.”

The I-77 bridge work is taking place nearby, along with other ODOT projects, which makes it a crowded area with lots of materials and equipment being brought in and out of the area.

“It's a challenging job for sure,” said Weaver. “There's a lot that goes into it in terms of utility coordination and relocations and large sanitary sewer, storm drain, and trench drain work. We also had to relocate overhead power lines with the help of CPP and U.S. Utilities, which required us to close the highway. There's a lot of intricate details that go into this job and many of these things require closing the freeway down completely. We're contractually allowed 15 weekend closures. We will have used three so far, and there are more to come, including the setting of the bridge beams.”

Most of the work is done by day, although there have been a few night shifts, which has about 45 plus construction workers on site. They recently worked on eight consecutive Saturdays to keep the project on schedule. There are no plans to do any winter work after the start of December, with crews returning to the job in early March. 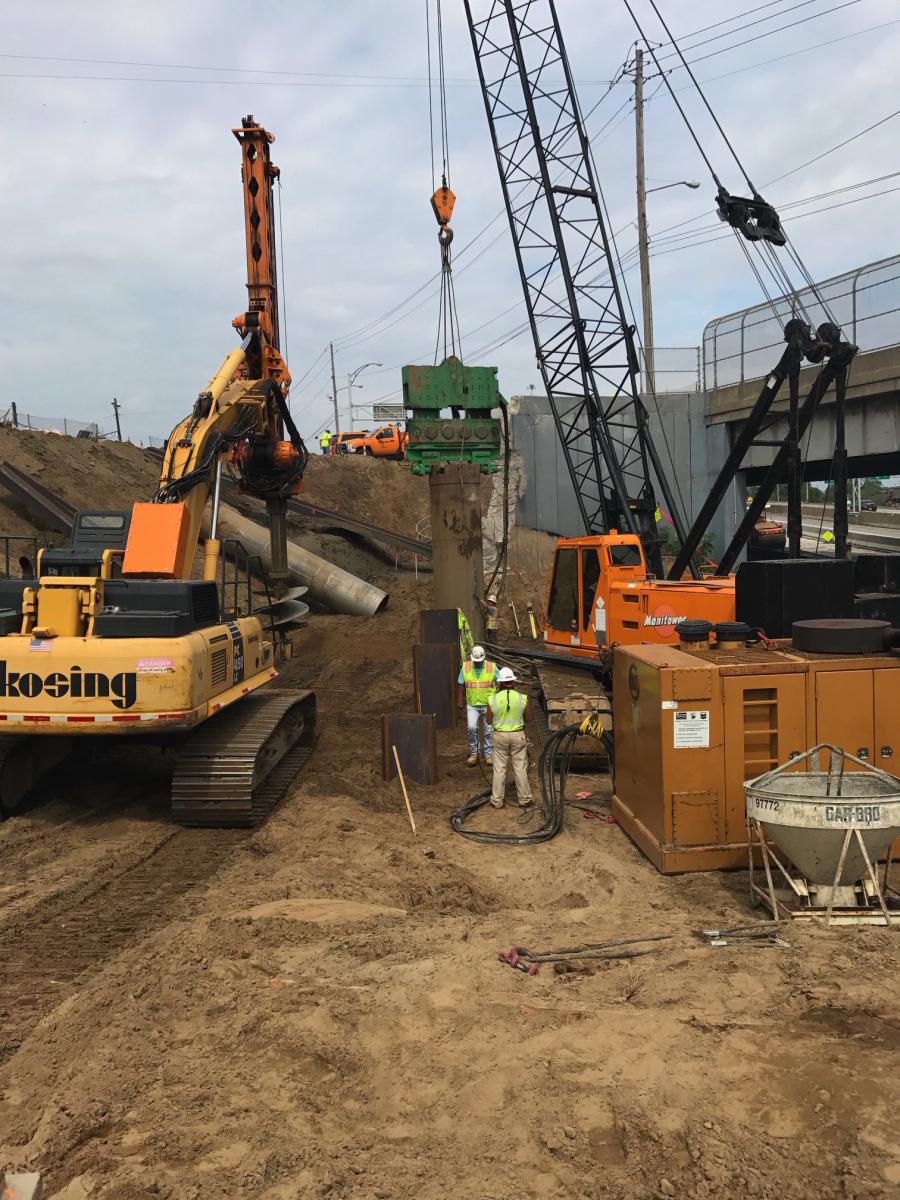 Unlike other nearby projects, there are no soil issues on this one.

“We're working in sandy conditions, which for our purposes,” said Weaver, “has been very helpful. Nothing has come up that has really halted the project, but the biggest challenge for me has been getting through all the requirements for getting the beams under production. These are monstrous beams, so just getting them produced to getting them trucked here, which has not occurred yet, is a challenge.

“They were too big for our manufacturer in Decatur, Indiana, to haul here,” he added. “They had to outsource for trucks to carry them here and the supplier was only able to come up with a couple of trucks capable of hauling them, and we had to set up a lay down yard in close proximity to the project.”

The delivery trucks will be needed to help with installation. Weaver's team has already assembled the personnel and equipment to off-load the beams.

“Things come up and you have to be ready to adjust,” he said, noting that while bringing in crews and equipment is not a problem, the work site is confined, which creates its own difficulties.

Kokosing and ODOT are streamlining some coordination issues for this project in light of all the ongoing work, but this has not affected the road construction, which is fairly straightforward.

For the utility relocations, seven of the eight companies are cooperating with Kokosing, and the situation is improving with the eighth as the project progresses.

Kokosing and E.L. Robinson have excellent relations with the ODOT team for the project.

“They have been receptive to ideas and minor tweaks,” said Weaver, “but there has been nothing major since the drawings have been released for construction. The ODOT staff have been excellent to work with and we have a relationship that goes back several years. I have been on a couple of projects with them and we trust each other, so it works.”

“Linder has been spearheading the construction out in the field,” said Weaver. “It's a challenge to build as it's a 65-degree skewed bridge, and he's hit a home run on it so far. Mesick runs two or three jobs for us remotely and has been instrumental in helping to spearhead all of the design and some of the construction.”

The amounts of steel, concrete, asphalt, sand, and other debris that crews are removing is still being determined, as are the new materials for the project. The steel beams have been sent to local recyclers and the sand, which is much sought after, has been picked up by companies that wanted it.

“That worked out for us,” said Weaver. “We didn't have to look for places to take our material.”

Darrell Grimwood is Kokosing's primary onsite head mechanic, and Weaver noted how Grimwood and his crew are keeping the fleet in solid shape.

“We haven't had any major equipment issues on the job and everything that we have had so far has been minor,” he said. “It's broken windows from demolition, flat tires on backhoes and some blown hoses on hydraulic lines. Demolition is tough on equipment if you're not careful.”

Kokosing purchases and rents equipment from dealerships such as Ohio Cat, the Columbus Equipment Company, United Rentals and Sunbelt.

Weaver noted the original construction work was well done and that his crews have to be careful when dealing with the older brick manholes and sewers in the area.

The recent heat wave had crews starting at 6 a.m. instead of 7 a.m. to avoid some of the hot temperatures and ensuring that there was plenty of bottled water available on site. Pallets of water were delivered to meet the need, and an ice machine was installed outside Weaver's office.

“We told people to take a break if they needed one and go into an air-conditioned truck if they needed to cool off,” he said, pointing out that the equipment operators have air-conditioned vehicles. “The people that we were worried about were the carpenters and laborers. The crews were preached to every morning about safety in these extreme conditions. Our goal is always zero incidents — job site and company-wide — and so far so good this season. We have plans if something goes wrong, but the goal is zero and we preach that daily.

“We dedicate the first 15 minutes of every morning to discussing the plan of what we are trying to accomplish that day and the hazards associated with it,” he added.