ODOT's $116M South Side Mega Fix to Complete Next Spring 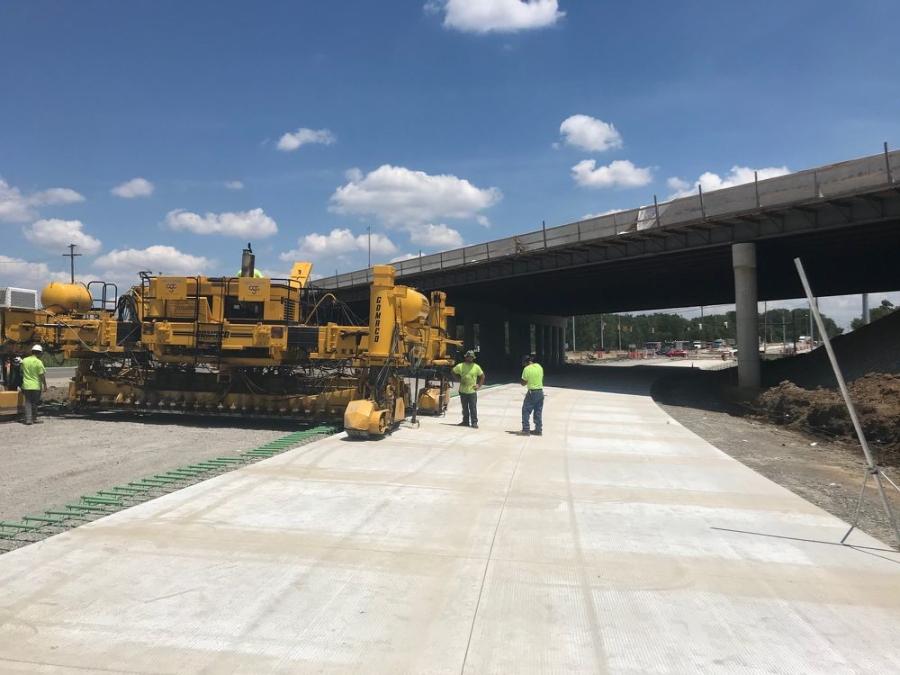 “Once we get to a rough grade, we cement stabilize and fine grade it, and then put a cure on it. It’s a five-day cure for the cement and with that, there is a lot of planning,” said Tim Cunningham, S&S’s project manager. (Ohio Department of Transportation photo)

The Ohio Department of Transportation's (ODOT) two-phase, $166 million South Side Mega Fix project in Columbus, an initiative awarded to Shelly & Sands Inc. (S&S), will be delivered in April/May 2021.

The $126 million project is reconstructing and adding a lane in each direction on I-71 between Stringtown Road and I-70; reconfiguring the I-270/71 southbound interchange; replacing 10 bridges and erecting two new ones; and building three noise walls. 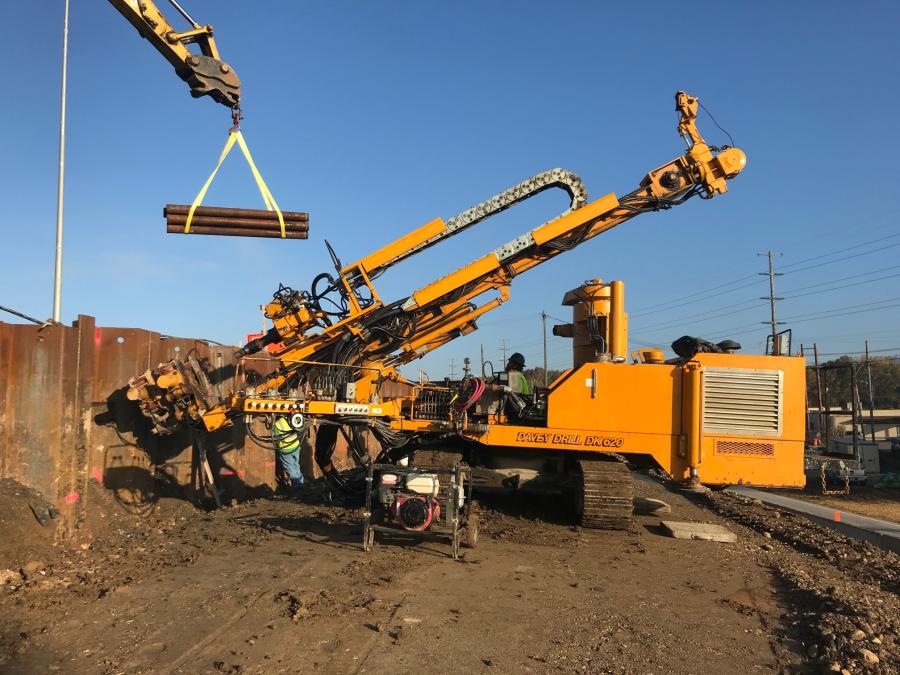 "A project of this scale can seem unending at times, but we are nearing the finish line," said Breanna Badanes, ODOT's public information officer of Central Ohio.

Tim Cunningham, S&S's project manager is very satisfied with the progress of the work, which was temporarily impacted by COVID-19, which led to several hundred bridge and wall crew members being laid off for 30 days.

"Right now, we've got a completion date for the end of year, however, due to specification restrictions and not being able to lay top course asphalt through the inclement weather, that has pushed our scheduling to next spring," said Cunningham. "We've been on a seven-day work week schedule continuously since 2018. This project has required a lot of double shifts. Over the three-year period, starting in 2017, it has probably been 60 percent 24/7 work."

The work area encompasses 13 lane mi. of highway, including six on I-71.

"The soils have been fairly decent — they're rocky and not a lot of bad soils surprisingly as about two miles pass in a flood plain," said Cunningham. "Four times in the last three years, the U.S. Army Corps of Engineers put up the flood gates as part of the city's flood protection and twice the I-71 northbound and southbound have been shut down in the middle of the project due to flooding at the top of the intersection."

Peak days had up to 120 S&S and subcontractor employees on-site, with between 35 and 50 currently. They have accomplished many benchmarks, such as completing all 12 bridges; six retaining walls; miles of new lanes and reconstruction of existing ones; and other structures.

Equipment, heavy and light, has been essential and key pieces have been cranes for the bridges and dozers and trackhoes for the excavation.

"We have 12 to 13 dozer and trackhoes — Cat, John Deere, Kobelco and Komatsu — running around the project," said Cunningham. "They are moving material. If you take a six-mile, six lane highway, you can break it down into five different sections and each section kind of becomes its own job. It's just moving material from one place to the other and getting rid of them. On one occasion we had six trackhoes in one section swinging at the same time. Machine controls have been essential to help meet specifications and we have GPS, UTS and ATS."

Excavation for the new lanes and reconstruction of the existing ones was continuous in order to clear the area for the placing of a chemically stabilized subgrade. 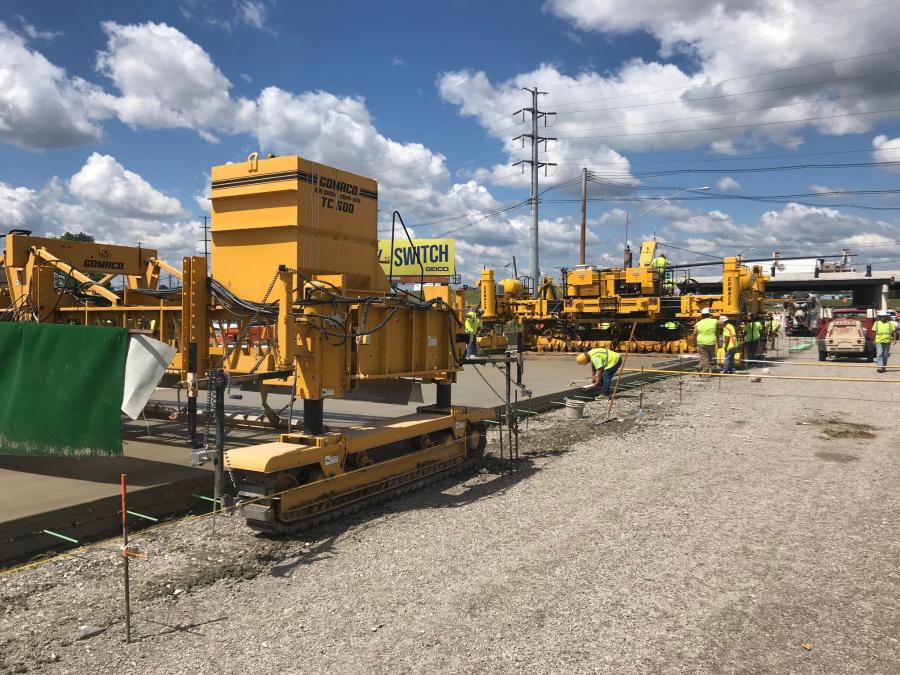 "When you have a big section, you chemically stabilize the whole work space prior to putting any underdrain or stone base," said Cunningham. "You have to let that sit for five days and nobody can be on it. We may have a spread of 15 to 18 guys doing this and we have them go to another area. Once we get to a rough grade, we cement stabilize and fine grade it, and then put a cure on it. It's a five-day cure for the cement and with that, there is a lot of planning."

Removal of the excavated materials has been efficient as they have been placed in two old quarries on either side of the project that are being filled to reclaim the space.

The last of the bridges was completed last June. Ten were reconstructed, and two were new ones.

"We had multiple span and slab bridges and most were pretty similar in construction types, lengths and widths," said Cunningham, who pointed out that the construction of the bridges began with the middle section. "We then did all the excavation and road prep, followed up with 14,000 lineal feet of new median barrier wall. This allowed us to switch traffic to the middle of I-71 and build the outsides of the bridges."

Several of the bridges at the I-270 interchange retained parts of their substructures.

"They were torn down to the piers and the pier caps were rebuilt and minor repairs were done on the abutment structures," said Cunningham. "We then rebuilt the superstructure, placed the beams and poured the decks."

Bridge demolition was done at night with the help of lane closures. Much of the demolition process was based on slab removal, which were cut into squares and removed. 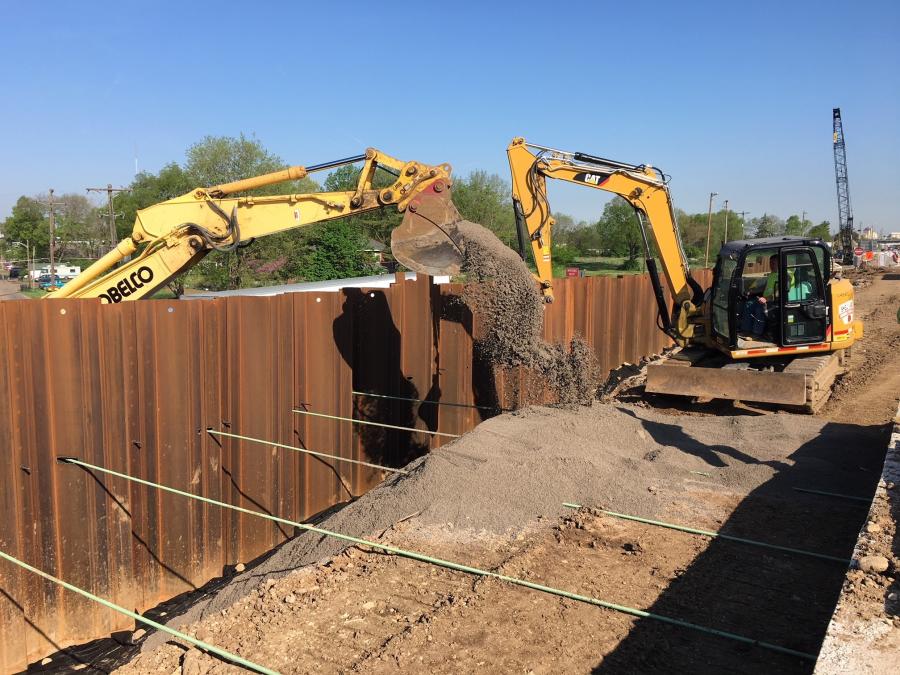 For the bridges north of I-270 — those approaching downtown — traffic was detoured so that the demolition operations could be done without interruptions. Some bridges were built in 90 days, while others took 110 to 120 days.

"All of the concrete ramps were total closures or half phased construction," said Cunningham. "We had four different ramps, that were not phased and each one was a 30-day total closure."

Four noise walls were built along residential areas — a mile north and south of the of the I-270 and I-71 interchanges – in 2018.

‘We prepped the working bench and started drilling shafts on one end," said Cunningham. "It was a continuous cycle with the drill crew completing the shafts and the next crew would come in behind with trackhoes and cranes setting the post and panels."

"As part of this we had a 700-foot section of Army Corps floodwall to build between 2017-18," said Cunningham. "This came with its own unique challenges because it had federal oversights, ODOT funding and city of Columbus maintenance. From design to construction, there had to be agreement from the different entities. It took a lot of cooperation and we did not take this lightly as flood protection comes with life and limb possibilities."

The ramp reconstruction and retaining wall construction were often linked and phased construction helped to maximize the efforts of the crews. With the help of lane closures, it allowed crews the room to work ramp and wall work simultaneously. Tiebacks for the ramps were drilled through the sheet piling, with some being 45 ft. long.

Cunningham is joined by Ryan Porter, Eric Griffin and Faour Alfaour with countless others in the field to make up the management staff required on this large of a project. 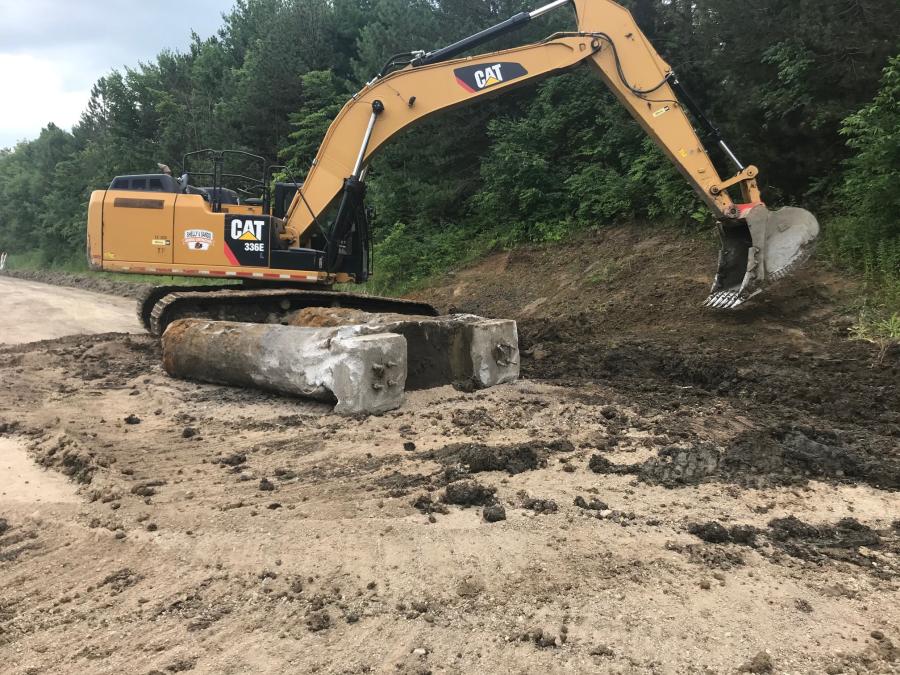 "We have all been here from the start," said Cunningham. "We have a lot of great help in the field and Eric is keeping track of the budget and administrative issues."

The major subcontractors are The Ruhlin Co. for building part of the bridge structures; Complete General for electrical/ITS communications and concrete paving; Griffin Pavement Striping for permanent and temporary striping; Paul Peterson Co. for maintenance of traffic; Cembase for cement stabilization; Lionel Construction for aggregate base and asphalt; M.P. Dory for permanent signage; and Lake Erie for temporary and permanent safety features.

"Most repairs, as long as the material and parts are available, are done either the same day or overnight so that we do not have any down time," said Cunningham. "We have an extensive maintenance and mechanical division that makes sure we have very little down time. Our company is adamant about getting equipment fixed and back in service. One of the major items we had here was buckets breaking concrete — they tend to experience a lot of wear and tear. We also had some broken undercarriages with the tractors [dozers] as some of them had to travel back and forth along a stretch of three miles." 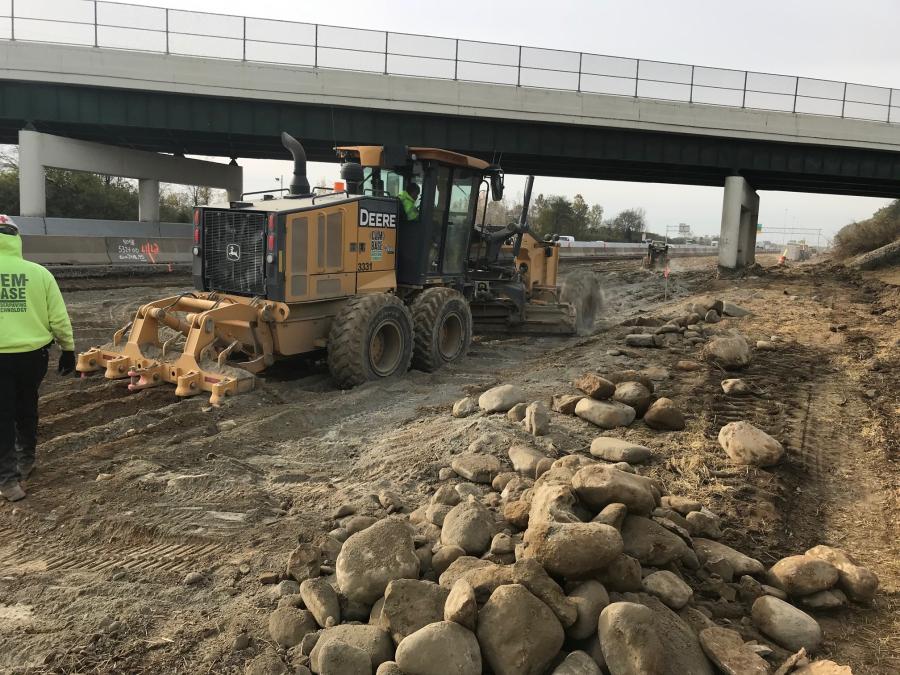 "Buying the volume of equipment that we do, they're obviously happy to help us as we are such a good customer," said Cunningham. "Due to the size of this job, we've been able to demonstrate some of the new technology and machines. They wanted us to run Komatsu equipment with integrated machine controls and John Deere and Cat models — dozers and motor graders — with machine controls. They wanted live feedback so that they could develop better and faster machines."

The testing included universal tracking systems (UTS) where the machines are controlled with a robotic survey instrument.

"The tightness of the tolerance on the UTS is supposed to be ¼-inch and under and GPS tends to be an inch plus or minus," said Cunningham. "GPS is really good for getting a rough end fast and then it's time to bring in the road graders with UTS and cut everything down to be fine-tuned."