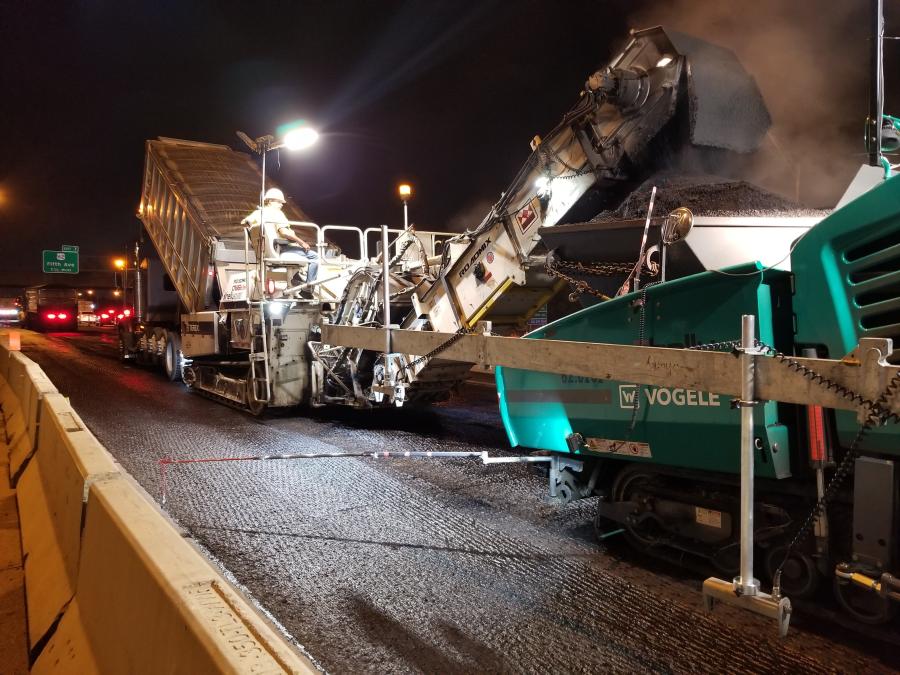 The Ohio Department of Transportation is coordinating construction of a SmartLane with an interchange improvement project at I-670/I-270 and U.S. Route 62 in Columbus.

Crews from Complete General Construction (CGC) have been working since June on the Ohio Department of Transportation's (ODOT) $61 million Interstate 670 SmartLane and resurfacing project in Columbus.

The project will not only upgrade road and bridge infrastructure, but also, through new signs and technology, reduce congestion and quicken the drive times of commuters and truckers.

The SmartLane is the first to be built by ODOT. The road improvements are expected to be completed by the spring, with the new cameras and overhead signs to be installed in the summer of 2019, and the lane to be opened to traffic in the fall. 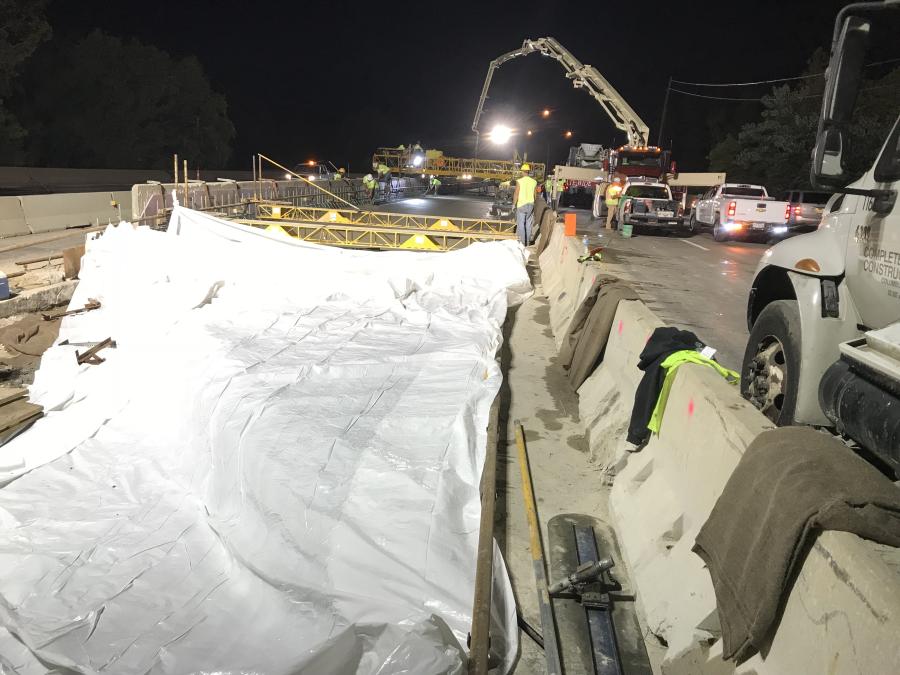 The 7-mi. work zone covers the area from just east of I-71 to I-270 and John Glenn International Columbus Airport. To have the SmartLane ready for traffic, ODOT is rebuilding the shoulder lane on the left side of eastbound I-670 to ensure the pavement is safe and passable.

"It's an extra travel lane that is only open during certain times when drivers need congestion relief most," states an ODOT press release. "The ‘SmartLane' is an ODOT pilot project and will be available for eastbound-only I-670 drivers from 3:30 to 6:30 p.m. Monday through Friday."

The speed limit will be 45 miles per hour when the SmartLane is open. Approximately 117,000 vehicles use this section of road daily.

"The appeal of the SmartLane is the low cost and low impact that's associated with widening a highway," noted ODOT Director Jerry Wray. "This is repurposing the shoulder which already exists and making it available to drivers when it is needed most — in this case for the afternoon drive home. This project is a smart investment for Ohio. By investing in state-of-the-art technology, we are able to decrease congestion in this corridor without the high costs and long timelines associated with highway widening."

The SmartLane is expected to reduce traffic delays by 25 percent.

Overhead message boards will be placed every three quarters of a mile to alert drivers when the SmartLane is available and whether any hazards, such as accidents or disabled vehicles, lie ahead.

The lane will be open during off-peak times only if traffic conditions warrant a need for it.

"It might sound counterintuitive," said Wray, "but studies have shown traveling at slower speeds actually keeps traffic moving better because it avoids the ‘stop and go' conditions which can cause more accidents. Ultimately, we believe the combination of the extra travel lane and the reduced speed limits will allow for a more reliable commute for travelers along that route."

Thirty-six high-definition cameras will be installed along the SmartLane, allowing ODOT's Statewide Traffic Management Center to monitor the SmartLane 24/7 and ensure there are no vehicles or debris in the lane before it opens to traffic, Wray added. 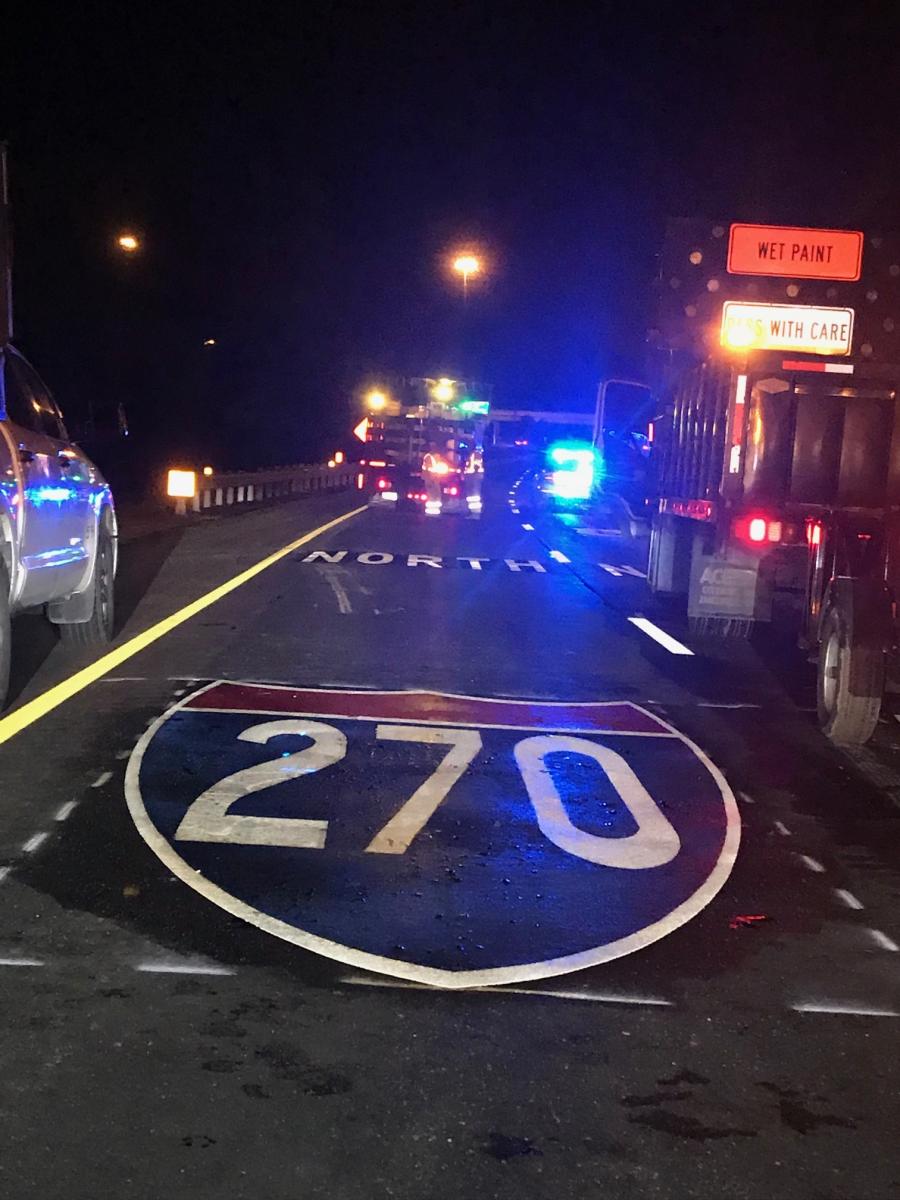 ODOT is coordinating construction of the SmartLane with an interchange improvement project at I-670/I-270 and U.S. Route 62 that involves the construction of two ramp bridges, as well as a noise wall, and is expected to be completed in the summer of 2020.

Serving as the lead, Burgess & Niple designed the new infrastructure and SmartLane plan. The company was assisted by Gannett Fleming, which covered much of the ITS design, signage, and operational concepts; and by TranSystems Corporation for much of the road work.

"The resurfacing operations are happening at night as we need to bring a major roadway down to one lane for the work," said ODOT Construction Engineer Brian Gable. "The crews are double-shifting as much as possible on the remainder of the work."

The new road infrastructure has a minimum lifespan of 20 years, and the design did not have to deal with major utility relocations, which has allowed construction to flow more smoothly. ODOT is working with two major power utilities — American Electrical Power Co. and the city of Columbus's municipal power corporation — to set up the power access points.

"We're coordinating with them early on to make sure all the power devices for the entry signs, cameras, and lighting were set up ahead of time, and it's borne some fruit during the construction and is compressing the schedule," said ODOT Design Engineer Anthony Turowski.

Complete General Construction, whose project manager is Jeremy Gilbert, is expected to complete the resurfacing operations in November, with interchange improvements to ramp up immediately. Motorists passing through the area are often under the impression that two separate projects are ongoing.

"The limited space for the work and access into the work zone is a challenge," said ODOT Construction Engineer Zac Amnah. "We're not taking any extra right of way and are pretty much confined to the median area. Some of the sections of median barrier wall are staying in place, and crews are limited as to where they can cross over, get through, and turn around. This accounts for the night work, but they're also doing work during the day due to the aggressive schedule to have the resurfacing completed this year and meet the interim completion date."

Working at night is never easy, and to ensure the safety of the crews and motorists, police are on hand for lane closures and specific areas, extra lighting has been brought in, and variable speed limits are enforced.

"Hopefully people will pay attention to them and slow down for the guys," said Amnah, "giving them more time to react while driving." 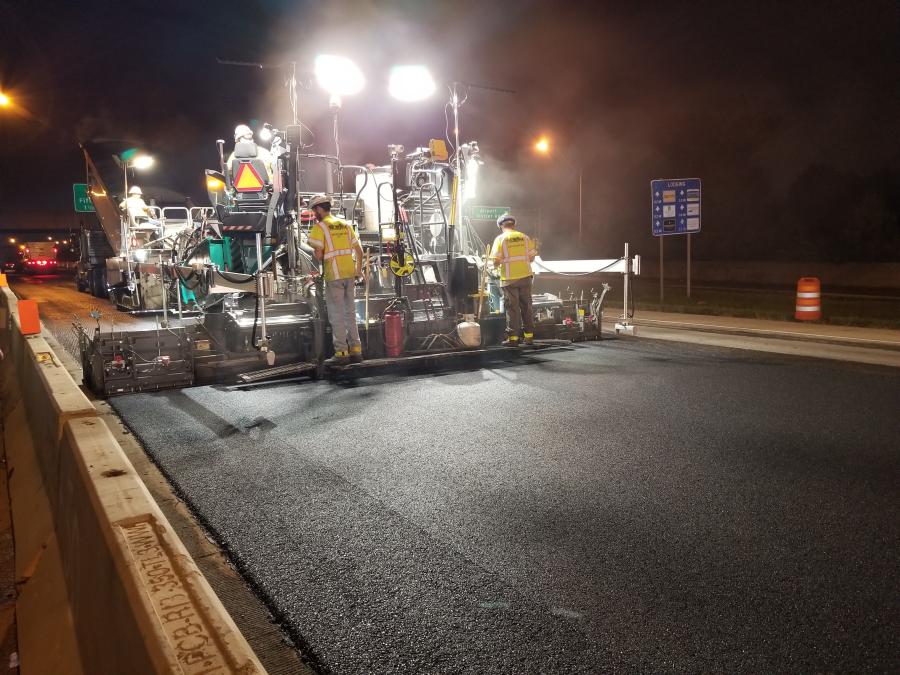 The resurfacing, which began in July, covers four lanes in each direction and started with the westbound lanes.

"There were no major challenges," said Amnah. "The resurfacing of the ramps brings in some interesting maintenance of traffic items, but nothing out of the ordinary. They recently started resurfacing the eastbound lanes and that has been more of a challenge because that is where the majority of the other work for the SmartLane and the rebuilding of the inside shoulder, which requires a lot more coordination between CGC and Shelly Company, the asphalt contractor."

Gable noted that cold joints on the pavement were limited to one for three lanes.

"That required Shelly to pave two lanes at the same time and they used a 24-foot-wide paver to pave lanes one and two for the length of the job," he said. "They did it in four nights and came back for lanes three and four. They did an excellent job and the public will appreciate the 19-year-old pothole-filled pavement being repaired to enjoy a smooth ride." 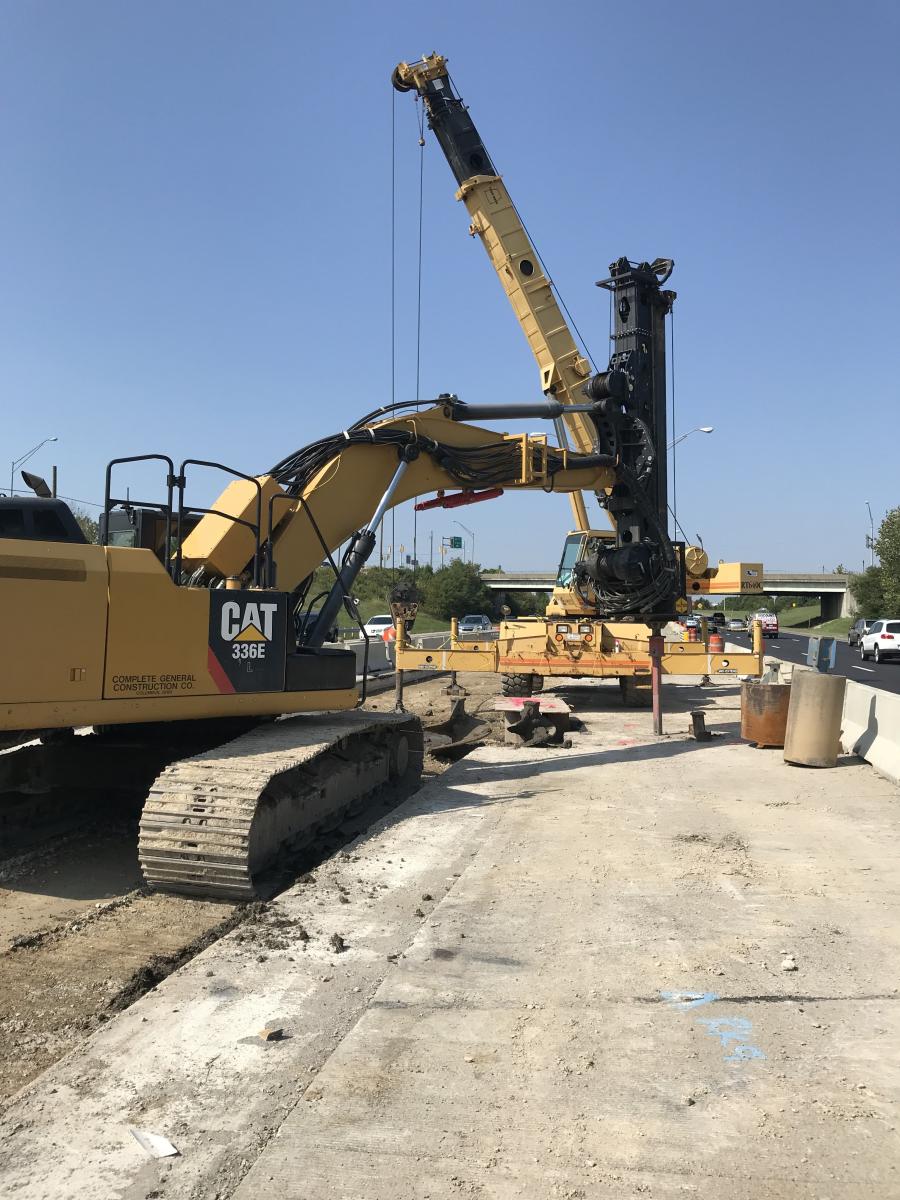 "We've already begun some of our excavation and embankment for a lot of the offline ramps that we can build without affecting traffic," said Gable. "We hope to get a lot of the embankment work completed so we can get some of the pavement placed before the turn of winter. The interchange work is planned to be completed the same day that the SmartLane is going to open."

Given the large number of vehicles that travel through the area every day, Amnah said, maintaining traffic flow will be a major challenge during the work on the interchange.

"The new ramps at the interchange will provide a huge relief for the traveling public, eliminating an outdated weave design," he added.

The installation of the new signs and cameras will begin next summer and be completed next October. The goal is to install the large signs as close to the opening date as possible to avoid confusing motorists.

"Most likely the signs will be installed first and then the cameras which will hang off the trusses over the signs, but it's a very close timeframe," Amnah said. "To support all the new devices and ITS equipment, we have to run more fiber-optic cable and power services. We have cable out there and we're expanding on it." 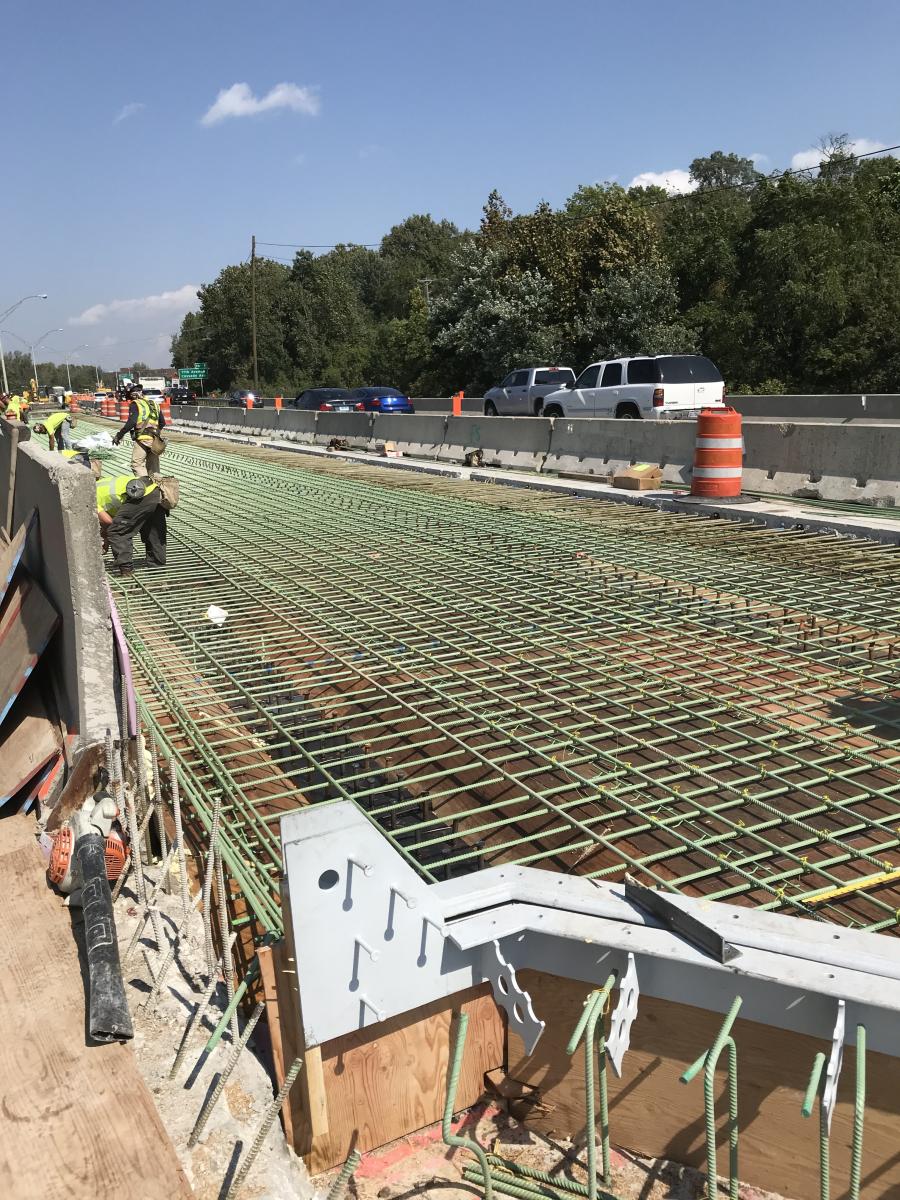 "We have a good working relationship with Complete General," Amnah said. "They do a large amount in central Ohio, and so some of the ODOT staff is familiar with their staff. We have offices that are in close proximity to one another, so the communications lines are always open, which really helps as far as keeping the project first and on track.

"We're still in the infancy stages of the project, so I'm sure we'll have a lot of lessons learned as the project progresses. We've been lucky in being chosen to be part of the pilot project for SmartLanes."

"The whole project is a learning experience and people are learning on the job figuring out planning and design," Gable added. "We're utilizing standard construction practices to construct a new design and innovative concept. We've had a few interns on site and taught them a lot of new concepts, as well as the basics — deck pours, pavement installation, and reconstruction."

This also has been a learning experience for district office staff as new technology is being embraced by ODOT.